Carmel by the Sea - Fairy Tale Cottages of Hugh Comstock - The Studio, Our House, Storybook Cottage 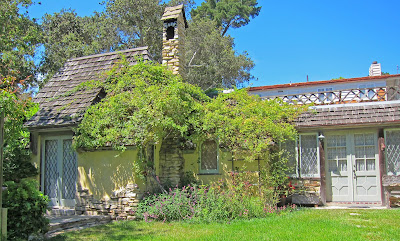 As Hugh Comstock's design business grew he and his staff outgrew their office in his personal residence "Obers." So Hugh built a studio on the lot next door beginning in 1927 with the first structure placed on the western side of the lot.

Comstock built "The Studio" in three distinct sections between 1927-1937, continuing with the Tudor "Fairy Tale" style of many of his earlier cottages, but adding two new design elements to his exterior, leaded glass and Carmel stone, lending a country element to his whimsical style. 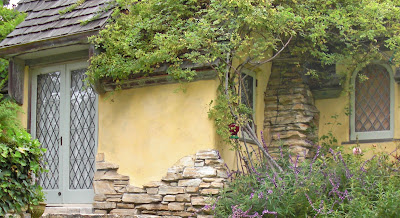 The entrance to the studio was directly across from the French wood doors on the east side of his personal residence. Surely a well worn path was traveled back and forth. 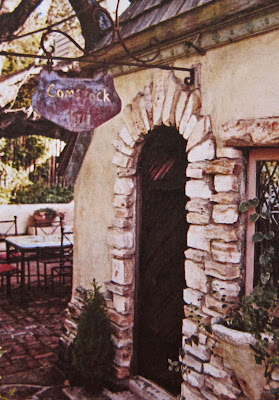 The front entrance is not visible from the street.  This is a picture of the entrance taken from the January/February 2008 issue of Cottage Living. A  wrought iron sign proclaims its historical origin, "Comstock 1927." 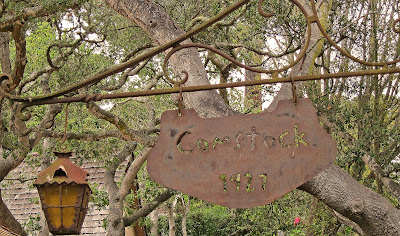 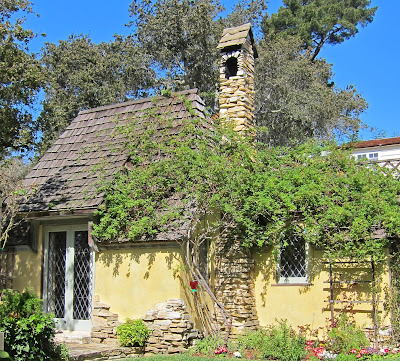 His signature Carmel stone fireplace anchors this section.  Emulating the pitch in the roof, the chimney is topped with a steeply pitched, gabled spark arrester, here examined closely by one of our squirrel residents. 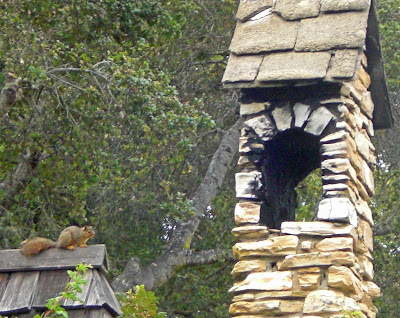 Continuing with the charming county look of leaded glass, Comstock added a "hyphen" to the studio in 1936.  This glazed hall gallery features a pair of tall diamond-pane leaded glass windows supported by a low Carmel stone wall flanking a pair of wood and glass double doors. 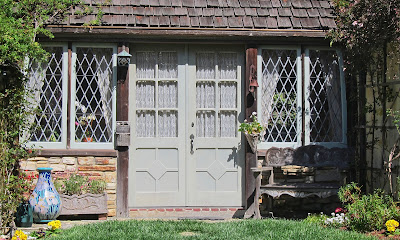 A year later an office was added off the hall gallery to complete the third section of "The Studio."

After Hugh's unexpected death in 1950, Mayotta made "The Studio" her residence, remodeling the interior of the studio/office in 1953 to include a bedroom, kitchen and living area, and adding a garage with entrance on Santa Fe. 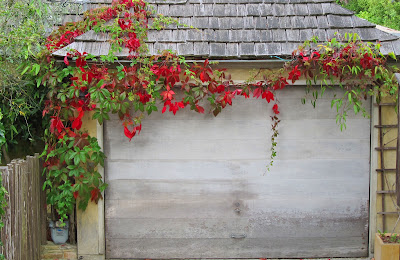 From the outside "The Studio" remains much as it looked in 1988 when it was still owned by the a member of the Comstock family, Harrold Comstock. 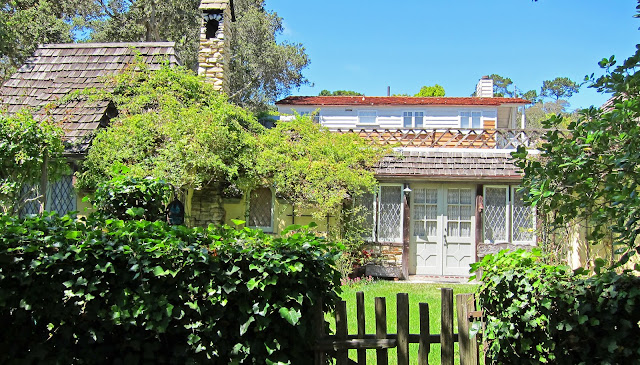 as well as the lovely 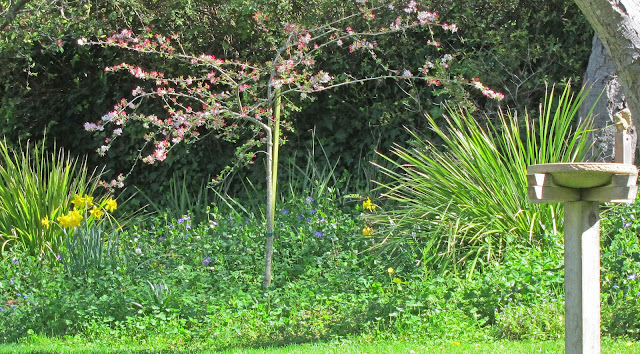 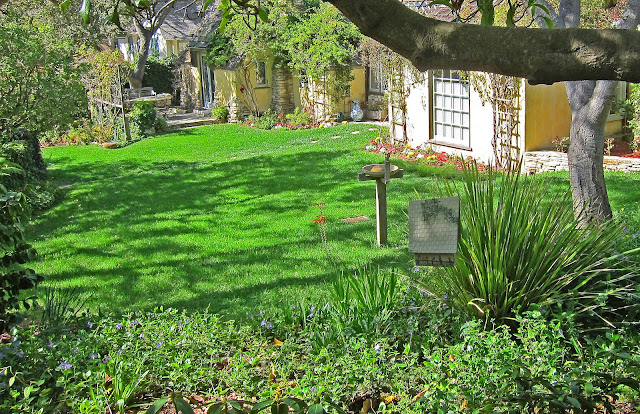 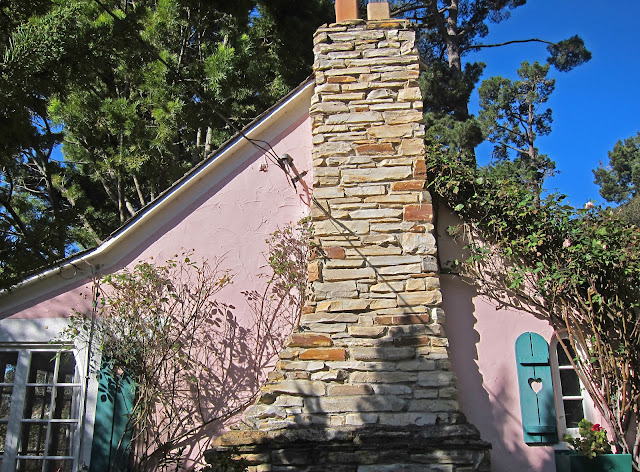 Our House was designed by Hugh Comstock in 1928 for Elizabeth Armstrong and built for $1,900. From Santa Fe depending on the time of year you will be able to see different parts of this cottage over the grape-stake fence and high shrubs. 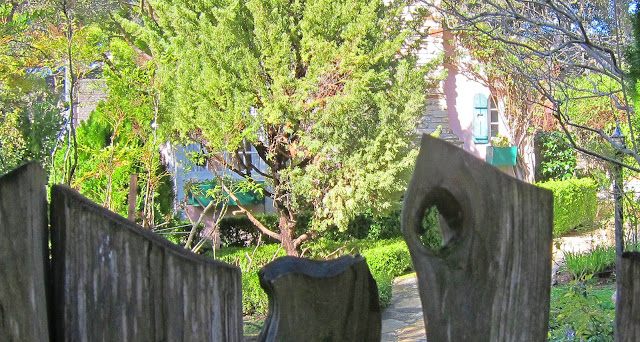 But one window always seems to be visible, winter, spring, summer or fall, the narrow arched three-light casement window with braced wood shutter of the same shape with heart-shaped cut out. Spot this and you will know you have the correct house. 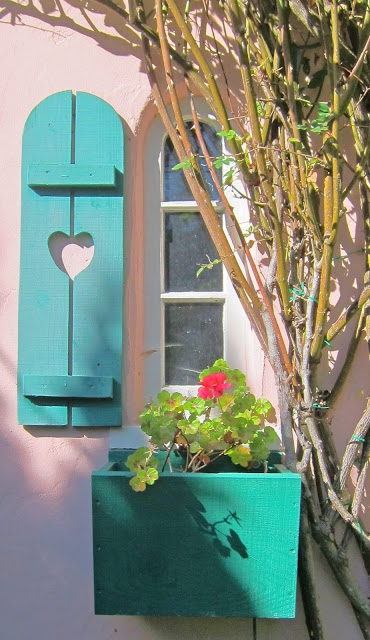 Comstock's architectural signature can be seen in the steeply pitched roof and Carmel stone fireplace. The exterior wall cladding is textured stucco over felt, instead of burlap. Similar to Hansel, the front entrance to Our House is positioned on the side of the property. 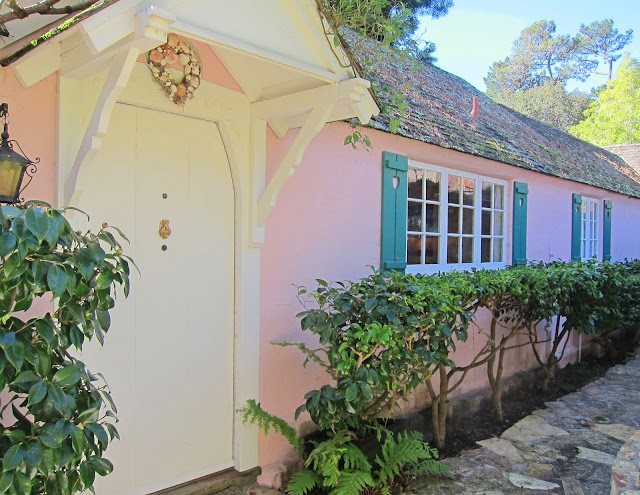 In 1940, Hugh Comstock added a small guest house to the SW corner of this property. Later in 1958 the main house and the guest house were combined by adding an extension to the original kitchen. 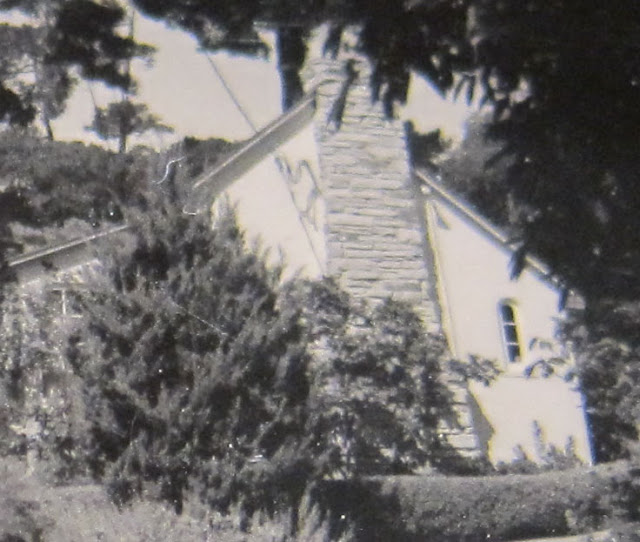 This picture taken by Colin Kuster in 1988 shows that the cute wood shutters with the heart shaped cut out were a modern addition to the property.
A "twin" to Our House was built by Comstock in 1929 on Casanova and Palou named Sunwise Turn.
"Storybook Cottage"
Santa Fe 2 SE 5th 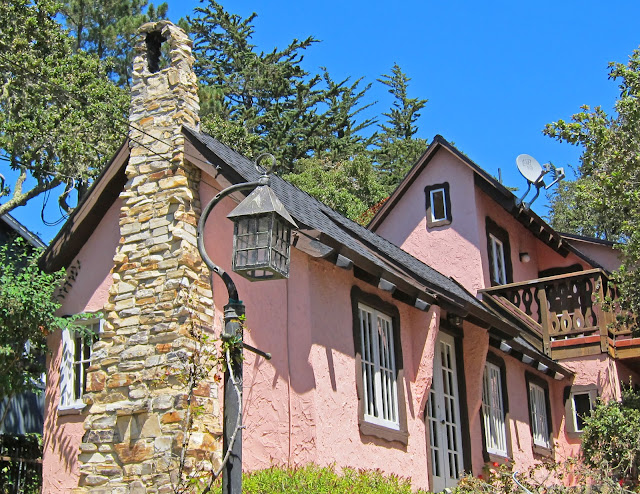 Until recently I called this house the "Browne House."  Clearly not because of its color, but because the property was originally owned by T. M. Browne, the father of Mayotta Browne Comstock.
The current owners Harry and Jane Herbst
have aptly named  their quaint property
Storybook Cottage. 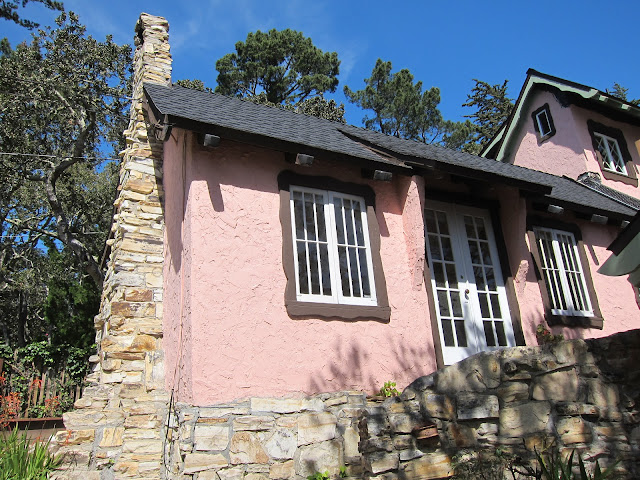 Back in 1926, T. M. Browne purchased a permit to build a small cottage on the property.  Instead he built a small shed structure on the eastern side of the lot.
In 1941, the widow of  T. M. Browne transferred the property to her daughter Mayotta and son-in-law Hugh Comstock.

Shortly after the transfer, Hugh Comstock built a 384 square foot cottage at the front western edge of the
property with his signature high pitched roof, Carmel stone chimney, 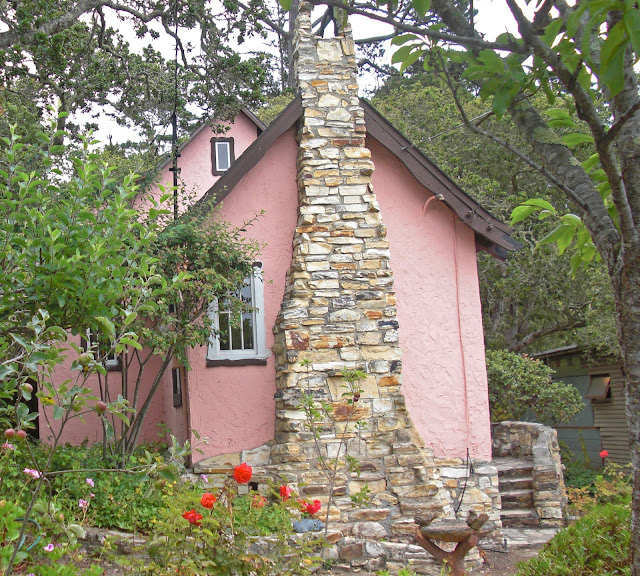 front door with door hood
facing away from the street, 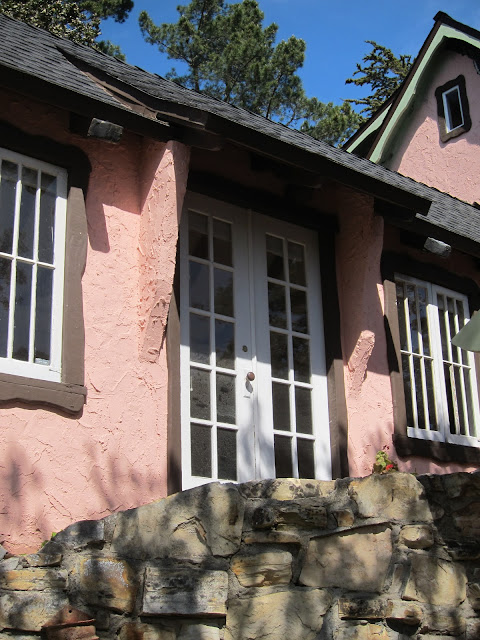 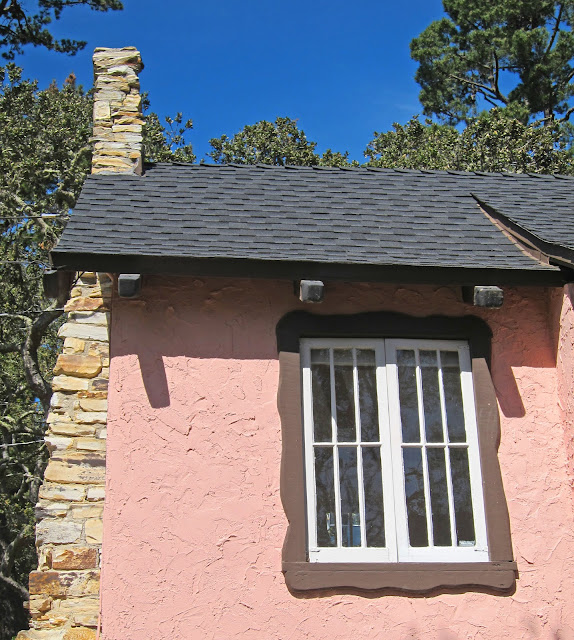 Joan Bard owned the property in 1987 and added a two story addition to the rear of the property.
According to a report written in 2012 by historian and author Kent Seavey, it was found that "though Ms. Bard employed materials and finishes somewhat similar to those found on the original building, 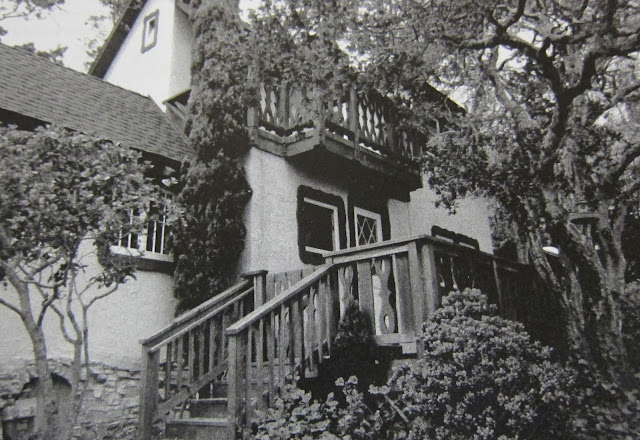 her use of vinyl windows with snap-in diamond muntins and the overstated decorative wood railing contributed to the property's loss of historical integrity. 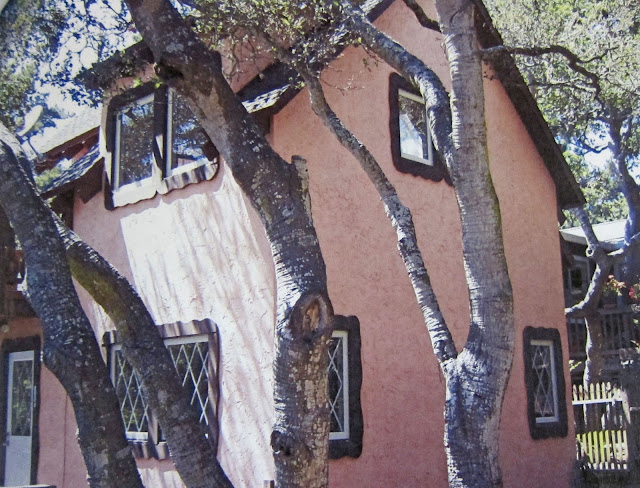 Mr. Seavey's report recommended that the subject property did not meet the "necessary criterion for listing in the California Historical Register.  Nor does it meet the criterion established by the City of Carmel-by-the-Sea for inclusion in the Carmel Historic Resource Inventory, and therefore cannot be considered an historic resource." 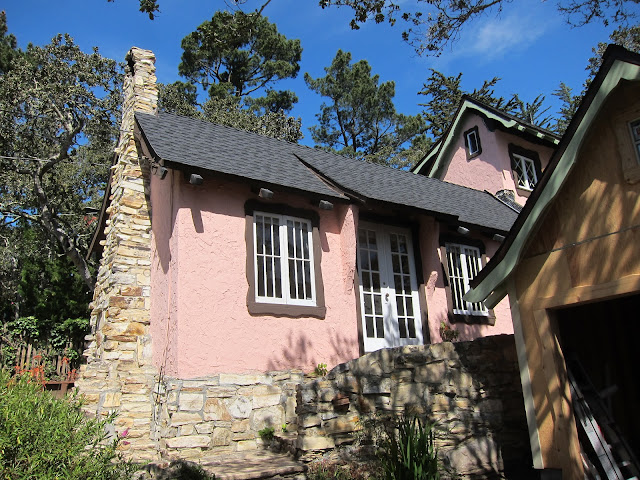 Currently this home is being renovated, smoothing out the connection between the 1987 addition and the original 1941 cottage. 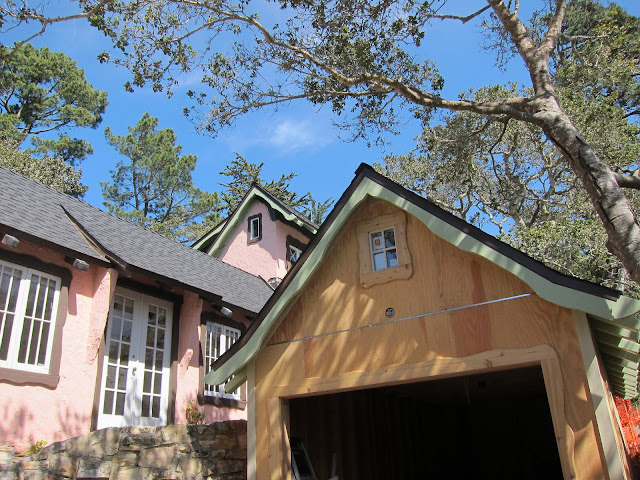 ﻿
A garage is being added to the southwest corner of the property.  It will have similar characteristics as the residence, hand-carved wood window casings and roof edge, high pitched roof line, and exposed rafters, yet it will be differentiated by being built with board and batten instead exterior stucco cladding as in the original structure.
MAP 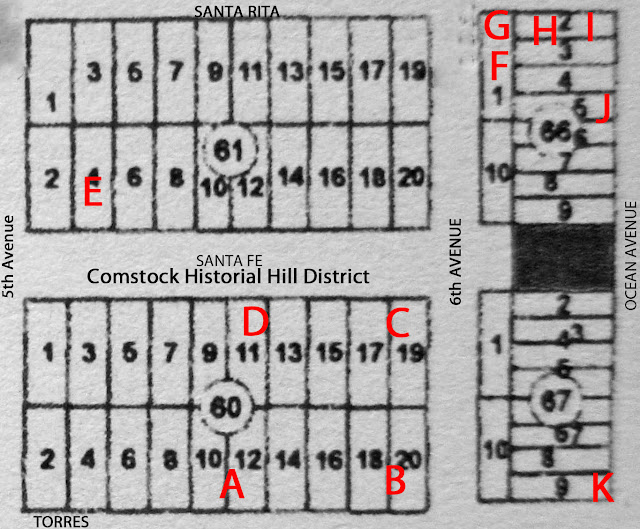 The homes mentioned in this blog are C) The Studio, D) Our House, and E) Browne House (Storybook Cottage).  ﻿

I have embeded a pdf map of the Historical Hill District which includes "addresses" and photographs of all 11 Comstock cottages not just the ones discussed in this blog. You may print this off and use as your own personal walking tour here PDF Map .

Black and white photo dated 2010 of the wood rails on the second story addition to the "A Storybook Cottage" from City Hall Records.

Posted by Adventures of A Home Town Tourist at 3:45:00 PM