Skip to main content
Labels
Posted by Adventures of A Home Town Tourist May 16, 2013


Robinson Jeffers attained his Bachelor of Arts degree at 18 years of age from Occidental College in 1905.  After summer vacation he immediately enrolled in graduate school at the University of Southern California, signing up for classes in Spanish and Oratory, a course in Old English and having time for just one more class he decided to brush up on his German and signed up for Miss Borthwick's Advanced German where the class would read and discuss the classic German legend, Faust.

Una Call was born January 6, 1884 in Mason, Ingham County Michigan.  Her father, Harrison Orlando Call was from New York and her mother Isabelle Lindsay from Michigan. Isabelle's father, who lived with the Call's, was from Ballyminstra, Killinchy, County Down, Ireland.  It was her Irish grandfather, who taught Una how to play the organ and encouraged her love of music.  She was also well educated and encouraged by her family to go to college.

At age 17, Una left her hometown to attend the University of California at Berkeley.  It was here that she met a young attorney, Edward "Ted" Kuster. Within the year they had married. 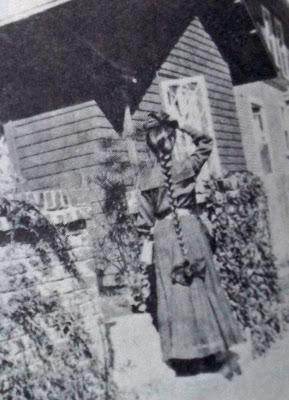 The newlyweds moved to Los Angeles, where Ted set up a law practice.  Una adjusted well to the roll of a successful lawyer's wife, she enjoying all of the upper-class social events that went along with the title Mrs. Edward Kuster.
Una was intelligent and outgoing, tiny, a little over five feet, and had beautiful chestnut hair that she wore in a braid either long down her back or in a big loop around her head. But having married young and having left Berkeley before completing her degree, Una soon became restless with being just Mrs. Edward Kuster.  Ted adored Una and was very accepting of  her desire to return to college to complete her bachelor's degree, as long as it did not interrupt the busy social or private life that they had together.
With Ted's approval, Una returned to school in 1905, this time at the University of Southern California.  She registered for Miss Borthwick's Advanced German and it was in this class that Robinson Jeffers met Una Call Kuster.

To Canidia
Nay, is there need of witchcraft still,
Witch-girl, to  break my stronger will?
Of strange enchantments, and of song
In far pine-forests all night long?
What use is there of woven charms?
Have I not held you in my arms?
And is there stronger spell than this,
The burning memory of your kiss?
Or mightier charm can you prepare
Than the long wonder of your hair?
But tho' the madness of desire
Burn body and spirit as with fire,
Tho' the wild longing never cease
To seek out you and find out peace,
I, being more strong than you, no more
Will set my feet to seek your door. (1)

"Una had an unusual and dangerous combination of gifts:  brains, beauty, and distinction.  Because of these gifts she attracted both men and women to her, making a lasting impression on all who knew her and exerting a strong influence on most of them.  There were few men who met Una who were not attracted to her.  Una herself was conscious of their interest with almost naive wonder, occasionally testing her power with doubting hesitancy in mild flirtations.

This was the young woman, then, who had attracted Robin.  It was not long before he was walking Una home from college, carrying her books like any other young man with his girl.  That their interest in each other at this time was very deep is doubtful.  When Nettie Carter, Una's neighbor and good friend, asked her about Robin, Una answered, "Oh that's just a young man who attends my German class.  He's very gifted linguist and writes very immature verse."" (2)

After the completion of his first year in graduate school, Robin accompanied his parents back to Europe where they lived at the Pension Tiefenau, and Robin entered the University of Zurich.  With instruction mostly in German, he took courses in Philosophy, Old English, Dante's Life and Work, and, just because he had some extra time, Spanish Romance Poetry.

Then Robin became restless. His parents had hoped he would stay in Zurich, but in September 1906, when he had completed these courses, he returned to the United States.

His mother Annie's physician had promised Robin a job back in California  translating German medical papers, which Robin accepted.  With this, Robin's interest turned to medicine and he decided to enter medical school in the fall of 1907, at where else, the University of Southern California.

In 1908 Una Call Kuster received her Bachelor of Arts degree from the University of Southern California, and immediately began work on her master's.  By this time, Robin and Una  were seeing each other almost daily.  Together, they were developing mutual interests and sharing social experiences. Neither ever considered including Una's husband Ted in their adventures.  In fact  it had now been three years since Robin and Una met, and not one time in those three years had Una ever invited Robin to her home to met her husband.

By 1910, Una's marriage to Ted was in trouble and Robin and Una's relationship had clearly moved beyond friendship. But Robin, thinking ahead, knew that he would not be able to support a family with Una until he received his inheritance from John Robinson's estate in 1912, so he made the decision to put distance between himself and Una hoping that this would extinguish, or at least cool, their growing love for one another. So although Robin had distinguished himself in his medical school courses, and was offered a job teaching Physiology in Dr. Lyman Stookey's medical clinic, he left medical school and along with his parents moved to Washington State where he switched gears again, this time entering the University of Washington to study Forestry.

But this too would not last, less than a year into his studies of Forestry, Robin would be restless again.  Leaving Washington in the summer of 1911 and returning to Southern California, he spotted Una behind the wheel of her roadster in a busy intersection less than half an hour after arriving back in Los Angeles. This chance meeting reignited their love affair.


In one last effort to try and save her marriage, Una agreed to travel by herself to Europe for a few months.  She and Ted had hoped that this time apart from each other, and Robin, would help them sort through their marital problems. Una left for Europe April of 1912.

It was that same year that Robin received his inheritance from John Robinson. With Una "out of the picture," he decided to use some of this money to publish his first book of poetry, Flagons and Apples. It is in this book that Robin wrote of his turbulent on again, off again love affair with Una.  He sent a copy to her with this inscription on the inside cover:  "To my little Una, my dearest, Who is very responsible for this book but not to blame for it. R. J." (3)

That same year, while Una was in Europe, her husband Ted met sixteen year old Edith Emmons, who was working in her fathers law office in Bakersfield. Though Ted was twice her age a courtship began between the two of them before Una returned from Europe later in the year.

In 1913 divorce was scandalous, but in the case of Una and Ted, it was eminent.  The legal dissolution of their marriage became official August 1, 1913. The following day, August 2, 1913, Robin and Una were married, and so were Ted and Edith.