"Perhaps the whole thing had been something of a whimsical experiment, but the popular reaction was one of tremendous enthusiasm.  Many came to marvel and be charmed by the Doll House.  In a community that at the time was predominately made up of rough summer cabins, this imaginative and unusual effort on part of the Comstock’s set off a spark of civic pride.  Carmelites liked the way the Doll House fit into the native surroundings.  It sprouted out of its curved chalk rock foundations amongst the pines, as much as a part of the woods as the mushrooms and toadstools."  (Carmel In Story and Picture, Carmel Architecture, by William Albee, 1958)

Historic Name: The Doll House
Common Name: Hansel
Architectural Style: Tudor (Storybook substyle)
Torres Street 4 NE of 6th
Block 60 Lot 10 and 12
In August 1924, just four months after their wedding, the Comstock's purchased a building permit to build Mayotta's Doll House on Block 60 between 5th and 6th on the northside of Torres.  They spent $100 in materials and built "The Doll House," later renamed Hansel, almost entirely themselves. 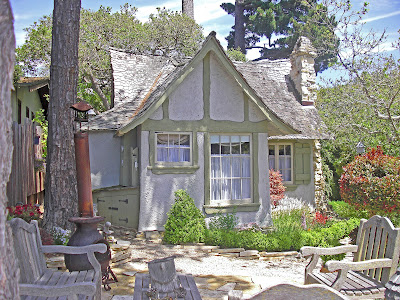 With no real building or design experience between them, they managed to fashion a perfect storybook setting for Mayotta's dolls.  They purposely designed their dwelling with no plumb-lines, and hand whittled trim boards with pocket knives to frame the doors and windows. 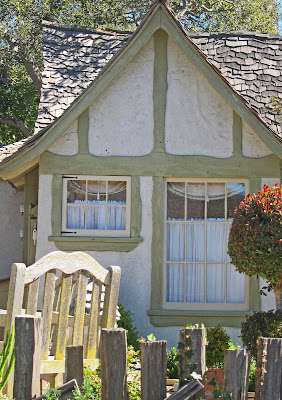 A mixture of pine needles and plaster were applied by Hugh and Mayotta using a trowel, as an artist would a brush, to burlap they had nailed over the redwood walls. The result was an uneven heavily textured surface. 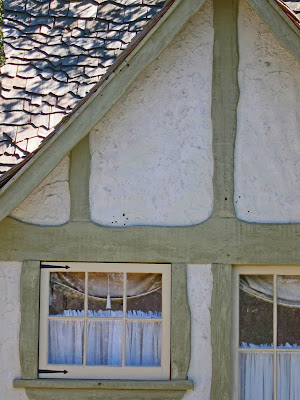 They had a stonemason build the Carmel stone chimney so it would appear "stacked" and random. 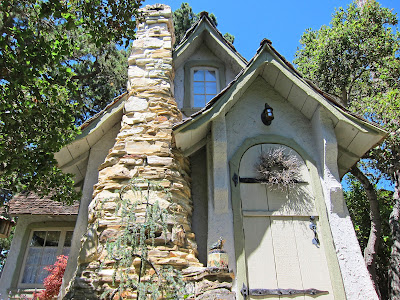 In this 244 square foot cottage, Mayotta displayed her dolls as if they were living in their own fairytale style house in the woods. 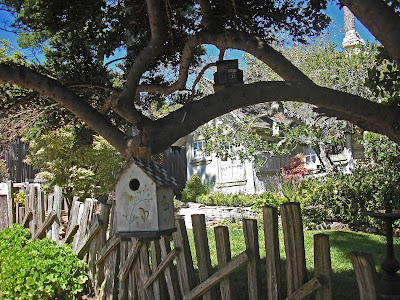 The third house designed by Comstock was Gretel which is set back from Torres Street and barely visible through the heavy growth of the garden.  ﻿ 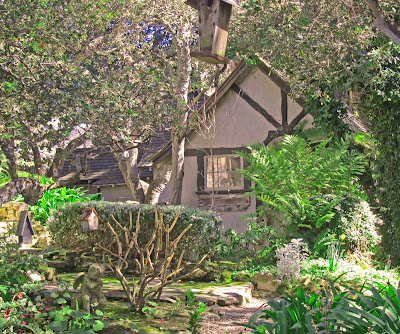 Designed as a one story building in the same style as Hansel, Gretel was built as Mayotta's office in 1925 with $400 worth of building materials. 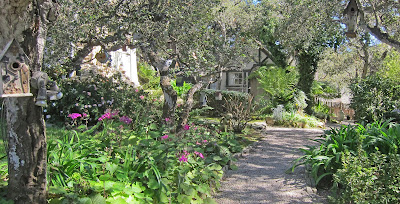 There are two gates in the fence in front of this lot.  Gretel is down the gravel path behind the gate on the right. 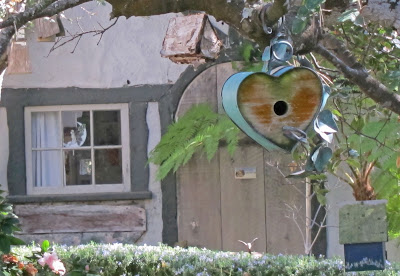 Hugh Comstock added a bedroom to Mayotta's office in 1928, which extended out of the original structure in an ell to the north east. 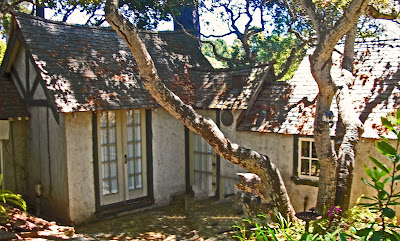 New Owners
Besides Hugh and Mayotta, Hansel and Gretel have had a few different owners.  Repairs have been made when necessary and a few additions have been added. 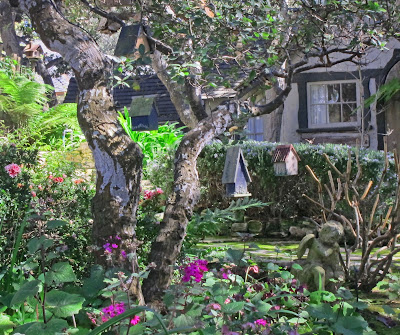 Mrs. Gardner owned the property in 1946.  The name and fairy tale charm of the two cottages  was influential in her decision to open a candy shop on Ocean Avenue named after her property, Hansel and Gretals Candies and Gifts.
Though Mrs. Gardner continued to own the cottages, she sold her candy shop in 1947 to Hyla Tillman who moved the shop to 6th Avenue and Lincoln.  Mrs. Tillman sold the shop to Peter and Mary Robotti in 1965.  The Robotti's owned the Hansel and Gretel Candies and Gifts until it closed and was replaced with an art gallery in 1998. 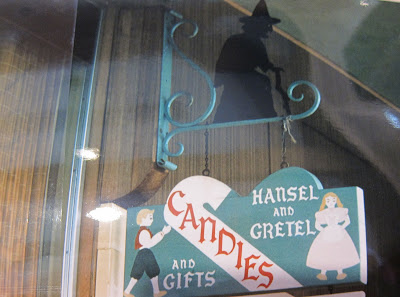 In 1949 Hansel and Gretel were owned by Mrs. G. K. Wood and Mr. H. B. Kennicott.  They hired Mr. Comstock to make a very small addition to the bathroom of Hansel and add a second bedroom to Gretel.
Joan Harding owned the property from 1962-1992 then Mr. and Mrs. Voris fell in love with the property and purchased Hansel and Gretel from Joan. 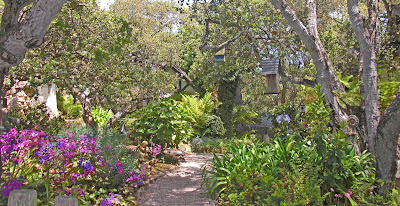 When the Vorises bought the property the landscape was considered "woodland natural."  Bobbie Voris wrote, "We rented Gretel to a recently-divorced  New Zealander whose "therapy" was gardening."  It is this woman who is responsible for the attractive abundance of flowers and shrubbery that grows on the property today. 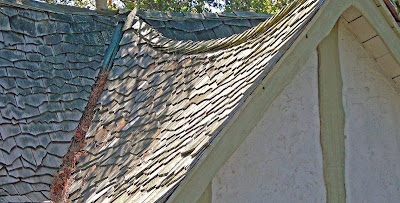 The Vorises  added a much needed cement foundation to Hansel and in 1999 replaced the original roof because daylight was visible through the aging shingles. 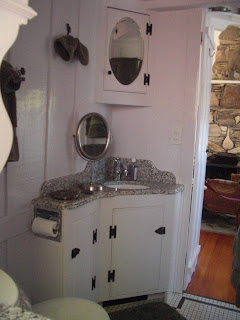 The rest of the renovations Mr. and Mrs. Voris did themselves, emulating Hugh and Mayotta.  To save space the bathtub in Hansel was replaced with a shower and a tiny space in the closet was used to increase the bedroom to a "grand" 8 by 9 foot space just large enough for a trundle bed. 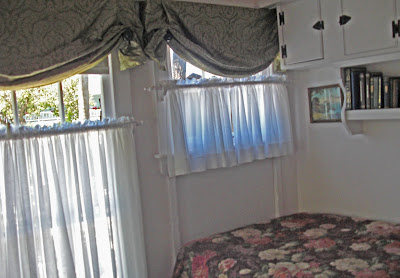 To make room for guests the unfinished crawl space and attic was opened up to create a loft with a ladder for access.  Now Hansel house sleeps four people. 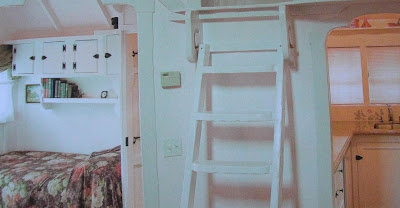 The Vorises have also added numerous bird houses to the property adding to the charm of the quaint garden setting. 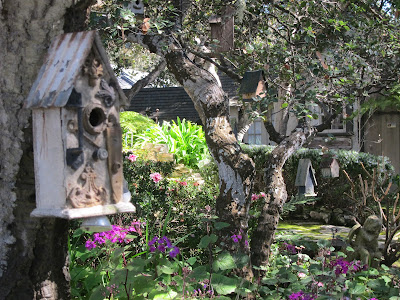 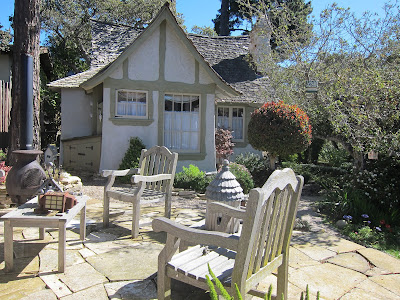 Point Lobos can be seen in the distance.

I have embeded a pdf map of the Historical Hill District which includes "addresses" and photographs of all 11 Comstock cottages not just the ones discussed in this blog.  You may print this off and use as your own personal walking tour here  PDF Map .  It is much more detailed than the illustration below. 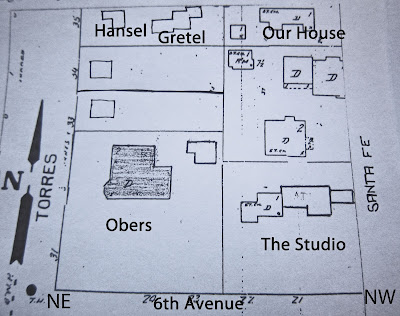