"In 1928, Eastern investor W.O. Swain convinced the Carmel City Council to allow him to develop a small, five-unit subdivision based on the English garden city plan, as Swain noted, "with a feeling of spaciousness about them, as in a park." The five houses form the largest single concentration of Comstock fairy-tale cottages left in Carmel." (Images of America Carmel A History in Architecture, Kent Seavey, page 82) 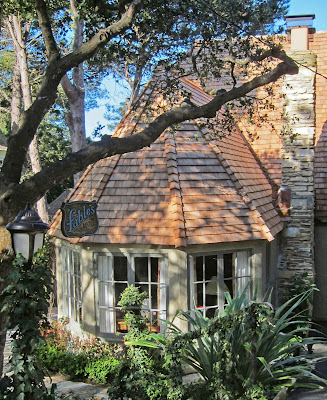 At a cost of $2,989, Fables was the fourth cottage built by Hugh Comstock in 1928, for Mr. Swain's sub-division.  All five of the cottages were built in a different style, this one with its polygonal hipped roof is French Norman style. 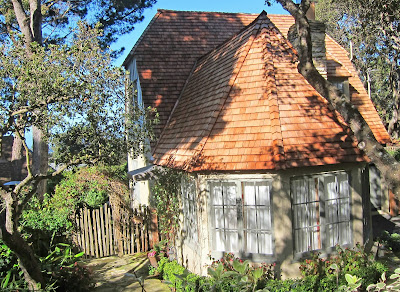 The original structure, approximately 1000 square feet was built in an ell shape. A Carmel stone chimney
anchors the north elevation. 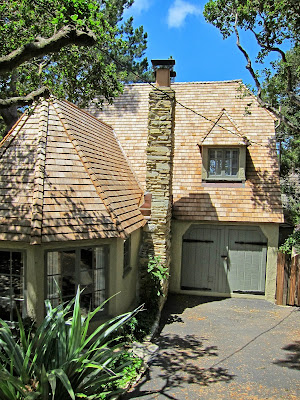 The house has changed little on the outside on the eastern elevation as can be seen from this picture taken by Colin Kuster (son of Edward Kuster and Gabrielle Young-Hunter) in 1988. Let's see, how do I explain this? Edward Kuster was the first husband of Una Jeffers.  His fourth wife, Gabrielle was the daughter of Mary Young Hunter, whom Comstock built "The Woods" for in 1927. 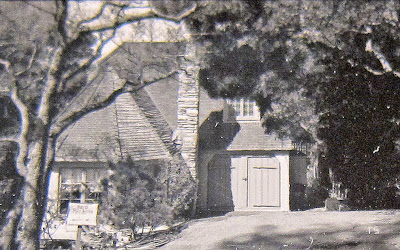 Anyway, typical of Comstock, the front entrance is not seen from the street but faces the south toward another Swain cottage,  Dolls House. 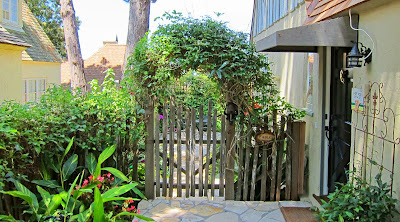 The outside porch light is vintage Comstock.
You will see these throughout the village.
When you do, know that they are
originally from the 1920's and 30's. 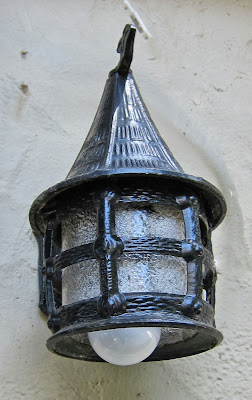 The drawing below is Comstock's
original schematic for the
southern elevation  of Fables.

Notice that all of the windows are multi-pane. 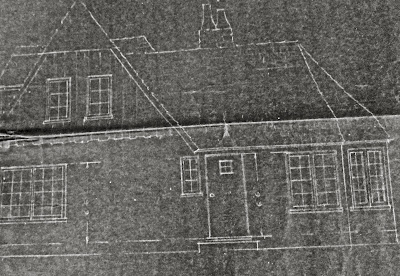 Today three of the windows on the
southern elevation are stained glass.
Two on the second floor nestled between the
signature Comstock half-timbering and 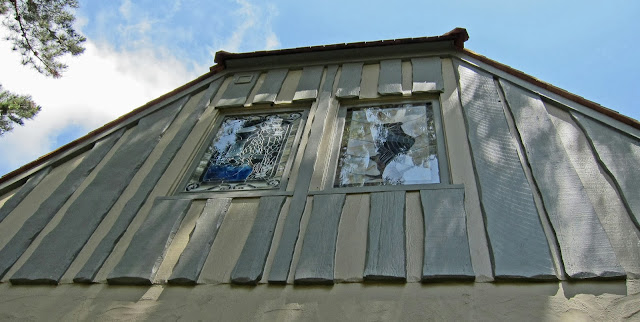 the one next to the front door. 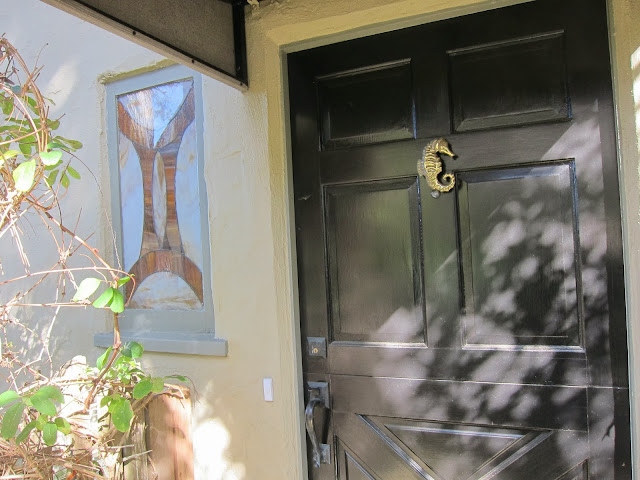 There is no record of these changes on file.

Upon entering Fables one is amazed
by Comstock's ceiling.

With no background in architecture or design,
he created cottages and fairy tale homes that have
become synonymous with Carmel-by-the-Sea! 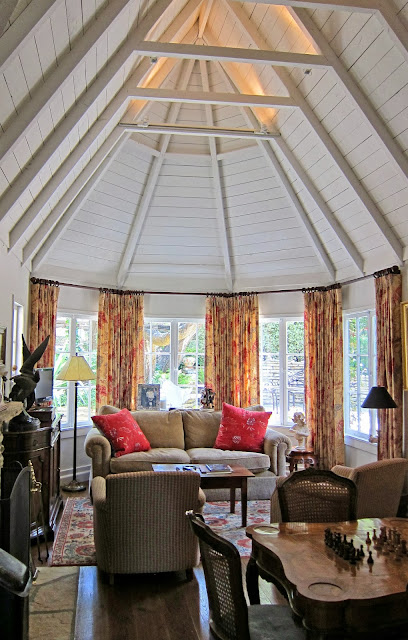 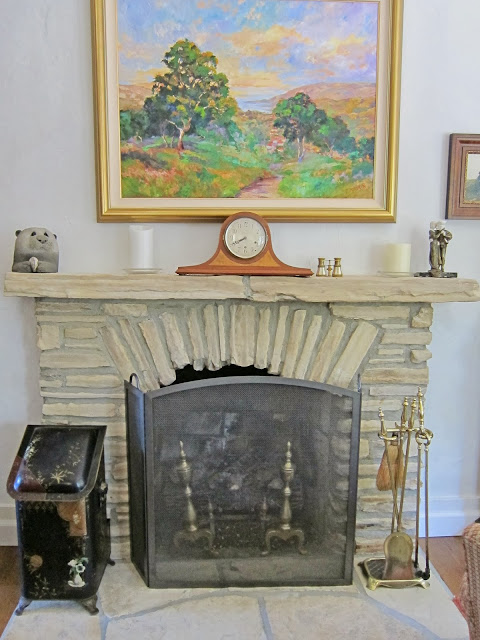 In 2012, the current owners
beautifully remodeled the kitchen, 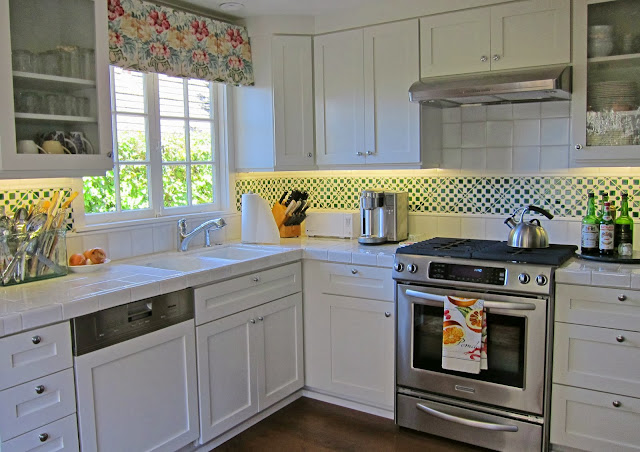 maintaining the original footprint
of the kitchen
and dining area. 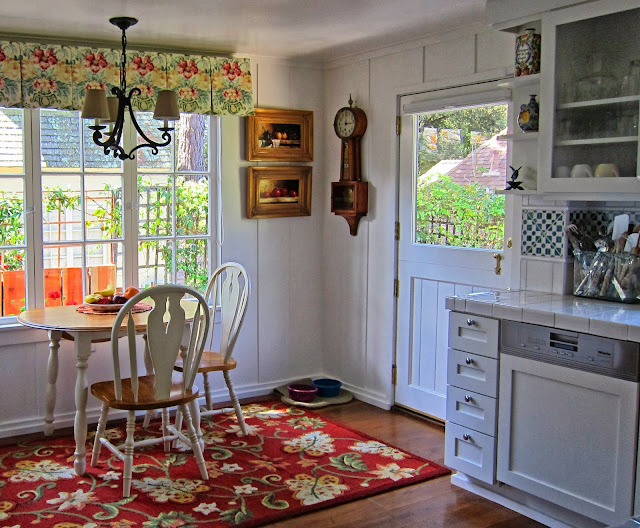 Sometime during the 1980's, the garage was converted into a den and bathroom. The current owners have updated this area, again keeping the footprint and use for the area the same, with one exception. 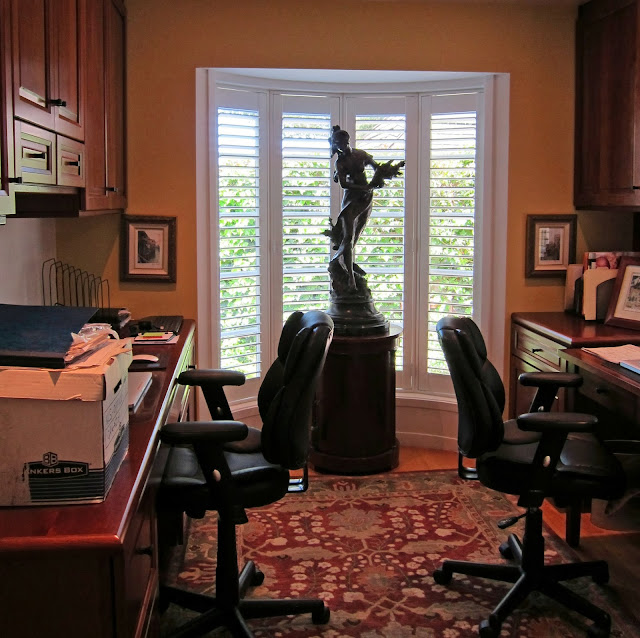 The multi-pane window in the garage/den to the west was bumped out into an oriel style.  You can see it above from the inside and below from the outside 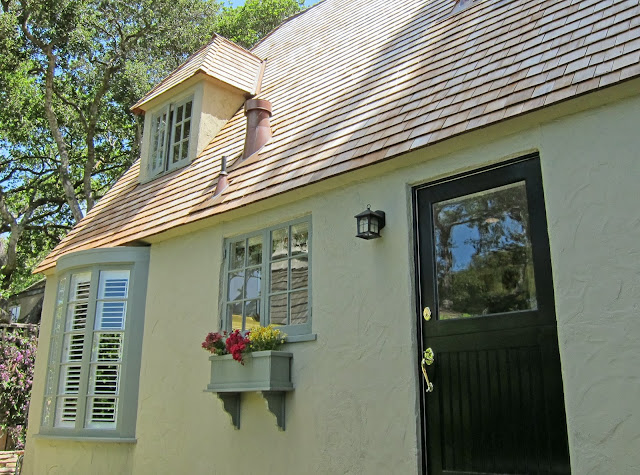 Another Comstock feature are the
flat wood balusters on the staircase 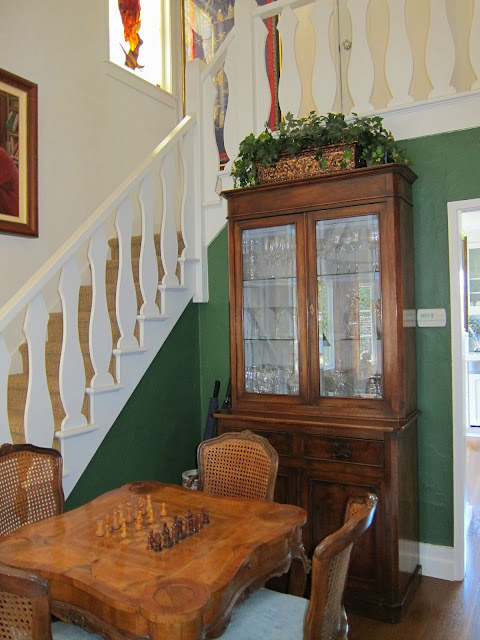 leading to the interior balcony. 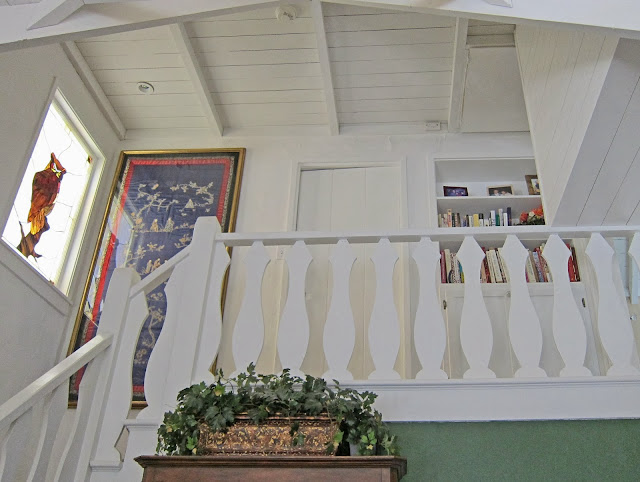 From here you can look directly
through the collar ties supporting
the ceiling, or 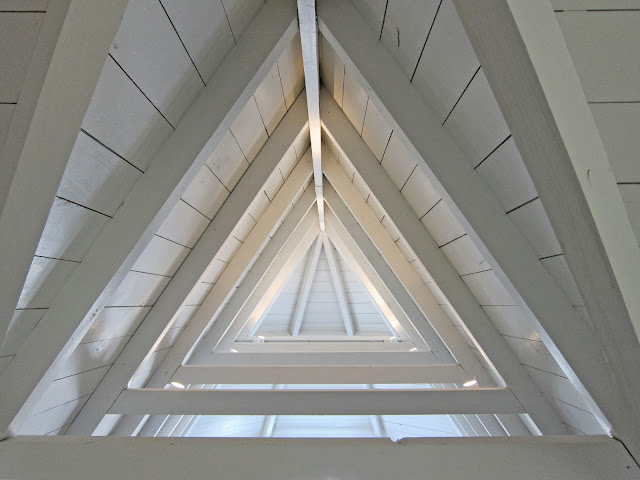 down into the living room 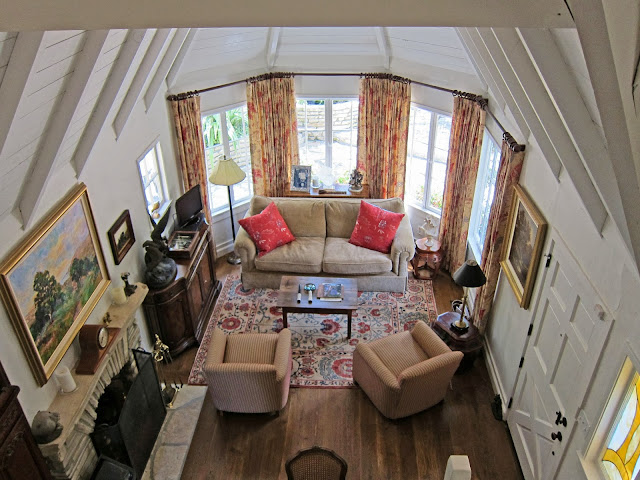 On the second floor there is one bedroom 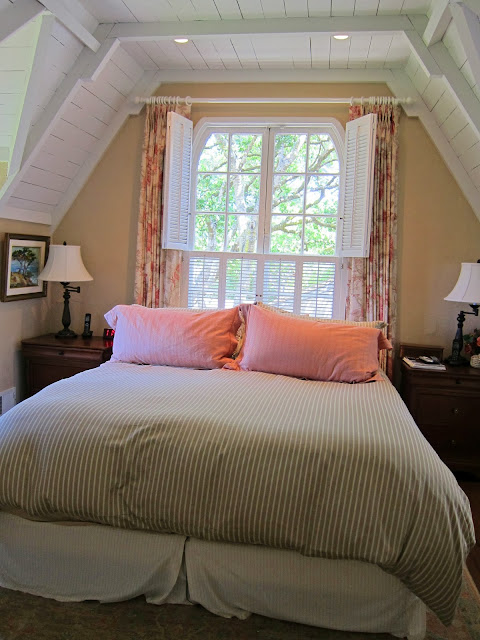 and one bath tucked into the high pitch of the roof. Here is a view of one of the three stained glass windows.  Notice that even the shower tiles conform to the roof pitch. 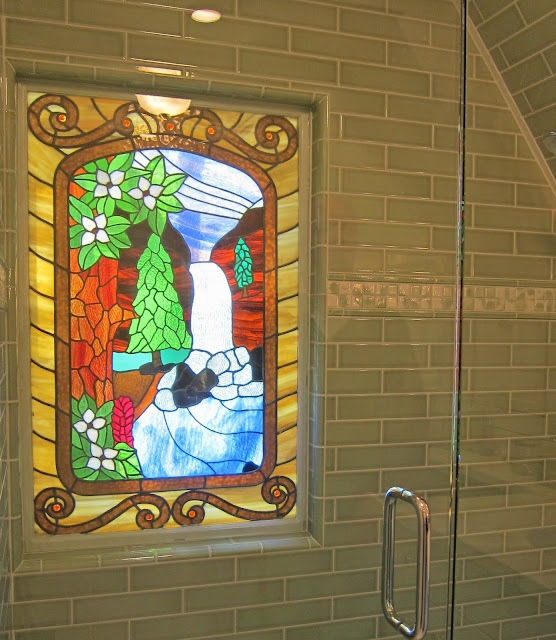 Comstock also made great use of space with the addition of windows seats.  The current owners followed his lead by adding the drawers in the wall. 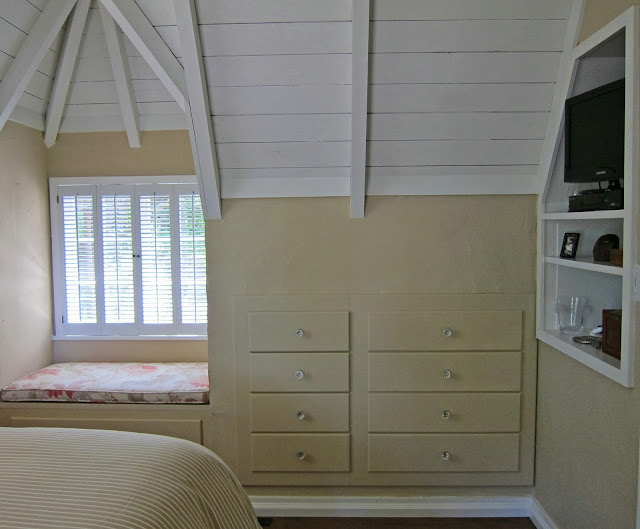 From the western bedroom window
there is a nice view of the ocean, 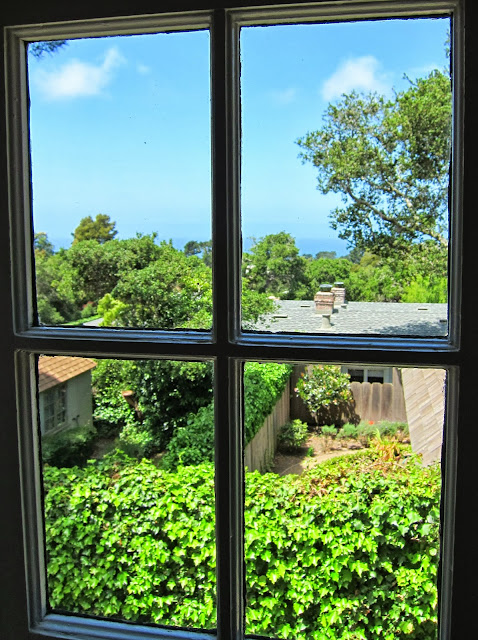 and a good view of Ocean House which Comstock
also built for Swain's subdivision. 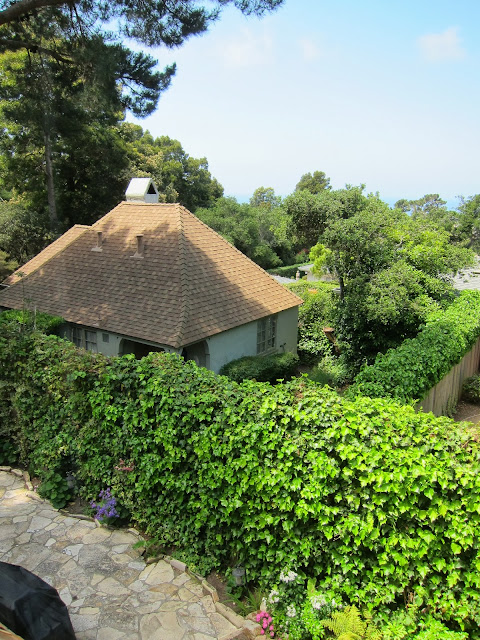 For a tour of the lovely outdoor garden of Fables please visit here.
___
Black and white photo by C. Kuster, from Harrison Memorial History Library
All other photos by L. A. Momboisse www.carmelbytheseaca.blogspot.com
Posted by Adventures of A Home Town Tourist at 11:40:00 AM