Dene Denny and Hazel Watrous, musical producers and owners of the Dene-Watrous Gallery, believed that Carmel-by-the-Sea should be the epicenter of world-class music, art and cultural expression.  In 1935 they set out to make their dream a reality by founding the Carmel Bach Festival.

The festival began as a four-day concert series at the Sunset School Auditorium and the Carmel Mission.  Now in its 77th Season, the Carmel Bach Festival features over 75 performances and free community events at 12 locations around Monterey Peninsula. 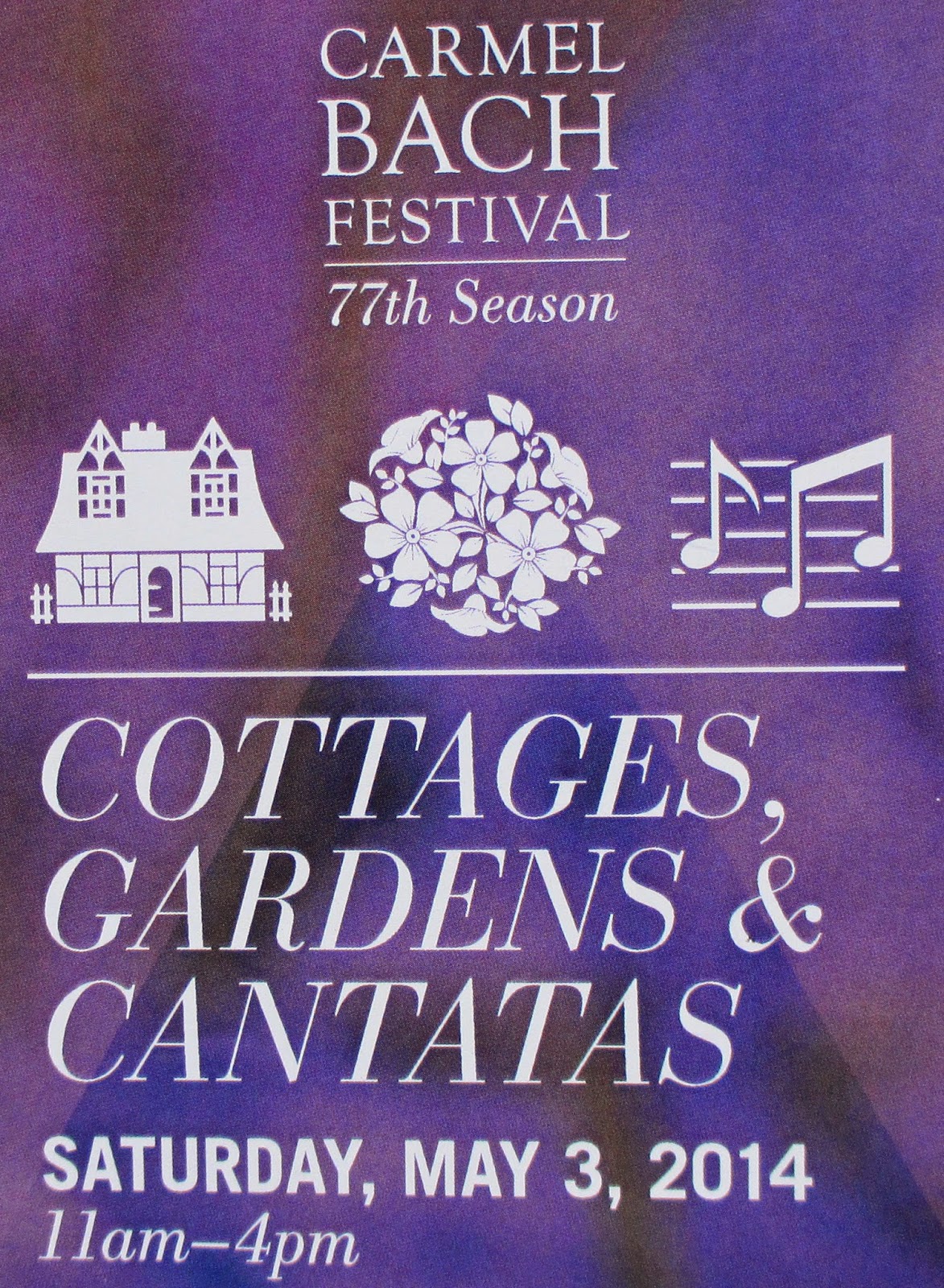 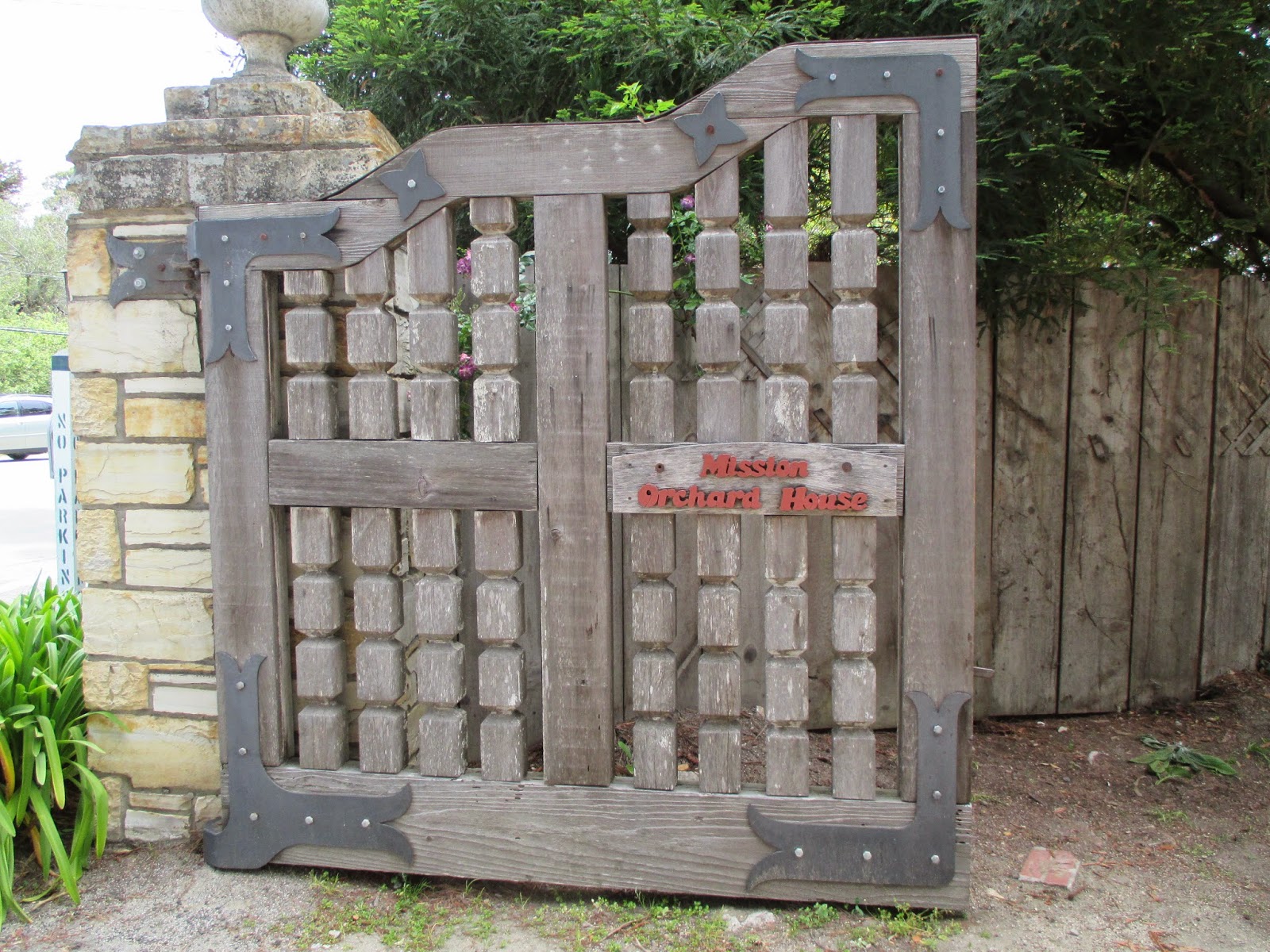 Many of us pass the Mission Orchard House daily while driving along Rio Road, but few have the opportunity to go behind the gate to visit the extraordinary casita garden and view what is considered the oldest residential dwelling in California.

There are two main houses on the property, one built of adobe and one of wood. The two structures, c. 1929, (adobe left, wood right) are seen in the picture below. 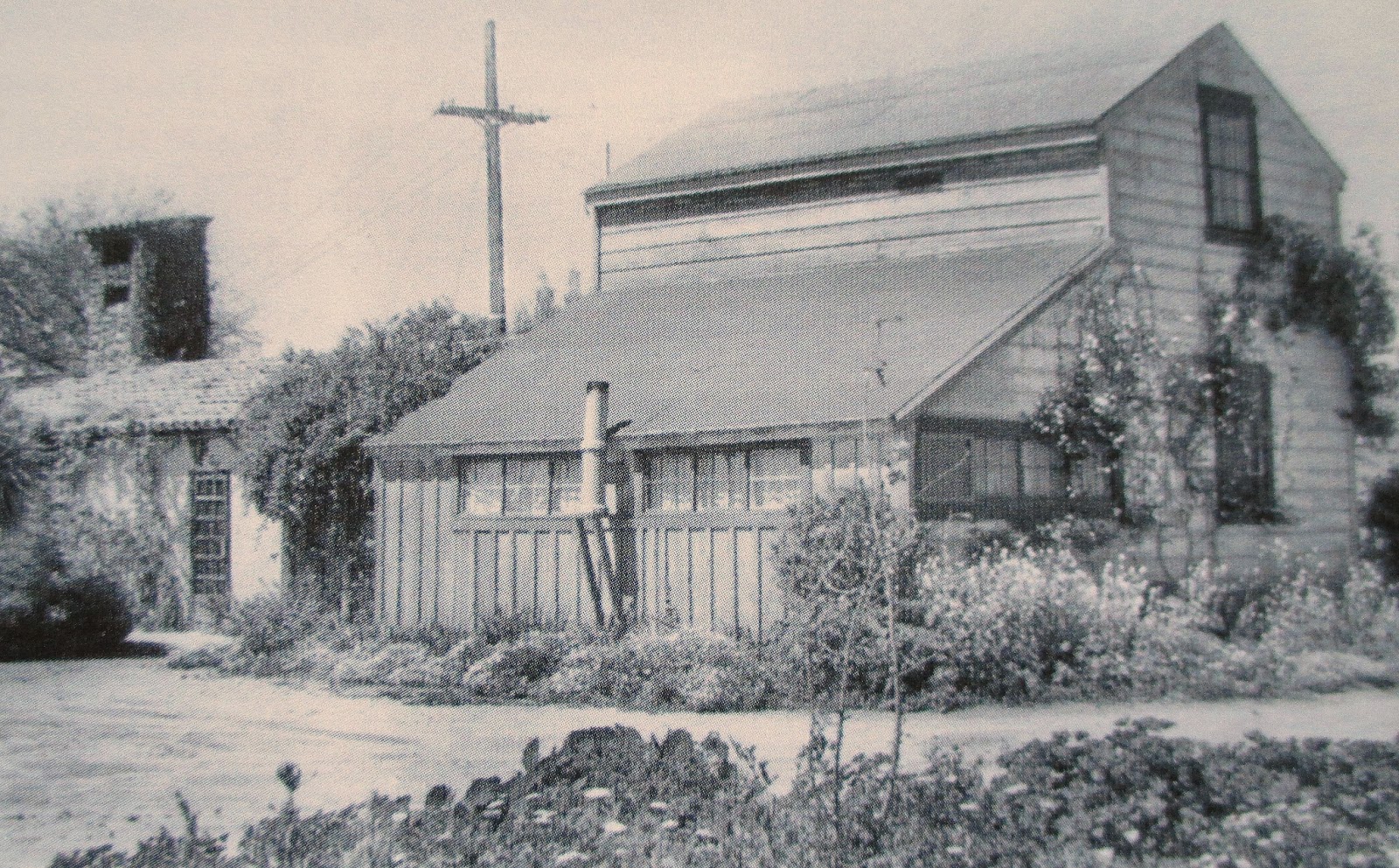 Though this property has a facinating history, this post will concentrate on the structures and garden in their present state. 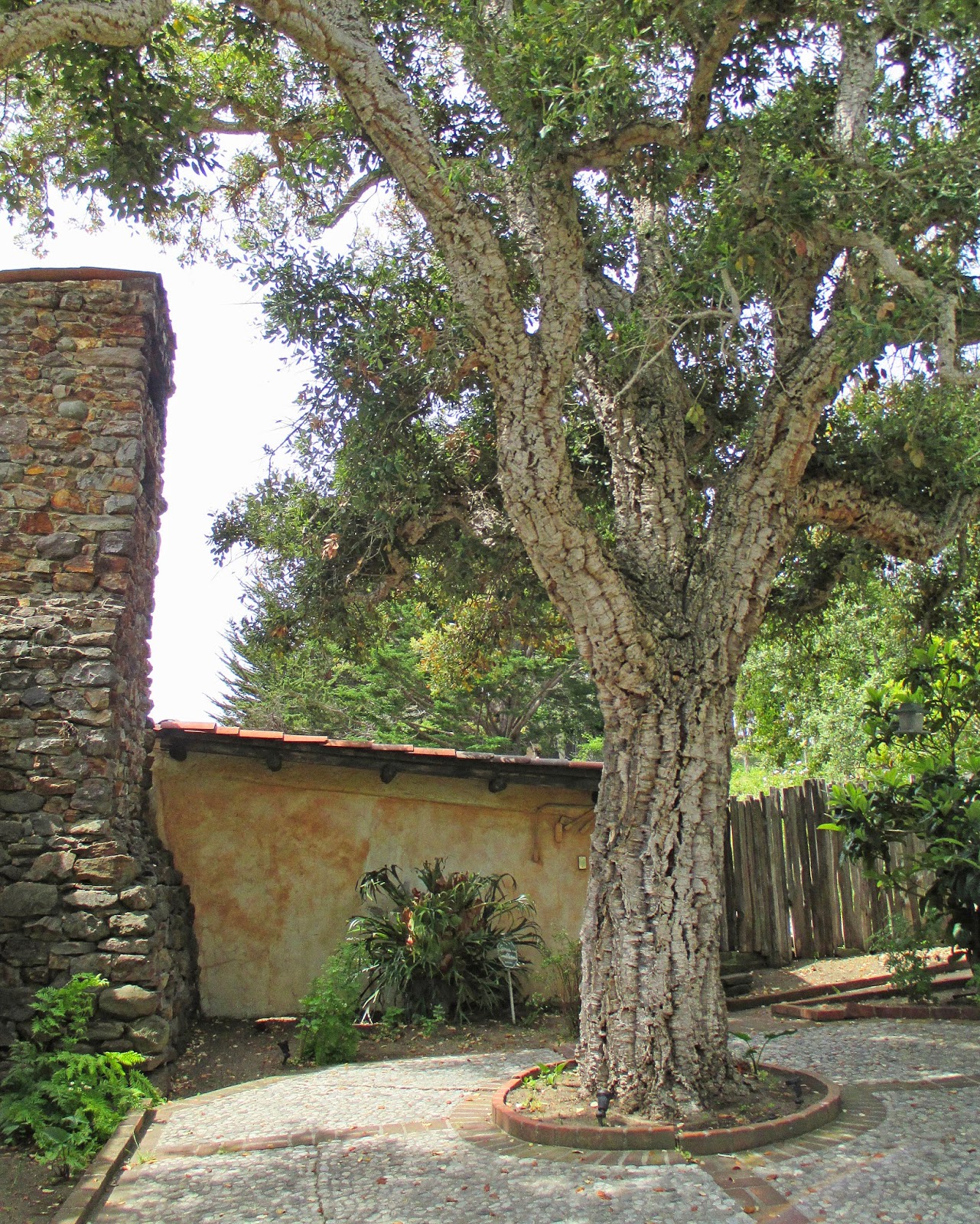 Just inside the gate stands a very old cork oak tree.  A native of Western Europe, namely Spain and Portugal, this oak may have been planted by Fr. Palou at the same time he planted the pear orchard next to the mission in 1774. 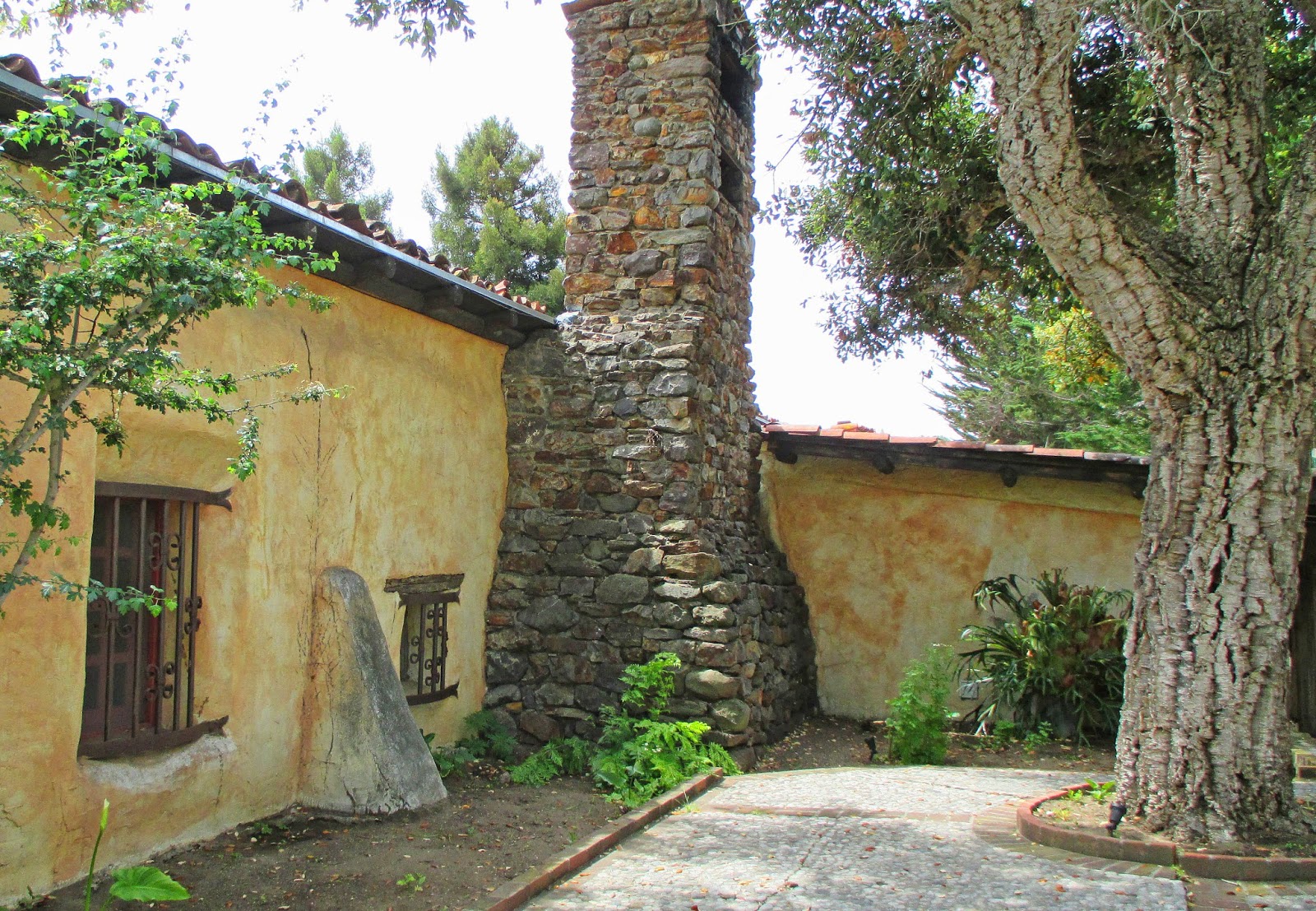 The cork oak forms a thick bark that may be harvested every 9 to 12 years.  The harvesting does not hurt the trees, some of which can live for up to 250 years.

The adobe wall shown in the picture above was part of the original orchard wall built in 1774 to surround Fr. Palou's pear orchard.  Today this wall is the north wall of the adobe living room, giving this adobe casita the distinction of being considered the oldest residential dwelling in California. 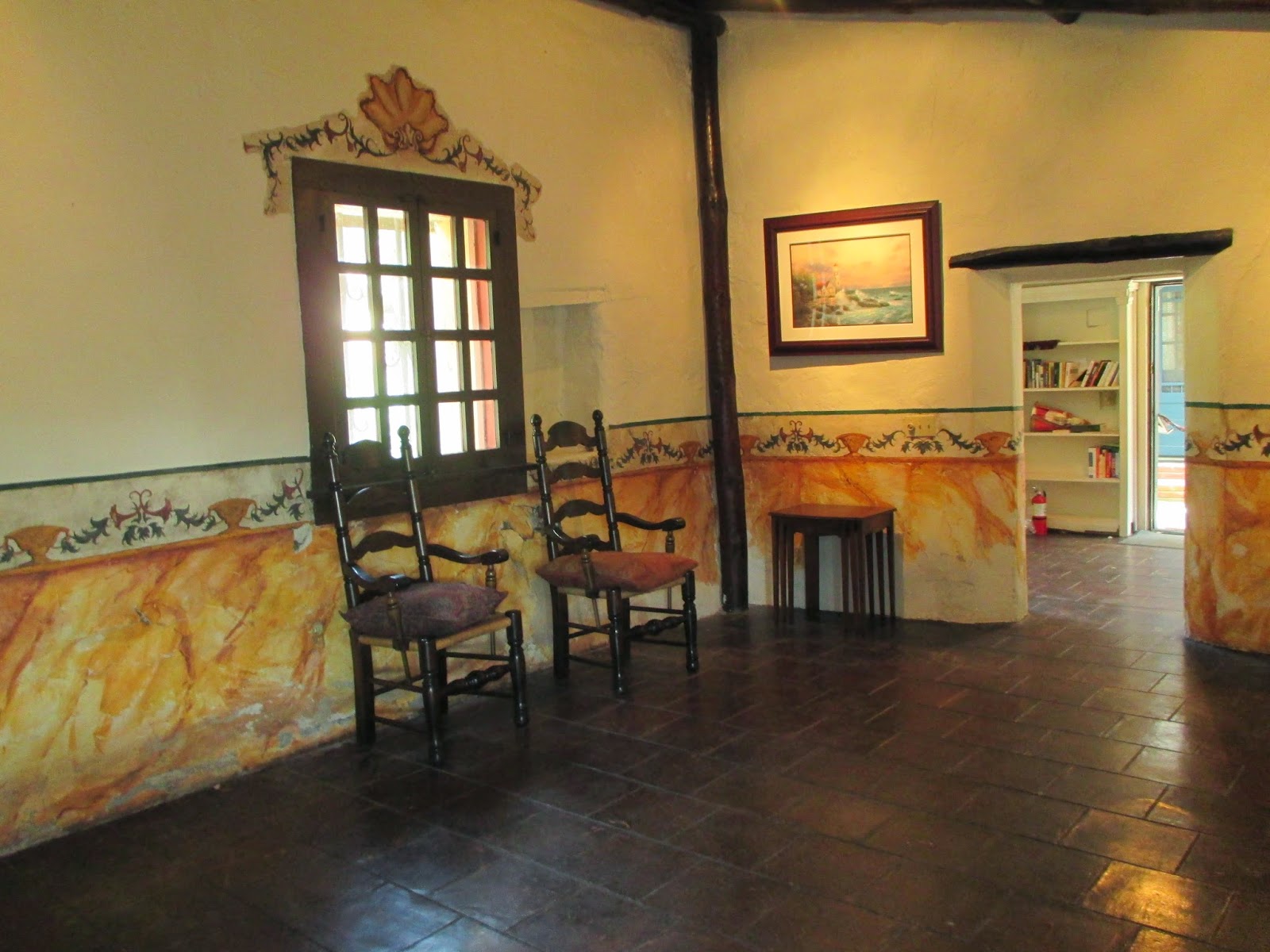 In 1812 mission records show that a lean-to was built against the orchard adobe wall to provide housing for the mission orchardist and caretaker.

Over the years the lean-to would grow to double its original size. 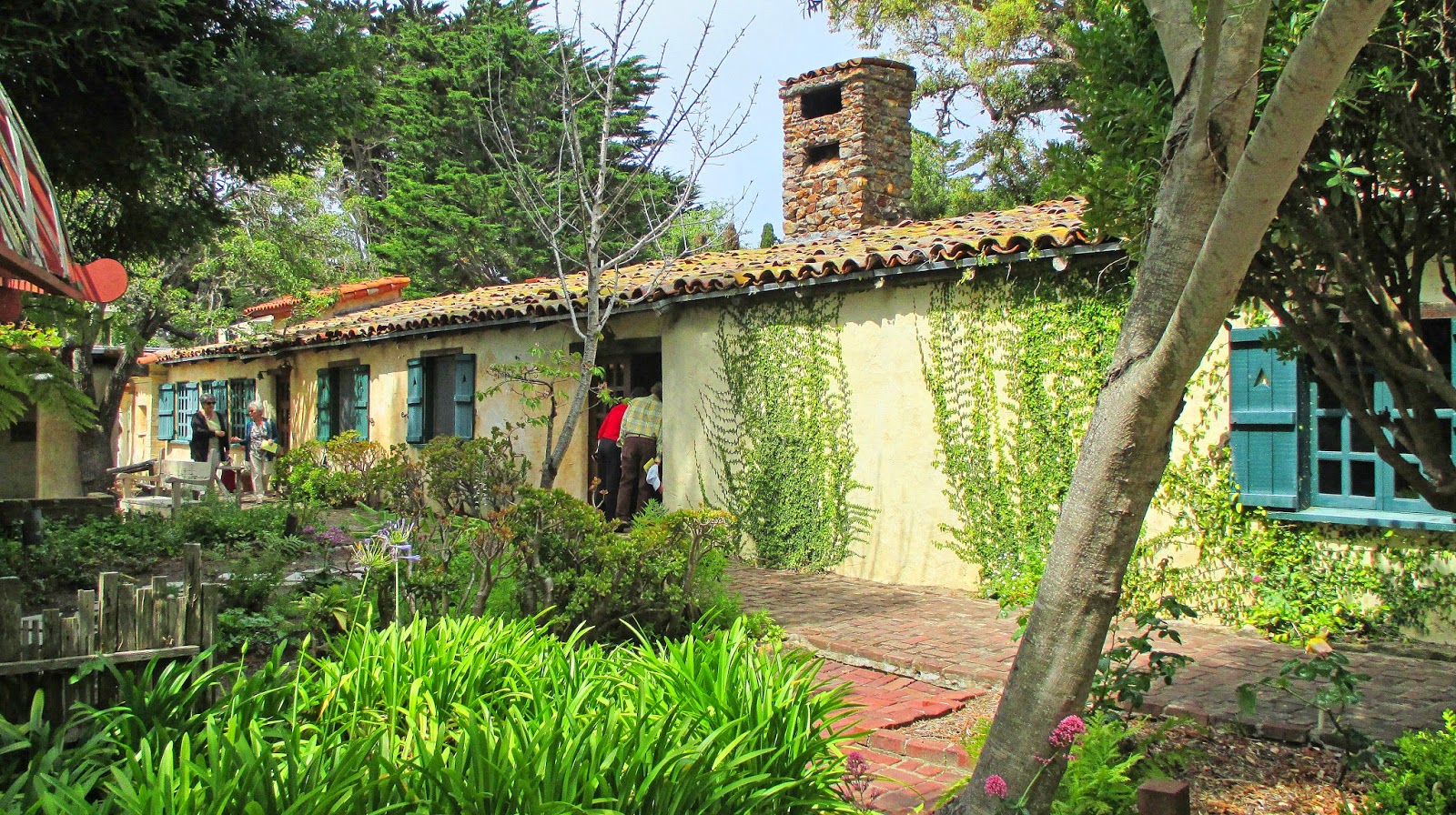 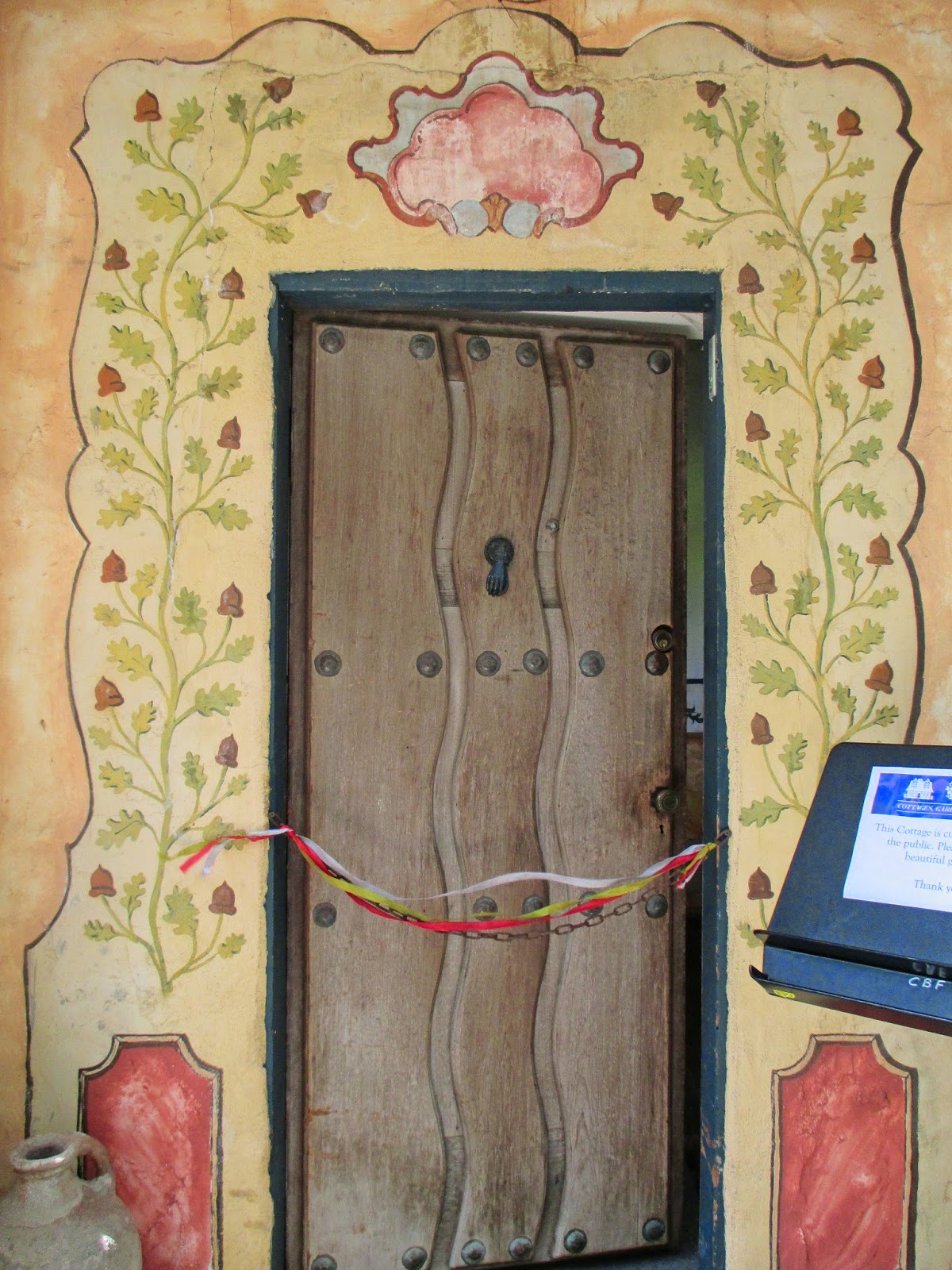 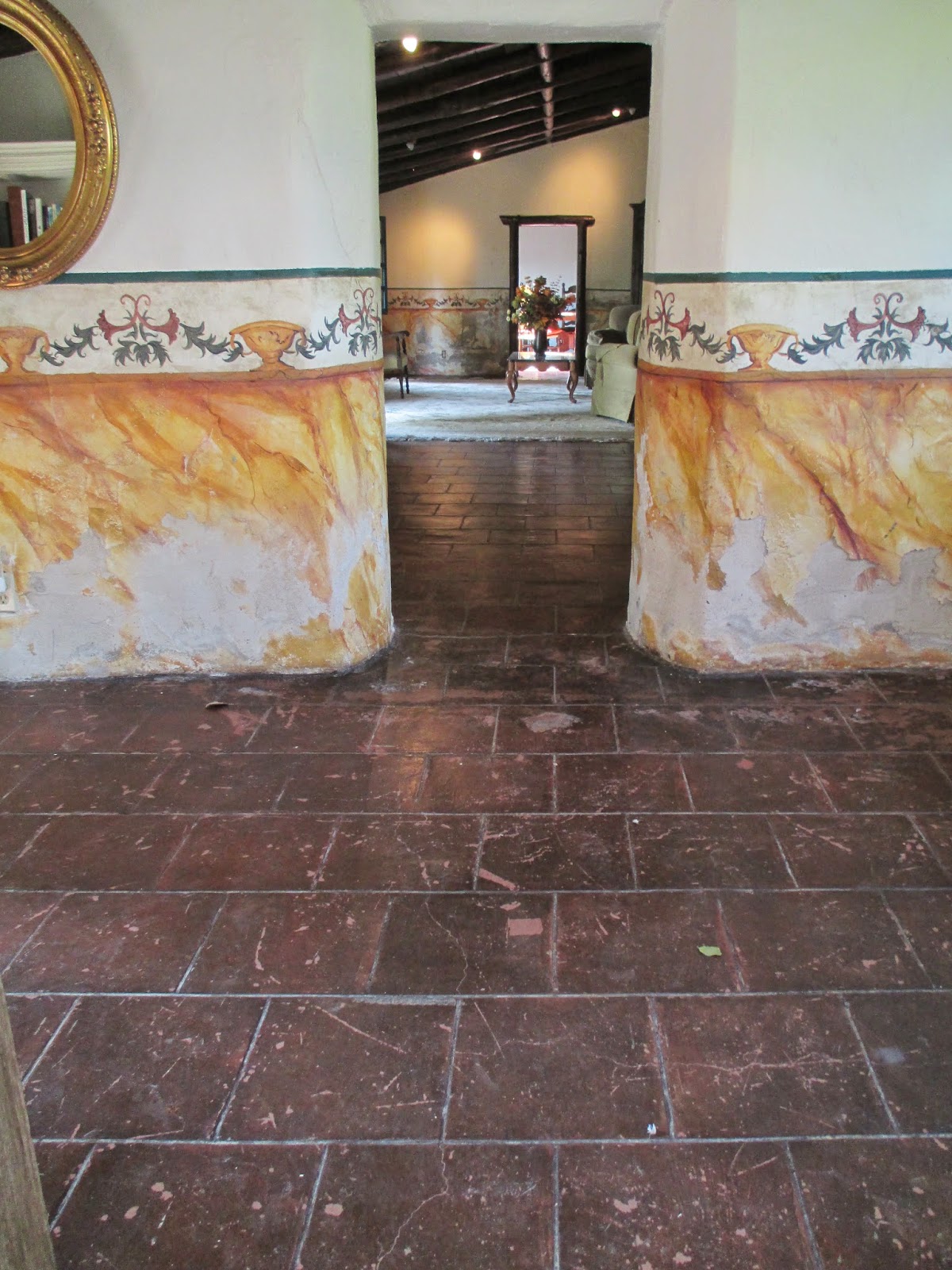 Mora hired stonemason Juan Martoral to build the large field-stone chimney into an addition to the north wall of the living room. 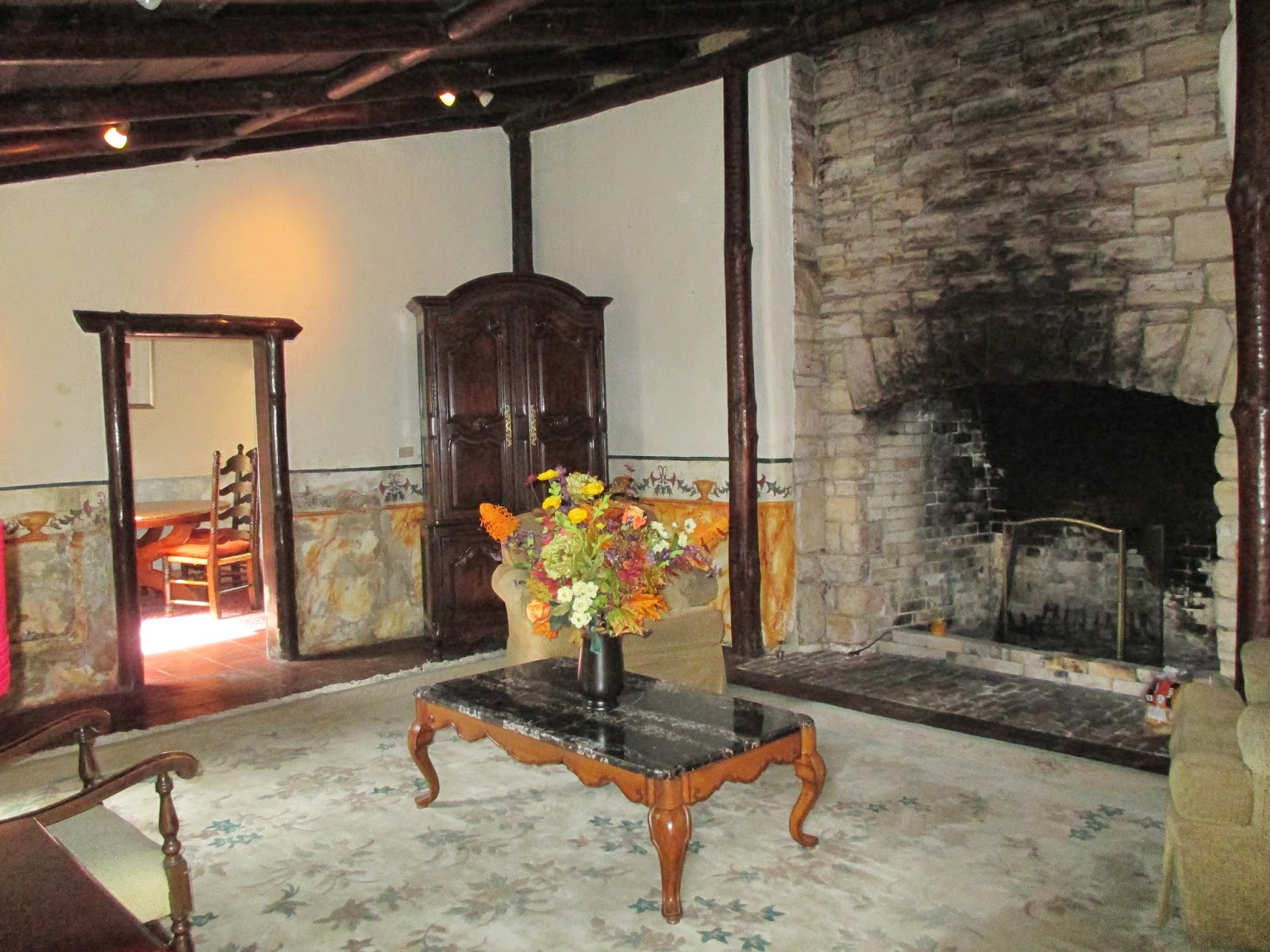 In the 1920's the adobe house would be opened as a tea house by Carmel's second mayor and first female mayor, Eva DeSalba.

Adjacent to the adobe, 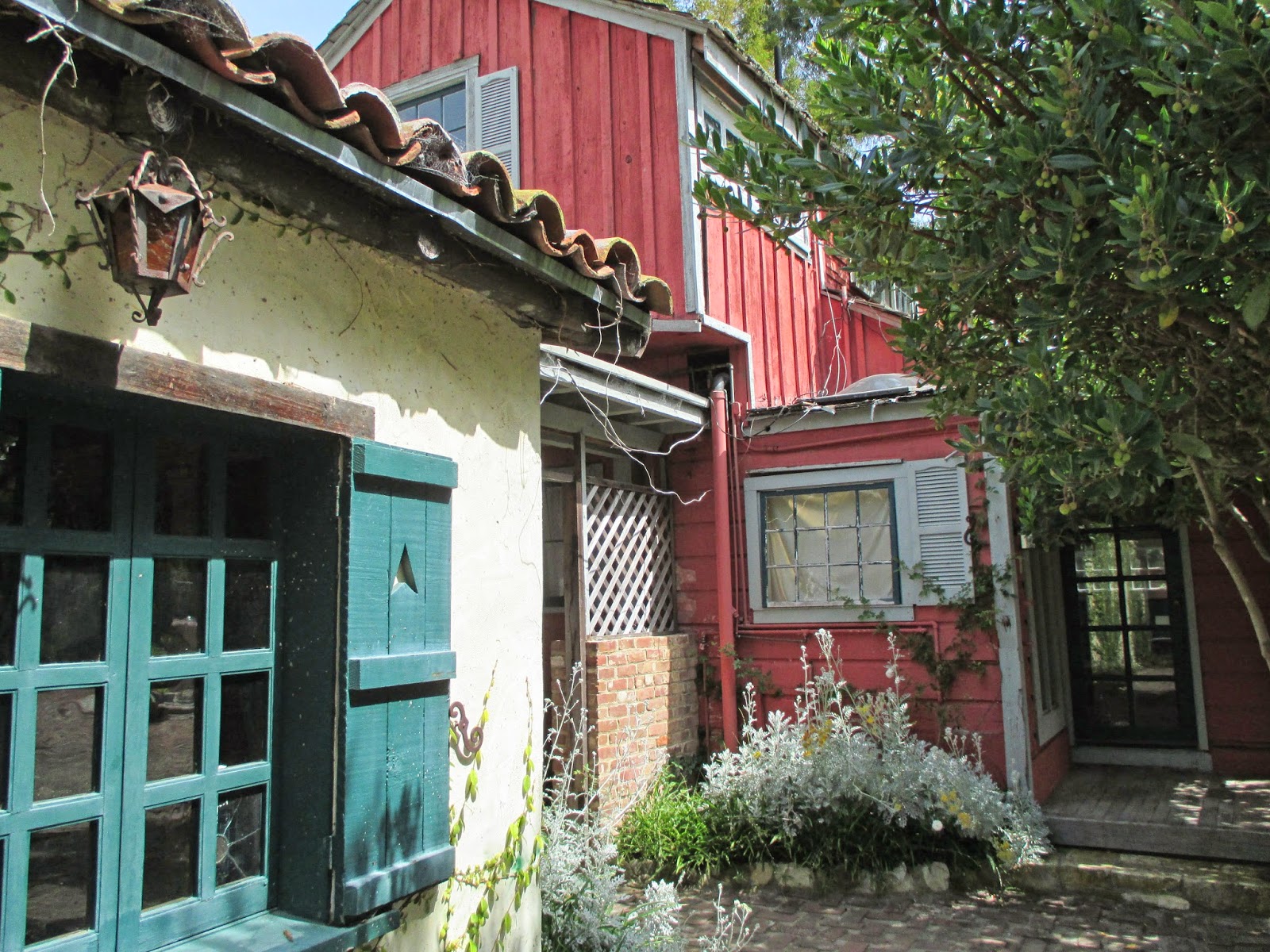 the second house on the property, the pink wood structure, was originally built by squatters beginning in 1850. 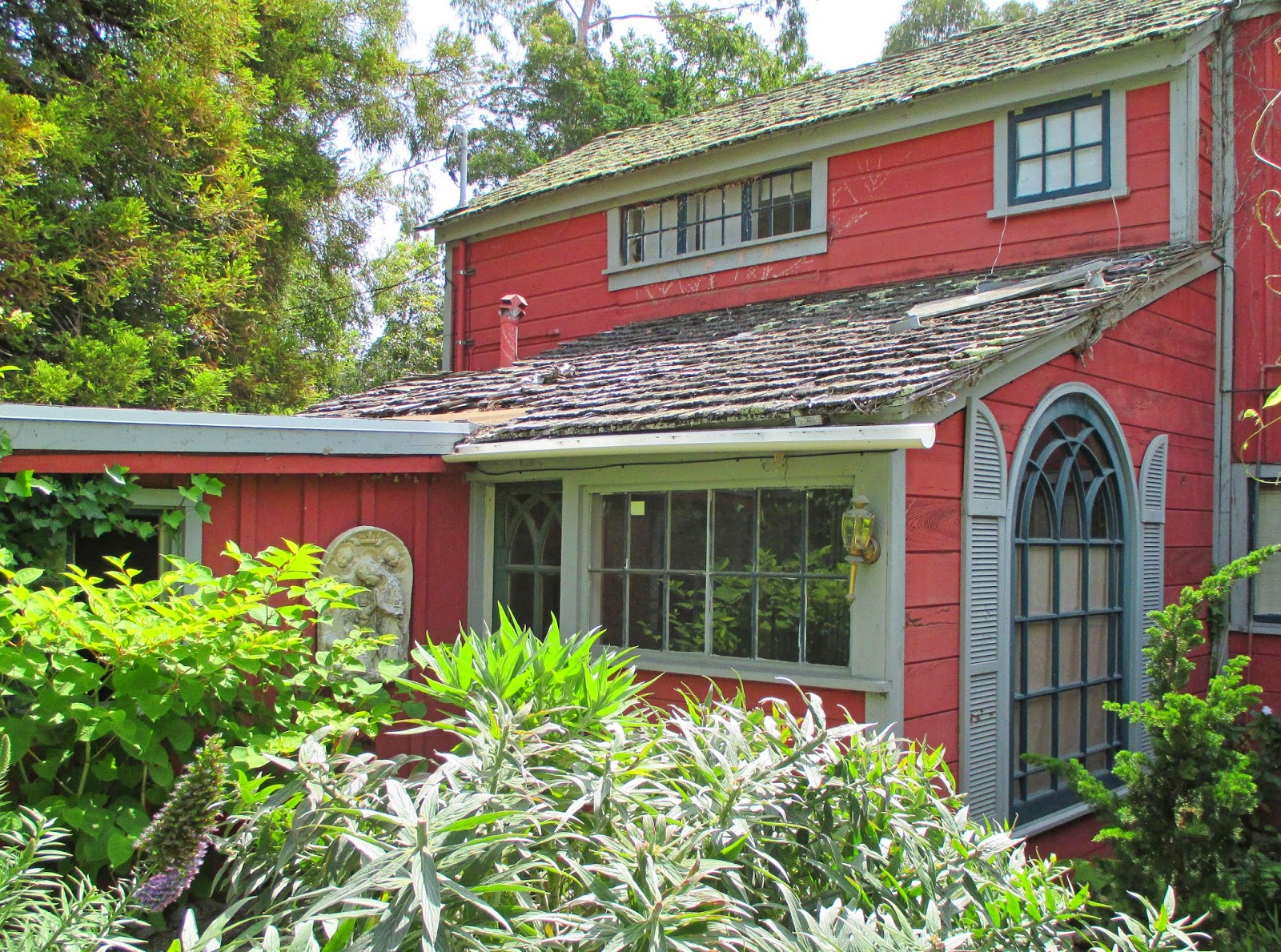 Legend claimed that the house was built on piers of whalebone vertebrae.  In 1996 when the house was restored, this was proved to be true. 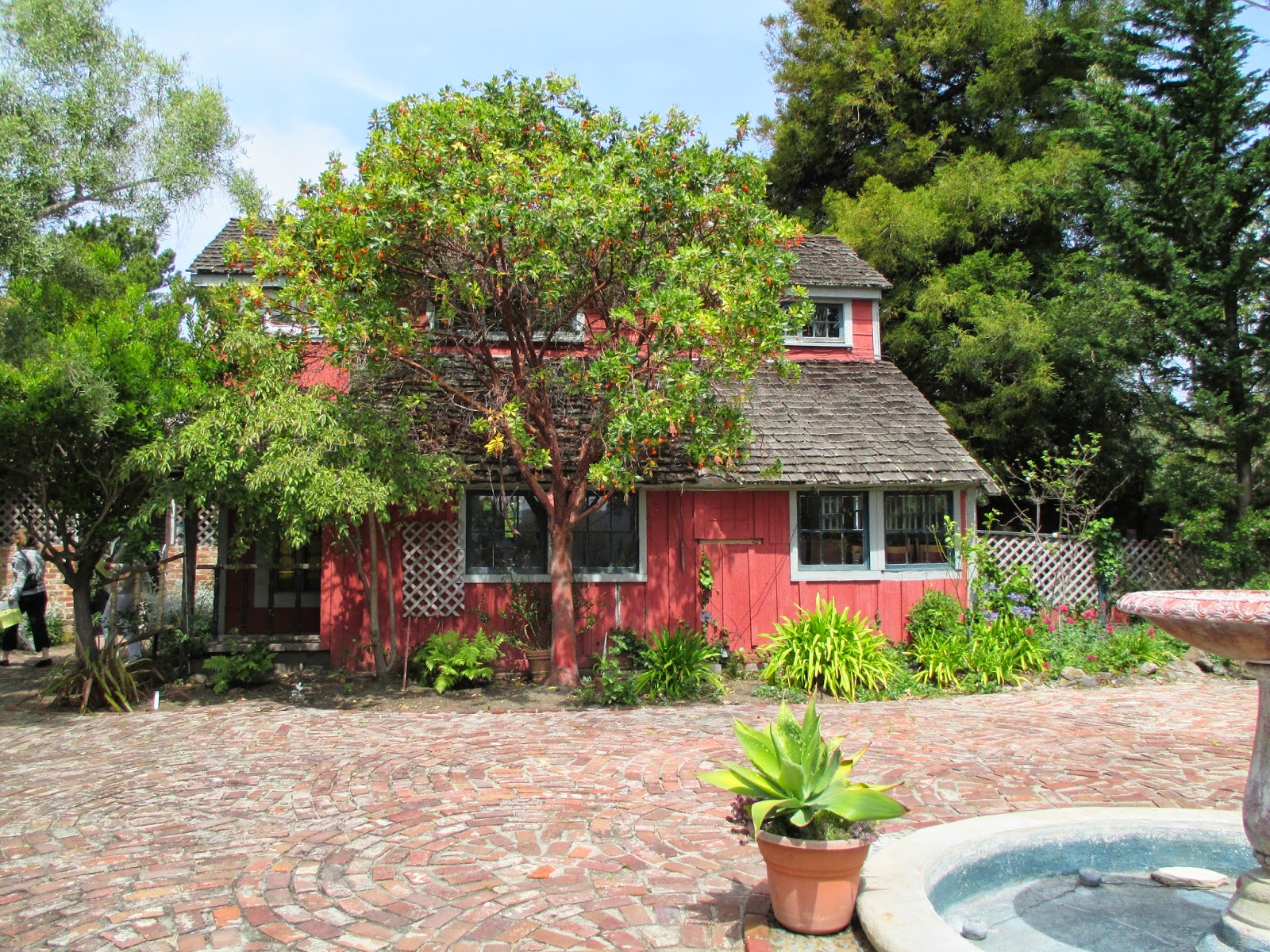 As I walked the gardens, the tranquil sounds of the cello, played by high school freshman Robert Percell, filled the air.


The various owners of this property have added to the gardens over the years. An uneven brick walkway leads past a ramada for al fresco dinning. 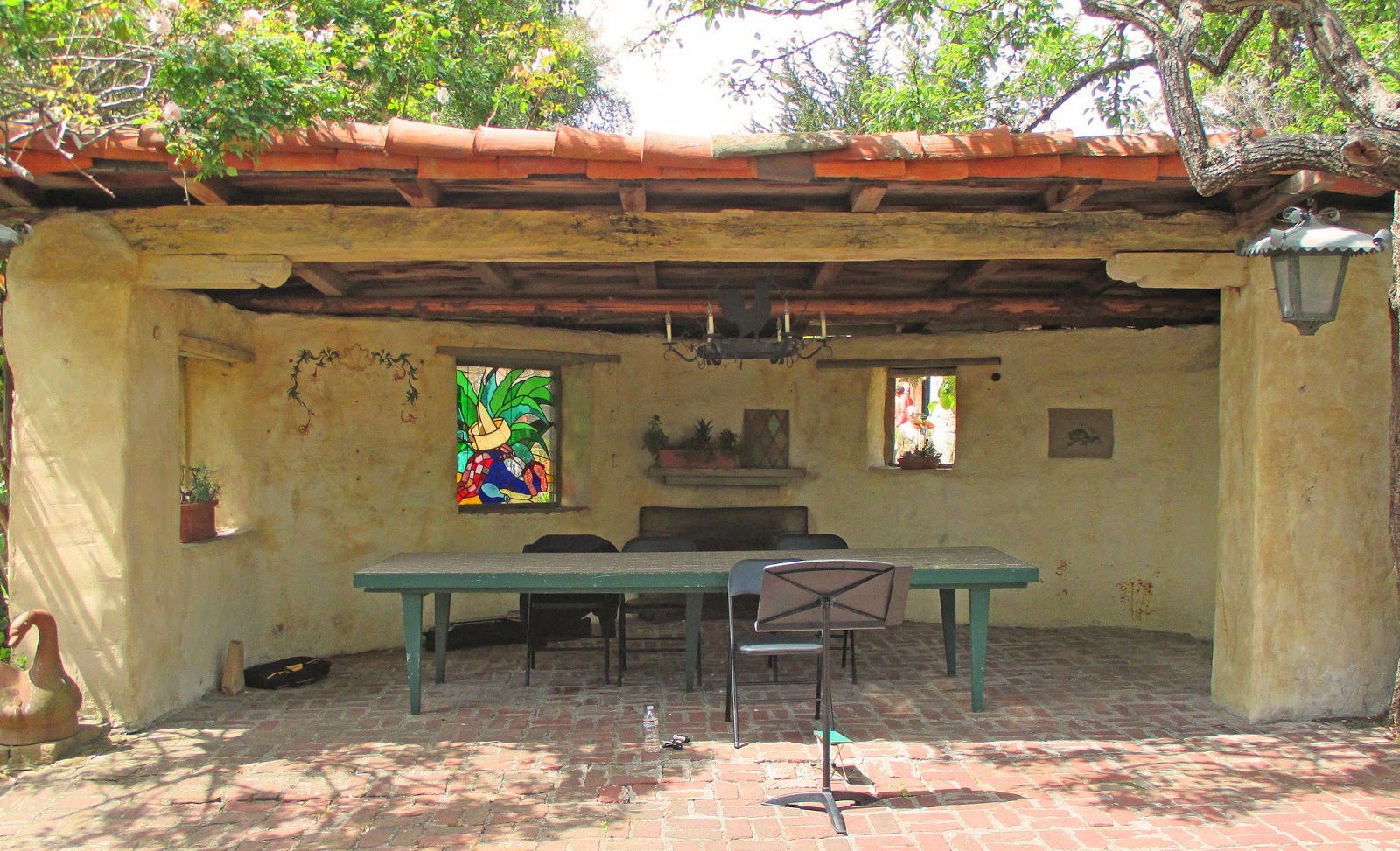 The gardens are overflowing with flora in every direction. 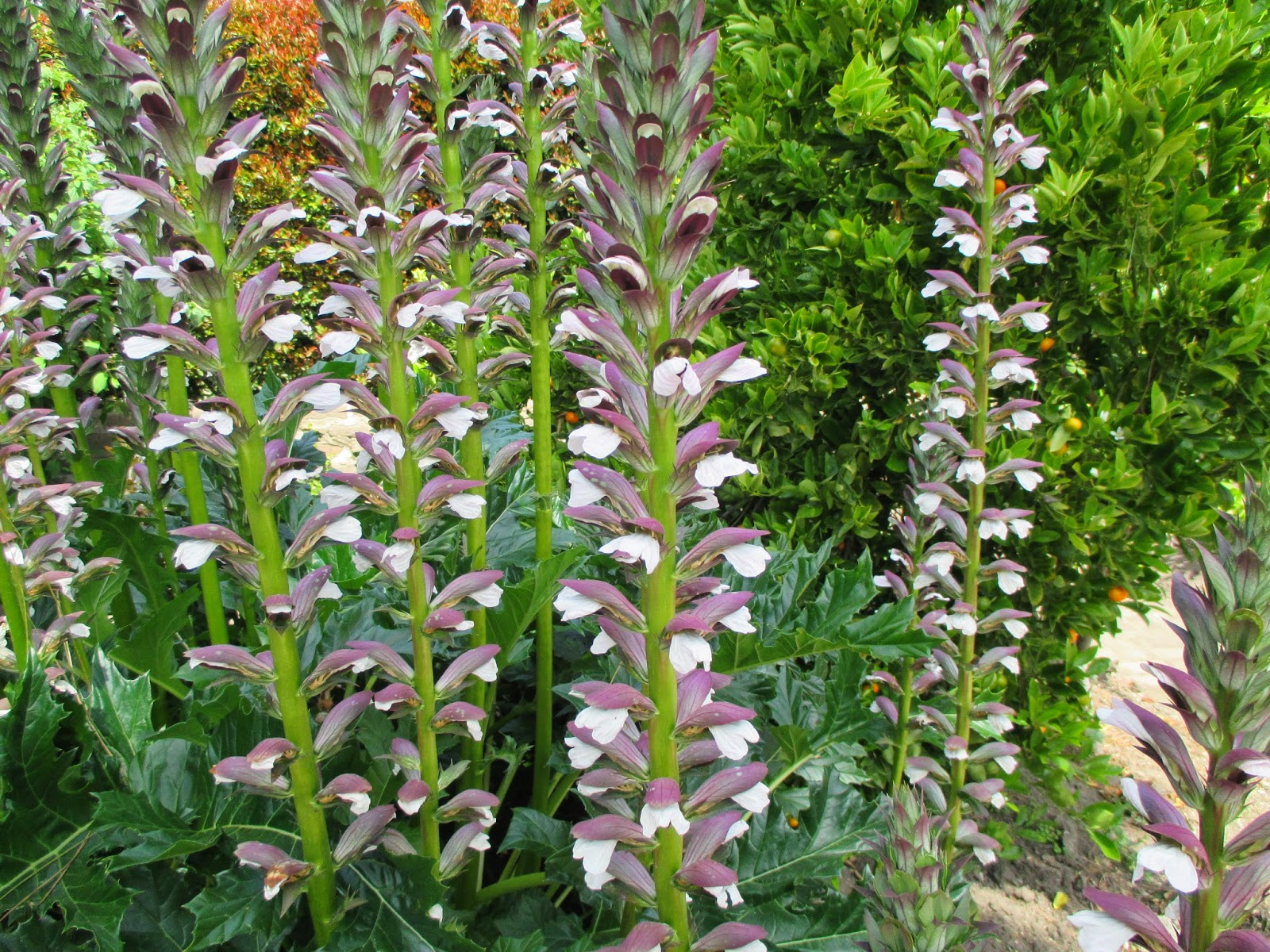 pride of Madeira, and 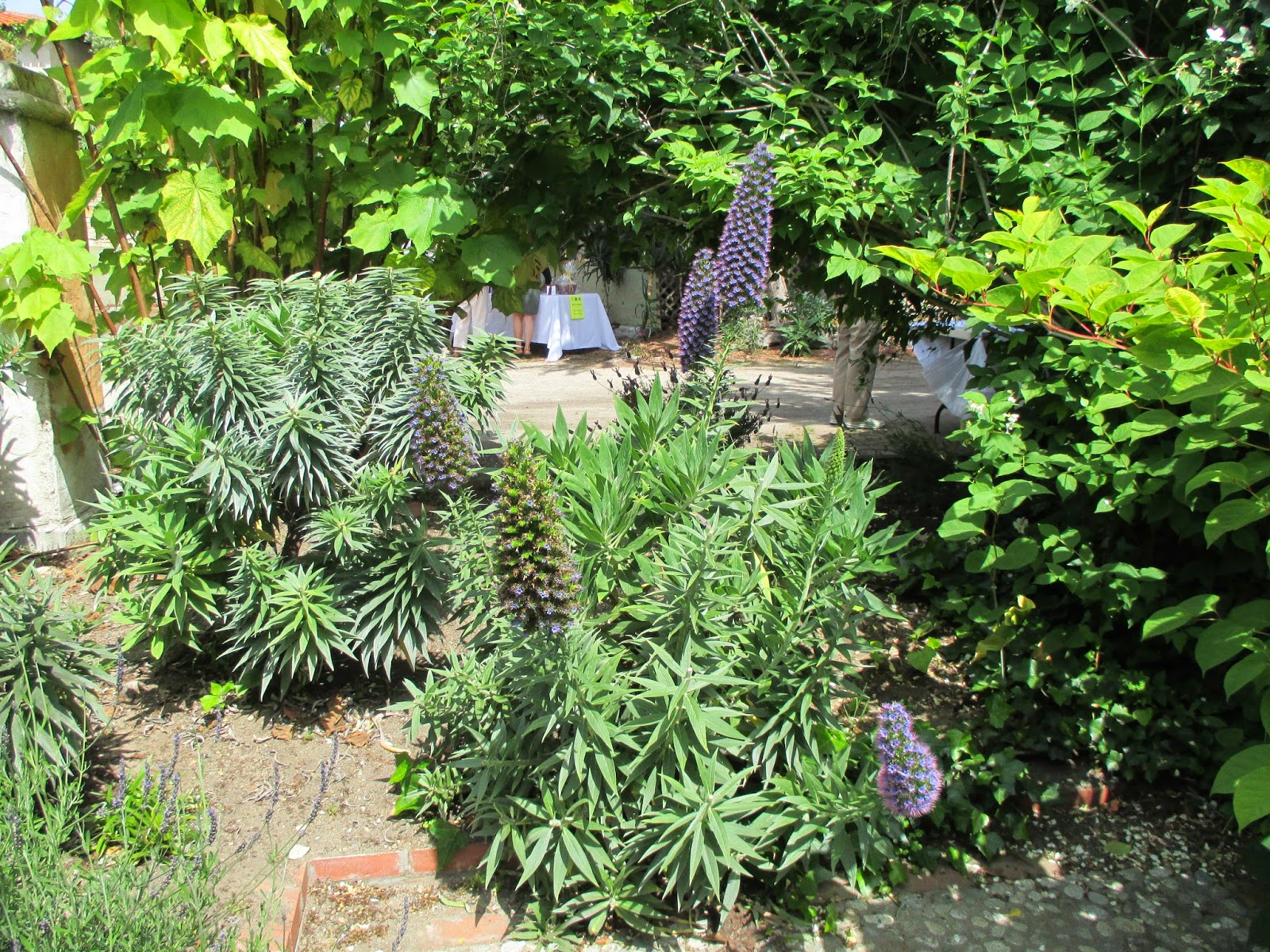 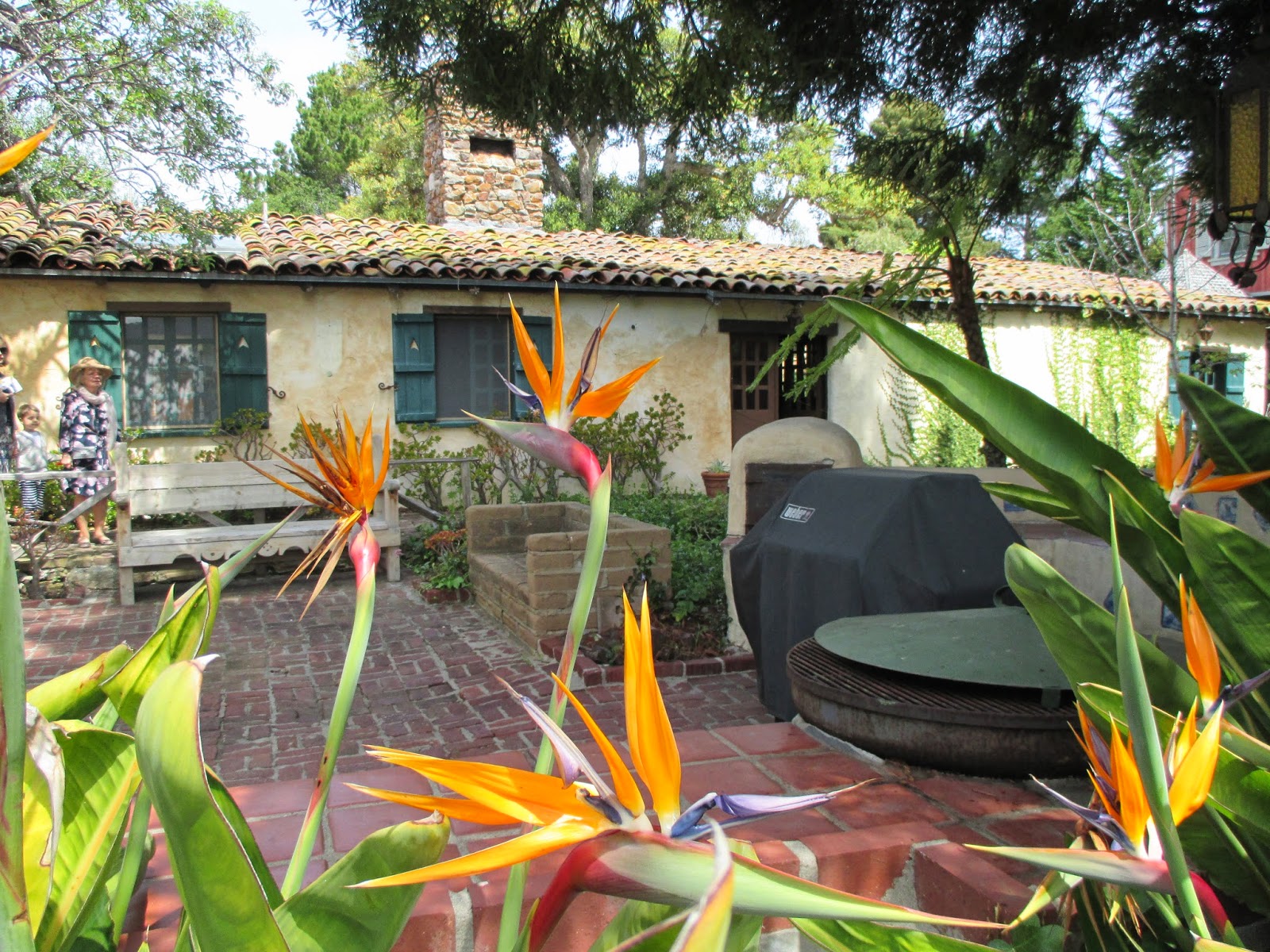 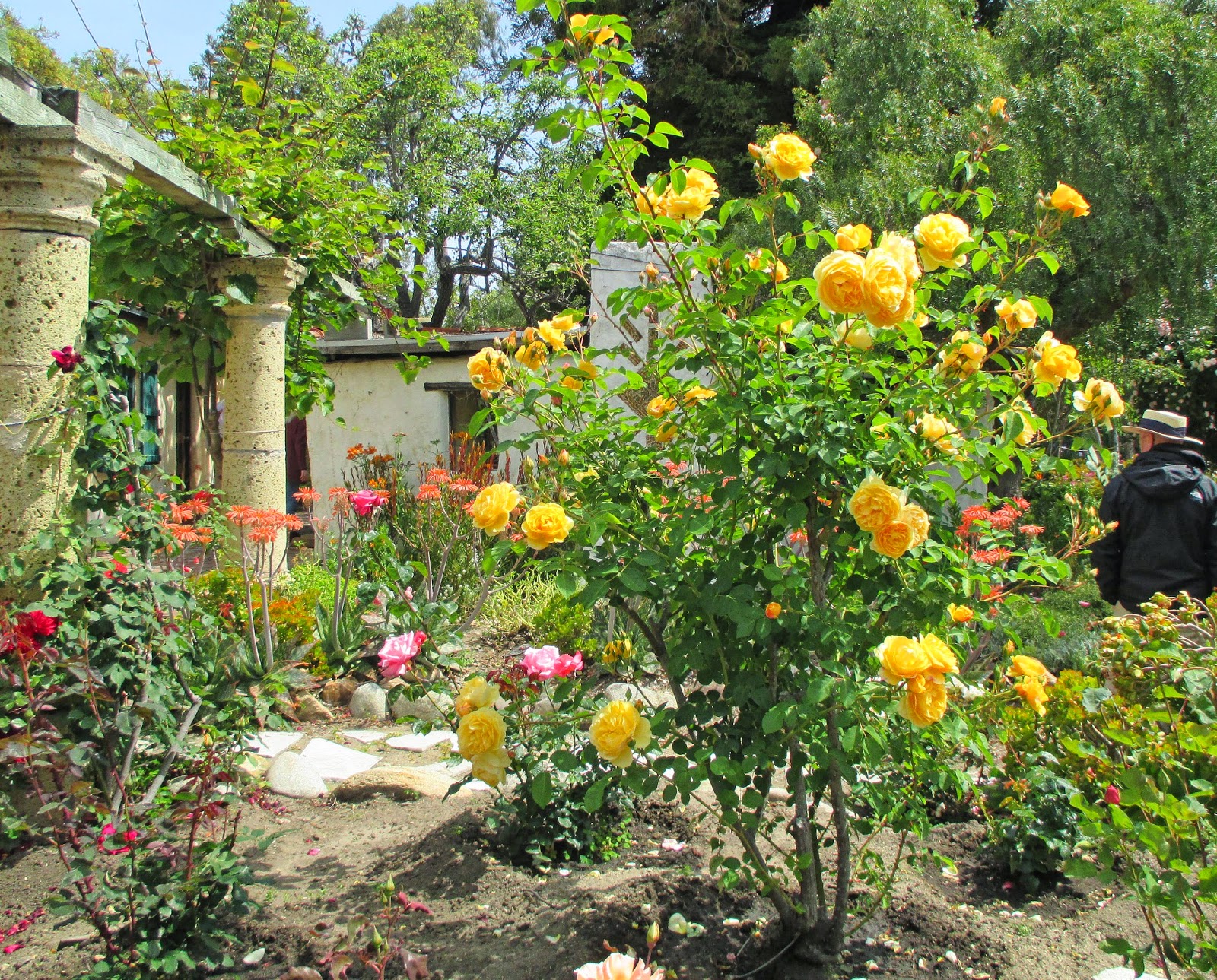 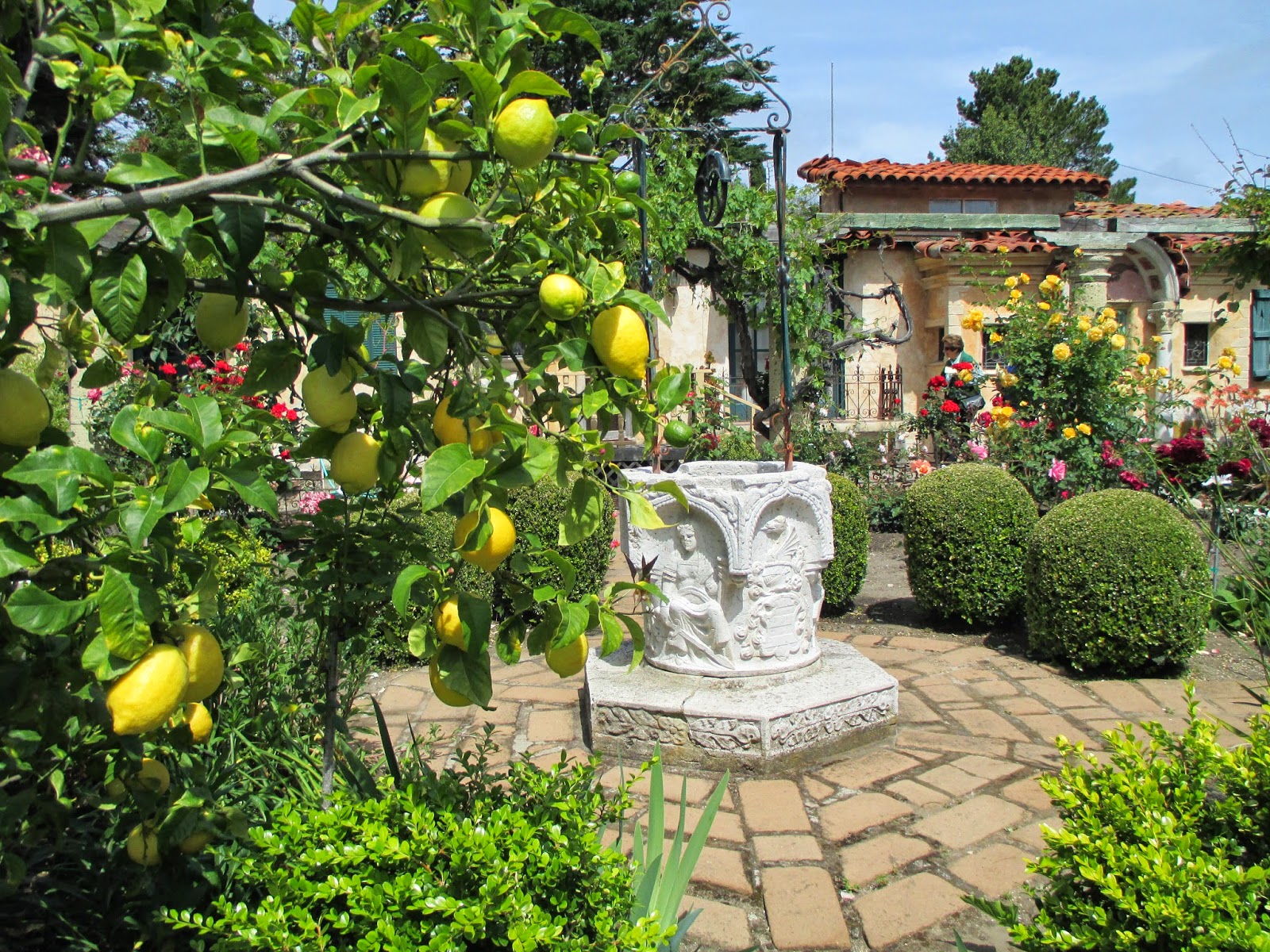 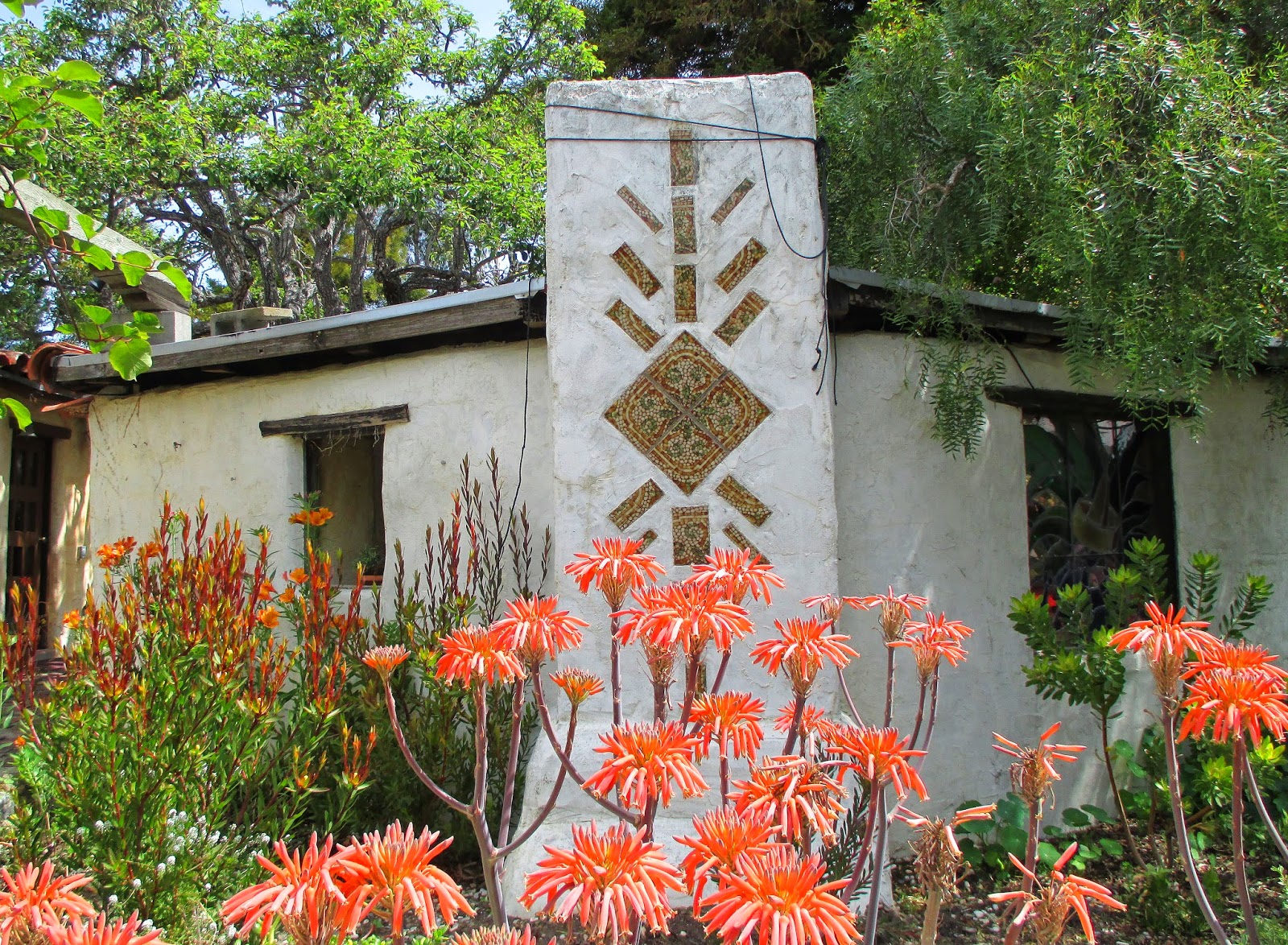 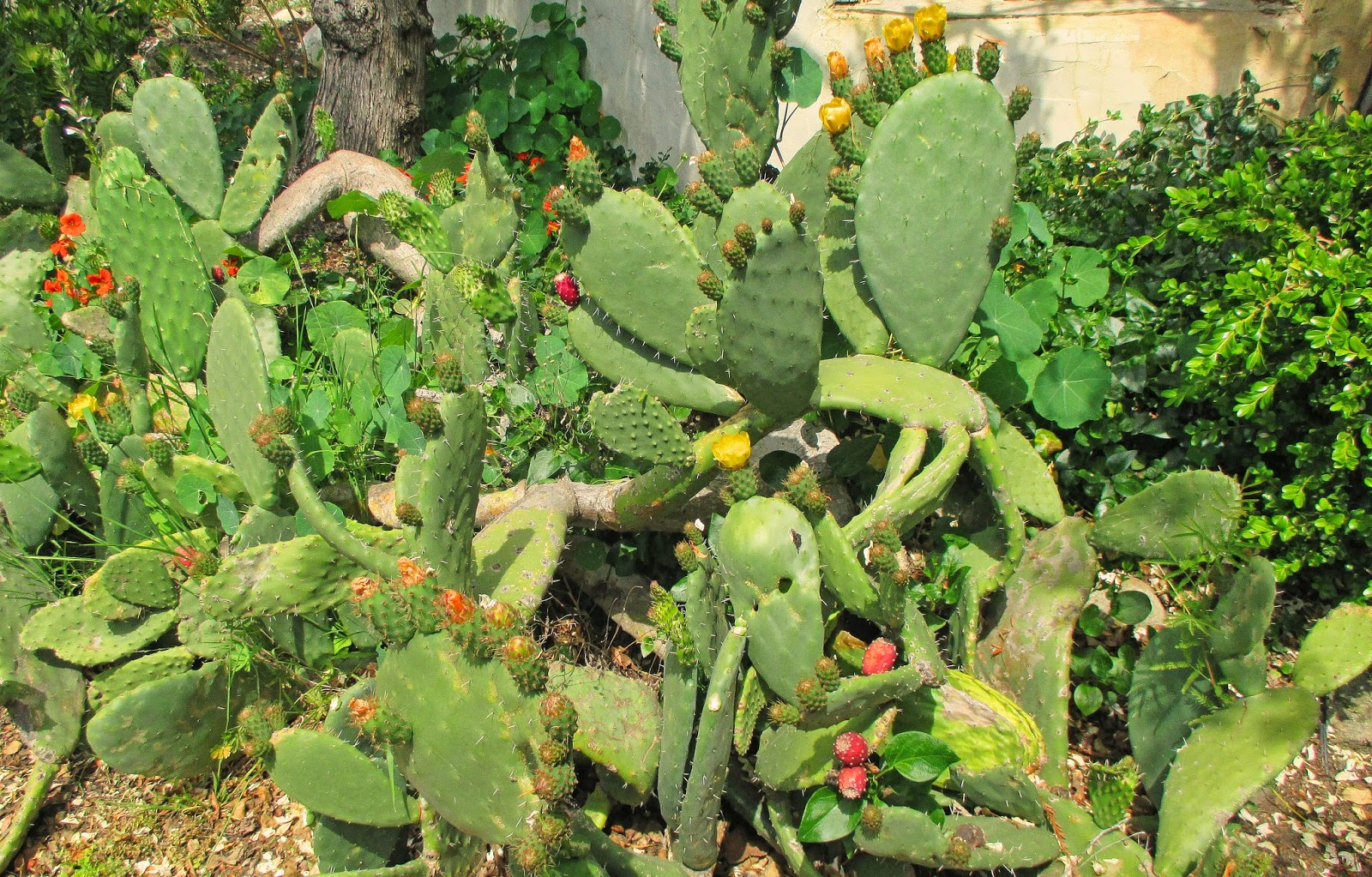 In 1976, antique dealer Harry Lewis Scott purchased the property and decorated the home and garden with museum worthy antiques. 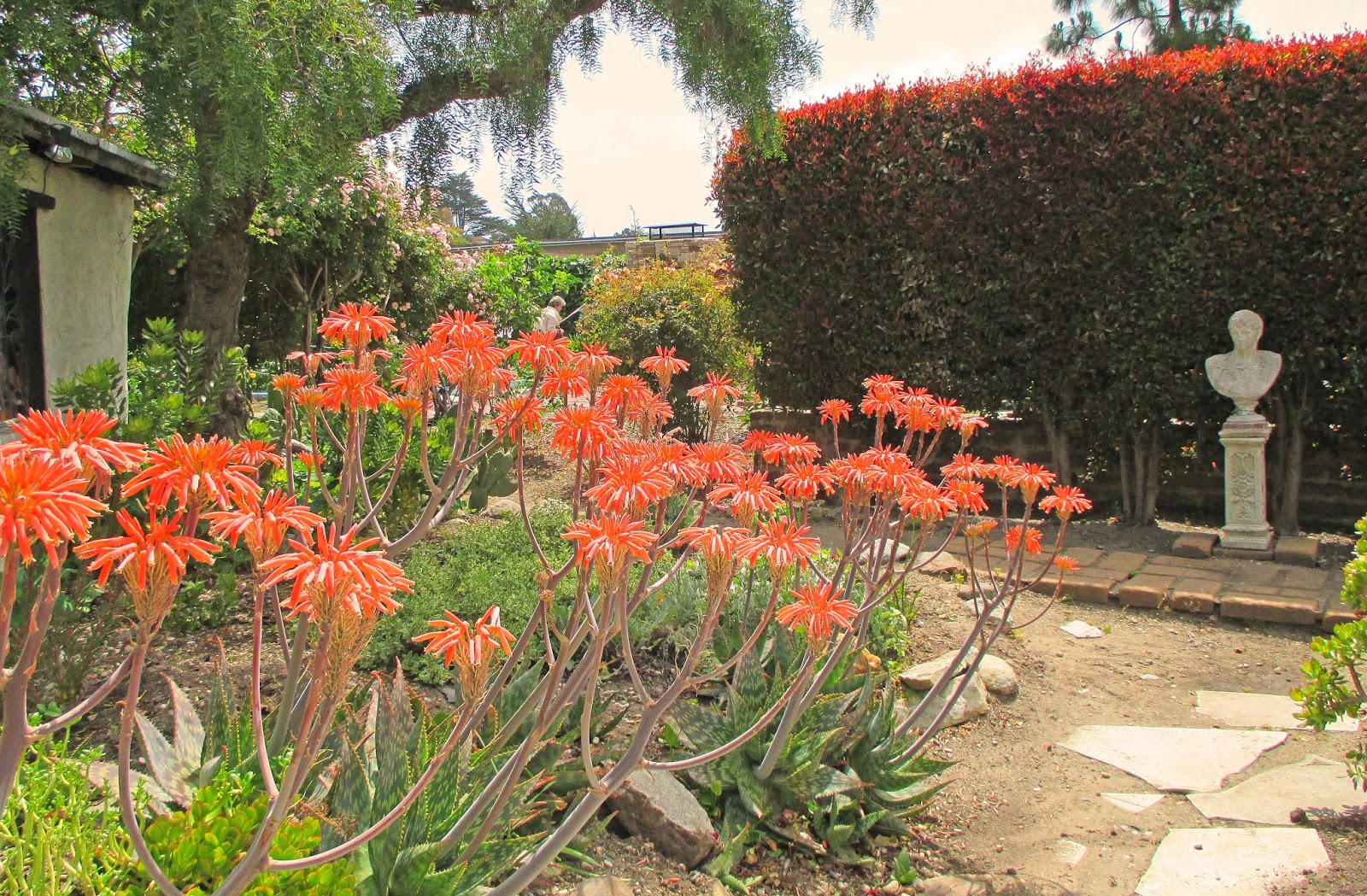 He even incorporated pieces of St. Patrick’s Cathedral, damaged in the Loma Prieta Earthquake of 1989, into the garden. 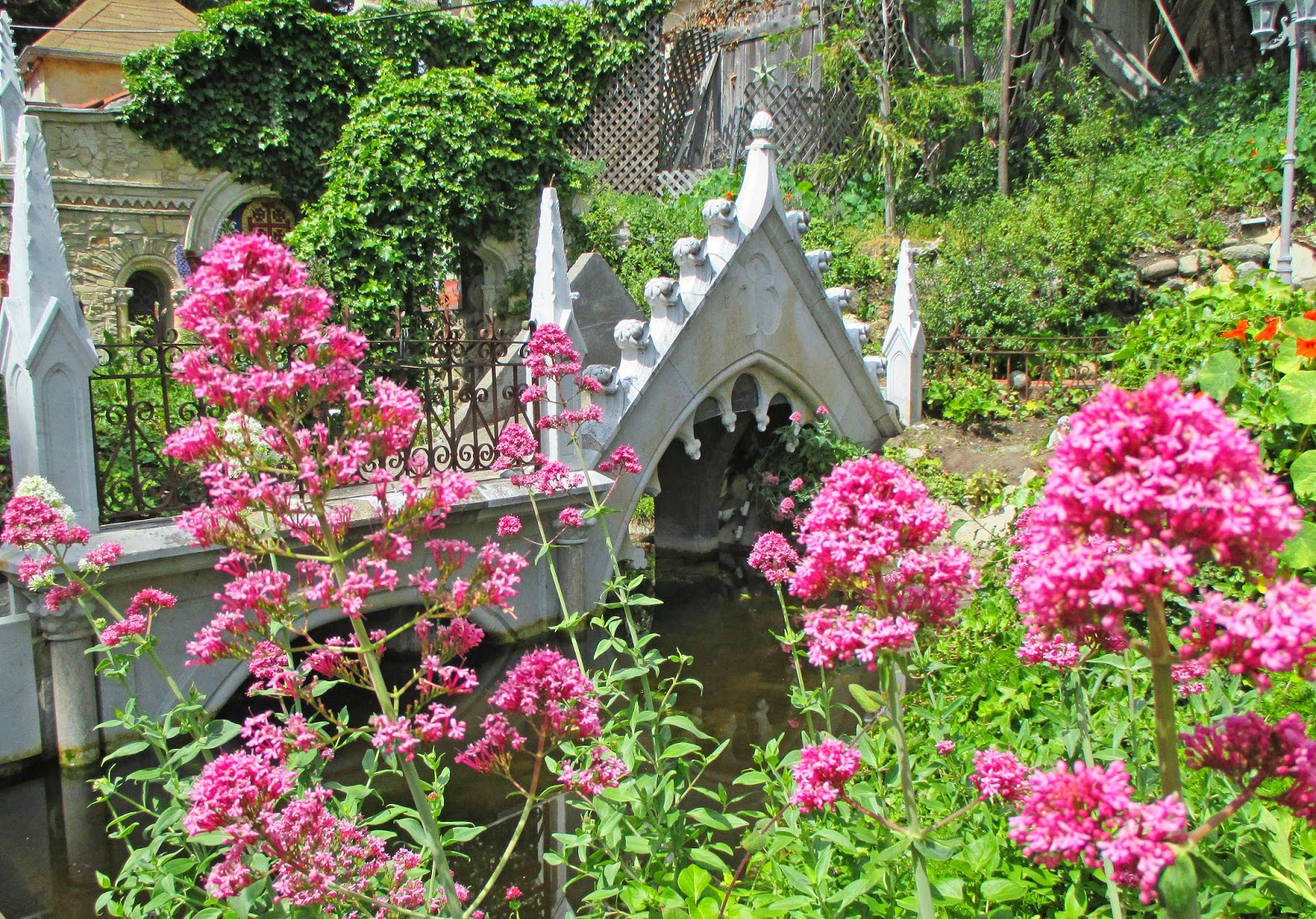 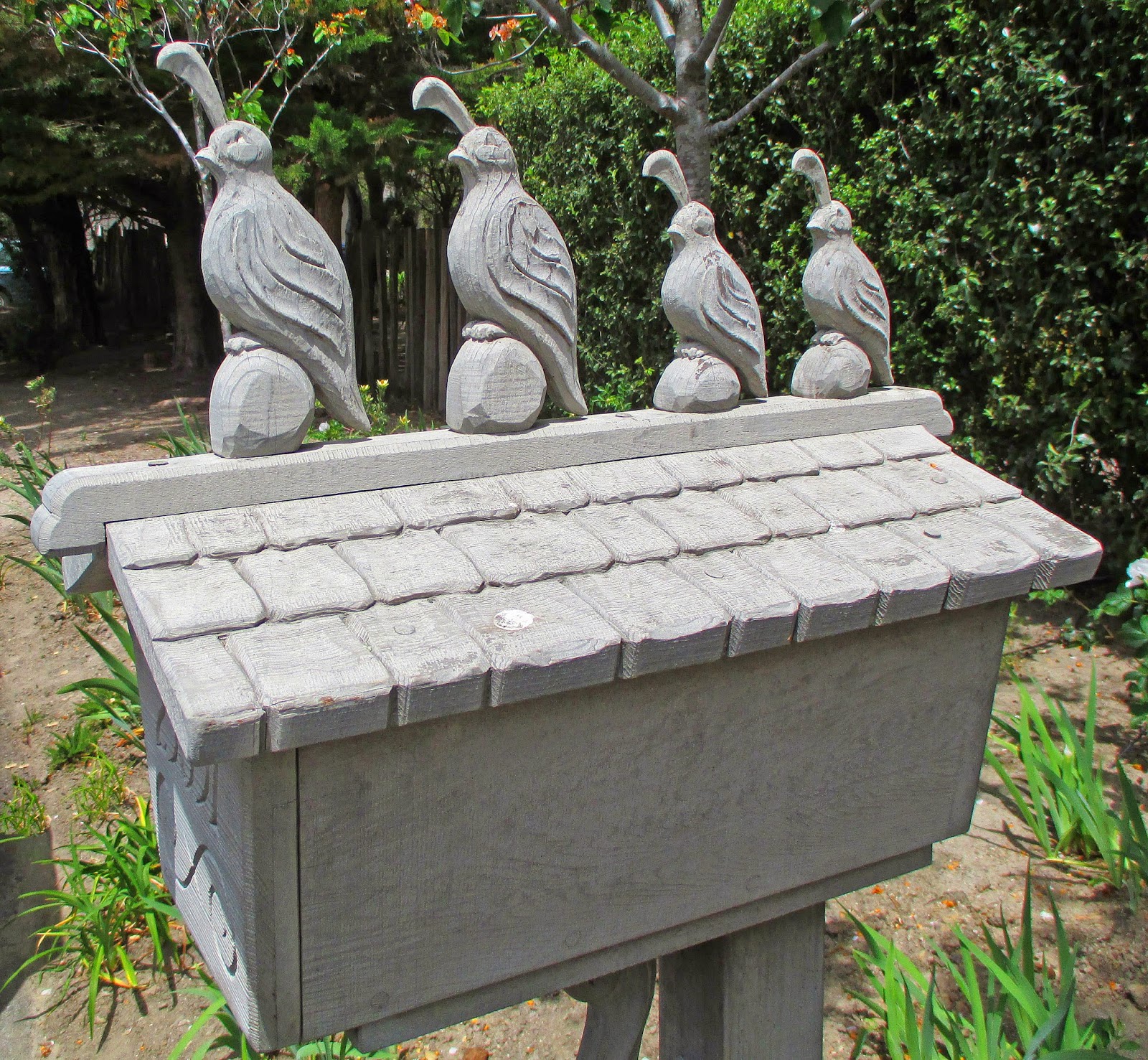 Our next property, Le Papillion, is owned by Brenda and David Mauldwin.  Brenda runs a garden design and consulting company, The Window Box. 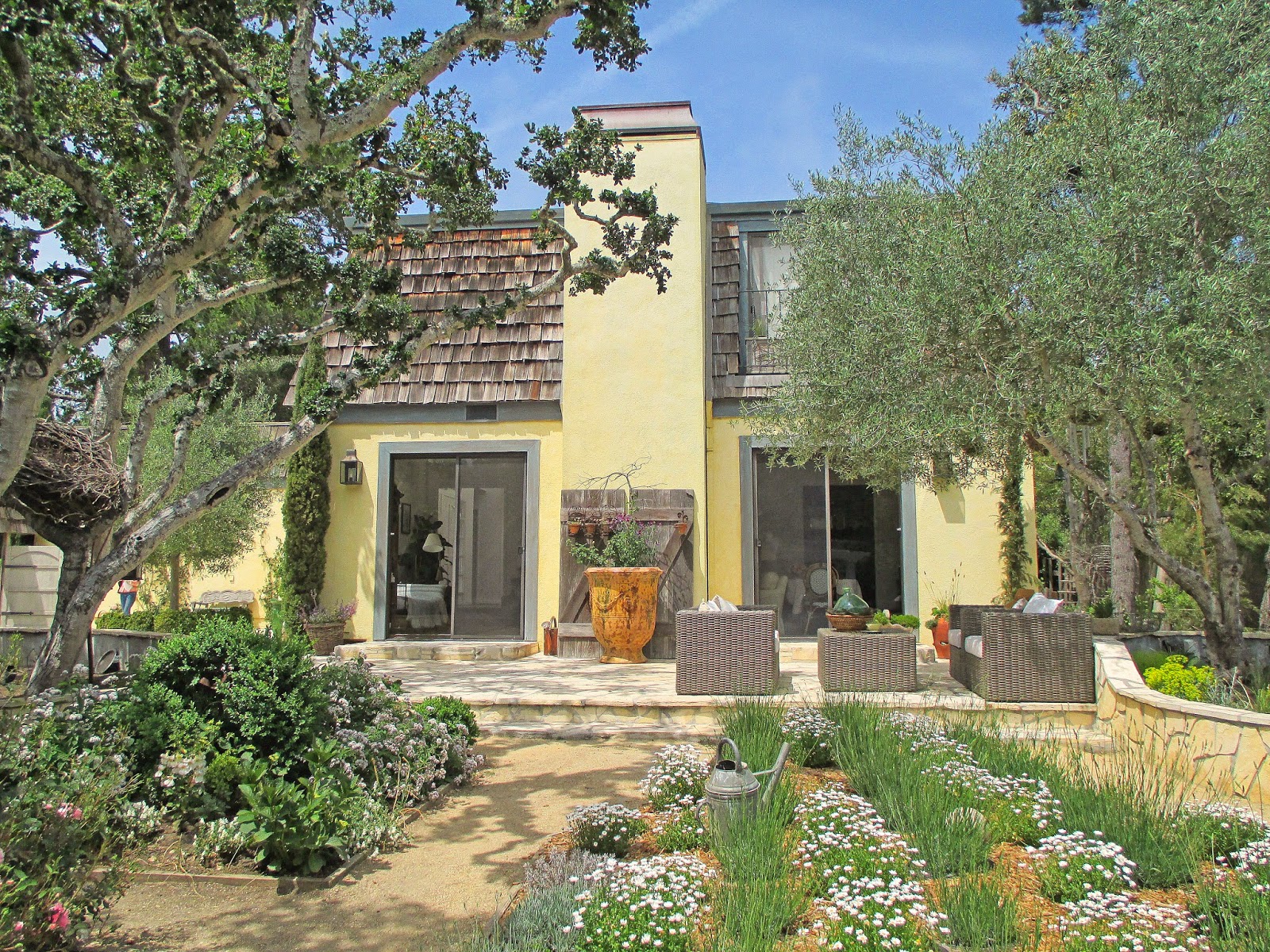 Her creative touch appears throughout. From wine bottle oil lamps which illuminate the property at night, 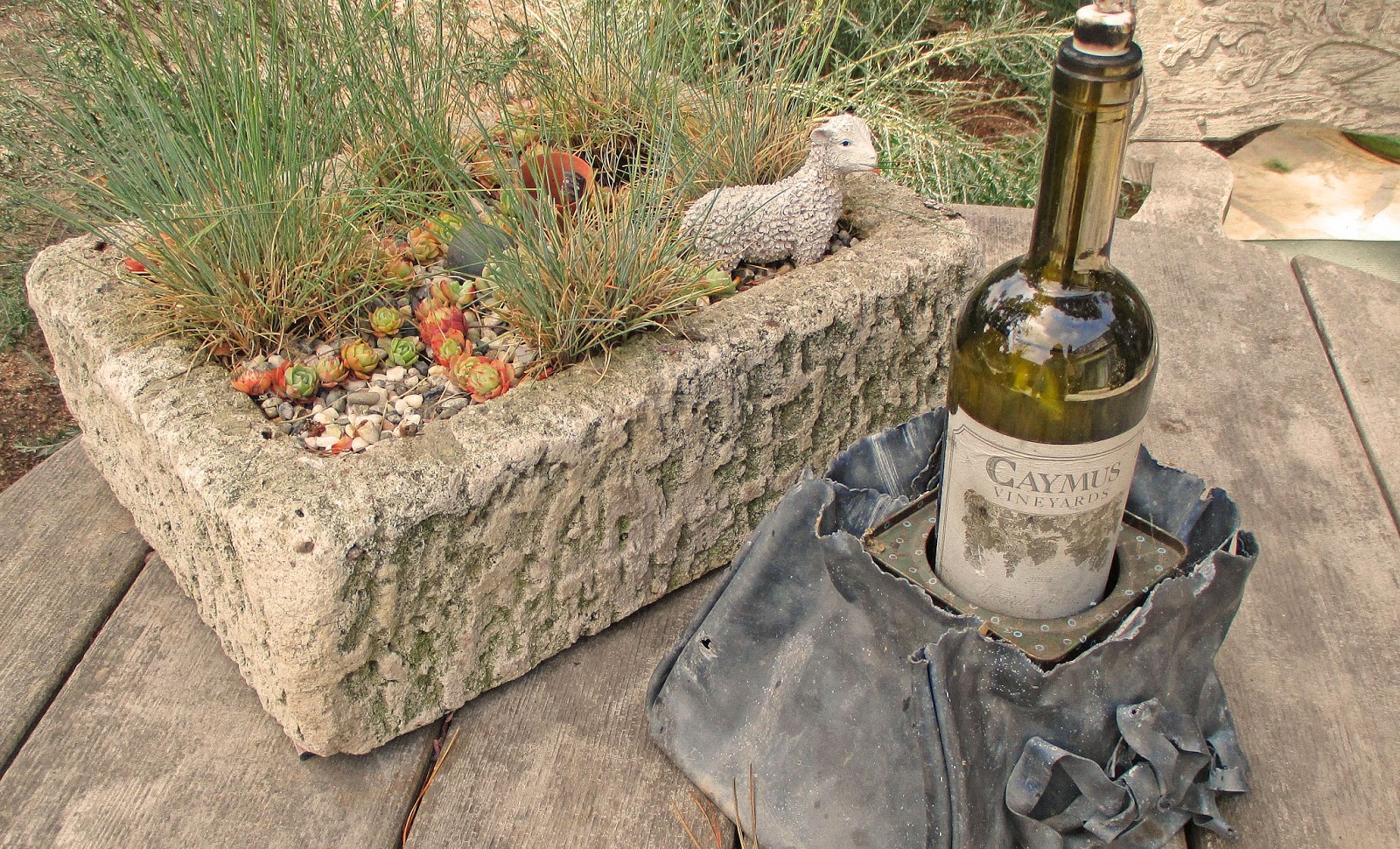 to the large spirit nest, a memorial to the homes previous owner, Brenda's love of whimsy is everywhere. 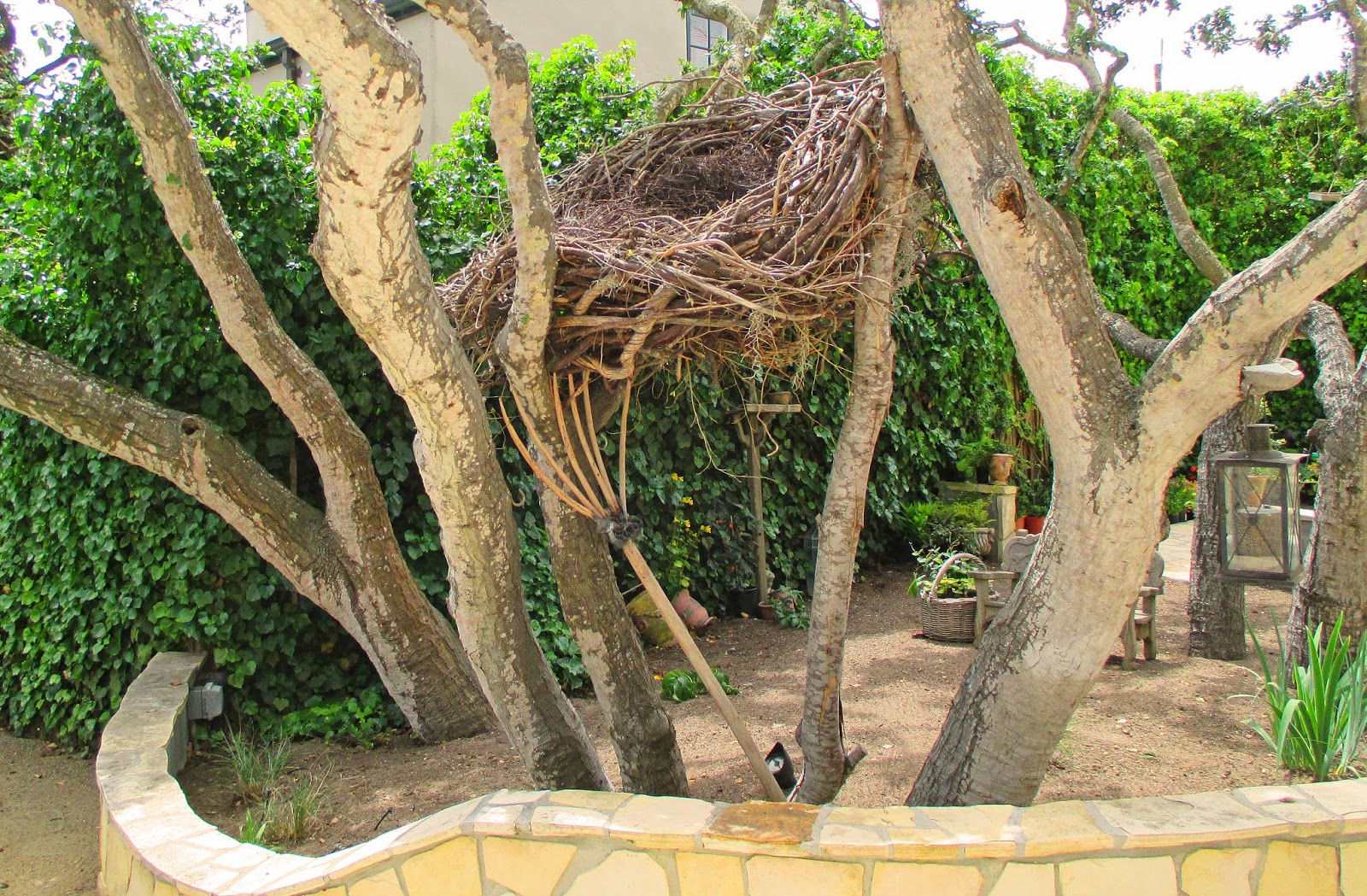 As I tour the garden, recorded mandolin music of Mike Marshall and Caterina Lichtenberg accompany my walk. Enjoy this video of Le Papillon gardens.


Next up, an artist's dream home, The House with the Red Gate and Cimarron a home with lovely Carmel Beach view.

- Black and white of adobe and wood house taken after 1921. (Kent Seavey, Images of America Carmel A History in Architecture, (Arcadia Publishing, 2007) p.17

- Black and white photo from 1929 - the Mission Tea House. Photo used with permission from Casa Q Events. Casa Q Events planned the dinner at Orchard House given in honor of the 300th anniversary of the birth of Blessed Father Junipero Serra.

Posted by Adventures of A Home Town Tourist at 4:36:00 PM