WHERE IN MONTEREY COUNTY?

Where will you find this quatrefoil window? 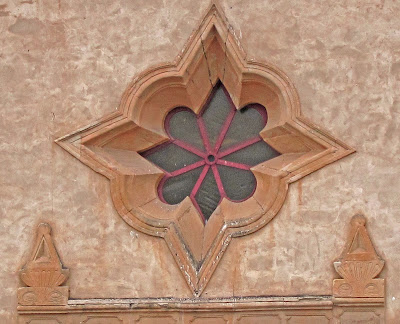 After arriving by ship at Monterey Bay June 3, 1770, Father Junipero Serra immediately erected a cross near an oak tree, hung a bell on the limb, began the formal founding of Mission San Carlos Borromeo the second mission of the province and celebrated its first Mass. The original setting was on the shores of Monterey Bay at the Presidio of Monterey. 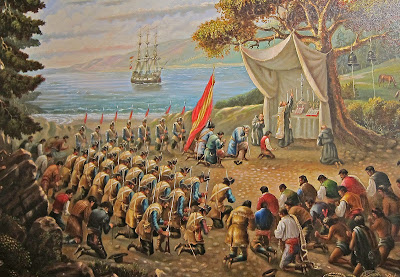 Because this site did not have the land or water to make the mission self-supporting and due to the undesireable influence of the soldiers stationed at the Presidio, Father Serra moved the mission site south in 1771 to its present location near the mouth of the Carmel River.
﻿

At this new location, Father Serra erected a cross where daily Mass would be held until the chapel could be built.
In 1938, Harry Downie, the curator in charge of mission restoration, discovered the remains of this cross shaft, and had the cross reconstructed and erected on its original site. 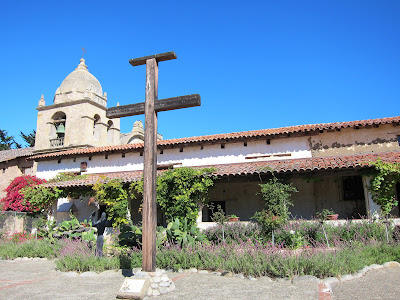 Father Serra died August 28, 1784, years before the Carmel Mission Basilica was completed.  Father Lasuen took over where Father Serra had left off, completing the original stone church in 1797. 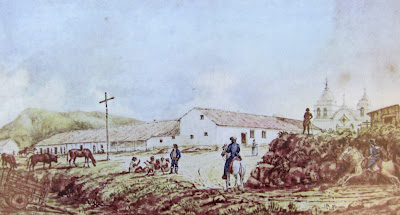 Thirty-seven years later the mission
lands were secularized and fell into ruins. 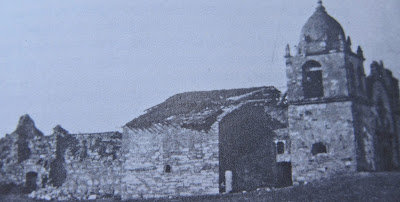 As a parish church, Mass continued to be held in the mission periodically until services had to be moved to the sacristy next door due to fear that the roof would collapse.  After Mass on November 4, 1852, the feast day of Saint Charles Borromeo, patron Saint of Carmel Mission Basilica, the roof did in fact cave in.   ﻿
But Carmel Mission Basilica would rise again.  On August 28, 1884 the 100th anniversary of Father Serra's death, Father Angel Casanova rededicated the mission with a new wood shingled peaked roof.
﻿ 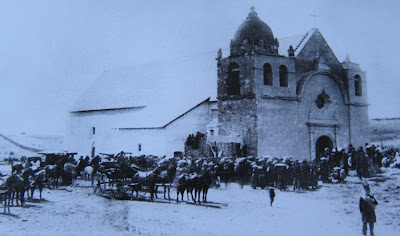 In 1931, Harry Downie would be appointed curator in charge of mission restoration.  One of the first jobs of the Restoration Committee would be to raise funds for rebuilding Father Casanova’s steep roof, which had fallen into disrepair, to the original 1790's design.
The quatrefoil window, a common Mission style architectural feature, can be found over the front entrance of... 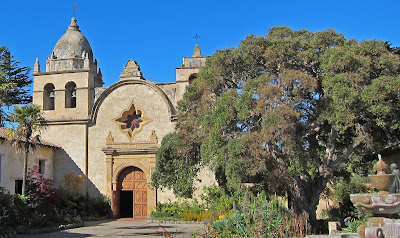