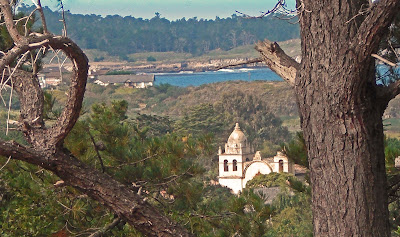 One of Carmel's Best Kept Secrets
On a late summer Saturday morning in September I joined a group at the entrance to Mission Trail Nature Preserve across from Carmel Mission for a “Nature and Historical Walk” led by Melanie Billig, President of the FlandersFoundation. Melanie has been graciously conducting these free walks during the spring and summer months for over 10 years. 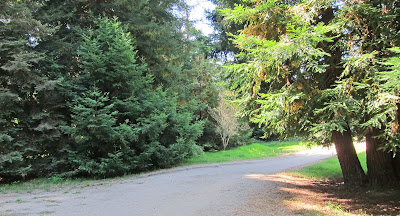 Footsteps of the Padres
“The Governor took the road to Monterey, going through a dense forest of pine where were placed many great crosses, significant of Christ’s suffering.  But they had not gone far before a band of choristers appeared, all wearing newly washed robes, attended by many young Indians in the dress of acolytes.  They were closely followed by the padres marching in two wings.”  (Californian Trails, Intimate Guide to the Old Missions,
Towbridge Hall, page 230) 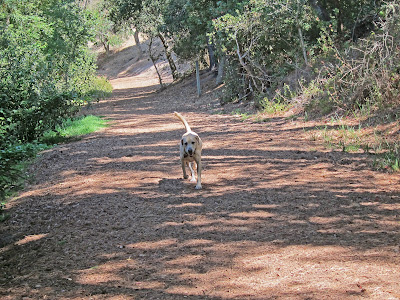 A year and a month after the founding of the Royal Presidio Chapel at Monterey in June 1771, Father Serra moved his church south six miles over a forested hill covered with oak, cypress, and pine to a marshy fertile area midway between the sea and the mouth of Carmel River.  For the next 50 years or so the Padres would tread a well-worn trail with their sandals, back and forth between Carmel Mission and the Royal Presidio Chapel in Monterey in order to conduct Mass, deliver or receive supplies. 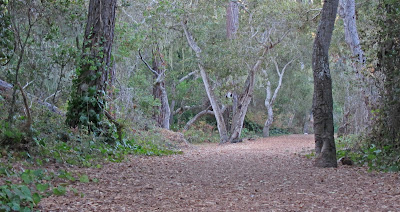 The area we would walk today in Mission Trail Nature Preserve is the only remaining part of the original trail traversed by the Padres that is not paved over by highway.  We were truly embarking on a “nature and historical walk.” 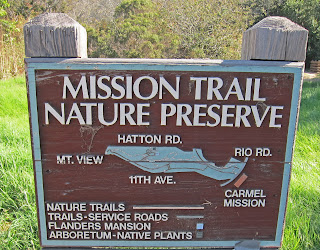 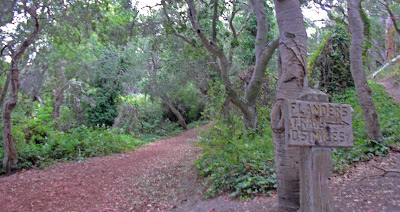 It is an all around peaceful, unspoiled area with five trails that meander through a forested canyon filled with majestic oaks, pines, willows, and redwoods. The smell of eucalyptus and wood chips permeate the fresh air, and the sound of songbirds fill the space between the branches overhead. This park is a true gift to the residents and visitors of Carmel.

We proceed to follow the wide Junipero Serra Trail in the footsteps of the Padres. As we walk Melanie explains the history of Mission Trail Nature Reserve . 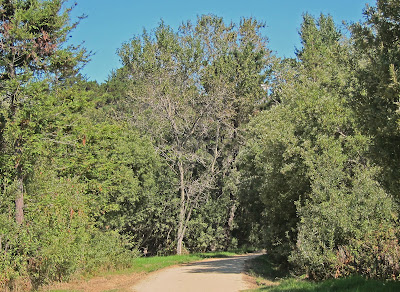 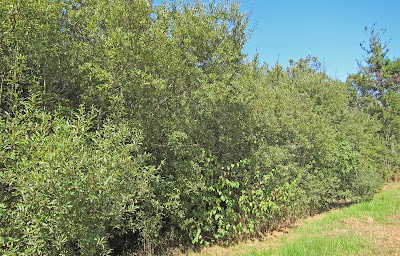 The lower region of the park is characterized by a riparian habitat or marsh-like environment created in part by the drainage areas of Carmel that converge upon the park.

This habitat will dictate which plants grow in this area.  In the lower park you will see dense areas of sycamores, willows and blackberries which provide cover for wildlife corridors. 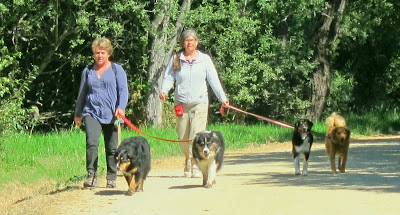 Many wild animals such as the mountain lion, bobcat, fox, deer, and opossum live hidden amongst the overgrowth of this riparian habitat.  They travel freely undisturbed between Carmel River, through the creeks and gullies of Mission Trail Nature Reserve on to Pebble Beach, Pacific Grove and beyond.  "You will rarely ever see them," Melanie assures us, "but there are there." 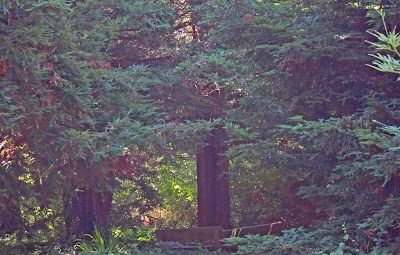 As we move along Serra Trail the lower habitat noticeably changes as redwoods planted by Mr. Doolittle tower above us cutting off the sunlight.  We have entered the upper region with an entirely different habitat filled with redwoods, pines and oaks. 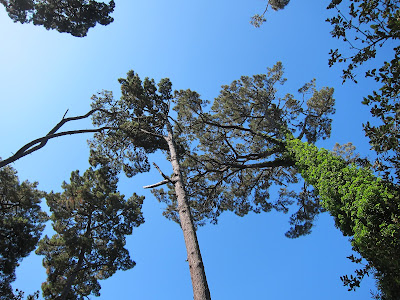 Many of the trees and ground are overrun
with invasive Cape and English Ivy.
It may look beautiful but not really good for the trees. The idea of bringing in goats to clear out the overgrowth along the ground has been raised. Apparently they even eat the poison oak which is rampant off the trail. Leaves of three leave them be..... 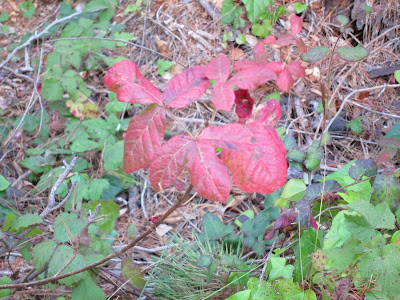 In a densely forested  area we come upon a stately mature oak tree with numerous limbs reaching out from its large split trunk.  There is no plaque, and nothing to call attention to the site, but Melanie explains that this tree was the location of the 13th Station of the Cross (Our Lord is taken down from the Cross). 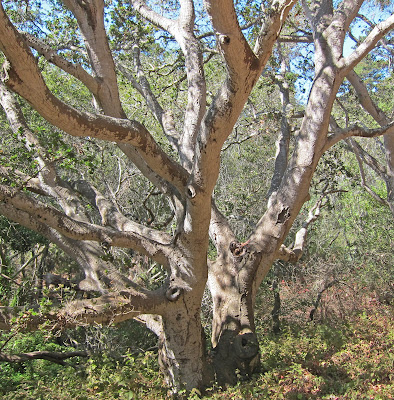 As the padres walked between the Presidio Chapel in Monterey and the Carmel Mission, they would pray the Way of the Cross a devotion depicting the scenes of Christ’s Passion. Towbridge Hall makes reference to this in his book, Californian Trails, Intimate Guide to the Old Mission when he writes, “…going through a dense forest of pine where placed many great crosses, significant of Christ’s suffering…”
I make note to look further into this. Is it possible that the other stations still exist unceremoniously unadorned and forgotten somewhere along the road to the Presidio Chapel in Monterey?  The tune of the Stabat Mater fills my mind as I imagine the padres slowely and prayfully singing between stations...
At the cross her station keeping
Stood the mournful Mother weeping
Close to Jesus to the last... 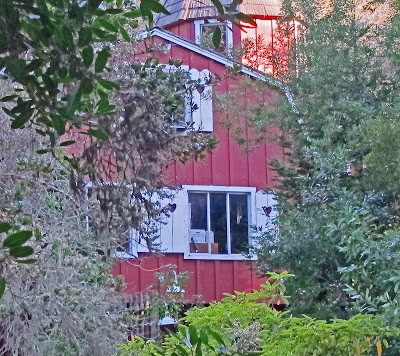 We continue along the Serra trail spying houses camouflaged by the overgrowth.  When you see the red barn house on your left with white shutters adorned with heart cut outs, look right and you will find the path splits in two.  Take the higher road to Flanders Mansion.

For an interactive map from GPSmyCity for this blog post please visit this site.

Posted by Adventures of A Home Town Tourist at 5:00:00 PM