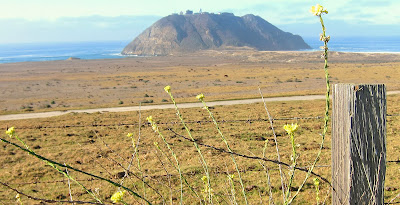 Gray whales have the longest known migration of any mammal, traveling around 10,000 miles round trip between the Arctic and Mexico every year.  During their migration, the entire Gray whale population migrates within three miles of the Monterey coastline every winter and spring, as they pass through the Monterey Submarine Canyon to feed.  January is peak season for observing their migration south.  And Point Sur is a perfect on land observation post. 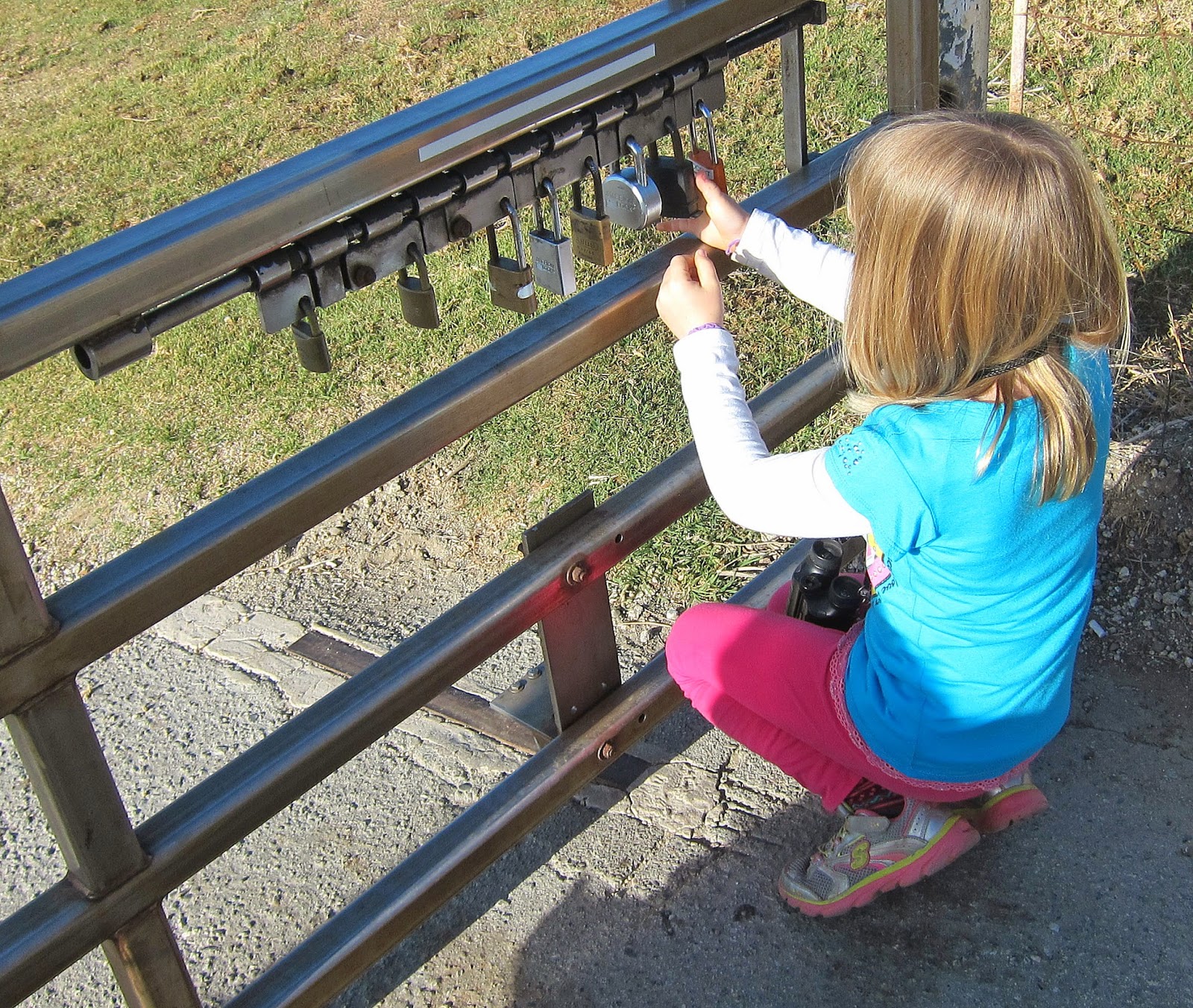 Our tour starts at the multi-padlocked gate 18.6 miles south of Rio Road on Highway 1.  This is where we wait for docent tour guides from the Point Sur Lightstation to met us.

Docents direct our caravan to follow the road which cuts through an area covered with low sand dunes,  European Beach Grass, and 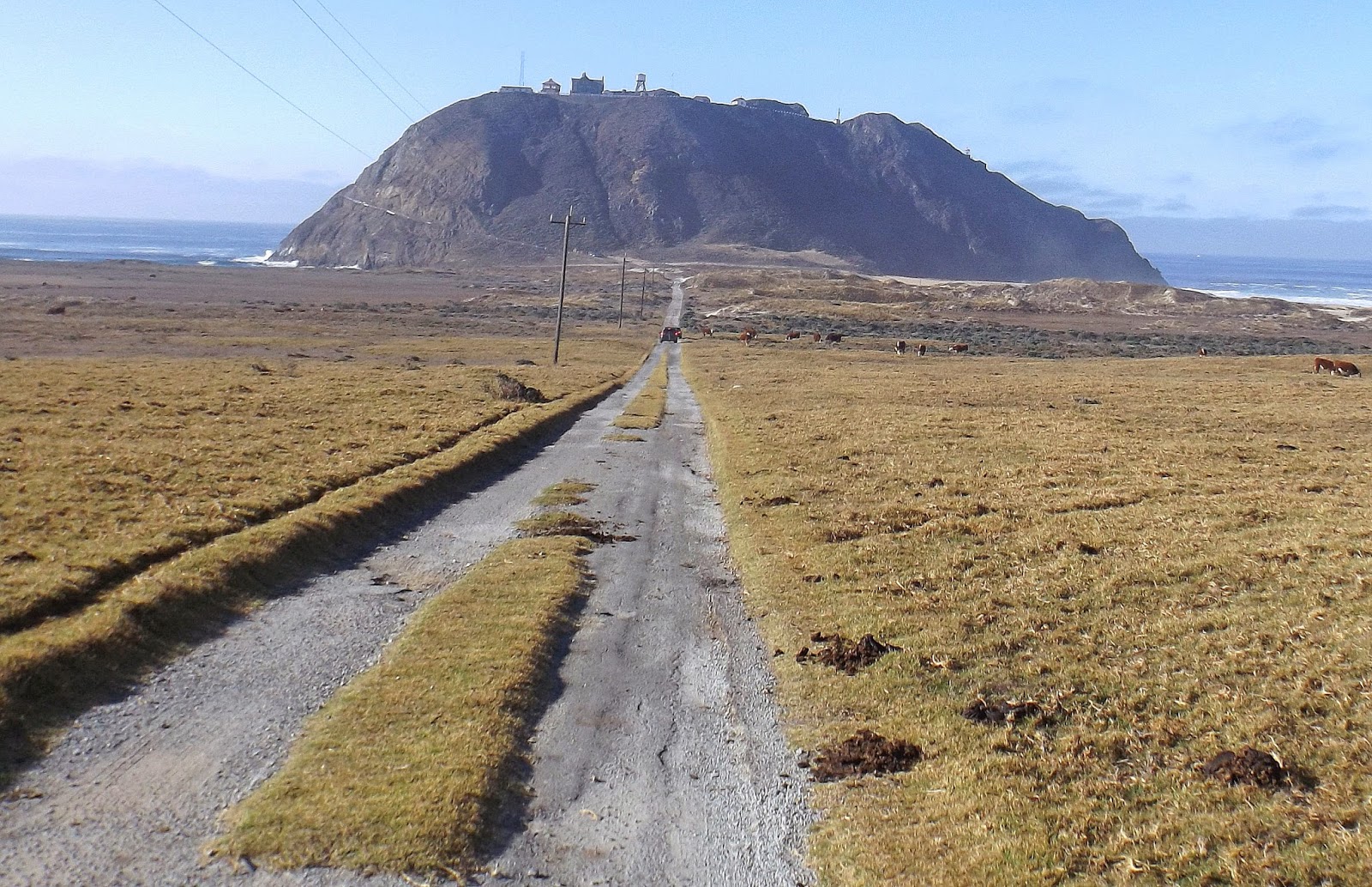 cattle from El Sur Ranch who appear to be our greeters. No car gets passed #158 without his okey dokey. 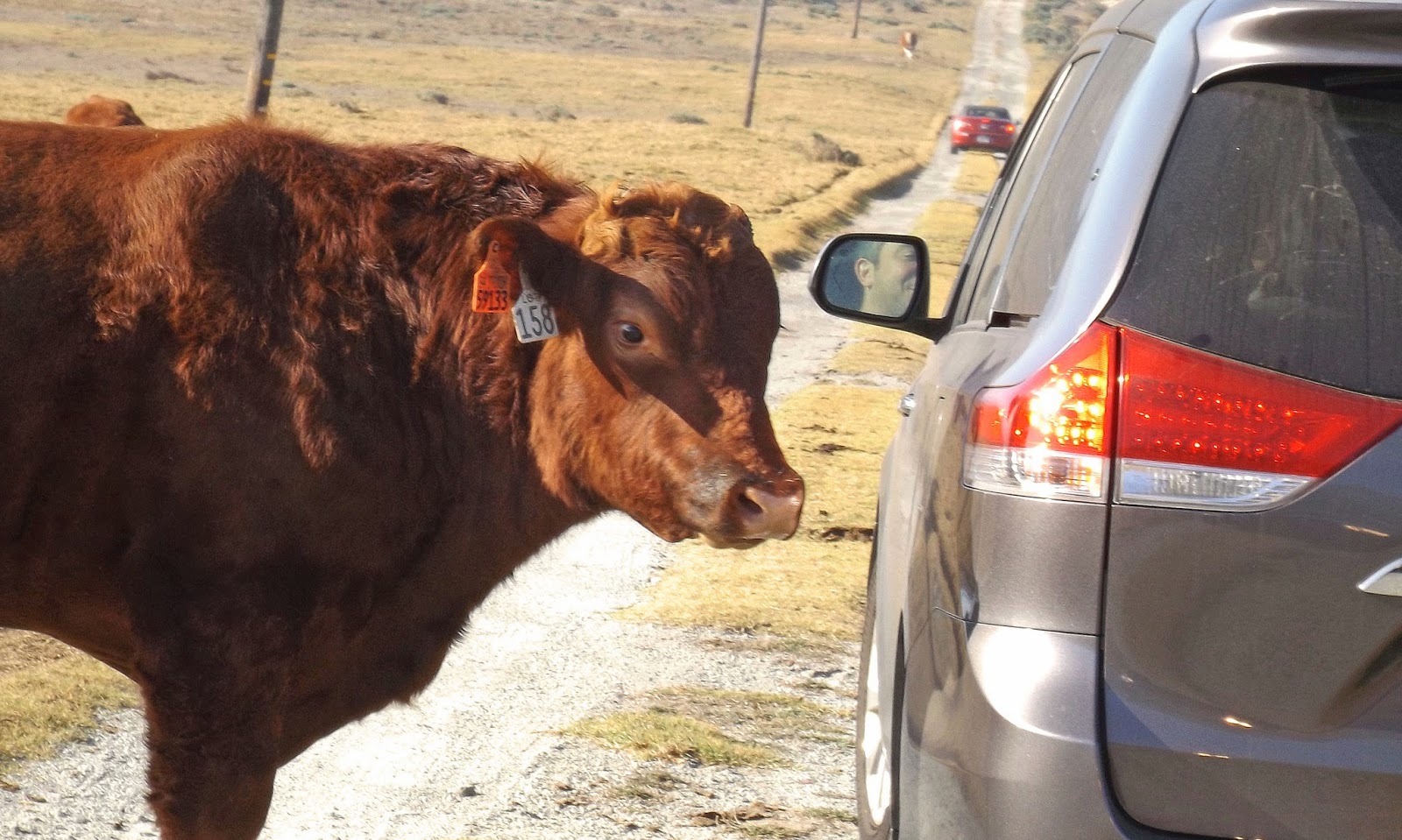 Since 1955 the now 7,000 acre ranch is owned, run, and preserved by the Cortlandt Hill family. The Hill family granted an easement to the State Parks System across their ranch from Highway 1 to the lightstation.  It is this easement that makes it possible for our cars to reach the base of Point Sur headlands. 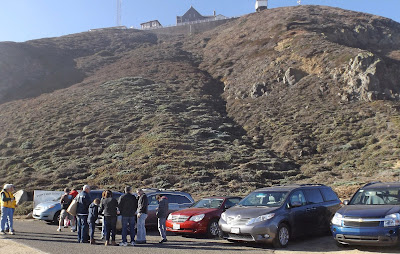 Access to Point Sur is by guided tour only, reservations are NOT accepted.  The number of people is limited for safety reasons and to preserve the sense of isolation.  Arrive early to this California Registered Historical Landmark #951, it is worth it. 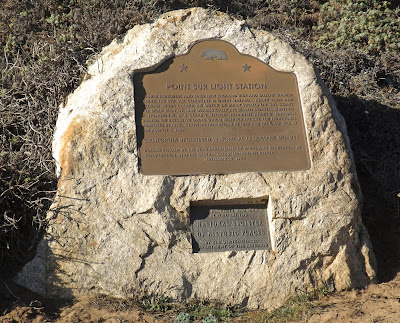 After our cars are safely backed into the hill we meet our guide, docent John O'Neil.  He prepares us for our hike, 1 mile round trip, with a 360 foot elevation gain, one spiral staircase and one steep stairway with two parts, the longer having 61 steps. 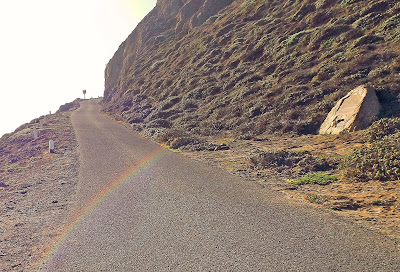 HISTORY
Point Sur Lightstation sits on top of a large rock that has been a mariner’s landmark since the days of the Spanish explorers.  The rock was first sighted by Juan Cabrillo in 1542 and Viscaino described it as “a point that appears as an island,” in 1602. 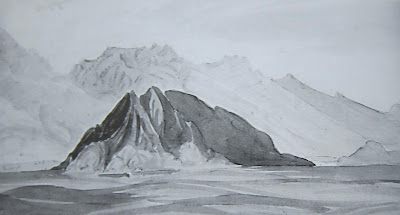 After California became a state in 1850, a survey of the coast was ordered and taken by the Navy. The large rock mariner's landmark became "Point Sur" taking its name from the land surrounding it, El Sur Rancho.

In 1866 President Andrew Johnson reserved this site for a lighthouse.  But funds were needed for construction. One of the factors in attaining the funds would be the wreck of the Ventura in 1875. Between 1886 and 1887, Congress would appoint $100,000 for construction of a much needed lighthouse.

But before anything could be built, the top of the rock (about 80 feet) had to be blasted off to level space for construction. The buildings were finished in 1889 and the light lit on August 1, 1889. Point Sur, known as a lightstation rather than a lighthouse because there are multiple buildings on the site, has been in continuous operation ever since. 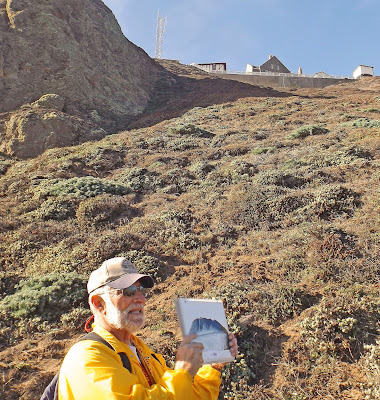 One of the initial construction problems was how to get materials up the 360 foot grade without a road.  The decision, build a hoist railway from the beach, up the southeast face of the rock, and across the top of the rock between what is now the head keepers quarters and the assistant keepers quarters.  The picture above shows the area today. The picture below shows the area around 1889 after the railway was built.

Next to the railway a set of 396 stairs was constructed. Those people who worked or lived on the lightstation used these stairs daily.

In fact everything made the trip to the top of the rock via the railway or the stairs.  That included all the stone used to build the structures on Point  Sur and the equipment necessary to run the lighthouse.

The stone, originally quarried in the valley of the Little Sur River, was brought to the base of the railway by wagon. Most of the equipment came from San Francisco by ship, making difficult beach landings before offloading their cargo.  The Fresnel lens came from Paris by ship, making its journey without breaking even one of its 568 glass prisms. 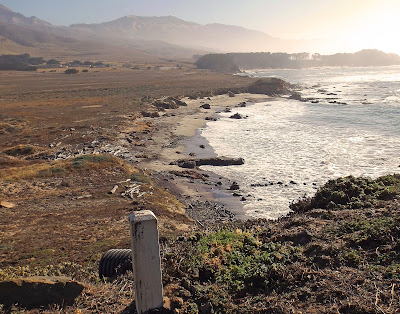 The beach and the buildings in the pictures above and below, part of the Point Sur State Historic Park, have an interesting history.

In 1993 the Naval Postgraduate School established the Ocean Acoustic Observatory at the former Naval Facility for the purpose of undersea research.

Now back to the railway. By 1900, many of the components of the system needed to be replaced. The expense of these parts led to the abandonment of the hoist railway system. It was time for a road. 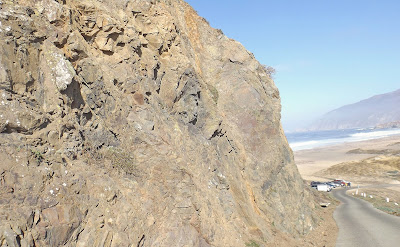 Men used pick, shovel and dynamite to clear space in the near vertical sides of Franciscan Greenstone to build the road we walk on today. 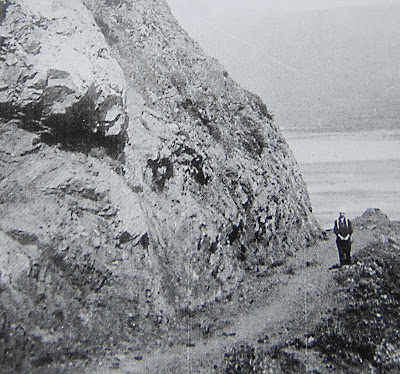 The road remained dirt (see picture above) until 1984 when it was finally paved. With the road, supplies could be shuttled from the beach by horse and buggy up to the top of Point Sur.

But beach landings were still a challenge for supply ships. So engineers began looking for a place on the side of the rock below the road to build a platform.  On this platform they would build a docking system that could lift supplies directly from the water.

Around 1915 once again the rock
was blasted and a ledge
cut to support a platform. 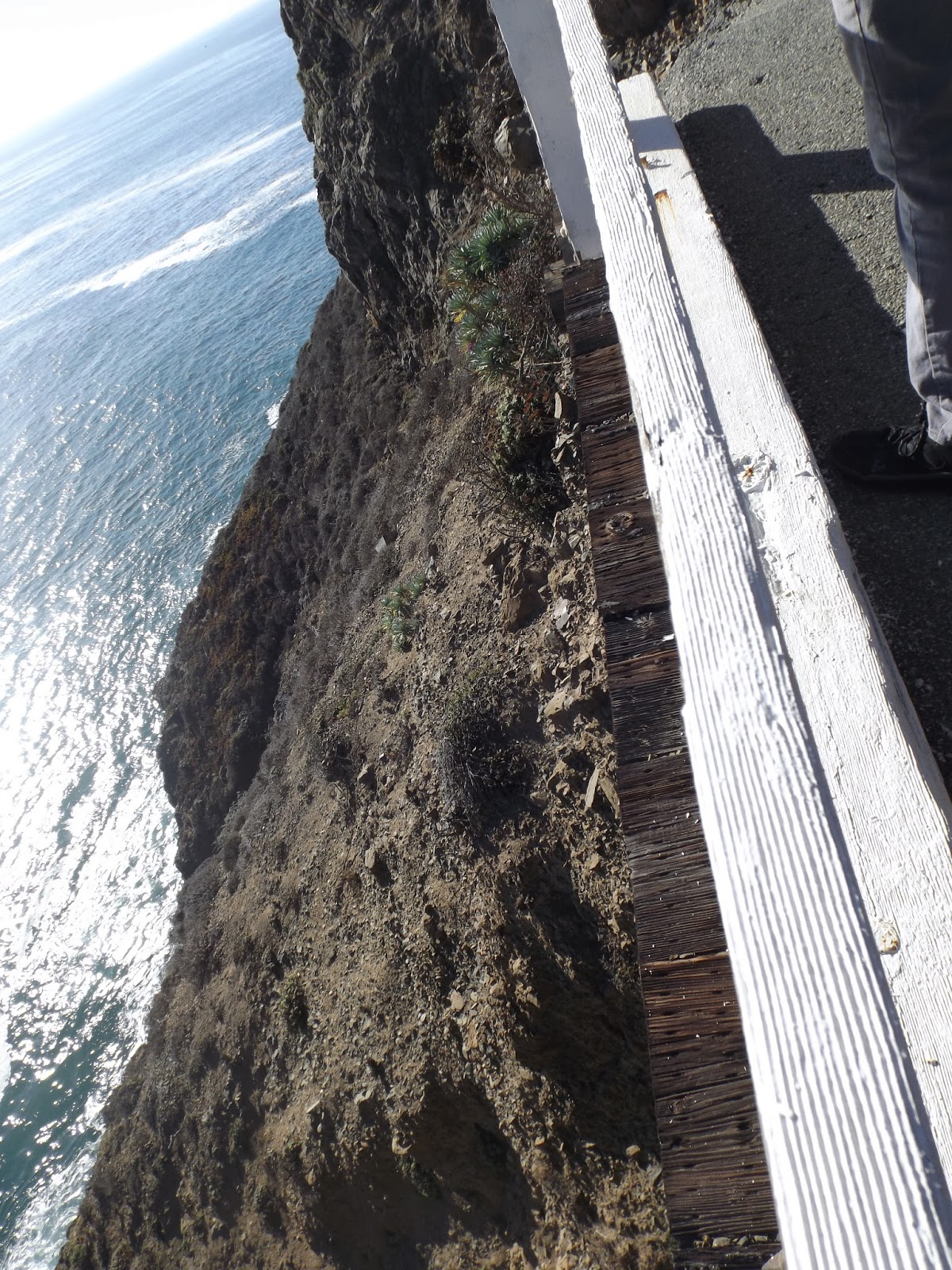 The picture below shows the platform, along with a new railway that would be used to transport the supplies from the landing to the road.  Supply ships would no longer have to navigate beach landings. 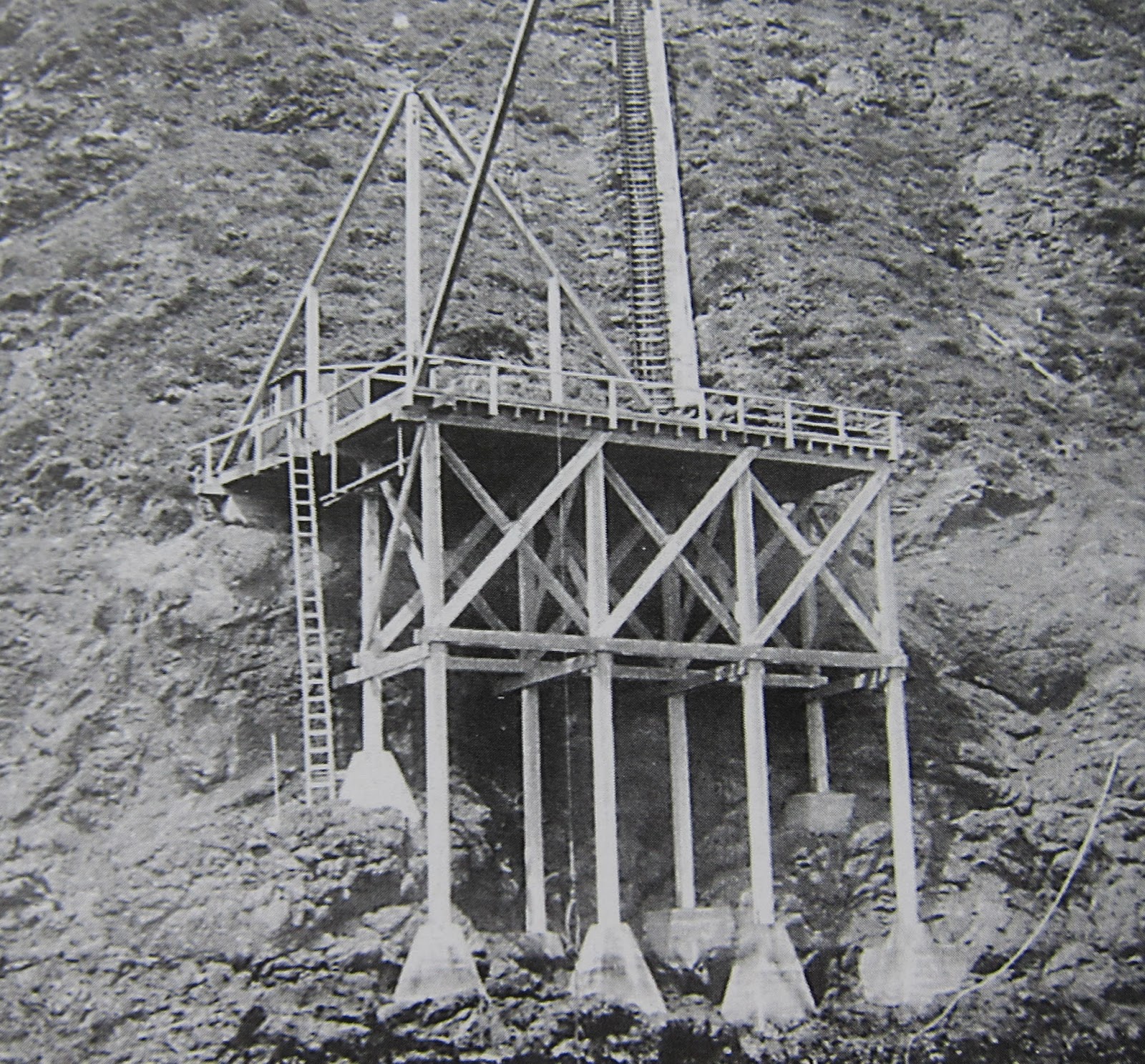 Now ships off-loaded their supplies (packed in barrels that would float, in case they fell into the water) into small rowboats.   The boats pulled near the platform and attached the barrels to a long arm which swung out over the sea.  The barrels would be lifted to the platform, loaded on the tram car, and shuttled to the road. Needless to say, getting supplies to Point Sur was an arduous task.

SPOUT!
As our group continues up the road, someone calls out "Spout!" The Gray whales have begun to show themselves.  "Typically," our guide explained, "when Gray whales come up for air, they blow out water and get in fresh air.  They do this three to five times in a pattern for about a minute then you will see the fluke before they begin their dive."  More spouts would be spotted, and one fluke, as we made the accent to the lightstation. 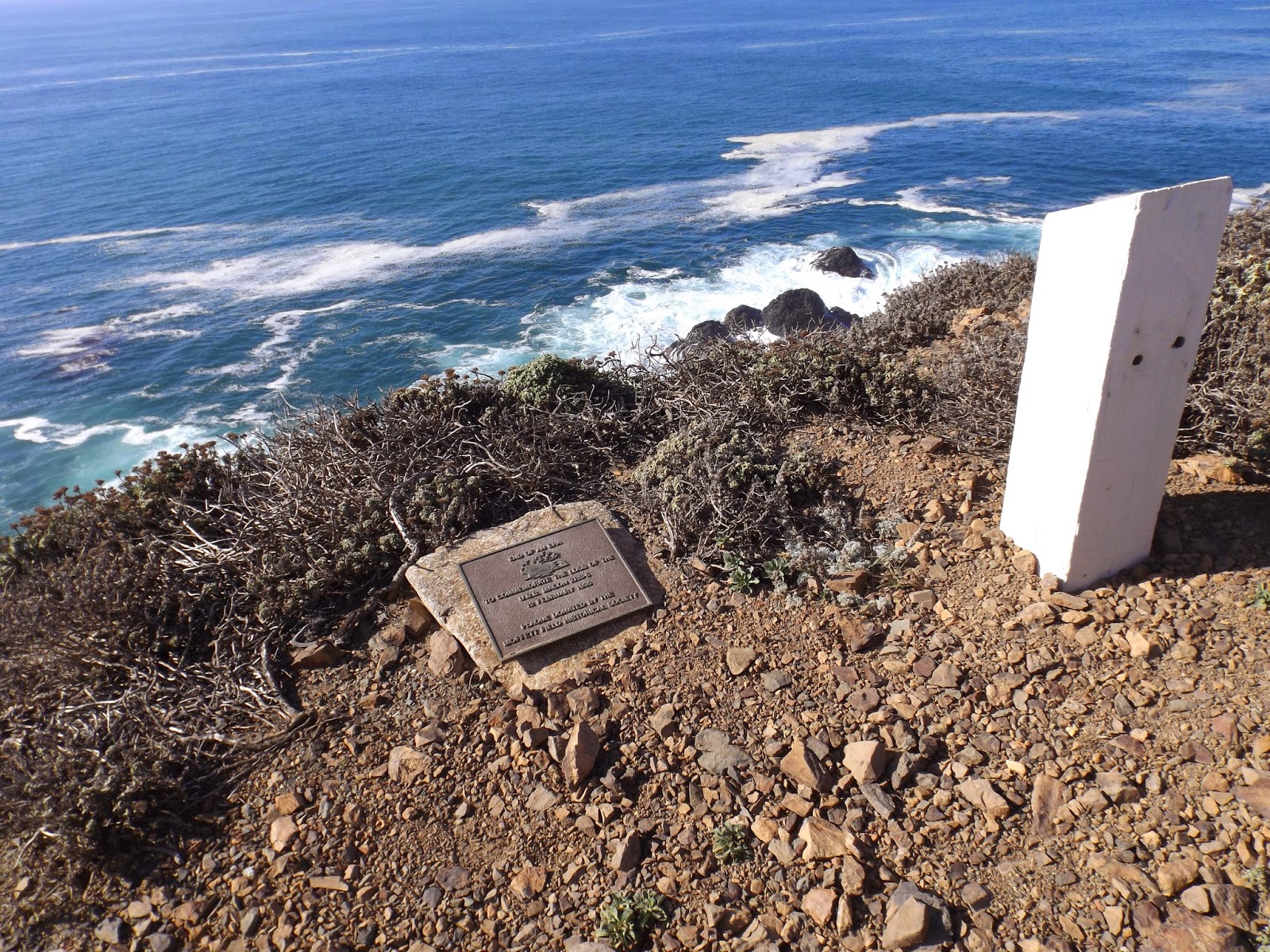 SHIPWRECKS
Our next stop was to view a memorial plaque for the USS Macon which crashed in the waters off Point Sur in 1935. 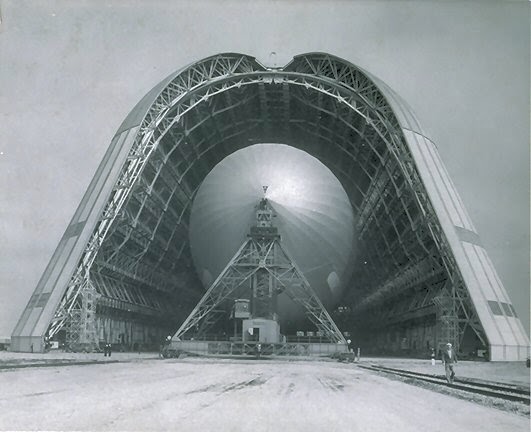 This brought history home for me.  Living in the Palo Alto/Mountain View for 51 years Moffett Field was literally in my backyard.   I was fascinated to learn that the Hanger One I passed on a regular basis was built for the USS Macon. 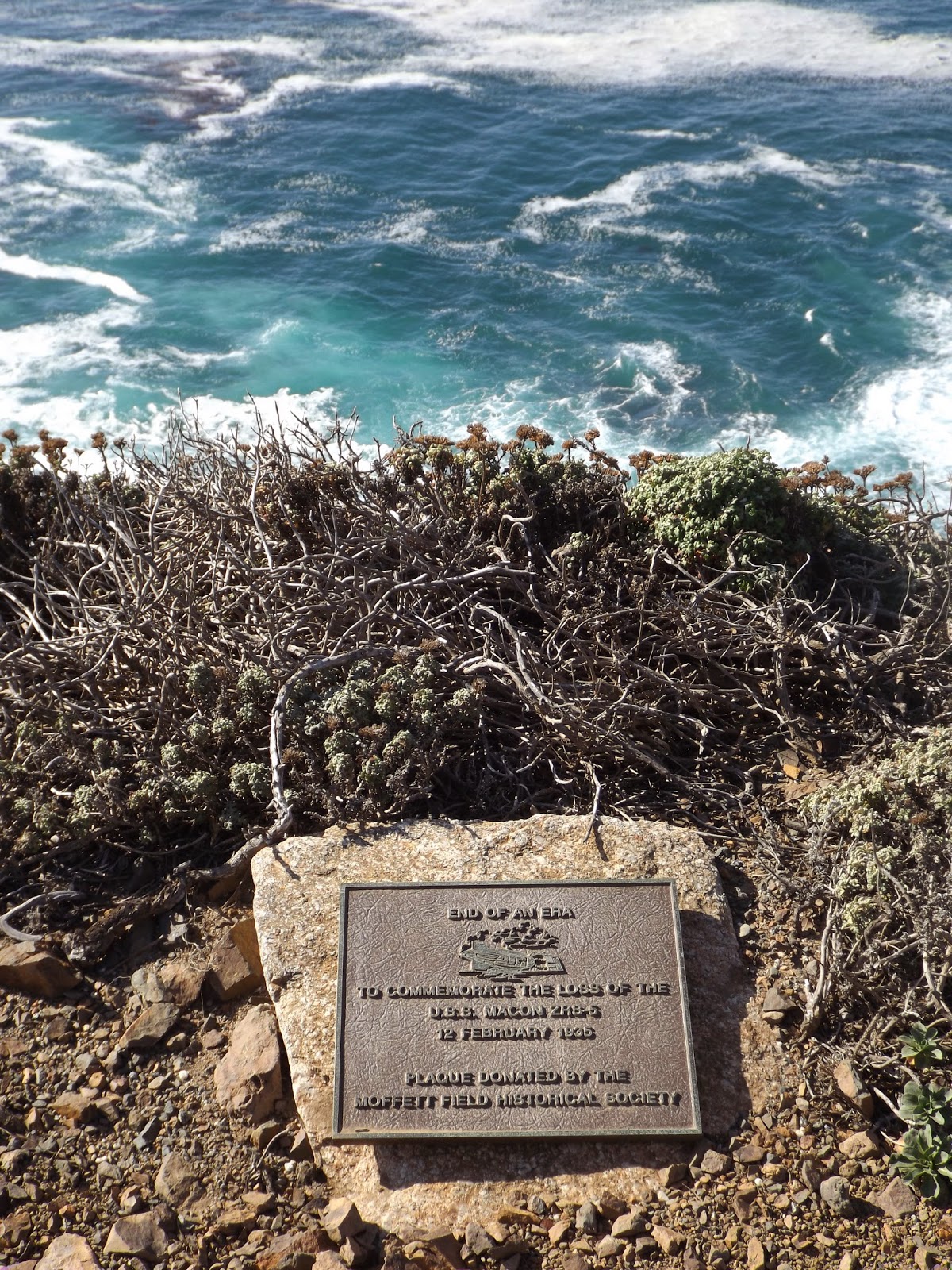 In 1935, during a cross country trip, the USS Macon damaged all four of its tailfins.  Two were repaired before the ship returned safely to Mountain View.

On February 12 while returning to Mountain View from fleet maneuvers, (the other two tailfins had yet to be repaired) the Macon ran into a storm off Point Sur. Wind shear would cause structural failure to the unrepaired tailfins.

Knowing they would have to ditch in the ocean, the Macon rose to an altitude where it could release helium to allow the craft to descend gently into the sea.  The Macon sank off Point Sur. On June 24, 1990, the wreckage of the USS Macon was located off Point Sur by the U.S. Navy submersible Sea Cliff. 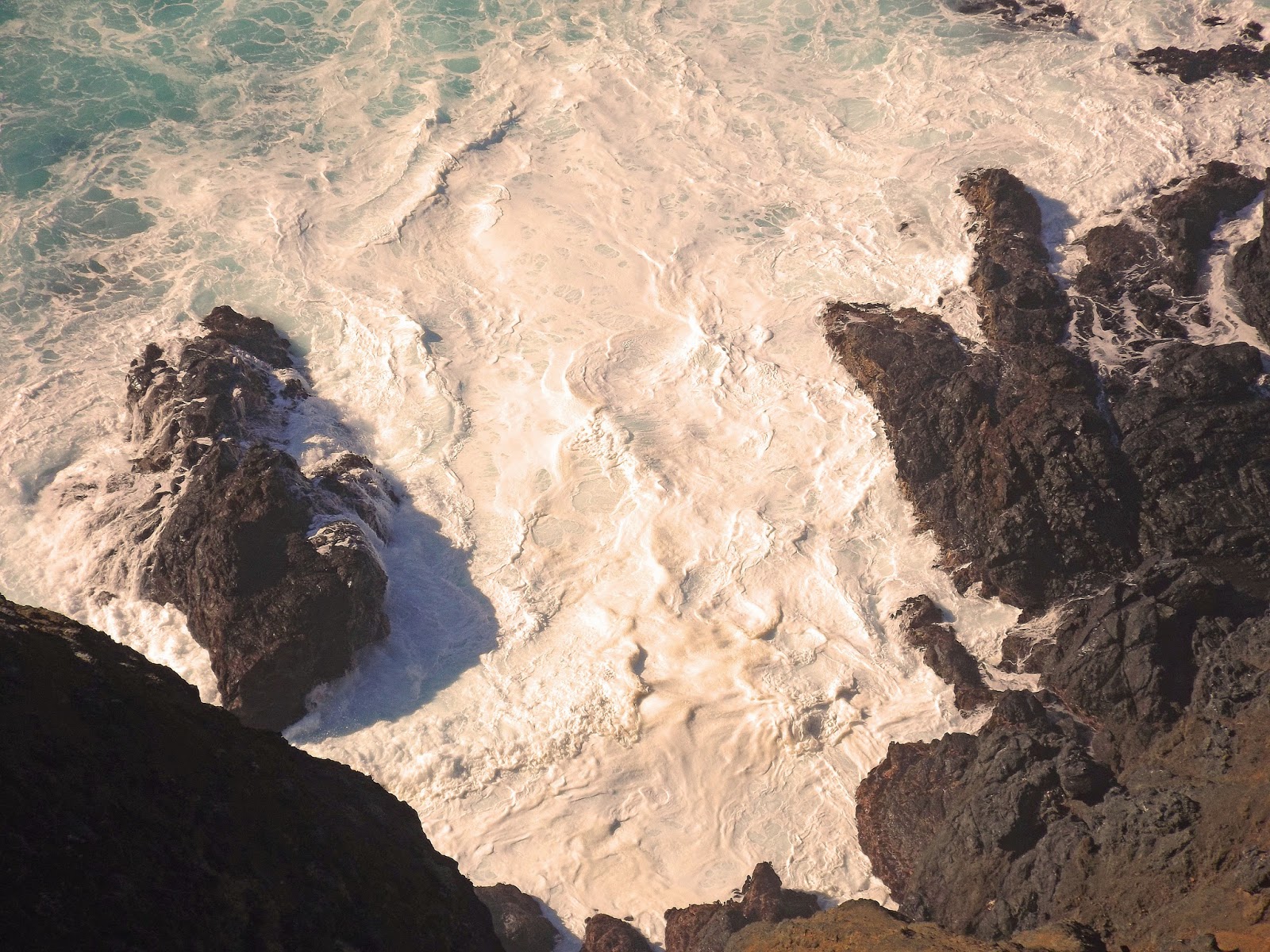 Our guide John informs us that besides the USS Macon there have been a number of shipwrecks off Point Sur, enough to earn this point the title "Graveyard of the Pacific," and that "once we turn the next corner we will have left civilization behind, just whales, the bark of sea lions and sometimes a sighting of a porpoise or killer whale." 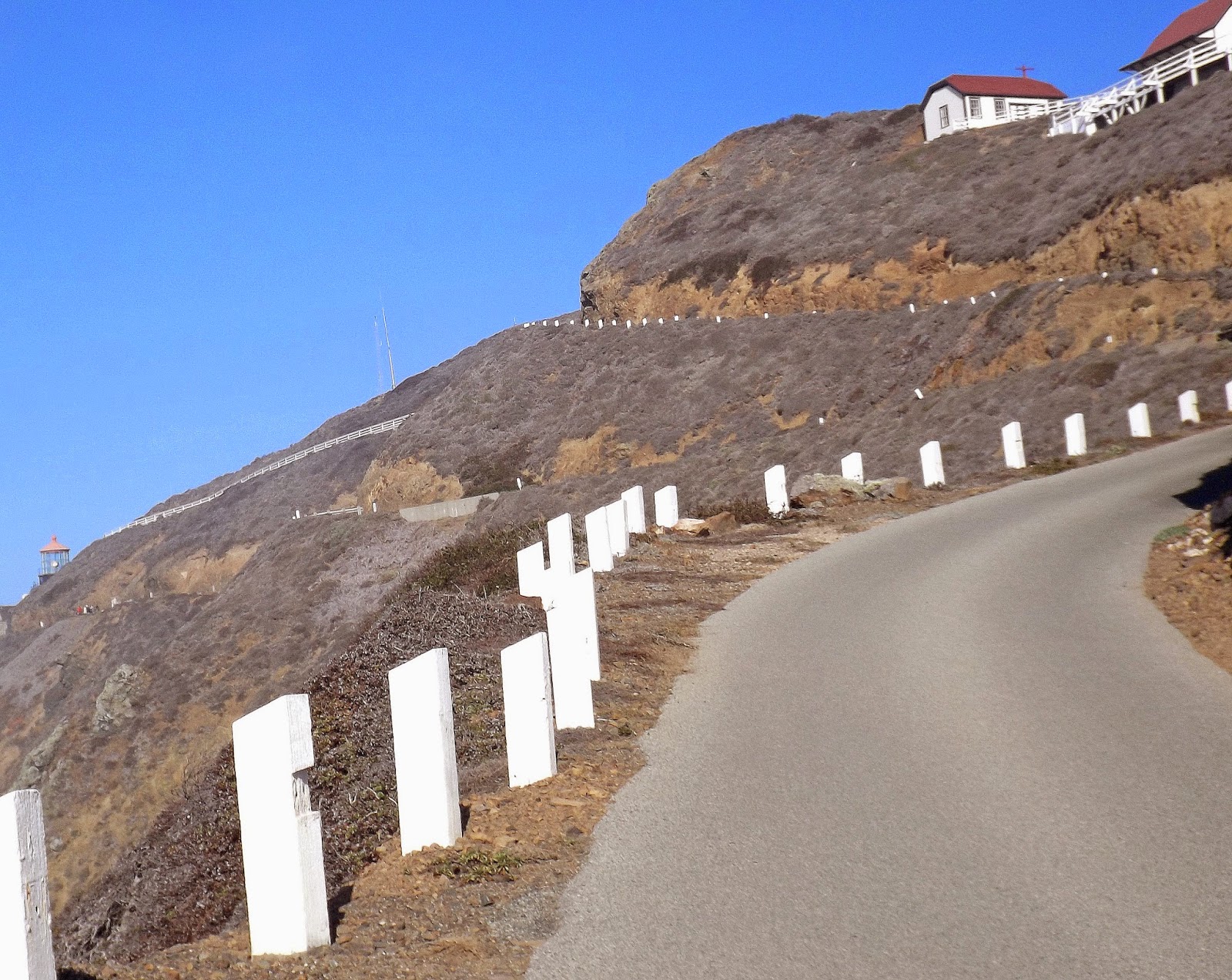 LIGHTSTATION
In the distance (above) we finally spot the lighthouse (far left), carpenter/blacksmith shop (second from right) and barn. The picture below shows same the location c. 1929 with the original narrow roads. 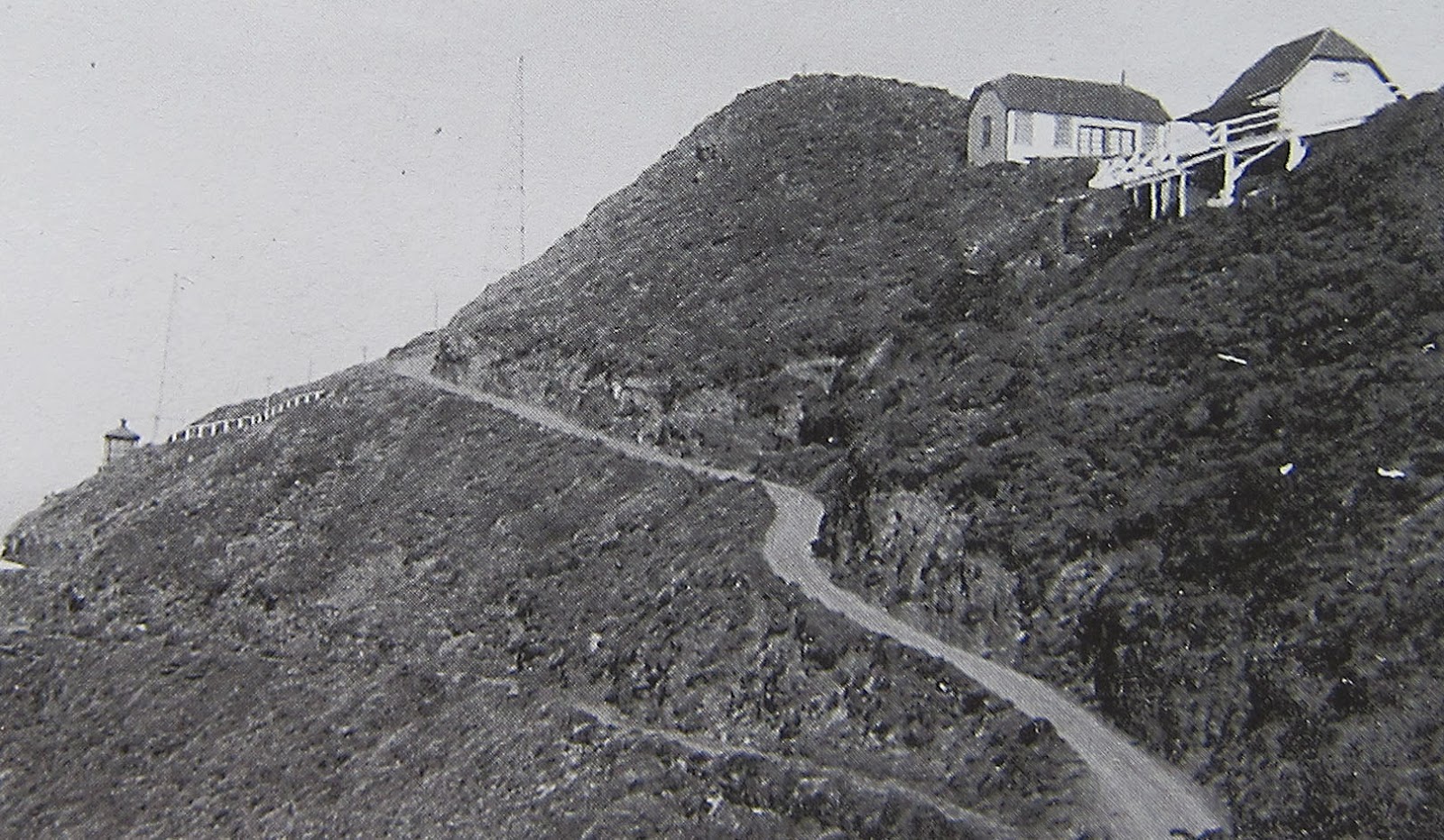 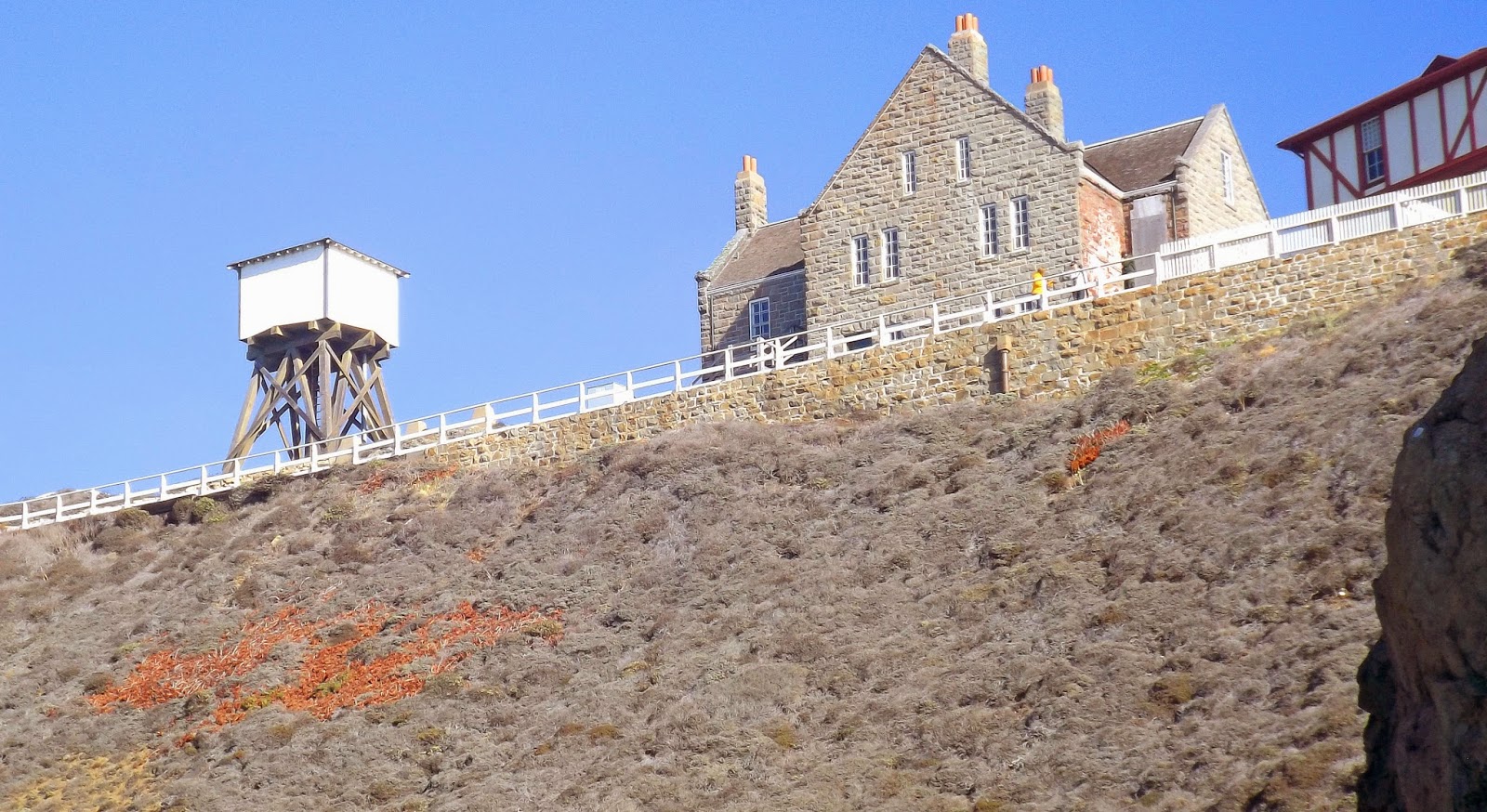 At the fork our hike will continue along the lower road which has been blocked to cars and trucks. 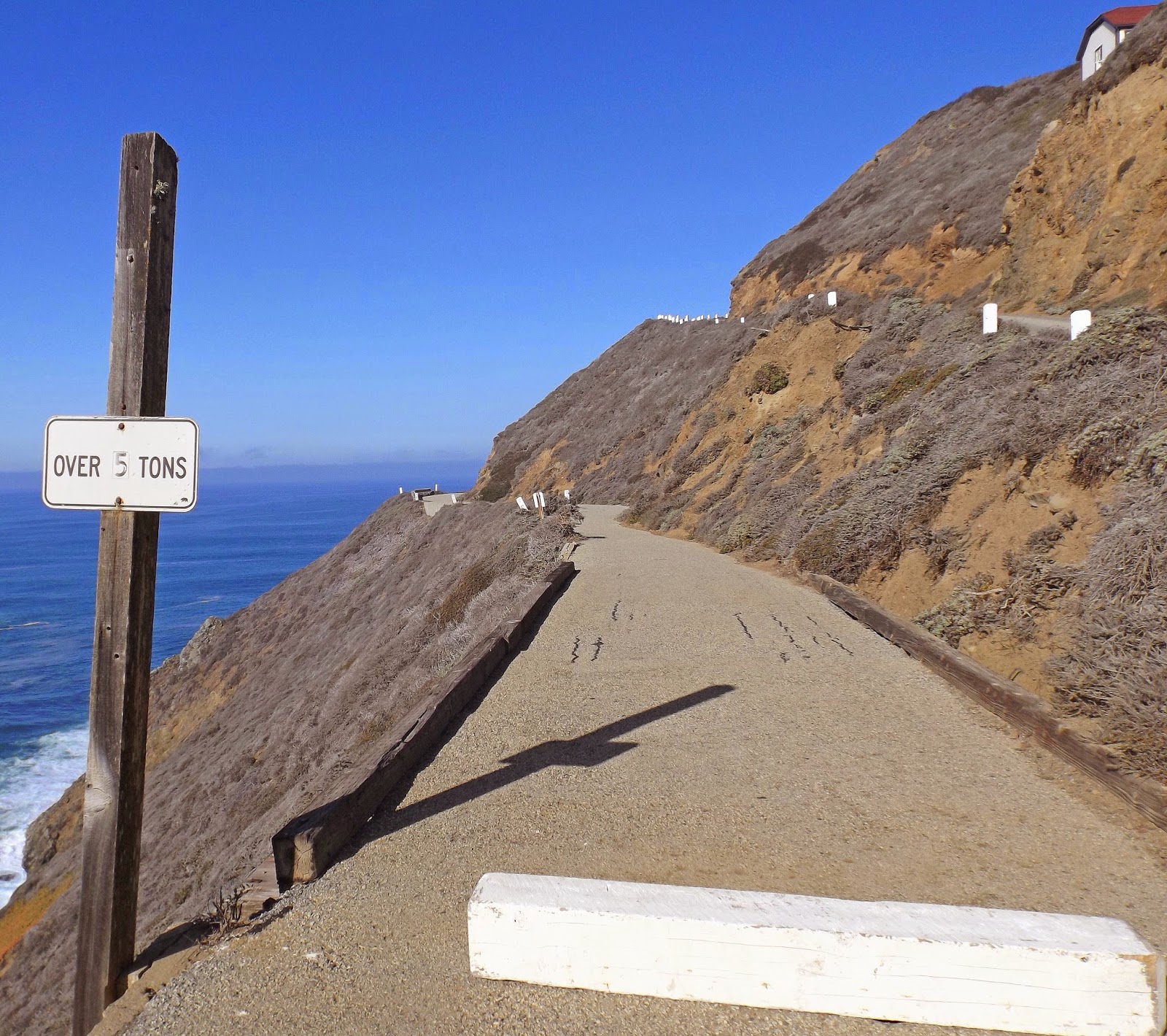 It is clear that there is not much flora on Point Sur, yet John is quick to point out Point Sur's forest, one lone Monterey Cypress.  "It is a very harsh environment for plants.  When you get up to the top you will notice most of the plants are very low to the ground, that is because the wind here averages 25 miles an hour 24 hours every day.  So on a day like today when we have almost no wind and perfect viability, we are going to have a day with 60 mile an hour winds to balance it out. And that will keep the plants down.  It is what we call wind pruning."

The light keeper would gather the kerosene in a brass pitcher and take it up to the lighthouse to light the station. 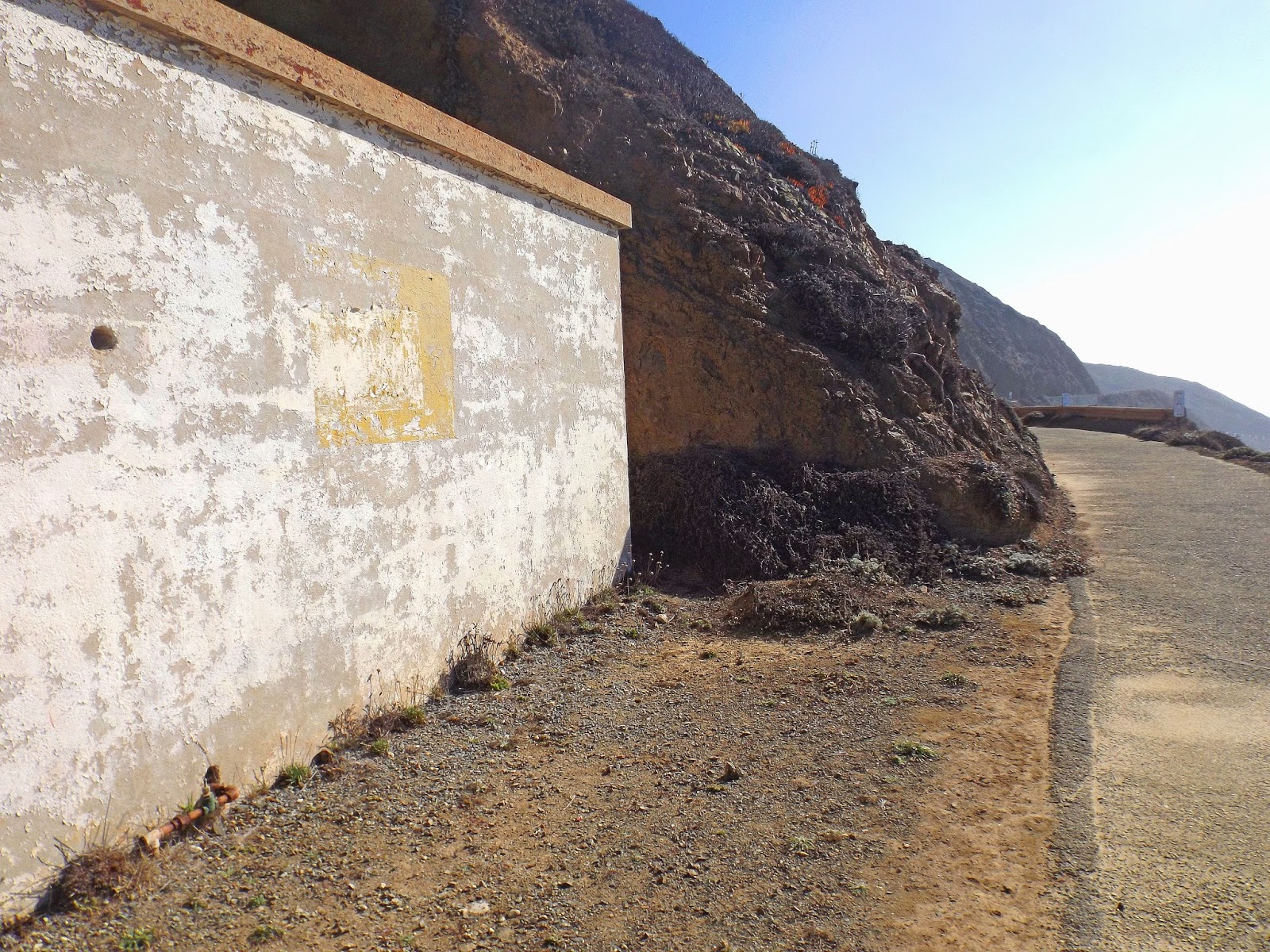 Just a few hundred yards and we will be at the lighthouse. The aerial photograph* below shows clearly the path for our hike. On our accent we took the lower road on the far west side of Point Sur. After viewing the light house we will climb two sets of steep stairways then further ascend about 1/4 mile to the blacksmith/carpenters. Thanks for visiting.  Happy Adventures!