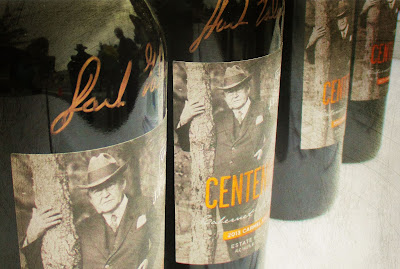 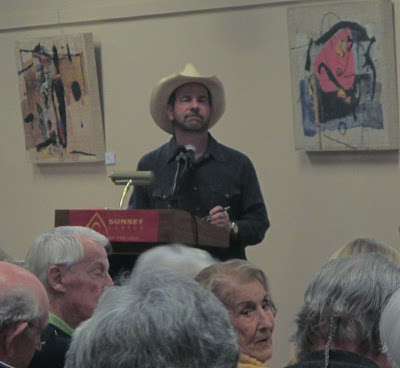 Owner, along with his wife Dawn, of Galante Vineyards and Dawn’s Dream Winery, Jack was quite at ease in front of the standing room only audience filling Carpenter Hall at Sunset Center.  For an hour he entertained us with stories and pictures that left us all with an intimate image of his great-grandfather. 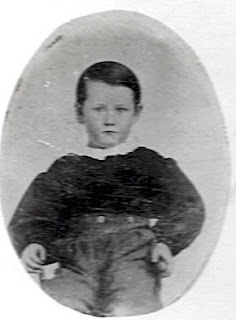 James Franklin (Frank) Devendorf was born  April 6, 1856 in Fallsburg, Michigan, the third child of Thomas Jefferson Devendorf and Grace Congdon Devendorf.  When Frank was three, his father was "killed by a car."  Our speaker Jack Galante is quick to tell us that this undoubtedly was a train car since the automobile had not been invented.

In 1864, the widowed Grace married  Methodist preacher, A. W. Gray, and moved out west. By 1874 Gray had died and left Grace once again widowed.  Unable to support herself, she sent for her 18 year old son Frank.

Prior to coming to California, Frank had planned on pursuing a career in law. But as the eldest, and only son, it was now his duty to take care of his mother.  Plans for a law career would be no more, and Frank would take a job as a clerk at Hale's Bros Department Store in downtown San Jose. 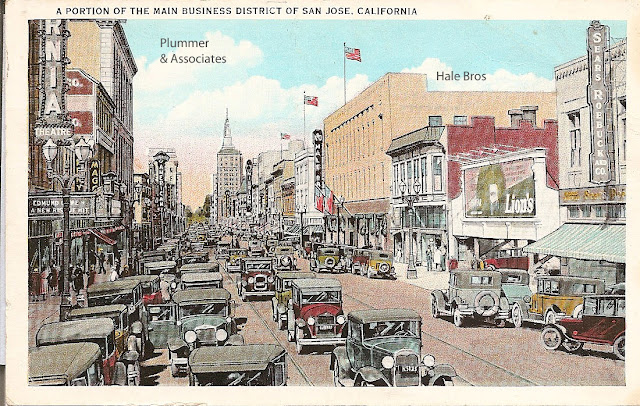 It was during those first years in San Jose that Frank contracted tuberculosis and was advised by his doctor to seek work in the outdoors.

In 1876, the twice widowed Grace married Captain Joseph Aram. And just who was Captain Aram? Born in New York in 1810, Aram eventually moved to Illinois.  In 1846, during the Mexican-American War, he left Illinois and enlisted under the short lived Bear Flag Republic (June 14 - July 9, 1846).  That same year Major Fremont took control of California from the Bear Flag Republic and he sent Captain Aram to protect the settlers at the Santa Clara Mission.  Aram was also sent to Monterey to help construct a fort.  After the war he settled in San Jose.

After the marriage of Grace and Captain Aram, the captain became very fond of his step-son Frank, influencing him greatly.  Jack Galante notes that it was probably the captain who first introduced Frank to the Monterey Peninsula. And this does make sense - as Aram was familiar with Monterey. 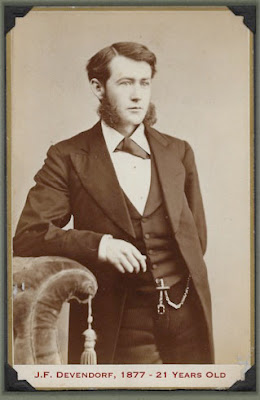 By 1877, Frank had fallen in love.  The young woman three years his junior was Lillie Potter, a music student at the College of the Pacific in Santa Clara.  Frank and Lillie married in 1879.

Jack states, "We aren't sure where he [Frank] worked all those early years, but in that era, a conscientious young man did not assume the responsibilities of a wife and family until he was able to provide the necessary support; and a loving father did not allow his daughter to marry unless he was assured that his future son-in-law was able to do so.  So we have to assume that by age 23, he [Frank] was gainfully employed.  The earliest indication...found relating to his employment was an 1883 announcement, at age 27, of the opening of a subdivision in San Martin and Morgan Hill.  A. L. Burbank and J. F. Devendorf are listed as agents." (1) 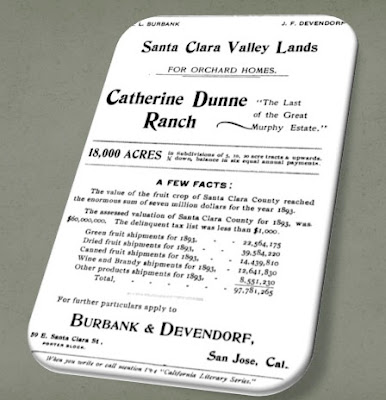 So from this we can conclude that Frank had gone into real estate in order to support the family that he and Lillie would soon have. 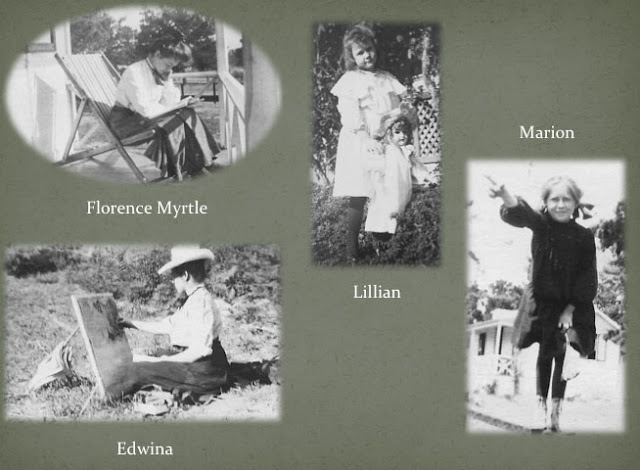 Frank and Lillie had five daughters.  Their first daughter Grace died in childbirth.  Their second, Edwina was born deaf and mute in 1881.  She became an accomplished painter and sculptor. A bronze bust she made of her father resides in Devendorf Park. 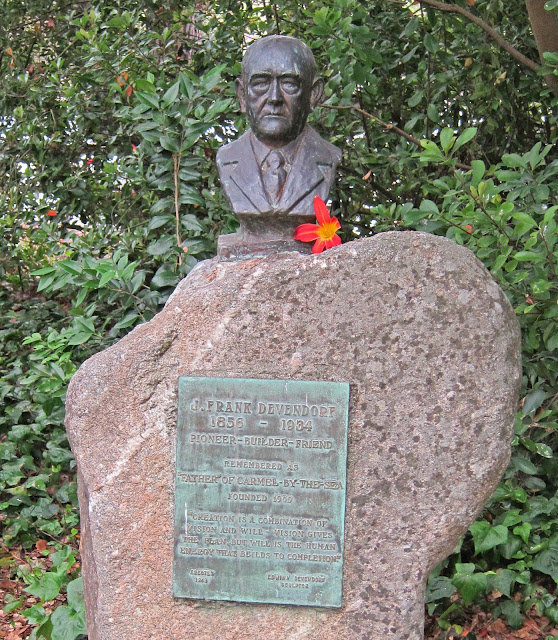 Then came Myrtle. Their fourth daughter, Jack Galante's grandmother, Lillian was born in 1890.  And finally Marion. Jack stated, that by the time his grandmother Lillian was born, the Devendorf family was quite prosperous.  By 1897 the family purchased a large home with verandas and expansive lawns high in the hills above Alum Rock Park.

And then came Carmel...."A town with a temperament wholly its own." (3) 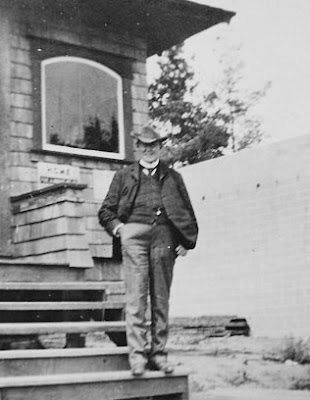 Jack Galante continued the story of his great-grandfather offering questions to provoke his audience's imagination.

"How can one describe Frank Devendorf - a visionary, an impractical dreamer, a gambler? Not a gambler in the ordinary sense of the word.  But he did gamble his family's present and future security when he got rid of all his other assets and occupations and devoted himself entirely to the development of Carmel.  Certainly he was a visionary.  My grandmother [Lillian] recalled a historic picnic on a point of land on the Seventeen Mile Drive.  It was summer, 1900. Her father looked over at the curving white sand of Carmel Beach and said: "Girls, I'm going to build a town there!" (1)

Though it is not completely clear how Frank Devendorf and Frank Powers met, more information was discovered during Jack's talk.  At the presentation Erin Gafil, great-great granddaughter of Frank and Jane Powers remarked that there is some documentation that the two of them, Devendorf and Powers, may have been neighbors at one point.  We will just have to wait for Erin's talk, Part 2 of the Carmel Residents Associations Centennial Series, March 17th, to see what she may have uncovered.

What Jack does go on to tell us is that Devendorf and Powers must have known each other by November 1900, because that was the month that Frank Powers purchased two of Frank Devendorf's Carmel lots. Why would Frank Powers purchase lots in a relatively unknown village on the central coast?

To get the answer, we need to rewind one year to 1899 - when according to Kirk Gafill, (great-great-grandson of Frank Powers who spoke at the Centennial Launch January 8, 2016) Frank Powers had been given a piece of land in Carmel in 1899, in lieu of cash for a legal bill. 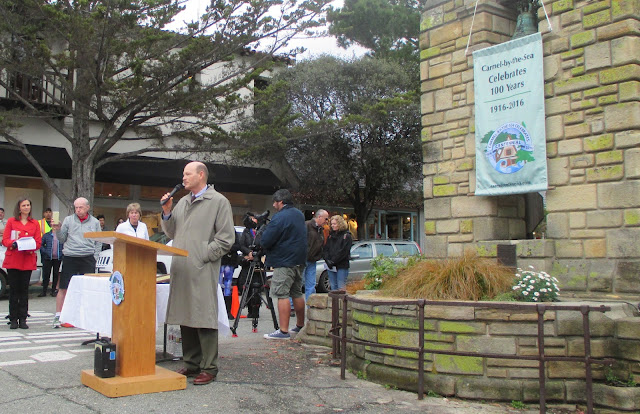 A short time later that same year, Frank Powers traveled to Carmel to check out his new property.  Kirk Gafill described the adventure at the Centennial Launch as follows: Frank "took the train down to Monterey, and the stage coach over what was then Monterey Hill... 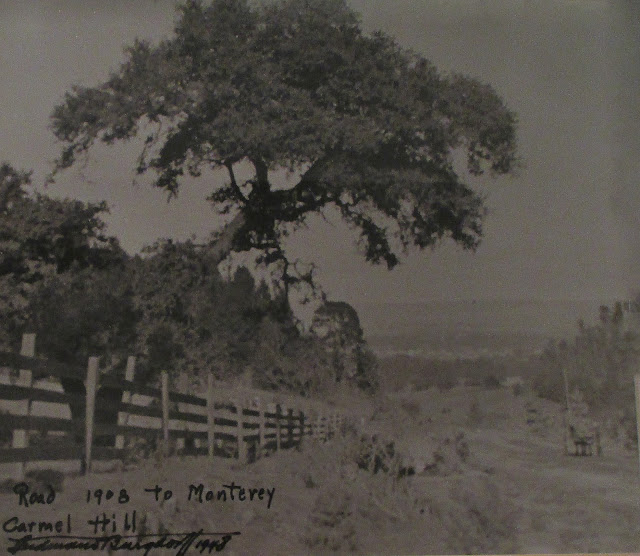 and camped out by what was then the ruins of Carmel Mission.  He woke up in the morning with the fog, walked around the ruins, 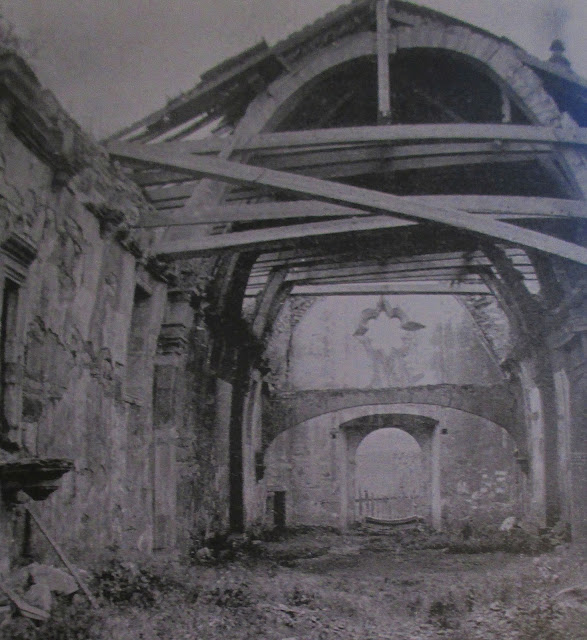 wandered over through the pine trees down to the beach and saw the dunes and realized it was a very special place and in fact there was some value to the legal bill he had just collected on." (2)

So, it appears that when Frank Powers purchased two of Frank Devendorf's Carmel lots in 1900, he had already decided that there was something to this land in Carmel. And in fact that might be why Powers purchased another 702 Carmel lots from Dr. Walton Saunders the same year. Two years later, in 1902, Powers had amassed about 80% of the lots of Carmel.

At the same time, by 1902 Frank Devendorf had sold the family house in Alum Rock Park and put all his assets into the development of Carmel. 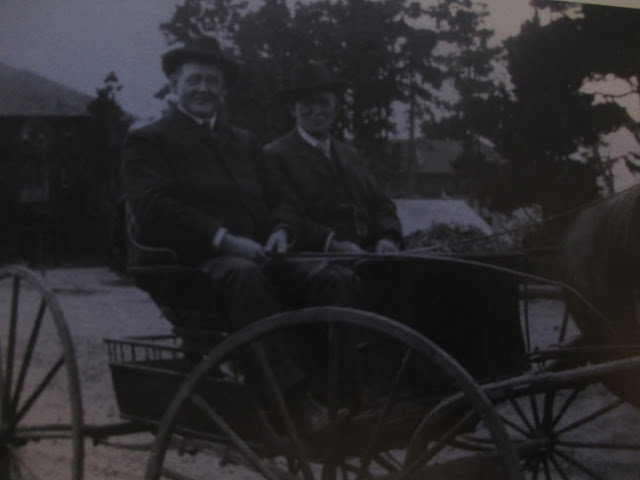 On November 28, 1902, Frank Devendorf and Frank Powers formed the Carmel Development Company and held their first Board Meeting.

Jack Galante went on to explain the two men's agreement as follows,  "Devendorf proposed: to take charge of the property "in the same manner as I have had charge for Frank Powers, giving my entire time and attention toward the development of this property," for 2 years for 25% of all sales of land made during this period." (1)

Frank Devendorf was away from his wife and daughters much of the time during the early years of Carmel's development.  After selling the house in Alum Rock, Frank moved Lillie and the girls into a rented house in Oakland. The post card below is postmarked from Carmel April 1909. Struggling at times with the residual effects of tuberculosis,  Frank wrote to Lillie, "I am better today and am trying to be careful." 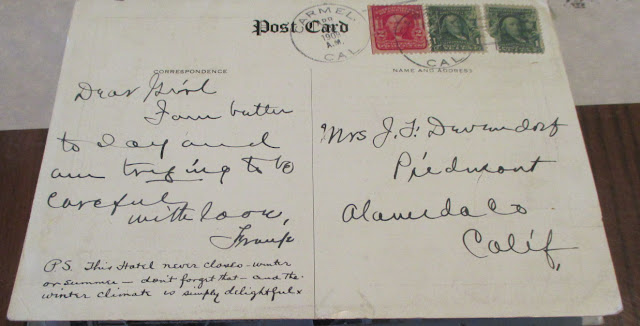 Frank Devendorf had a love for trees and the beautiful environment of the Monterey Peninsula. (He may had picked this up from his step father Captain Joseph Aram who established the very first nursery in Santa Clara County before his death in 1898.) Frank is responsible for the row of pine trees down the middle of Ocean Avenue which can be seen in their infancy in the flyer put out by Carmel Development Company c. 1909 shown below. 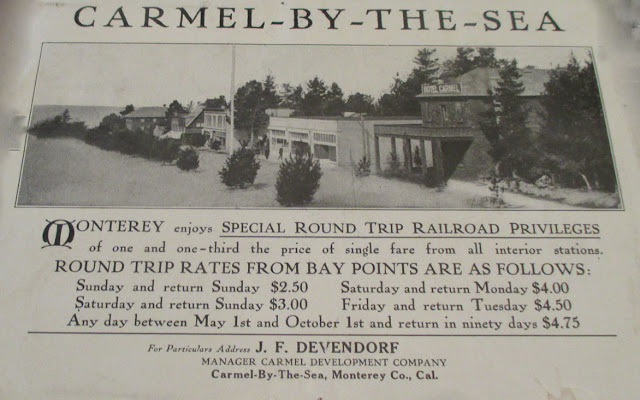 Frank Devendorf envisioned Carmel as being a town for families, and that they would live "in full harmony with the keynote given by nature."

In the first flyer put out by Carmel Development Company shown below, the character of Carmel residents is described as "college professors, artists, writers of all kinds, students of music and the arts in their various phases, naturally congregate here.  The surroundings are kept to invite them. More than a hundred of our residents are supported by the product of brush or pen or through music or lectures." 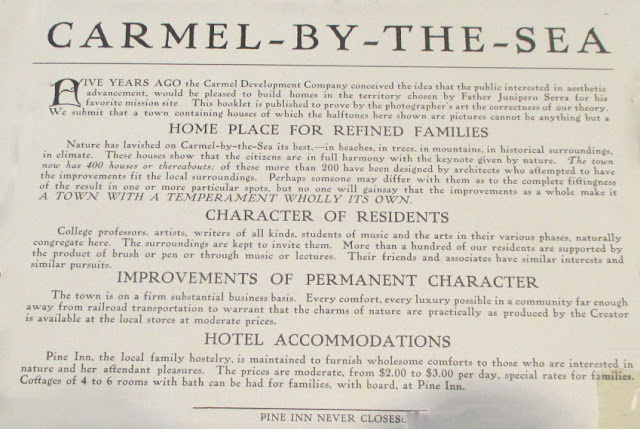 During the late teen years of the 1900's, after Carmel had been established, Frank Devendorf focused his attention on the development of the Carmel Highlands.  By then his daughters were grown and Lillie was free to come and live with Frank in Carmel. They were finally able to enjoy an extended time together in Carmel.  For their next 15 or so years time was spent between development of properties in the Highlands, picnics and traveling.

In the fall of 1934, Frank went out during a storm to find water for the Highlands property.  Though he was encouraged not to go, Frank went because he knew that the residents of the Highlands were depending upon him to secure water for the development. From this journey during the storm, Frank became ill and never recovered.  He passed away November 2, 1934. 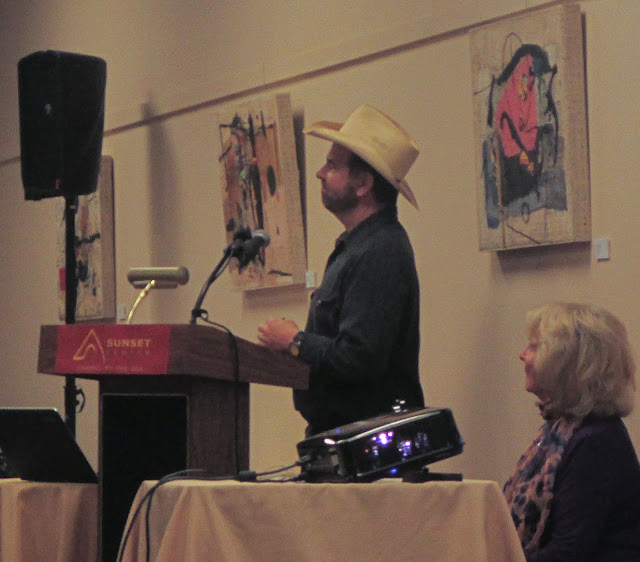 A few minutes after 6pm, Jack finished his fascinating presentation on his great-grandfather Frank Devendorf, thanked us for the opportunity to speak to us and to honor his family.

Then invited us to a celebratory toast from one of Galante Vineyard or Dawn's Dream Winery vintages.  Jack finally left us with this little bit of wisdom, "Always drink upstream from the herd!" - Yup, makes sense. 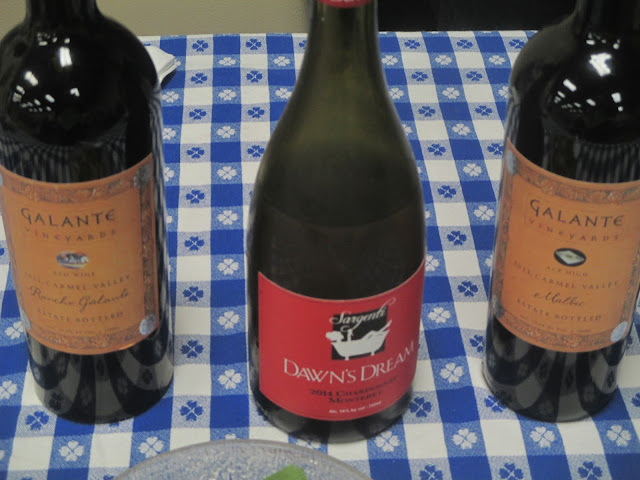 (2) Excerpt from talk by Kirk Gafill, great-great-grandson of Frank Powers given at the Centennial Launch, January 8, 2016 by the World War I Monument on Ocean and Junipero.

All pictures are by L. A. Momboisse unless listed below:

Picture of Carmel Mission in ruins, c. 1880 from the City of Monterey, Colton Hall Museum.

Picture of Frank Devendorf and Frank Powers in a buggy - courtesy of Jack Galante and the Jane Galante Collection.