Continuation from Part 1.  Empress Elizabeth Petrovena requested Rastrelli, the builder of Tsarskoye Selo (Summer Palace) to built the Winter Palace.  Rastrelli began the palace in 1754, completing it the year of Elizabeth's death in 1762, consequently Elizabeth never moved in.  Starting with Catherine the Great in 1762, all Russian rulers spent time living in the Winter Palace until 1917.

In 1764 Catherine the Great commissioned the Small Hermitage (for her growing art collection and her need for privacy) to be built next to the Winter Palace. The hermitage, from French word meaning "a hermit's abode," or "lonely place," was a place where Catherine would go to eat supper in seclusion without servants.  She also arranged "small hermitages," or parties for her closest "A List" friends there.

As Catherine's art collection continued to grow an addition to the Small Hermitage was built between 1771-1787 and was called the Old Hermitage.  Before this building was finished, Catherine developed an interest in theater and commissioned the Hermitage Theater to be built in 1783.  Finally all of these "hermitage's" were linked together with passageways to the Winter Palace.

Then came the fire in 1837 under Nicholas I's watch.  Though not all was lost there was still need for another building, and the New Hermitage was built between 1839-1842.

All of these buildings form the existing Hermitage on the Palace Embankment.  How does one see the Hermitage, the largest museum in Russia, with a collection that numbers around three million pieces, in three hours?  We don't, but our guide will take us to the majority of the most famous pieces.  Armed with our camera and the precious sticker necessary to allow us picture privileges, ready, set, and off we go. For a virtual visit visit this site.

We enter the ground floor of the Winter Palace a long 1/4 mile corridor designed by Rastrelli lined with massive columns supporting the vaults of the nave that extends the width of the palace ending in front of Justice by Tagliapietra in the Jordan Gallery, which leads to the openings of the Main Staircase. 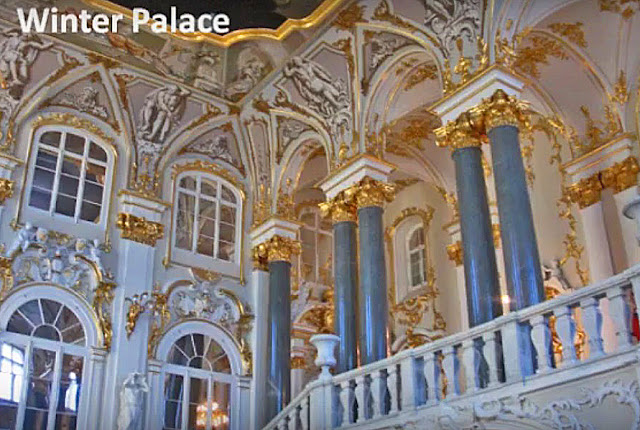 In the era of the Empresses of Russia (the 18th century), this is the same way guests would enter the palace. 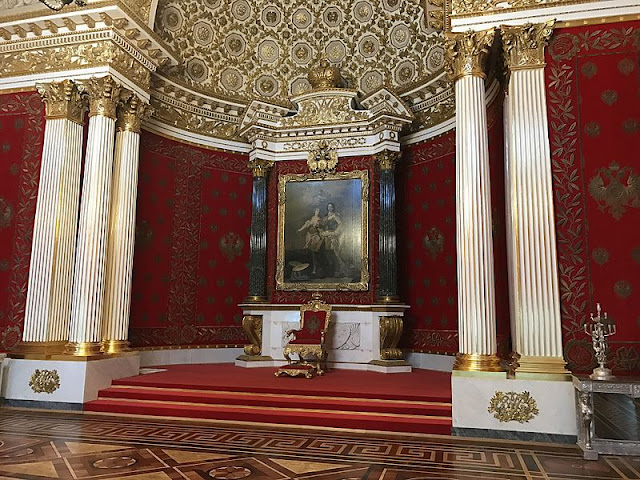 From the Jordan Gallery we climb the Main Staircase and walk through the Field Marshals' Hall past a large ornate carriage, into Peter the Great's Small Throne Room.  The walls are lined with red velvet embroidered with silver double-headed eagles and crowns, the monogram of Peter the Great.  Don't sit in the chair and pose for a picture.  Remember someone is watching your every move!!! 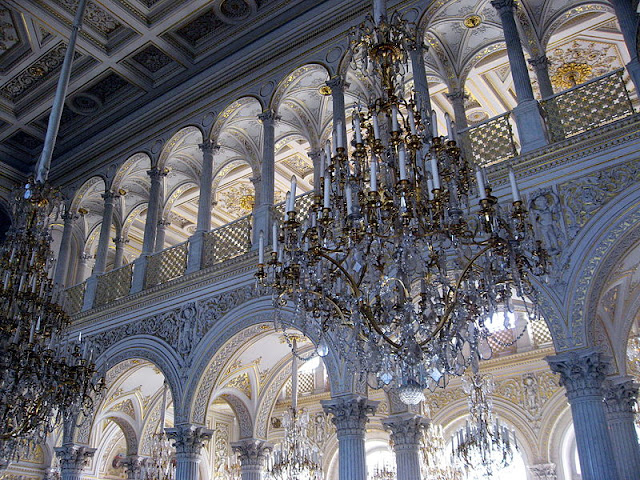 Enter the Small Hermitage and the Pavilion Hall which apparently is designed with three architectural elements intertwined, Classical Antiquity, Renaissance, and Asian, by Andrei Stakenschneider. 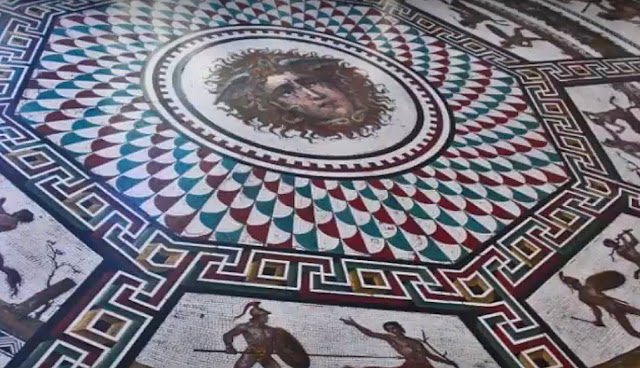 In the center of the room is a copy of a floor mosaic unearthed in a Roman bath (Classical Antiquity) featuring characters of ancient myths around the head of Medusa.

The walls are lined with Fountains of Tears (Asian), and the ceiling with twenty-eight crystal chandeliers.  The biggest attraction in this room is the Peacock Clock designed by English clock-maker James Cox.

Once a week the Peacock Clock is put into action. Watch the video above from the Hermitage Museum.

From the Council Staircase we enter the Room of Italian Art of the 13th to early 15th century.  Many of the pieces in this room were former sections of altarpieces. 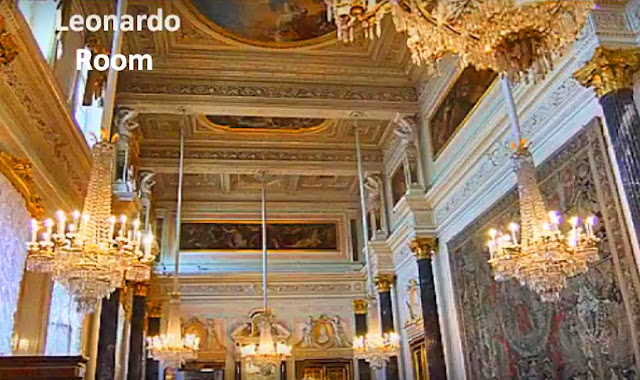 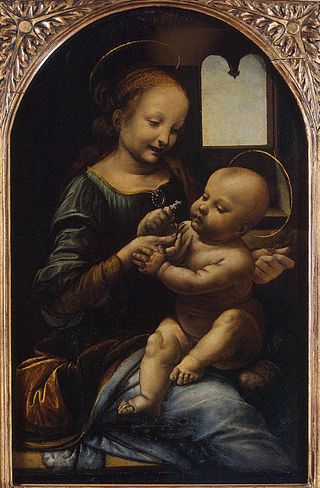 Madonna and Child with Flowers

Every room has so much detail.  This one is no exception, jasper columns with lapis inlays, crystal chandeliers, tortoises shell and copper inlay on the doors.  When I look down, I notice we are walking on a piece of art on the floor.

The Raphael Room holds the magnificent Conestabile Madonna also behind glass.  Our pictures do not show the beauty of this piece.  The Hermitage web site has clean clear files of some of their most famous pieces which I have added to the video when our pictures are unclear. 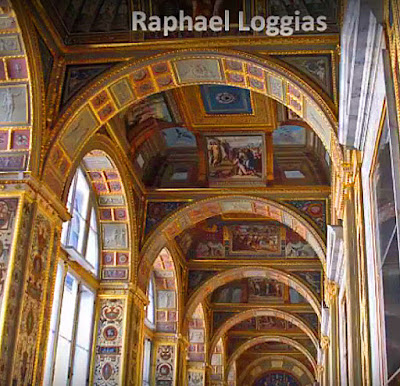 The Hall of Raphael Loggias is a reproduction of Raphael's Loggias in the Vatican. Catherine the Great contracted this project to Giacomo Quarenghi and a group of artists led by Christopher Unterberger to make copies of the frescoes based on Biblical stories and arrange them on the vaults of this hall.  Catherine obtained permission from Pope Clement XII to make the Raphael Loggias reproduction. 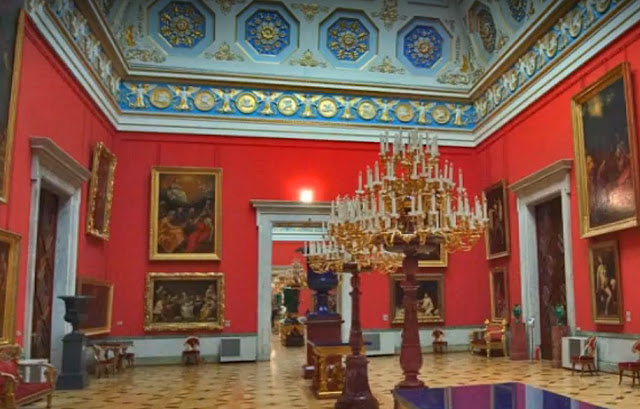 The Small Italian Skylight Hall is anything but small.  It is huge, with high vaulted ceilings and walls covered from top to bottom with canvases of different sizes.  For accent there are two tables and two vases made of midnight blue lapis. 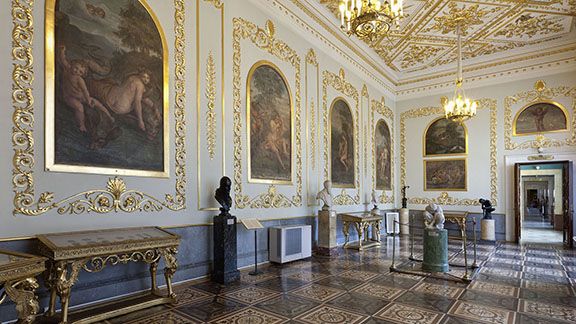 The Cabinet Room of Italian Art features one small piece that everyone wants to see, Crouching Boy by Michelangelo.  This piece is the Hermitages Little Mermaid.  It was impossible to get a picture of the Crouching Boy without twenty of his closest friends.

The Room of Netherlandish Art of the late 16th and early 17th century featuring the art of the Dutch and Flemish Schools.  Favorites were Biblical works of art by Dutch painter Hendrick. 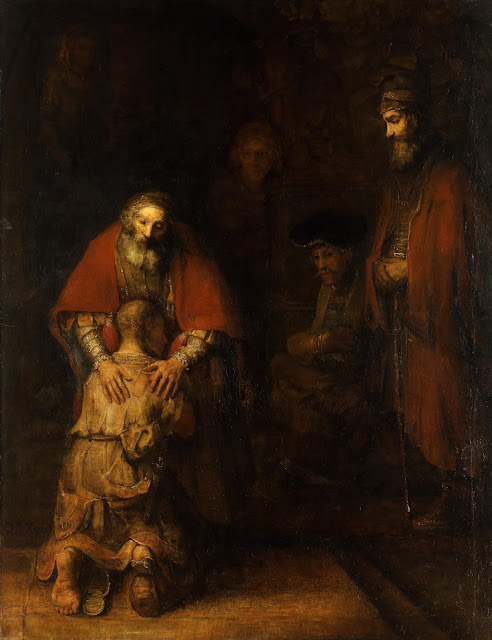 Return of the Prodigal Son

The Rembrandt Room houses 23 works of art by 17th century Dutch artist Rembrandt Harmensz van Rijn and my favorite piece at the Hermitage, The Return of the Prodigal Son.  Many times I have imagined myself kneeling before Our Lord, His hands on my shoulders comforting me with absolution.  Honorable mention to Descent from the Cross.

Running out of time, our guide skipped a few rooms - one the Grand Church which I would have like to have seen, but this is no place to leave the guide.  Next was the St. George Hall, also called the Large Throne Room.  The parquet floor is made from sixteen different valuable kinds of wood. Over the "Large Throne" is a marble bas-relief depicting St. George Slaying the Dragon.  The purpose of this hall was to serve for official ceremonies and receptions.

From the Throne Room to the War Room, a gallery devoted to the War of 1812 created by Carlo Rossi in 1826 in commemoration of Russian victories in the Napoleonic Wars.  On these walls are 332 portraits of generals who were heroes of the Patriotic War of 1812 and Russian Army's foreign campaigns of 1813-1814.

The Armorial Hall in the Winter Palace was used for official ceremonies.  The shields with coats of arms and emblems of all the provinces of Russia are arranged on the chandeliers.

A fast run through the Renoir, Monet, Rodin, Gauguin, and Matisse Room, will get us back to the bus on time.  So much to see but not enough time.  The following is a great video made in English of the State Hermitage Museum.

Back on our bus our driver made a pass around the Winter Palace/Hermitage and the Palace Square, the sight of Bloody Sunday, a massacre on January 22, 1905.

On that day, striking unarmed workers bringing a petition to give to Nicholas II marched toward the Winter Palace.  Led by Father Gapon they carried religious icons and sang patriotic songs and hymns.  The army gave warning shots in the air and then fired directly into the crowd.  Though the Tsar was not in residence, but residing at Tsarskoye Selo, he received the blame for the massacre.  The number killed is uncertain but palace officials listed 96 dead.  Anti-government leaders claimed more than 4,000 dead from both shots and being trampled during the panic.

We are in port in St. Petersburg tonight.  Many of those on our cruise went back to St. Petersburg for the evening to take in a ballet.  We decided to forgo another pass through Passport Control and stay on board for peace and quite and enjoy the White Night.

Saint Petersburg is located at such a high latitude that the sun does not go under the horizon deep enough for the sky to get totally dark for about six weeks a year, June 1 - July 14 (give or take).  The sky really does look white after the sun goes down until the sun rises.  Our unusually clear sky allowed for a perfect White Night.

Tomorrow we are back in St. Petersburg to tour the cathedrals.
****

For an interactive map and guided walking tour covering many of our tours please be sure to download the GPSmyCity App from the iTunes store. The App covers an extensive library of articles and walking tours from over 470 cities worldwide, and now features articles from Adventures of a Home Town Tourist covering Carmel and Monterey (with more cities on the way).
_____
All photography or video by L A Momboisse and R M Momboisse unless listed below: