Skip to main content
Labels
Posted by Adventures of A Home Town Tourist May 13, 2018

Today the Norwegian Sun pulled into Freeport Copenhagen.  We said goodbye to the Øresund Bridge and the windmills, disembarked quickly and were transported by bus to the Crowne Plaza Copenhagen Towers Hotel an ultra modern, stark, and meticulously clean hotel across from the Øresund subway station.

We left our luggage and set off for our last day in Scandinavia and our last opportunity to see Copenhagen.  The plan was to cover the area we had not seen on our first day in port (about 5 miles of walking). 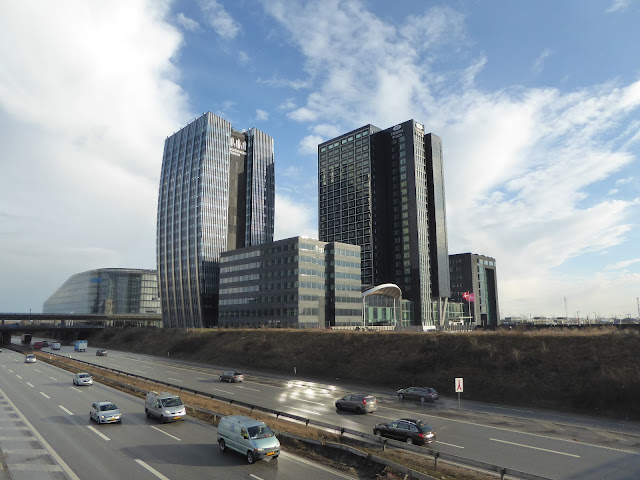 The Crowne Plaza is six metro stops from Kongens Nytorv the center of the old town.  Architecture passed while traveling  on the ultra modern, driver-less metro, were mega modern, hotels and apartments.

The Danes outside the old city, live in small square box apartments, perfectly fit with optimal use of space into large square cube buildings.

We exited at Kongens Nytrov metro station and it is a short walk across Kongens Square to Nyhavn.  The Netto-Baden Canal trip left from Nyhavn for a one hour trip through the old canals around the center of town.  This was a good way to reorient ourselves with the main sights.  Once we left the canal boat we were on our own to navigate with only a few landmarks as visual guides. 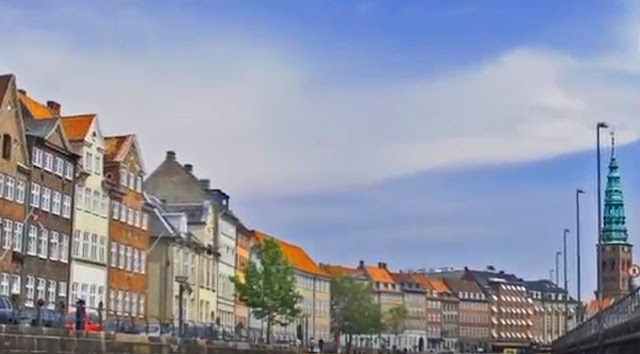 Our ride criss-crossed the Inderhaven (Inner Harbor) between Holmes Canal and Christianshavn Canal passing Christiansborg Palace on one side and the canals outside of Christiania on the other. 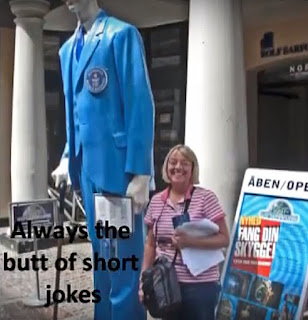 Once we exited the canal cruise we walked to the beginning of Strøget (the street that goes by many different names, none of which begin with an S) at Østergade then followed this passed, Guinness World Records Museum, a statue of the "Tallest Man in the World," to which I dutifully poised since I am apparently "The Shortest Woman in the World."

On to Amagertorv and the Stork Fountain then down Vimmelskaftet and Nygade (still on the so called Strøget) to Gammeltorv (Old Square) and the Caritas (Charity) Fountain.  Caritas represents the goddess of generosity. 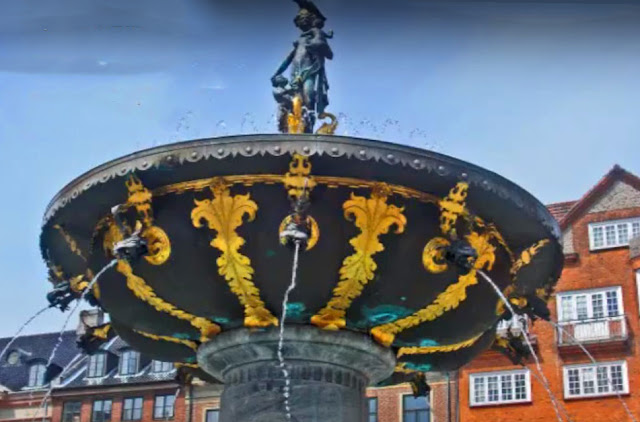 Water flows from her breasts and from the genitals of the young boy standing by her arm.  This was considered risque during the Victorian era so the fountain was plugged. 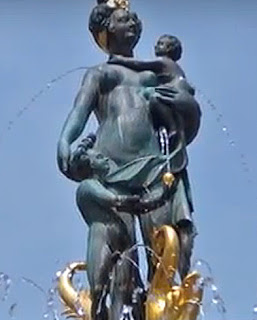 Time has allowed the fountain to flow freely again.

Next down Frederiksberggade (which is still Strøget) past the Lure Blowers sculpture, which honors early warrior Danes. 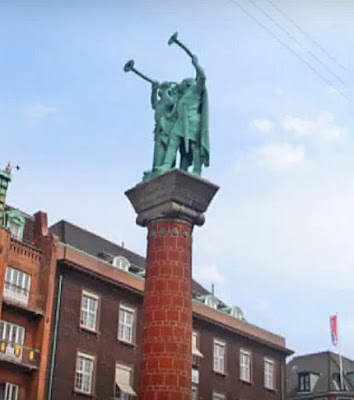 The Lure or Lur was used by the Vikings during pagan processions. It is said to sound like a trombone and apparently whenever a virgin walks past the Lure Blowers sculpture the young boys in the sculpture blow their horns. Nothing was heard from them the day we were there.

At this end of the Strøget  we arrive at Rådhuspladsen (Town Hall Square).  Just about every square in this old town was under some sort of construction.  Possibly, since this city has very few months of good weather and sunlight (at the same time), most of the construction, or general maintenance has to be done during the three short summer months.  It also happens to be the same time that the tourists come to town. We overlooked their dust, but it was hard to overlook the graffiti unfortunately generously interspersed on the beautiful old buildings, and cafe fronts. 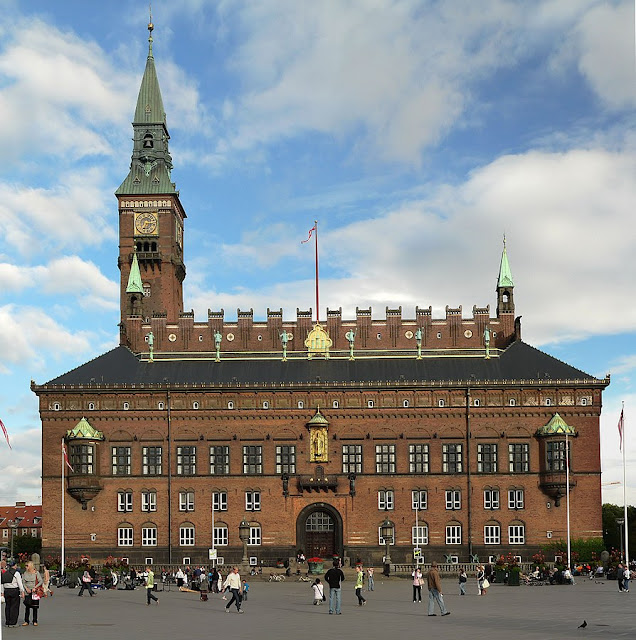 At the Rådhus, we found the gilded statue of Bishop Absalon above the entrance door.  Absalon was the 12th century founder of Copenhagen.  Unfortunately, the Rådhus was closed, as were all government offices on June 12, 2011 in celebration of WhitMonday which comes after WhitSunday or Pentecost.

National church attendance is estimated at 5% of its membership. This might not be the fault of the people.  In Denmark, Sweden and Finland, most churches we visited required a fee to enter and no longer functioned as a church, but as a museum (illustrating what religion used to look like) or concert hall.  So maybe that is why only 5% actually attend church services, there are few services to attend.  Or maybe it is the other way around.

Anyway, not able to get into the Rådhus, we spent time with Hans Christian Andersen and walking the enormous parameter of this building, past the Tivoli Gardens (an amusement park), the Palace Hotel, and Glyptotek (a huge museum of art) before heading across the bridge to Christiansborg Slot (a palace).

Christiansborg Slot is not only the third of the three Slots (Rosenborg and Amalienborg) but is it also the seat of the Danish Parliament and also closed for the national holiday.

Spectacular grounds and we pretty much had the place to ourselves except for two royal police on horseback who had been following us since the Strøget. 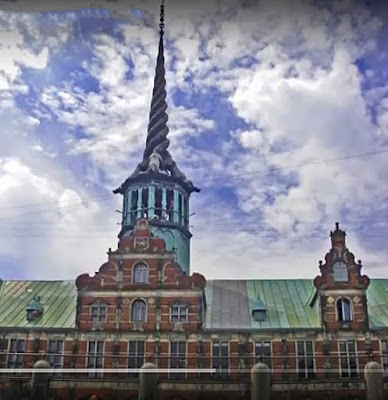 After walking through the interior grounds and under the tall (triple crowned tower), we came out on the other side of Christiansborg, and walked right into the Gothic style Børsen (stock exchange) with its unusual Dragon Spire designed in the shape of four dragon tails entwined together.  This was Copenhagen's stock exchange, but today it houses he Chamber of Commerce. 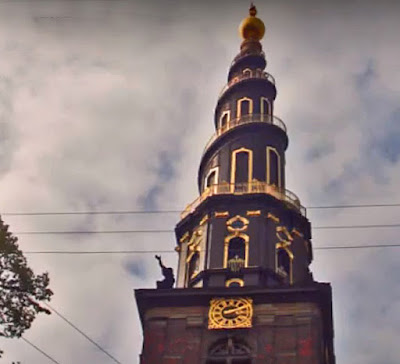 Cross the Torvegade Bridge, pass the Christianhavn metro stop left at Dronningensgade and walk to the foot of the greatest climb of our trip, the tower of Vor Frelsers Kirke (Our Savior's Church) at 29 Sankt Anne Gade.  This was our final climb of our trip and our most anticipated.

The church was built in the 1680's of red brick on a solid granite foundation, it appeared stable enough to risk climbing on stairs the framed the outside of the tower.

This climb is not an easy one.  Starting on the inside there are 250 steps with the last 50 or so in the form of a ladder.  We climb past the 48 bronze carillon bells.  This is the largest carillon system in Northern Europe; it has a musical range of four octaves, and chimes a different hymn every hour.

The last part of the climb before arriving at the first level, provides room for only one way traffic.  Patient guides directed traffic in various languages.  Voices only rose when the holding areas reached periodic limits where no one could actually go either way.  In that case someone had to give and back down the ladder or back up the spiral.  Somehow it worked.

The next part of the climb is on the outside of an ever climbing, ever narrowing spiral turning counterclockwise 150 steps to the top with the last 10 or so steps being wide enough for only one medium sized person.  No give or take here.  Absolutely the best climb on the trip and worth the heart palpitations. 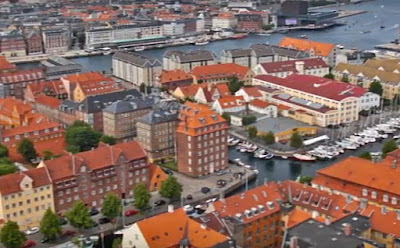 Limited only by how good your eye sight is, the view is fantastic.  Our next stop was Christiania,  When looking down at Christiania, the area is mostly covered by trees, eliminating pictures even before getting there. 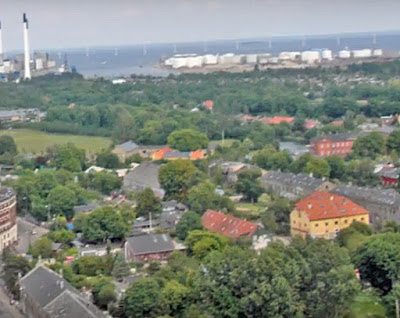 The only way down is the way we came up.  So we reverse the 150 steps on the outside, then ladder, and 250 stairs on the inside, one foot in front of the other.

The video below covers our tour to this point.

From the courtyard of Our Savior's Church where the residents of Christiania hold a perpetual flee market turn left down Princessegade, where the street becomes progressively more graffiti and garbage filled, to reach Copenhagen's second largest tourist attraction and number one "social experiment."

Freetown Christiania can be entered or exited by two places off Princessegade.  One appears to be as if entering a castle the other under a wooden sign.

Christiania traces its beginnings back to the late 60's with it's official beginning listed as 1971.  Established on the abandoned sight of the Bådsmandsstræde military barracks a number of squatters took over and established their own rules.  In 1972 the Ministry of Defense entered into a contract with the people of Christiania for water and electricity.  The residents pay taxes to the state.  No one owns the land, they just live there as one in commune. 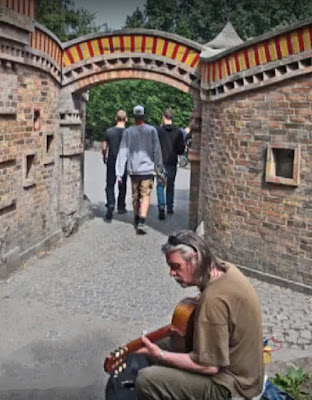 Nothing can be grown for food because the ground is poisoned from the military use.  Plenty seemed to be growing, but suppose it wasn't primarily for culinary use.  Children abound sitting or playing around grownups who sat in circles smoking very large joints.  623 people are registered as citizens, with 130 of them being children.  Numerous dogs run free, and owners appear oblivious to their doggie doo doo. 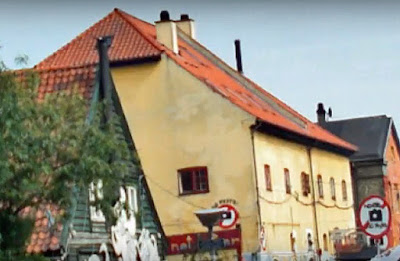 Stalls line "Pusher Street" where marijuana and hash cakes were openly sold with various pricing depending upon where product was from, or how it was grown.  No pictures are allowed in these areas of Christiania, for obvious reasons. 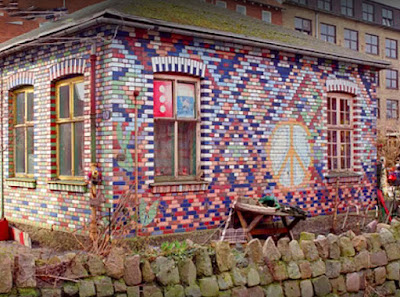 Most buildings are covered with murals or haphazard graffiti that may, or may not, be considered art.  Though there are bins for recycling, there is garbage left everywhere.  Could be messy tourists and the residents have to clean up each night, I don't know. 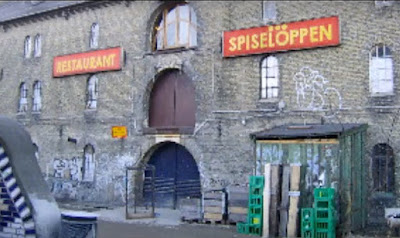 There are restaurants here, and though we had planned on eating dinner in Christiania, we were turned off by the garbage and the smell.  Not the smell of marijuana, but the smell of garbage, and dog waste.  I'm sure one would get used to it,  but it wasn't conducive to eating a nice meal alfresco.

The following video is of our experience in Christiania.

If there had been no time constraints in Copenhagen tours of the inside of all three palaces, a climb of the Rådhus, quick walk through of the Glyptoteck and a personal tour of Christiania by a resident would have been lovely.

Tomorrow we leave and fly home.  Until next time, Happy Adventures!!!!


****
For an interactive map and guided walking tour covering many of our tours please be sure to download the GPSmyCity App from the iTunes store. The App covers an extensive library of articles and walking tours from over 470 cities worldwide, and now features articles from Adventures of a Home Town Tourist covering Carmel and Monterey (with more cities on the way).
___

All photography or video by L A Momboisse and R M Momboisse unless listed below: