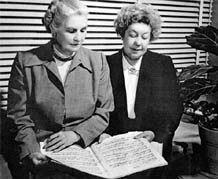 Dene Denny and Hazel Watrous, musical producers and owners of the Dene-Watrous Gallery, believed that Carmel-by-the-Sea should be the epicenter of world-class music, art and cultural expression.  In 1935 they set out to make their dream a reality by founding the Carmel Bach Festival.

The festival began as a four-day concert series at the Sunset School Auditorium and the Carmel Mission.  This year, in its 78th Season, the Carmel Bach Festival will feature 38 concerts, 154 musicians and 34 free events!

On May 2nd the Carmel Bach Festival, following in the creative footsteps of their founders Denny and Watrous, held their second Cottages, Gardens and Cantatas, featuring five homes and gardens in Carmel-by-the-Sea and the Carmel Point area. Each home, venue, entertained us with live music! The first stop, The Hess Home. 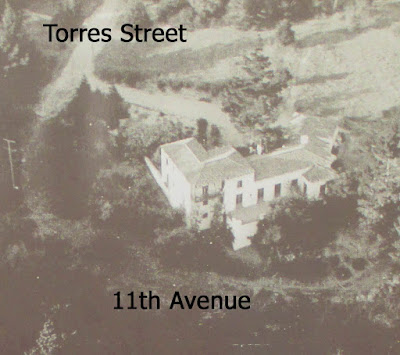 A graduate of West Point in 1907, Col. Watson became a skilled pilot.  He led the first flight over the Sierra Nevada and instituted the aerial patrols of the National Forests during World War I.

After retiring in 1922, Col. Watson came to Carmel with his wife, Eleanor "Nell" Ewing, and their children and took up residence in the home on Torres and 11th.  In 1927 the family moved to Twenty-nine Palms and another military family occupied the house.

In 1948 the property was sold to Countess Claude deKinnoull.  The Countess was born Enid Hamilton-Fellows, only child of Ernest Gaddesden Fellows and Margaret Hamilton Wills a wealthy British family.  Margaret's father was Sir Frederick Wills, one of the founders of The Imperial Group, one of the world's largest tobacco companies.

Enid Hamilton-Fellows acquired her title Countess when she married George Hay the 14th Earl of Kinnoull (Scotland) in 1923.  The marriage lasted only four years and she never remarried.


While she was studying art in Spain, the Countess became a supporter of General Francisco Franco.  She traveled with General Franco, filming his press reports, as he led the Nationalists to victory over the Spanish Republic during the Spanish Civil War in 1939. 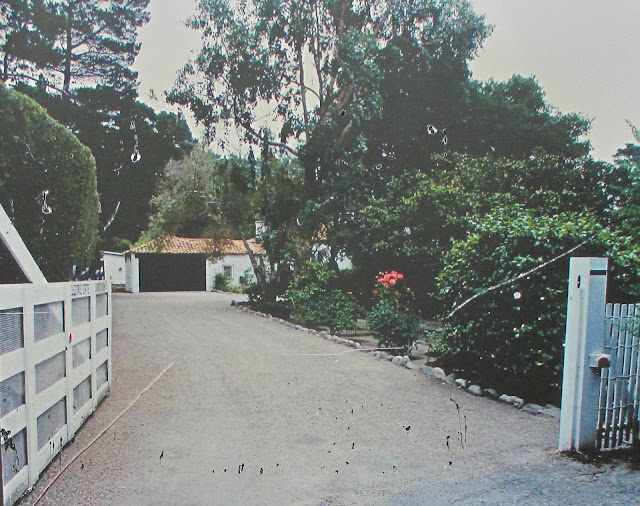 During World War II the Countess worked with the British and French secret service to expose Communist agents.  When Germany invaded France, she used her relationship with Franco, now the leader of Spain, to attain passage to the United States in 1940.

The Countess was drawn to the artist community of Carmel and made it her final home.  She lived in the Spanish style home at Torres and 11th from 1948 until her death in 1985. During her time in Carmel she served on the board of the Monterey County SPCA, was an active member of the Carmel Art Association, and fought against the commercialization of Carmel at Council meetings.

The Hess family purchased the property in 1994 and have continued to restore the house and gardens.  Keeping with the interesting backgrounds of the owners of this house, Ken Hess created Family Tree Maker which is now part of ancestry.com.

Our tour begins just outside the gate. 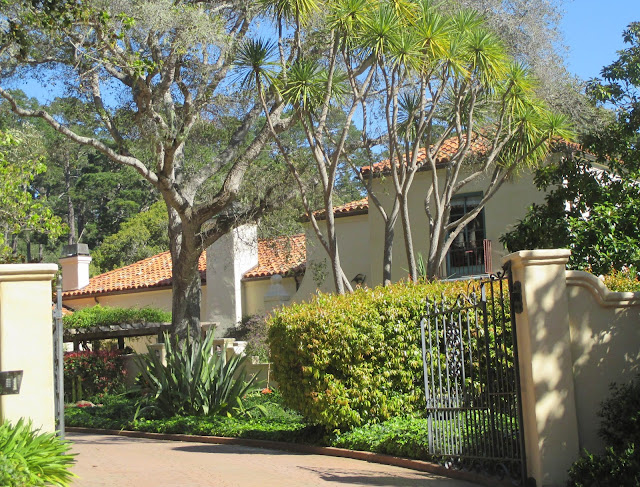 Inside the gate the garden is in full bloom. 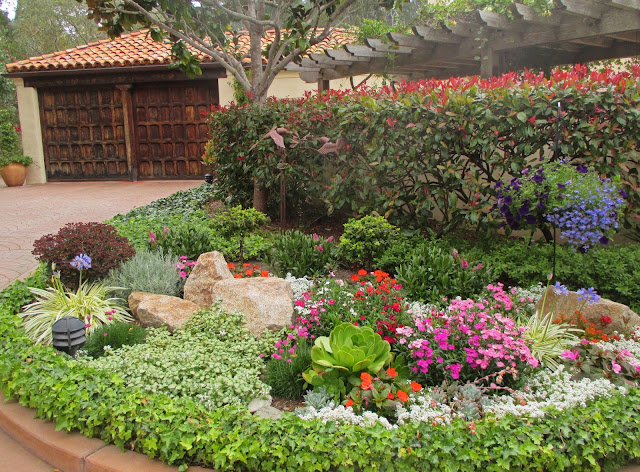 It is difficult to capture the grandeur, 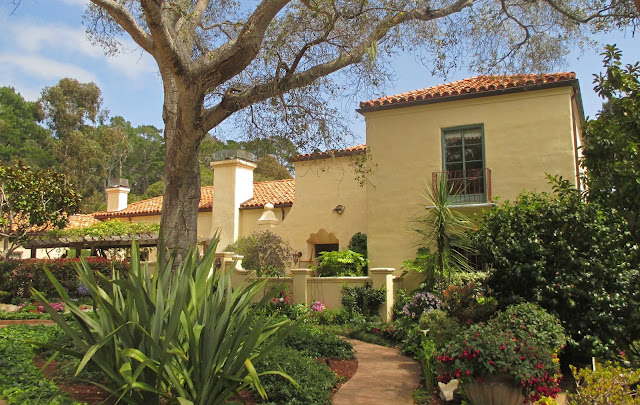 style, and beauty of this home with one picture. 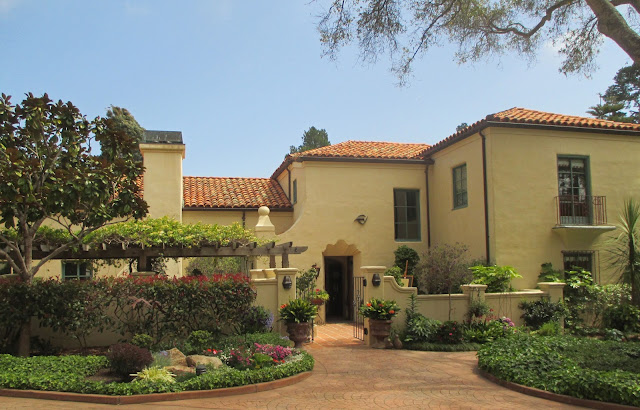 The courtyard features a tranquil fountain, 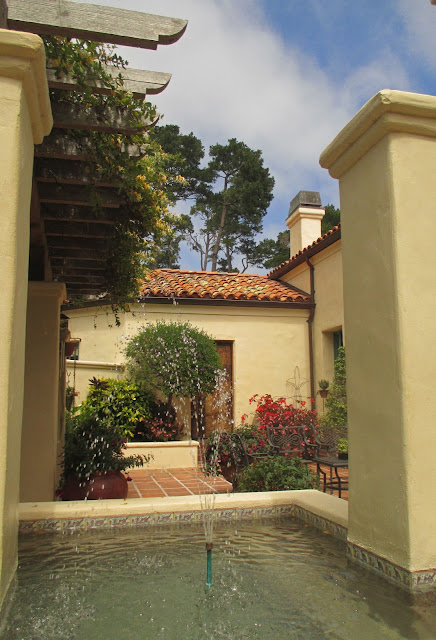 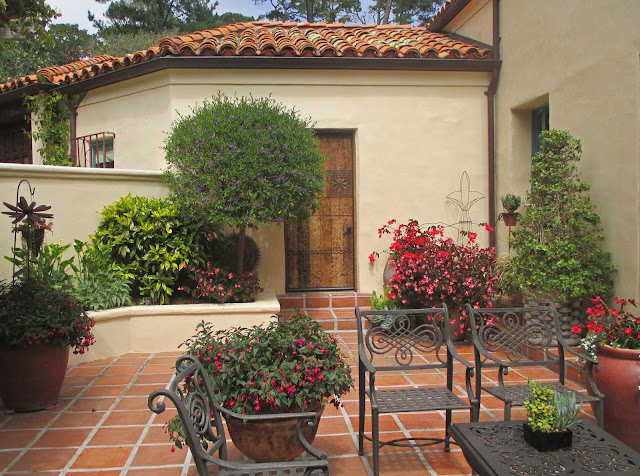 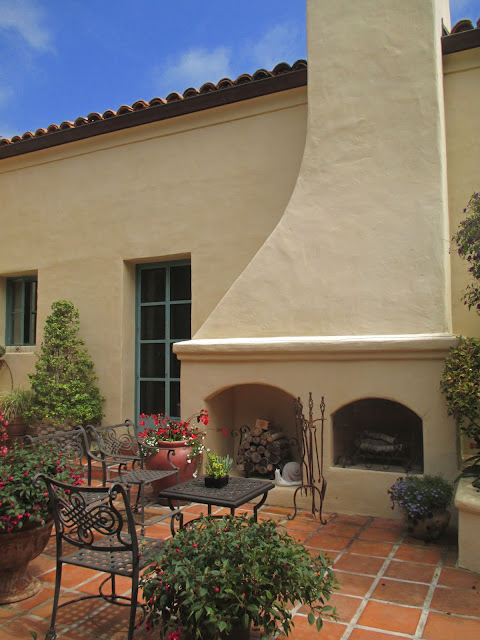 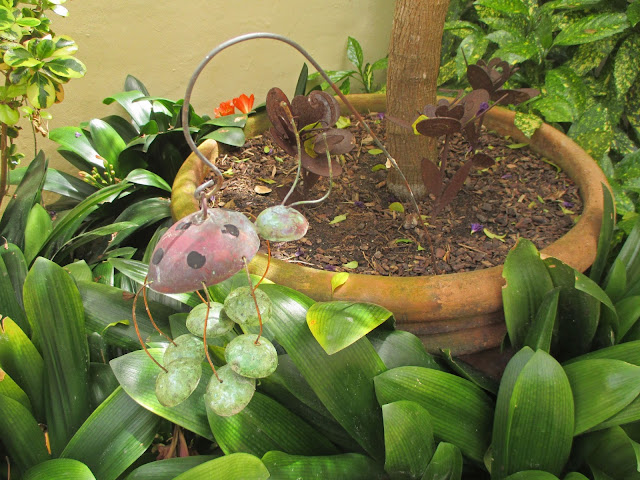 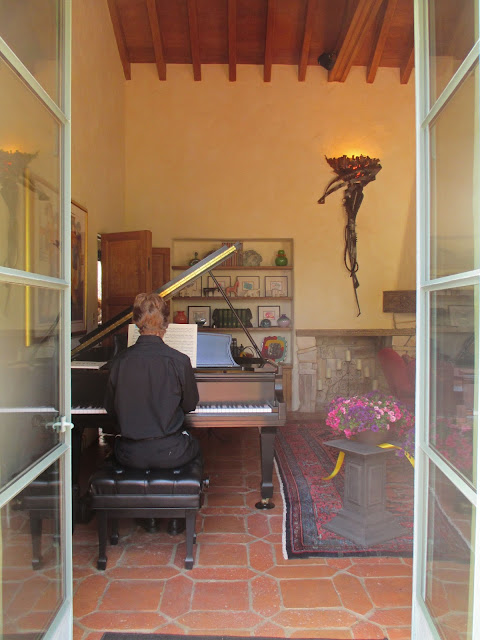 The dining table base is made out of 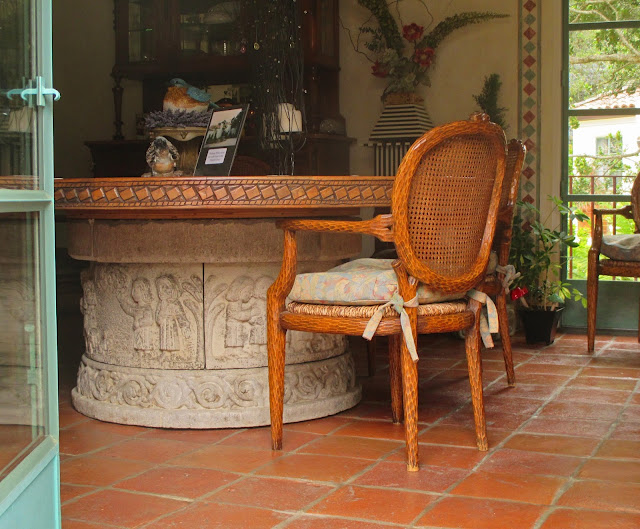 the wishing well formerly located in the front garden. 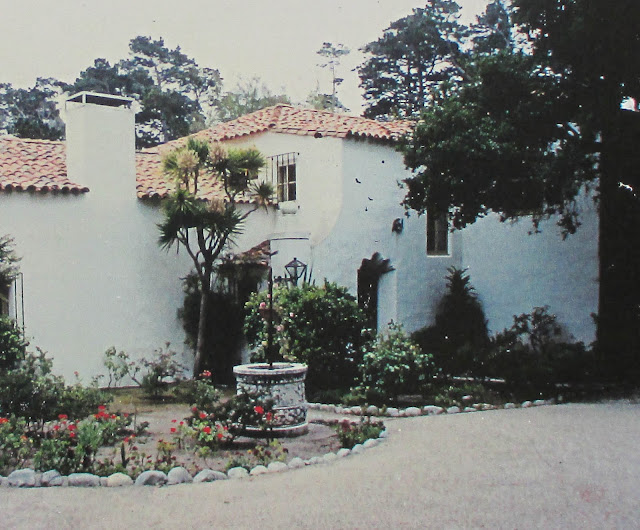 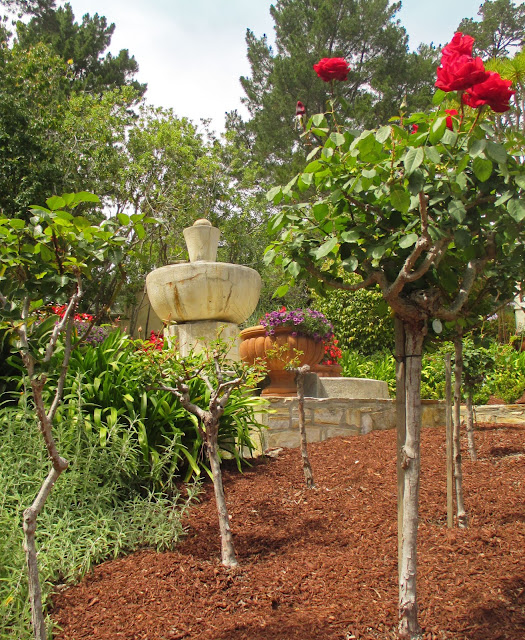 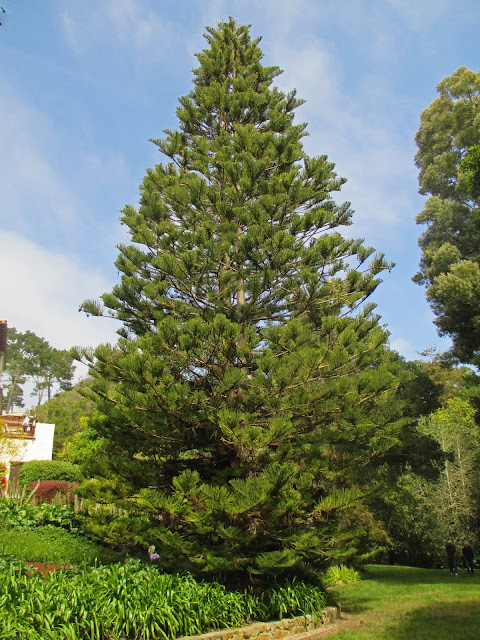 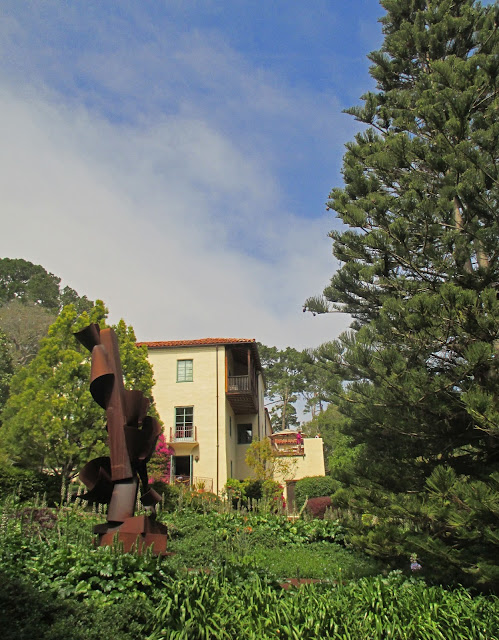 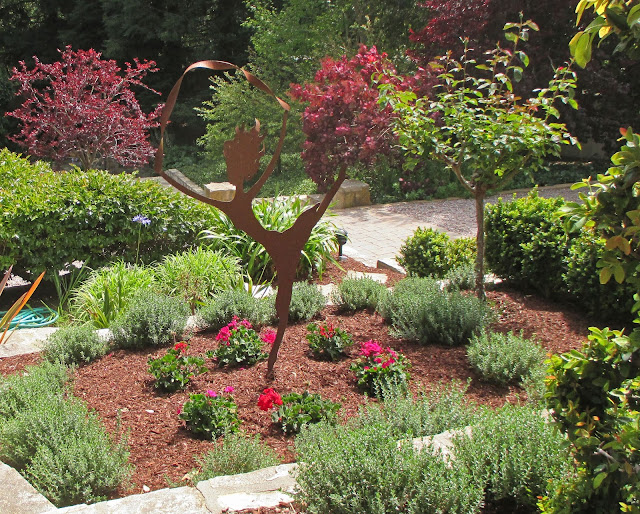 a serene pond with fountain, 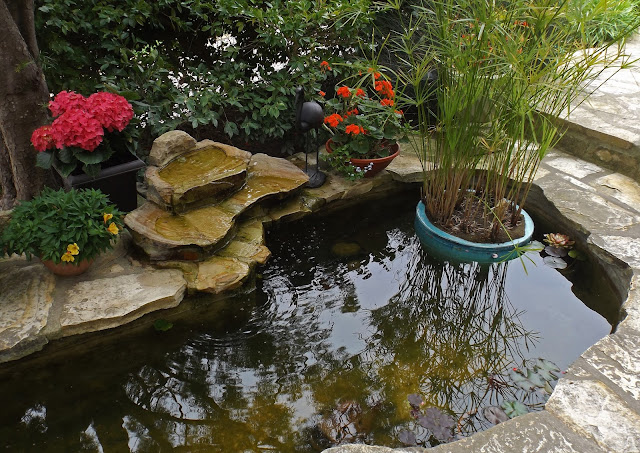 and a "tree of life" mosaic believed to have been made by the Countess herself. The mosaic was originally over the fireplace in the living room but was moved to just outside the back gate. 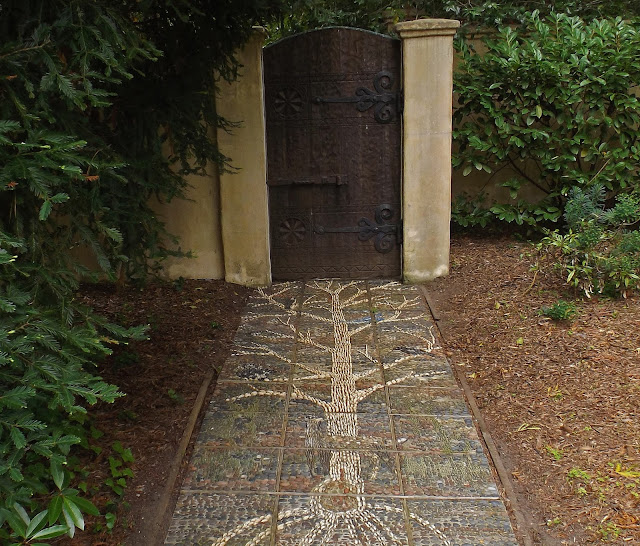 The next house on the tour, Carrickmacross, is five blocks south on Lincoln Avenue.

Carrickmacross
2 SW of 13th on Lincoln 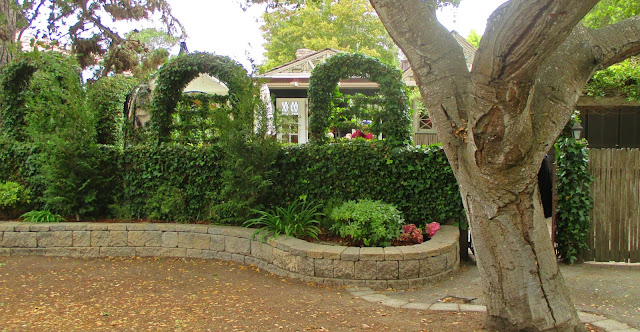 Carrickmacross cottage sits behind a hedge of perfectly manicured ivy arches. The name Carrickmacross (Irish: Carraig Mhachaire Rois, meaning "rock of the wooded plain") was the village in County Monaghan, Ireland where the current owners father was raised. 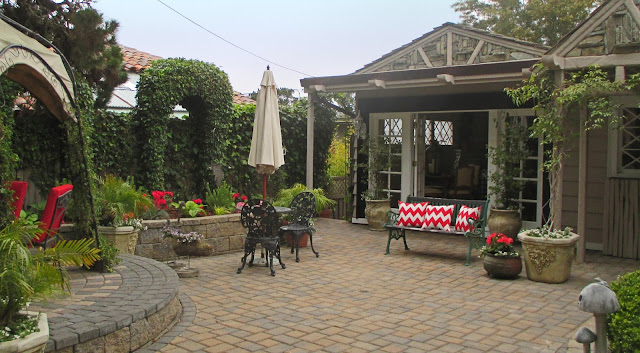 The patio stonework, done by Martin Guetierrez, extends the entertainment area seamlessly from indoor to out. 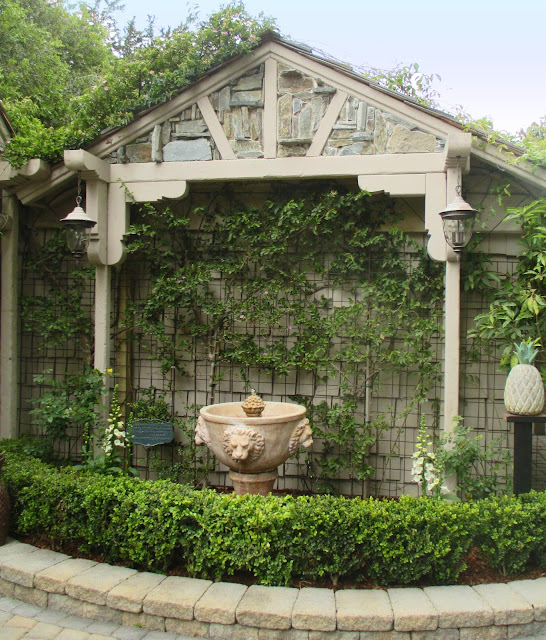 A rabbit mural painted by local artist Cary Crockett
is above the fireplace mantle. 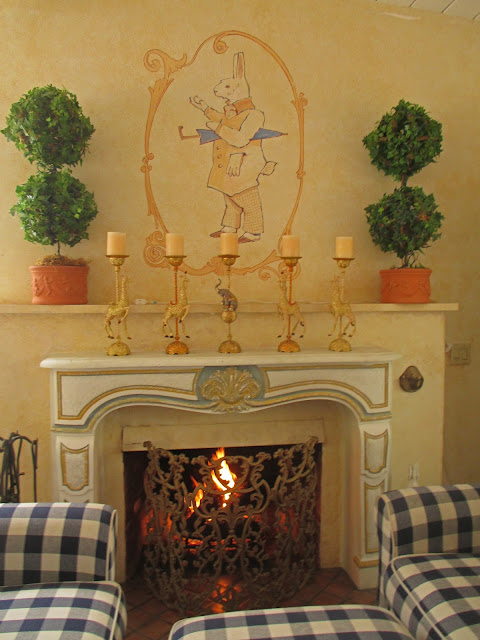 The Wurlitzer baby grand piano has been in the family for generations.  It was purchased from a convent in Southern California.  During the Bach House Tour, Cailyn Schmidt played Italian composer Giuseppe Scarlatti's Sonata E Major K380. 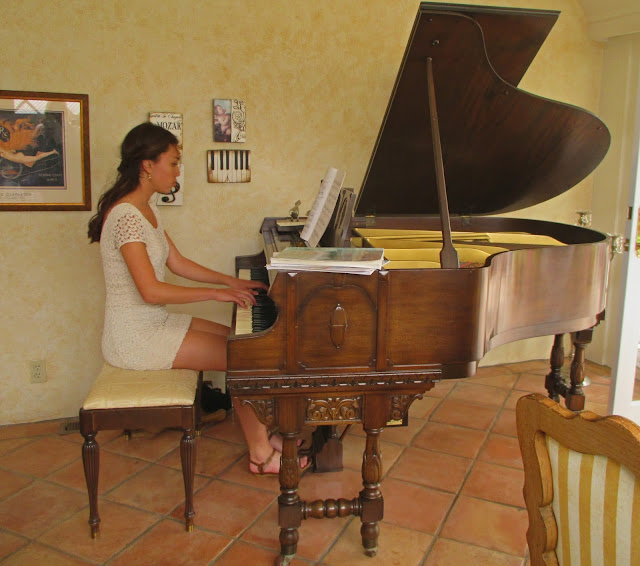 To view a map of the homes featured in this blog, please visit this link.

Posted by Adventures of A Home Town Tourist at 4:20:00 PM