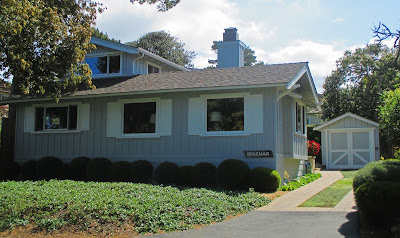 According to the current owners, Anna Osborne bought the lot on San Antonio in 1916 from the Carmel Development Company. The first house built on the property is said to have been built by M. J. Murphy around 1921. 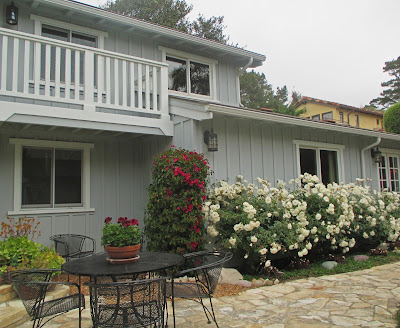 The earliest record I found on file at City Hall was for a building permit from February 1932.  The owner of record at the time was Winifred O. Brown a relative of the current owners.  Mrs. Brown hired Carmel resident Al Stoney to make renovations to her property. In 1937, she asked Mr. Stoney to add a 5 by 4 foot bathroom to her expanding board and batten cottage.  The estimated cost, $300.00. 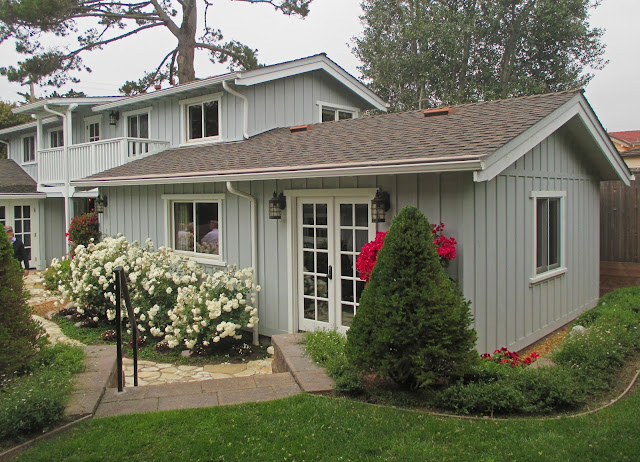 Over the years Braemar has undergone additions and subtractions - In the living and dining room, the original 90+ year old redwood shines! 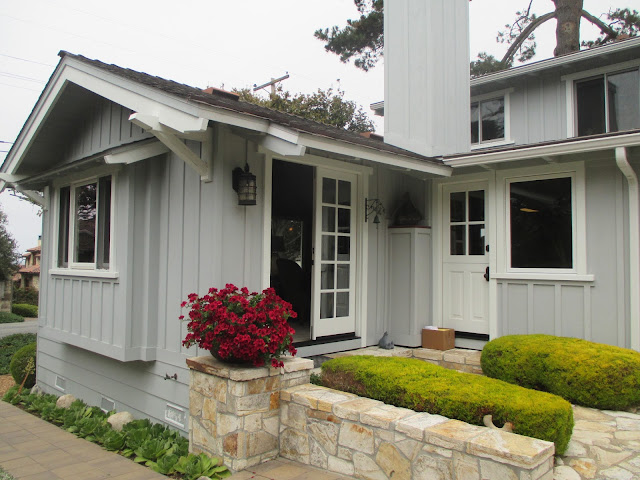 The original tub in the master bath has been re-purposed as charming garden art. 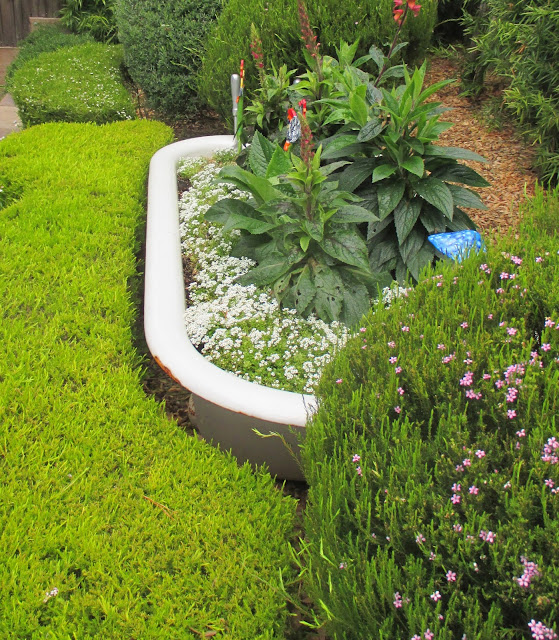 Under the shade of the over 100 year old Buckeye tree in the backyard is a bench commissioned for the owners' 50th wedding anniversary celebration by artist Albert Guibarra. Oski looks so peaceful. 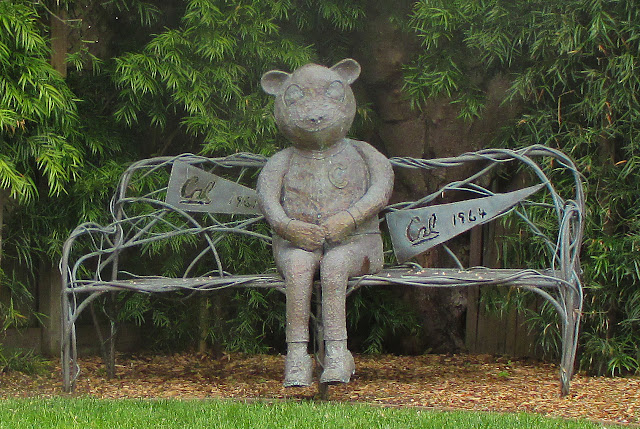 As a Palo Alto native I have two fight songs battling it out in my head -  "All Right  Now" (Stanford) and "Big C" (Cal).

The last two houses of the day are in the Carmel Point area. 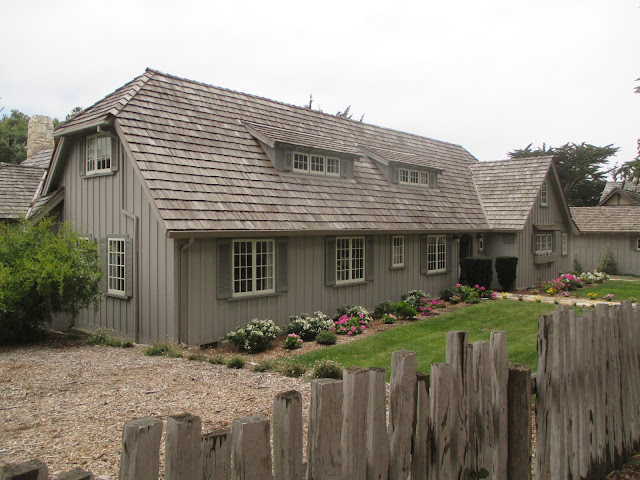 Henry F. Dickinson was born in St. Louis, Missouri in 1873. He obtained a law degree from Harvard and practiced law in Chicago until 1922.  At age 48 he decided to retire because he decided his law practice prevented him from fully enjoying life with his family. 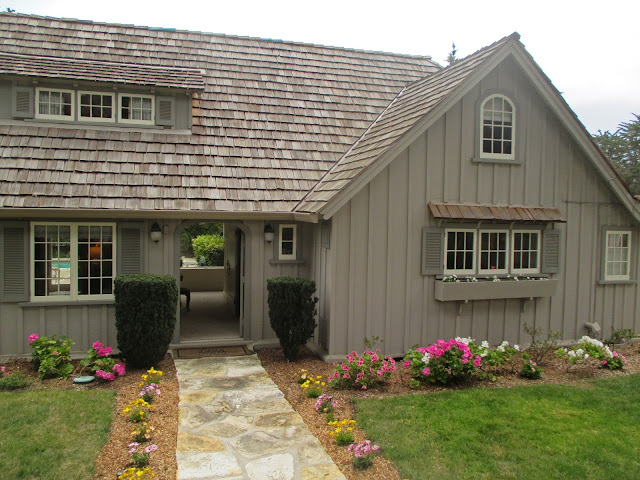 After a year living in Woodstock, New York, Mr. Dickinson brought his wife Edith and their family to Carmel, the community he felt would give them the best life.  In 1923, he purchased land in the undeveloped area of Carmel Point and hired M. J. Murphy to build his home. 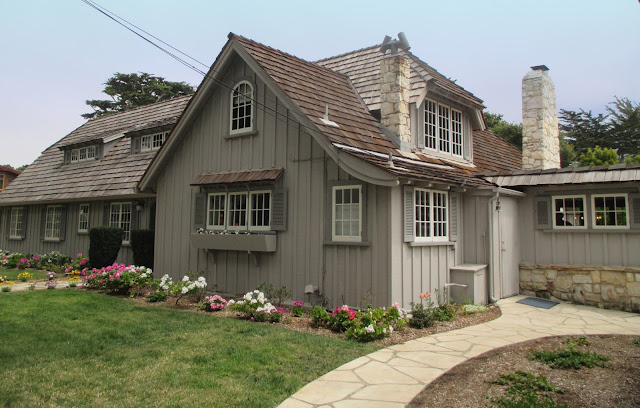 Henry and Edith Dickinson became an integral part of Carmel.  They helped organize the Carmel Music Society with Henry being the organizations first treasurer and Edith one of the first presidents.  Over the years they organized a 40 piece children's orchestra for Carmel. 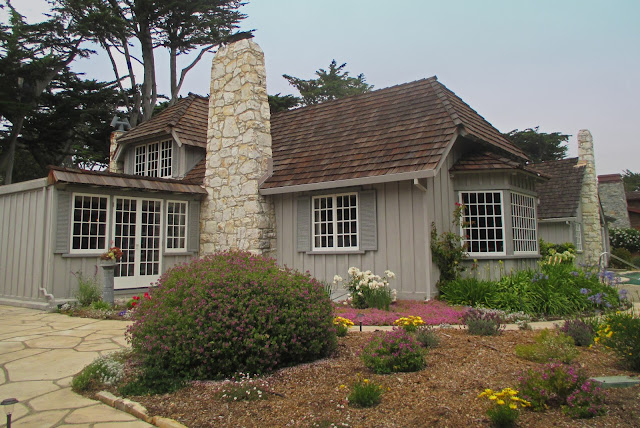 The current owners, the Love Family, ran Love Antiques and Interiors on Dolores Street in the 1970's.  The family has beautifully maintained the home and gardens, 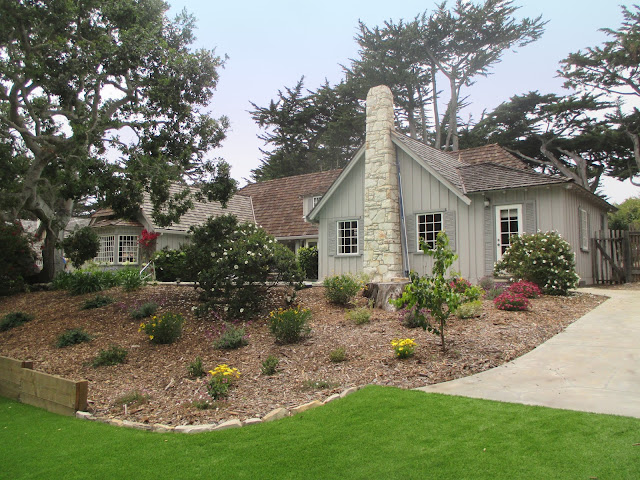 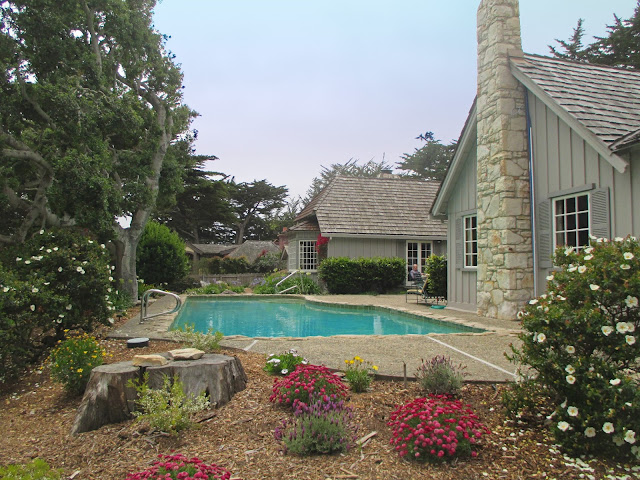 The final stop of the tour is the spectacular ultra modern home on the edge of the Carmel River Wetlands State Park. The 40 minute wait to get inside -  worth it. 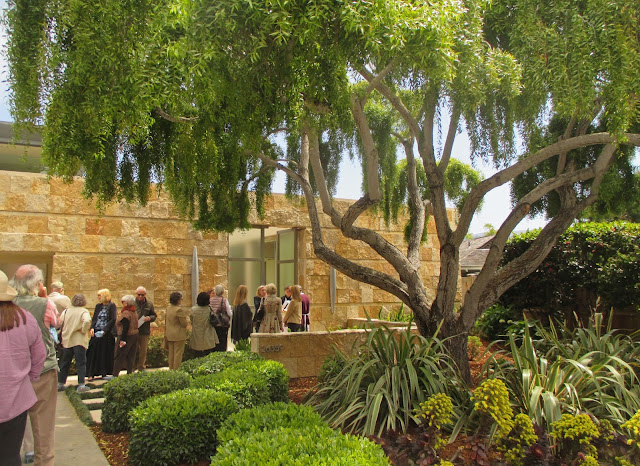 When the Cooperman's purchased this property 27 years ago, it was a simple ranch home.  In 2009 they hired local architect David Martin to do a complete remodel.  The one surviving feature from the old property is the majestic mayten tree in the front yard. 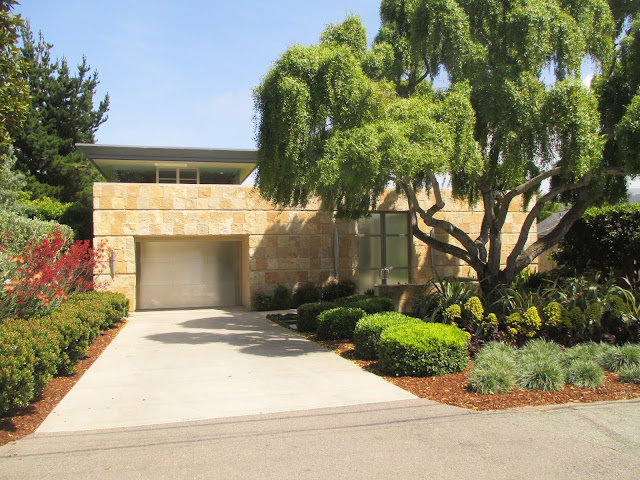 The glass and stone, steel-framed home has many architectural features. 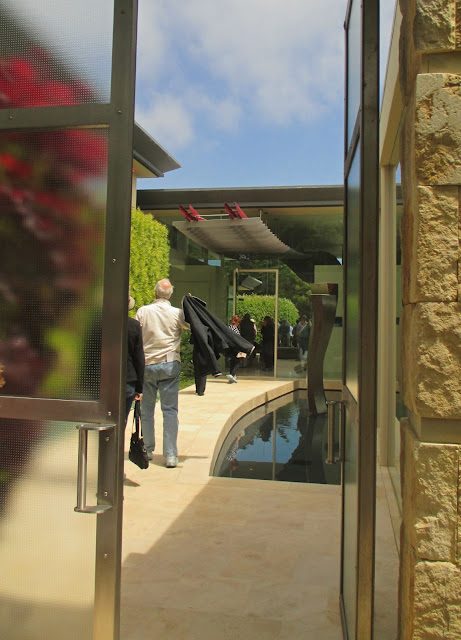 Immediately inside the glass entry is an atrium with reflecting pool. 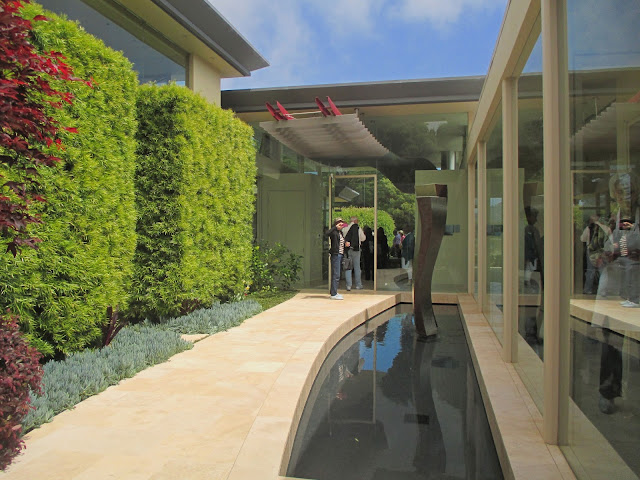 The stainless steel and bronze sculpture is by artist Archie Held. 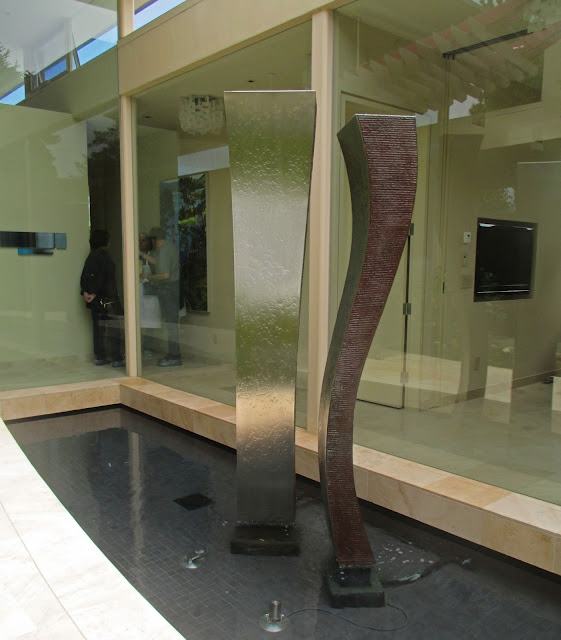 A steel "wave" made with individual blades
begins in the atrium, 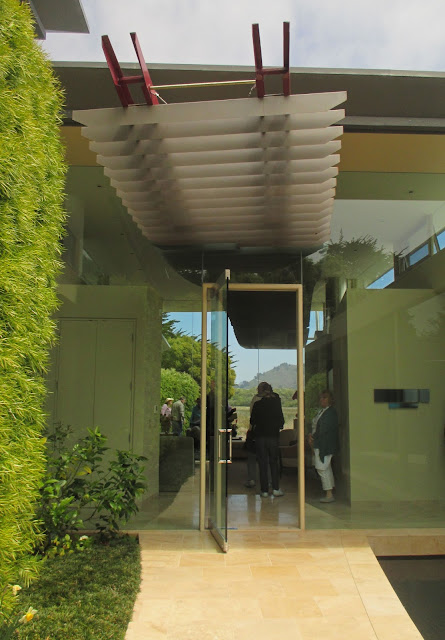 flows through the living room to the back patio. 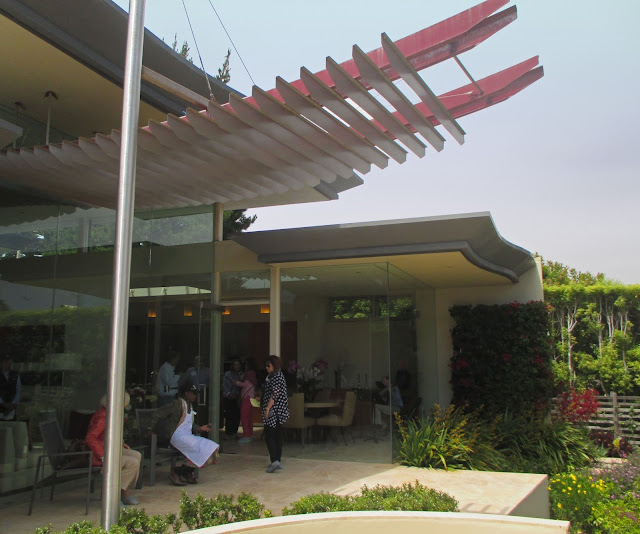 Floor to ceiling glass allow for an unfettered view of the wetlands and highlands. 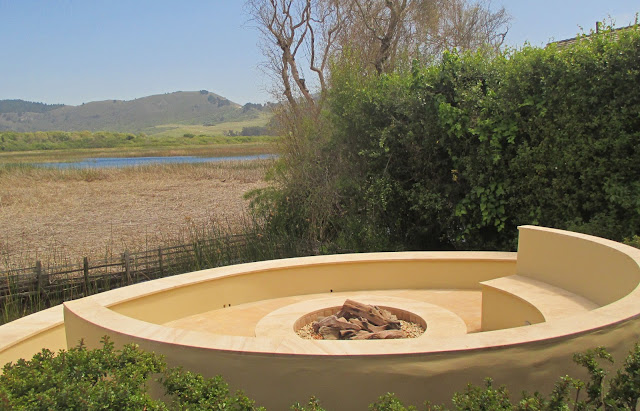 The grounds of the Cooperman Home which appears to seamlessly connect to the wetlands, was designed by Carmel landscape architect Michelle Comean. 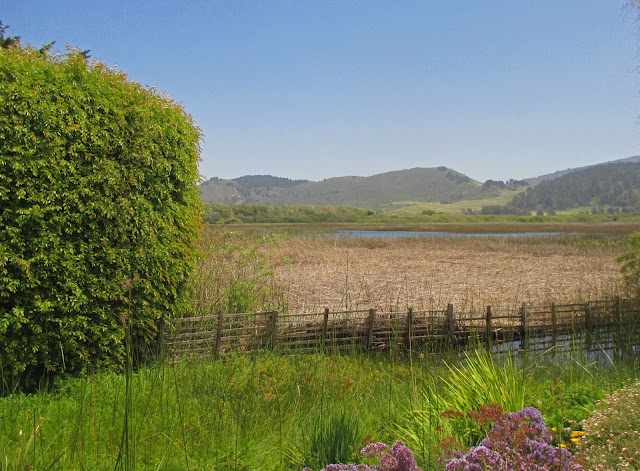 Here are some video highlights of the 2015 tour.

___
To view a map of the homes featured in this blog, please visit this link.