My First Rodeo - The Toughest Eight Seconds In Sports 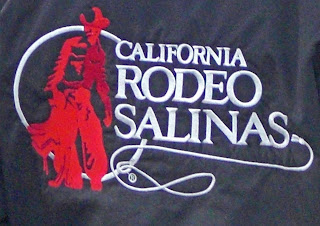 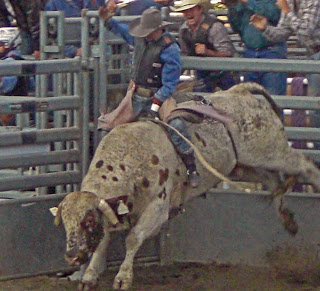 Salinas Rodeo brought out cowboys, cowgirls, hats, boots and belts of all shapes, sizes, ages and colors.  By 7pm the stadium was packed to cheer on home town favorite, Josh Daries of Salinas.

The announcer kicked off the night with a prayer
asking for God's blessing on all in and out of the arena. 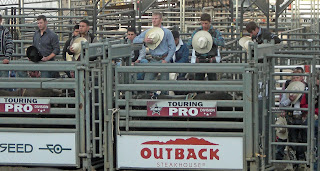 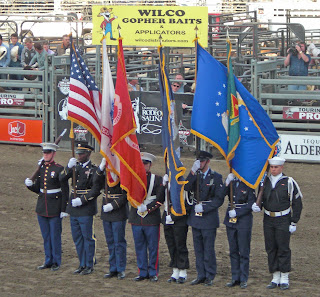 Next, the toughest eight seconds in sports. 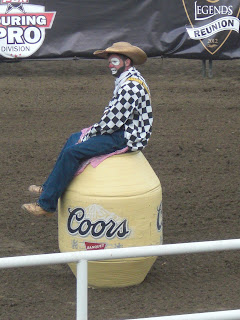 “Your Mama was a cow,” barrel man
Slim Garner yelled across the stadium. 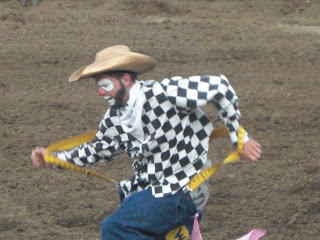 If Slim is trying to get these bulls riled up,
it isn’t necessary;
they are already pretty hot and bothered. 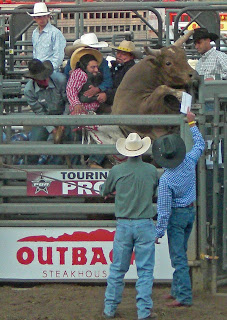 Wednesday July 18, 2012 brought Professional Bull riding to the Salinas Sports Complex.  Forty members of the PBR had an eight second job to do.  If they were successful in staying on one of the 1500 + pound bundle of pure muscle for a measly eight seconds (after it left the gate) they entered into a runoff for a $40,000 purse and secured a spot in the pro tour. 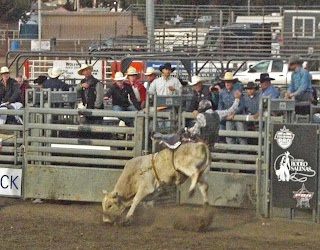 How hard could it be?


Point made - and that is just the ride.  Riders who qualify and are selected for the PBR tour are responsible for all their expenses and arrangements, hotel accommodations, transportation to and from events and anything else that takes them to that moment when they sit down on one of those immense animals... 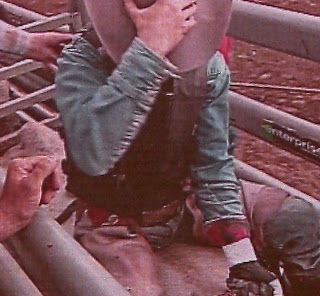 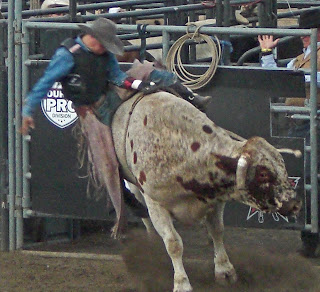 Who, by the way, are groomed lovingly by their stock contractor to buck them off.   'Hurricain', raised by Flying High Rodeo Co does his job quite well as Cord McCoy (Amazing Race 16 & 18) is unable to hold on. 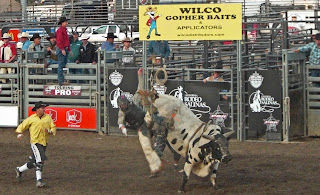 Why ride a bull?  I have no idea.  But if you did, what would you need?  Besides a lot of cojones (I read that in the Herald this morning), they need a bullrope and rosin. 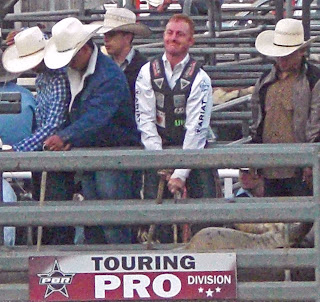 Bullrope is a thickly braided rope with a cowbell attached that it tied and tugged around the bulls belly.  You will see them on the ground after the rider falls off.  The cowbell acts as a weight so that the rope will fall off after the ride is over, or you are thrown from the bull, whichever comes first. 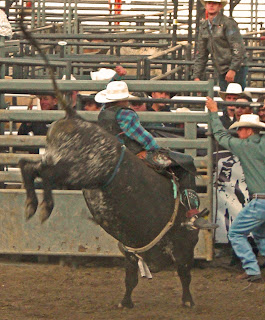 Either way the dismount from your bull is not gentle.  You are either thrown or jump.  In both cases you could easily be kick, trampled, or gored.


Resin is sticky and helps the rider grip the rope.  Which in this case might have been too sticky - 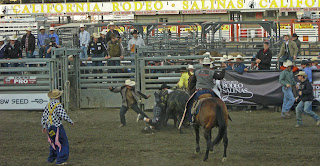 rider dragged after thrown off.

What do you wear?  Well if you had any brains you would wear a helmet.  Some do some don’t.  Do cowboys look good riding a humongous beast with a cowboy hat?  Yes, but it never stays on, nor does it serve any purpose when your head hits the ground! 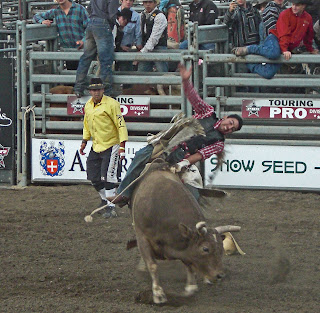 My hat goes off to all those cowboys who were not afraid of donning a helmet.  Wear a helmet – I worry less and enjoy watching the ride more. 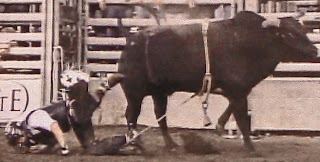 A vest is also worn which appears to be a bit heavier than the 1960’s Feelin’ Groovy Fringe Special.  So I approve of that. Chaps are primarily used as a fashion statement, and to keep dust off your pants.

Of course cowboys always wear spurs,
but use with caution - bulls hate them. 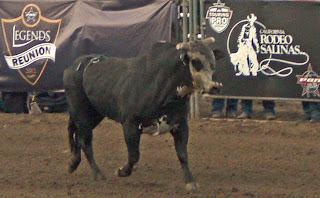 Besides that the most important item would be gloves,
and just for fun,  I would highly suggest a mouth guard. 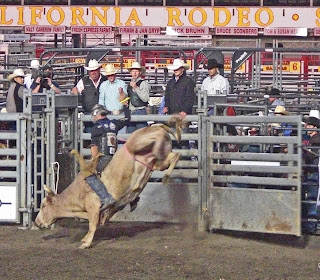 What are the rules? A qualified ride is 8 seconds. The clock starts when the bull’s shoulder or flank breaks the plane of the gate with rider on board.

Riders are scored if they stay on for the 8 seconds. 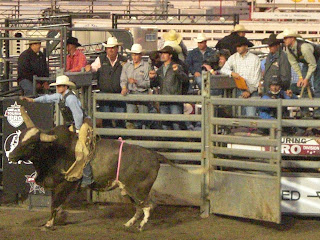 Bulls such as 'Baby Brother' shown
above and below
receive a score regardless. 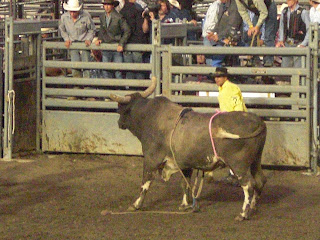 Four judges rate each rider and each bull on a scale of 1-25.  These points are added together and divided in half to reach a rider score and a bull score between 0-50.  Those numbers are then combined to reach a final ride score between 0 -100. The top twelve qualifiers do this all over again. 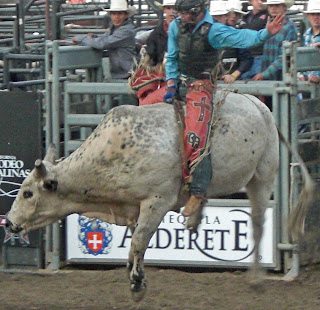 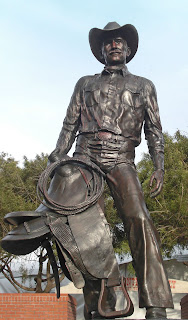 Josh Daries, 23, 165 pounds from Salinas was one of the original 12.  He qualified with the lowest score of 68.5 on his first ride.  First up in the second round he stayed on the mandatory eight seconds and scored 87.5.  One by one the other qualifiers were bucked off.


It was a great night at the rodeo, perfect weather, enthusiastic crowd, resilient riders and thanks be to God, no injuries.  Next year at the Rodeo Salinas I think I will learn about steer wrestling and tie down roping.