Carmel-by-the-Sea - A Look Back 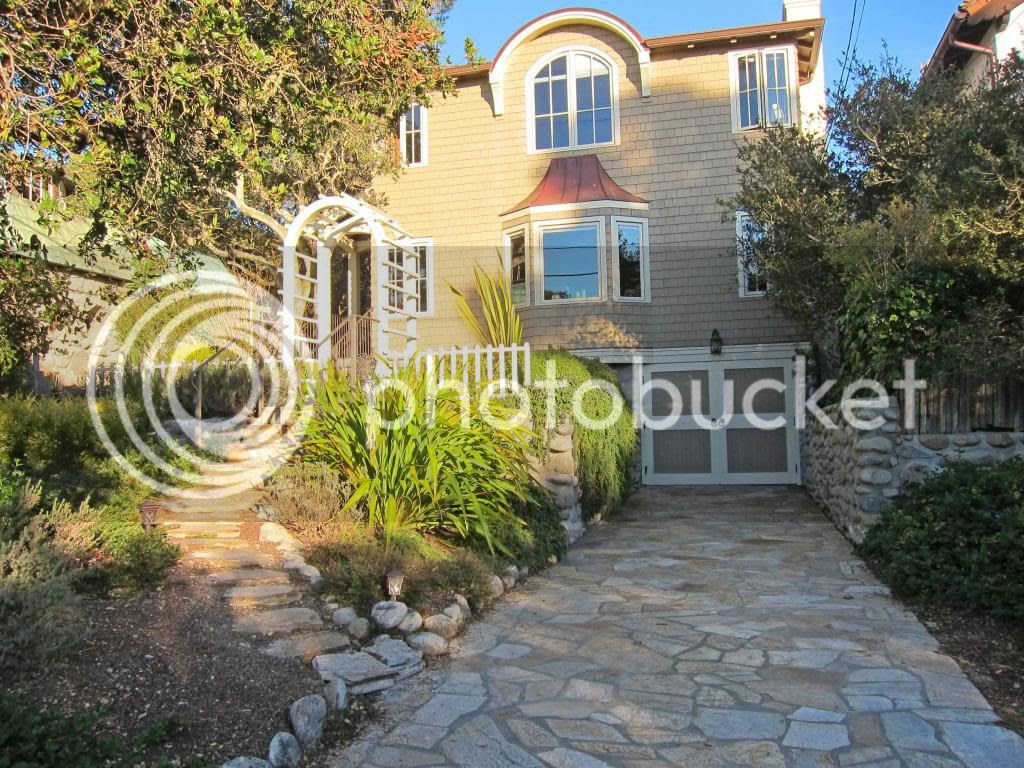 The following was written by Daisy Bostick for the Carmel Pine Cone, June 4, 1948 as part of a series of articles entitled Carmel Story:

I looked out of my upstairs window down on Santa Fe Street one early morning and to my utter surprise saw a cute little house traveling merrily, and with no visible means of support, up Ocean Avenue.  The picture was complete.  There it was – a real little painted redwood cottage, with porch, climbing vines, chimney, and curtains at the windows. It look at me roguishly as it passed and I could have sworn that it flapped a vine or two at me and that a wisp of real smoke was coming out of the chimney. And I thought I heard a mischievous voice say “Catch me if you can.  I’m running away.”


By the time I had recovered enough to run out to the highway, Little House was turning the corner at Guadalupe Street, but as it vanished I solved the secret of its locomotion.  It was on a truck and as it went up the hill, the low trees and shrubs at the side of the highway had hidden everything but the house from me, so it seemed to be self-propelled.  That was one mystery that I would have preferred to remain unsolved, for it isn’t every day that you get to see a runaway cottage floating gently up a hill just outside your bathroom window.

Now to backtrack a little.  In 1901, the Carmel Development Company had a lot of vacant land but few houses.  J. F. Devendorf (familiarly and lovingly called Devvy) ordered one hundred old San Francisco cottages to be sent down in sections which were to be reassembled after reaching here.  By the way, this seems to be the start of the prefabricated house industry but it didn’t have much success as only one cottage, a barn and a carload of doors arrived. 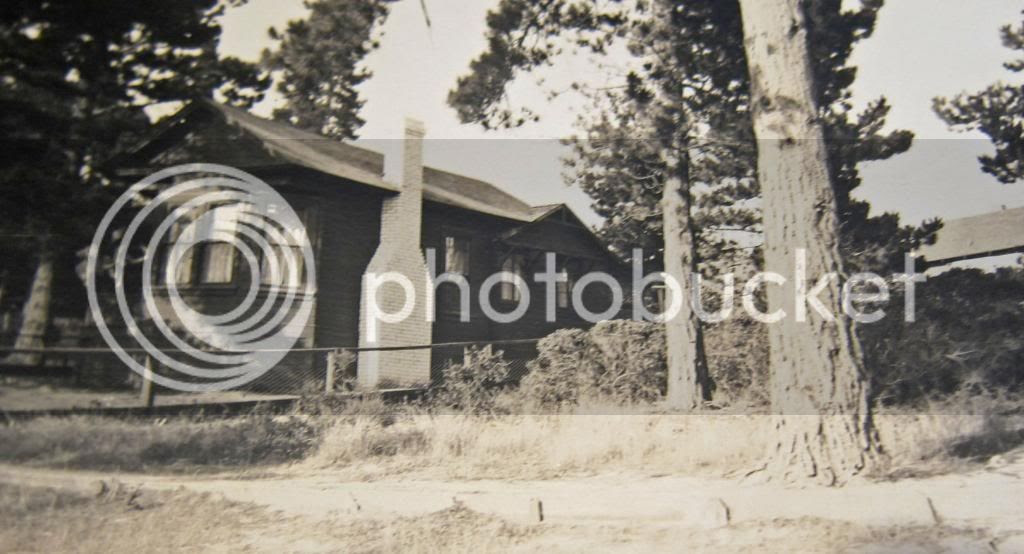 Allen Knight’s father paid three hundred dollars for the one lone cottage that showed up, put the various sections together on a lot belonging to him and his two sisters-in-law, Alys Miller and Agnes Miller.  This was the site of the present Sun Dial Apartments and this was the cottage that later decided to run away. 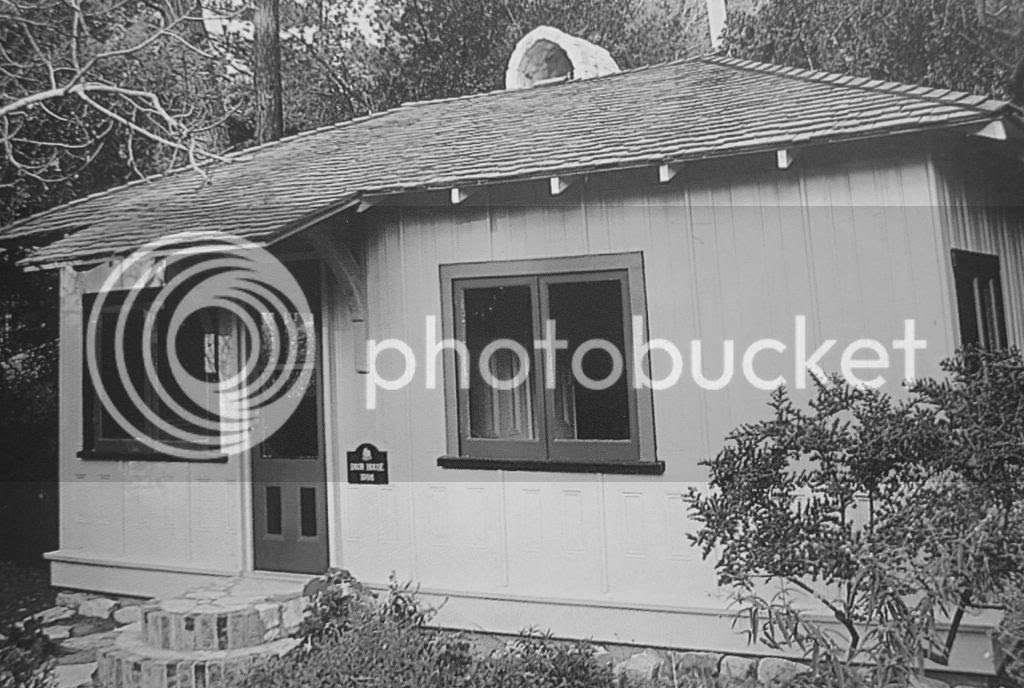 Door House
The carload of doors that formed part of the shipment was used to build a house which now belongs to a relative of the former owner, Mrs. O’Hara and can still be seen on Lincoln between Eighth and Ninth.  The barn was acquired by Miss Eunice Grey who placed it on Camino Real near Santa Lucia.  Later she built a new house on the adjoining lot, and wrote a charming book entitled Cross Trails and Chaparral.  Many changes came to the old barn even during Miss Grey’s lifetime, but it has lately been acquired by Mrs.  Emmy Blamer, who has handled its renovation with a magic touch, furnished it with her beautiful early American pieces and made it into one of the most charming houses to be found in this vicinity. 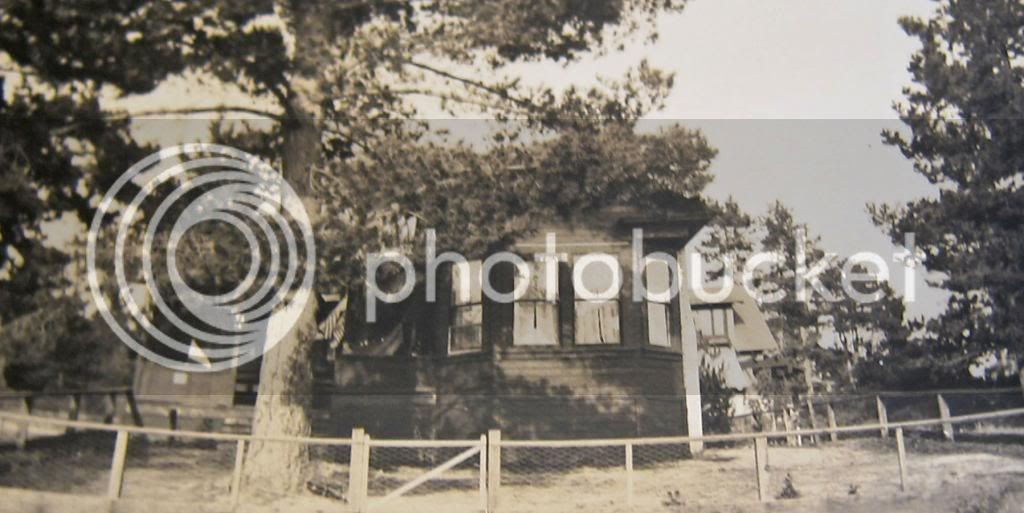 Knight House Guadalupe & 6th - c. 1929-1935
Now to return to the little cottage which ran away up the hill on an early morning.  Its seems that along with it there was a tent house in the grounds.  Originally canvas, it had been shingled outside and lined inside with some sort of beaverboard.  Allen Knight, then a gay young bachelor had been bunking in the tent house.  One night he had attended a studio party with Fenton Foster and on returning to his home at a late hour was too sleepy to realize that the house was on the sidewalk and had been placed on wheels all ready for an early morning jaunt to its new location alongside of Runaway Cottage.  He went to bed and was just getting into a sound sleep when the truck started to roll. Allen, who as man and boy had been inclined to a seafaring pastime, came half awake and thought first that he was on the briny deep.  He chronicles his subsequent adventures as follows: “When I looked out the window and saw the Episcopal Church going by, I knew then that something unusual was doing.  When we turned the corner at Monte Verde and Ocean, the truck hit a culvert and the furniture began playing leap frog over me.  I grabbed for my shirt and my pants and in the midst of much pitching and rolling managed to get partially clothed.  Unaware that he had a passenger, the driver was only intent on getting that load up the hill and didn‘t hear my frantic bawling to stop.  When we reached Dolores, I made up my mind to jump.  And I shall never forget the look on the face of a lone pedestrian (it was six o’clock in the morning) as he saw a scantily clad figure sail through the air with the greatest of ease and land on the sidewalk beside him.” 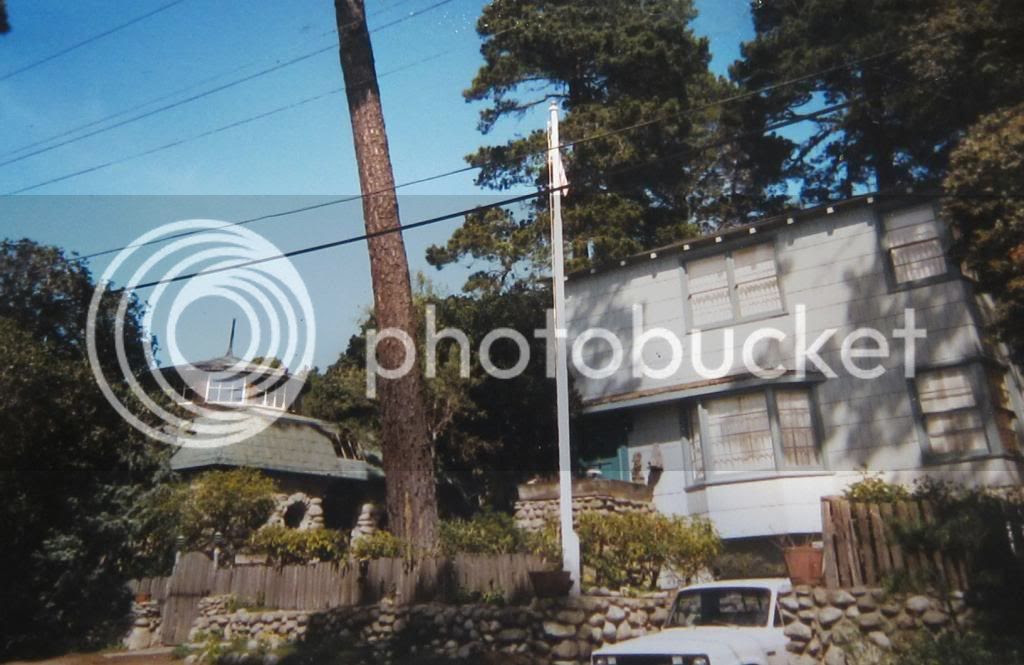 Knight House Guadalupe & 6th - Sometime after 1939 addition
Historical Note:  Allen Knight's father assembled the home on their property at Monte Verde and Seventh Avenue in 1901.  It is believed to have been the city's 6th house.  In 1929 the home was moved to Guadalupe and Sixth to make room for the Sundial Lodge to be built on the property on Monte Verde and Seventh.  In 1935 Allen Knight added a second story to the home and built the Ship House next door in 1939 to house his nautical collection. Today the home still stands at Guadalupe and Sixth.  Many additions have been made since 1935 but the pop out picture window remains the common thread for over 100 years.
___
Credits
Knight House Guadalupe & 6th - Photo by L. A. Momboisse 1/2013
Knight House - Henry Meade Williams Local History Room, Harrison Memorial Library Collection, The Allen Knight Family Collection Photographs