Skip to main content
Labels
Posted by Adventures of A Home Town Tourist May 05, 2014

In 1976, "born of frustration and nurtured by anger, a grassroots movement sprang up in Carmel with the avowed intent of halting deterioration of the village.  The group Old Carmel was conceived and gained notoriety through its efforts to save the Village Corner, long a favored stopping place of local residents. 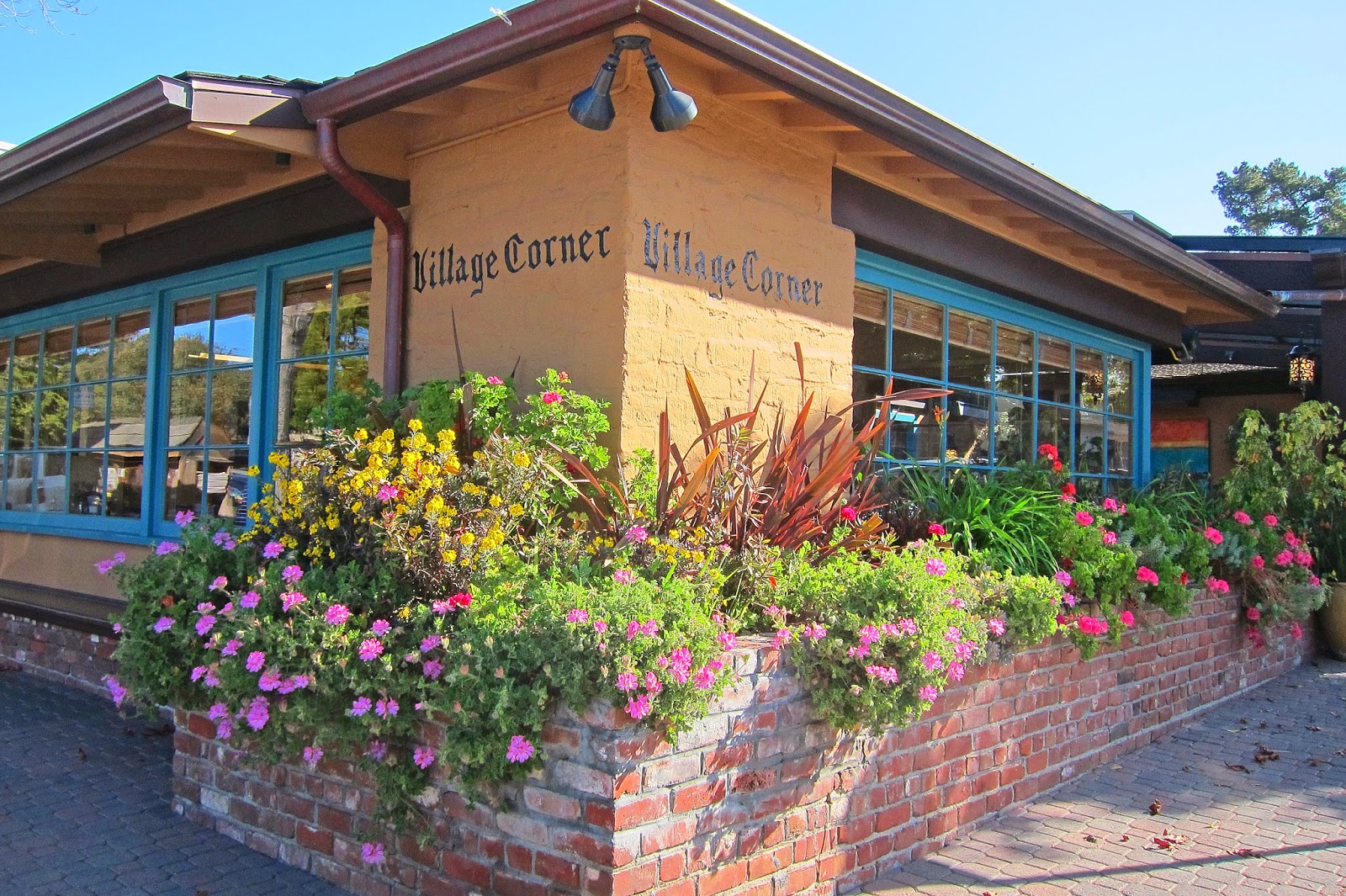 When threatened with a loss of lease and possible conversion to some other purpose, the Village Corner became a rallying point for residents concerned with the proliferation of tourism as Carmel's chief source of business. With well over 300 members, Old Carmel rapidly established itself as a potentially powerful political movement." (1)

Old Carmel counts the saving of the Village Corner as their first victory. "Ben Lyon, Randy Reinstedt, George Faul, Mindy Faia and several others banded together to help then owner George Rockwood to keep the popular restaurant on the northeast corner of Dolores Street and Sixth Avenue.  The group initially named itself The Old Carmel Foundation which eventually evolved into Carmel Tomorrow." (2) 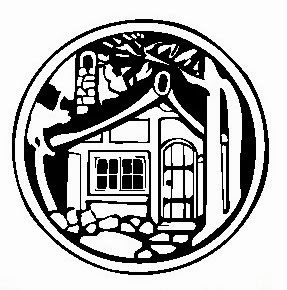 Carmel Heritage Society
"It's Ours to Protect"

Carmel Tomorrow was dubbed a "politically potent organization" and fell into disarray. In 1984 it was reborn as a new non-political group called Carmel Heritage.

"Virginia Stanton, the first president of Carmel Heritage told the Carmel Pine Cone/Carmel Valley Outlook that the group plans to work toward preservation of the village's past without dabbling in political controversies." (3) 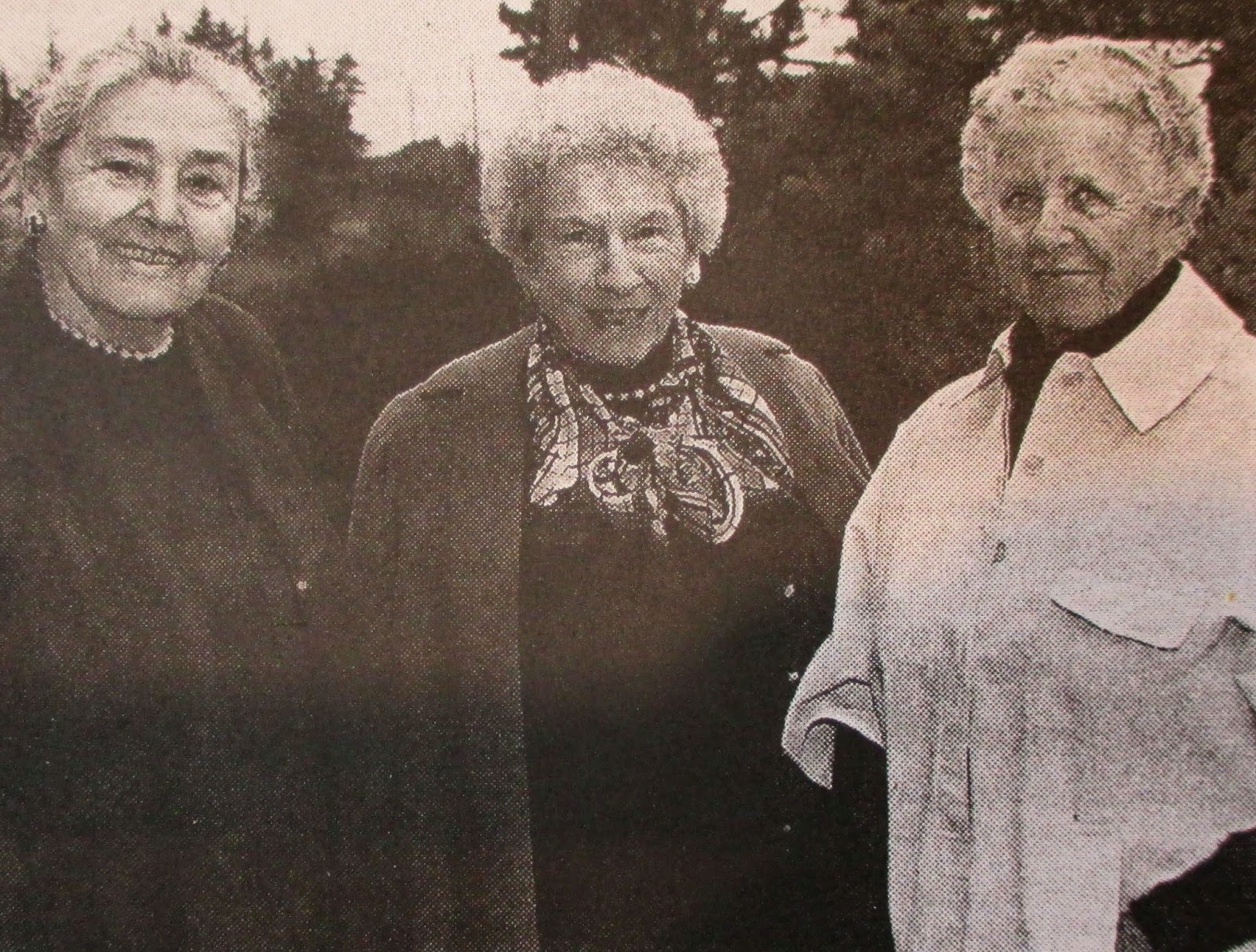 Thirty years later the Carmel Heritage Society, a non-profit organization, is still serving the City of Carmel. Their mission is to protect, preserve and promote the cultural heritage of the community in a way that encourages public recognition and participation so that people will have a greater knowledge and appreciation of the community of Carmel and its sphere of influence.

Carmel Heritage Society provides the community of Carmel with a variety of historic gifts and venues.

Besides their current project of cataloging and archiving numerous historical documents and photos from the last 100 years, the Carmel Heritage Society hosts two charming and informative tours yearly. The House and Garden Tour and Inns of Distinction are well worth the price of admission. Check out Carmel Heritage Society's Facebook page for more details. 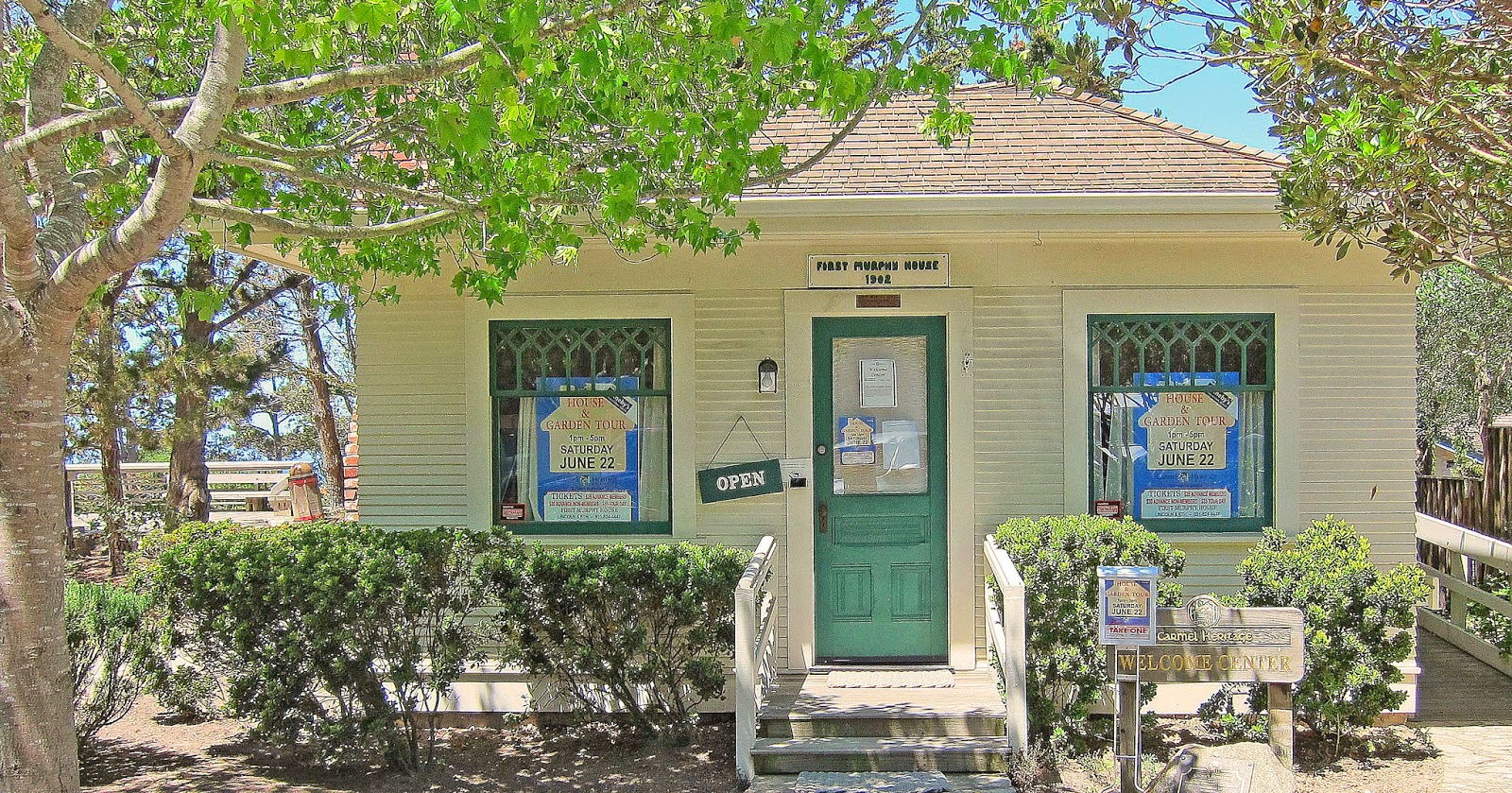 Carmel Heritage Society's home is First Murphy House, which is a living history museum of the 100 year history of Carmel-by-the-Sea.  One piece of this living history stands just outside the front door.  It is the wooden Milk Shrine, once used by Carmelites for their milk deliveries. 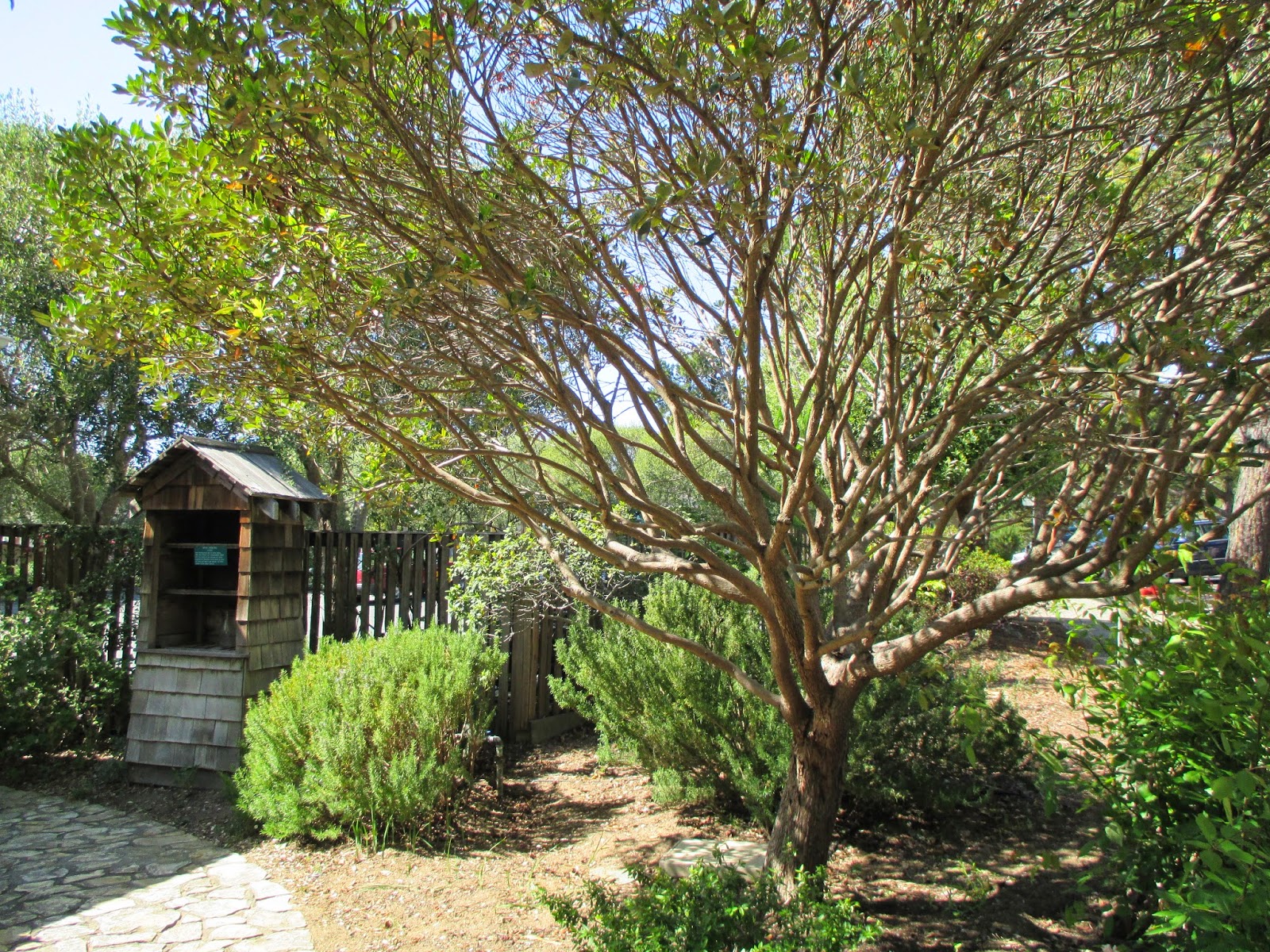 First Murphy House is staffed by volunteers and the hours are posted on the front door at Lincoln and Sixth. 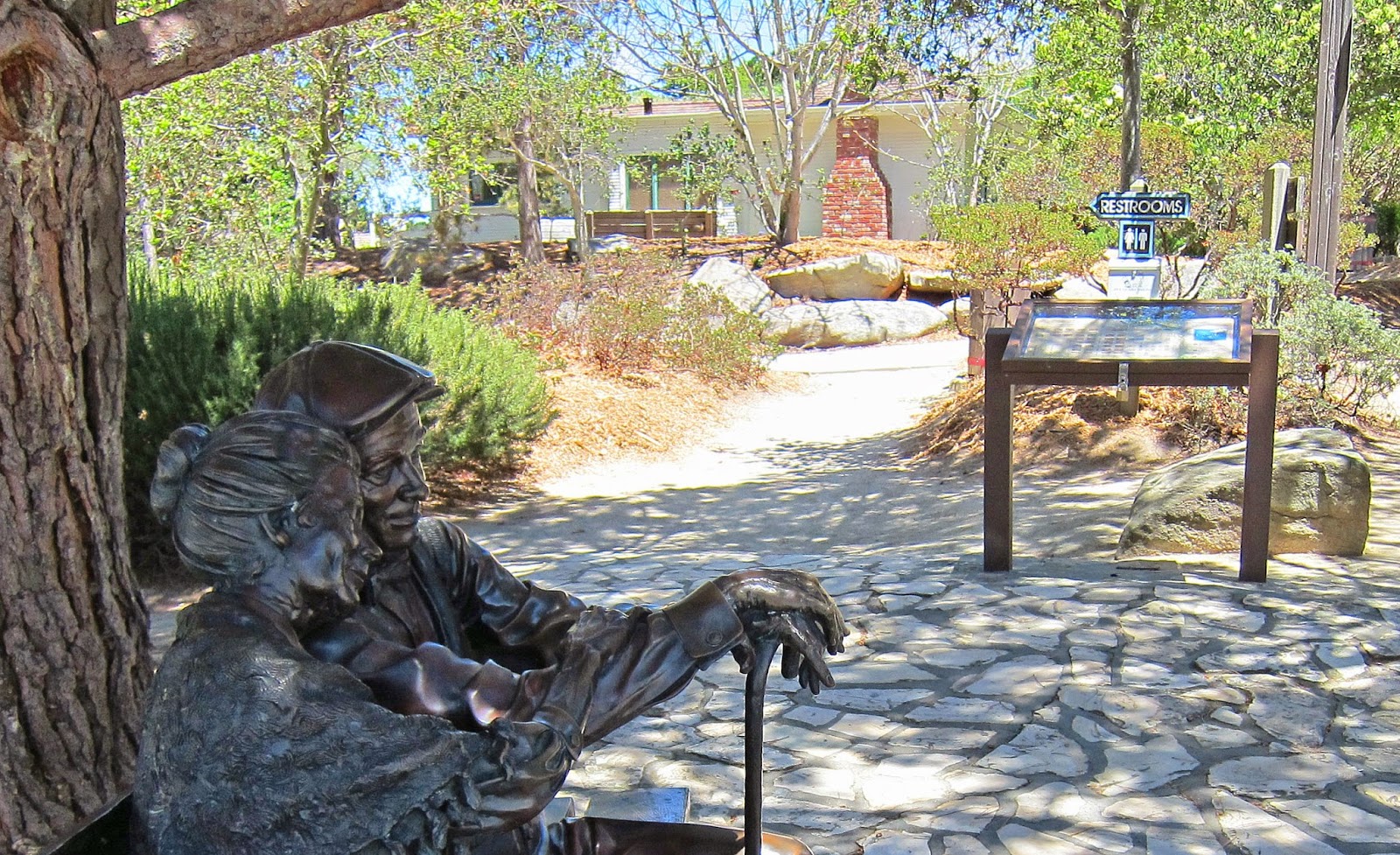 First Murphy Park is a wonderful addition to the grounds of First Murphy House. It is an area of native plants and benches, and a delightful place to sit and just let time pass.

In 1994, The Valentine, a bronze sculpture figure by George Wayne Lundeen, of an elderly couple seated on a bench was purchased by the City of Carmel for $40,000 to grace the southeast corner of the park. 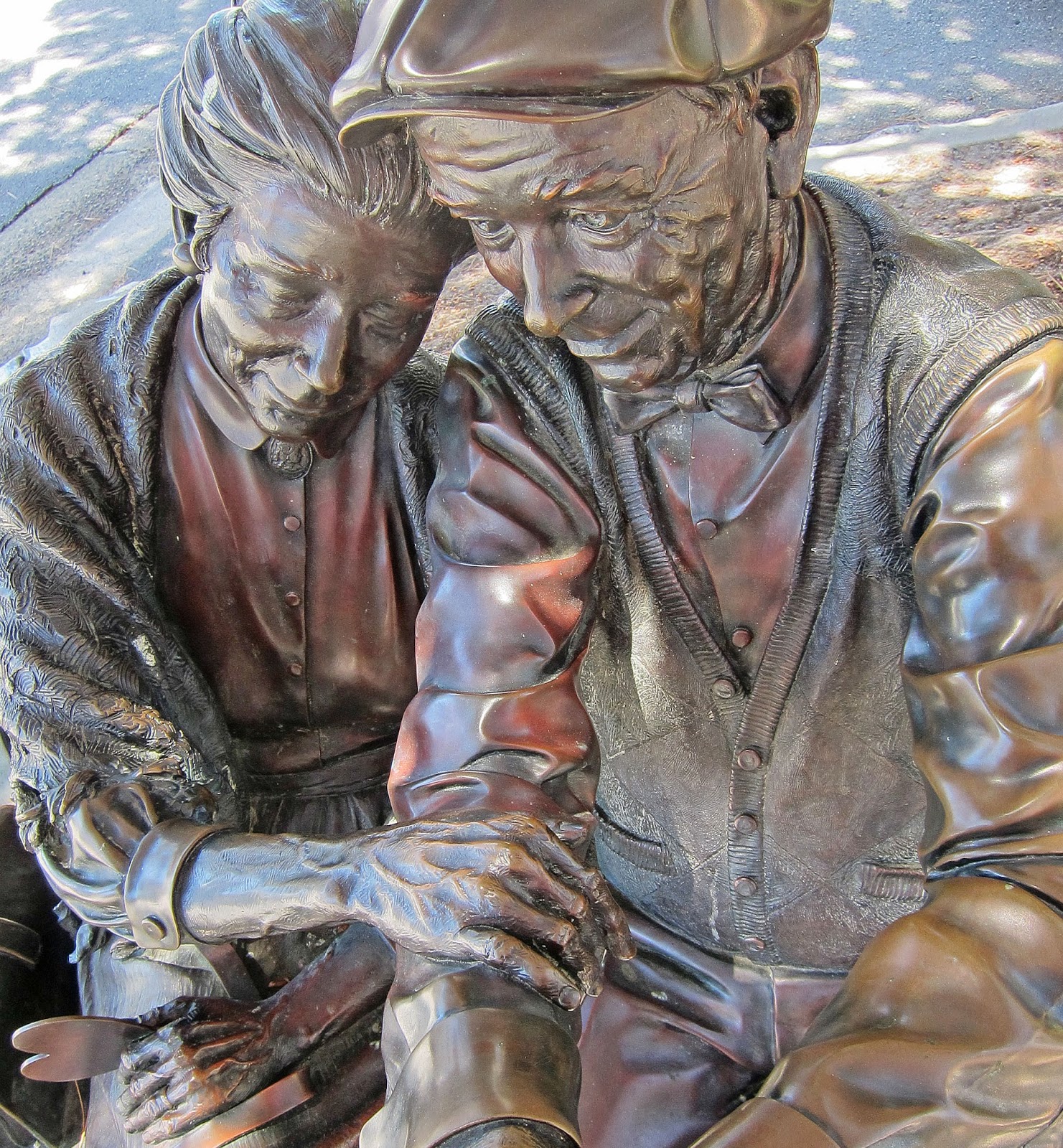 "As someone views and touches a piece of my work, it is  my sincere hope that they will look past that hard surface of bronze to find the life which I try so much to capture within." (George Wayne Lundeen)

Mr. Lundeen most certainly captured life in The Valentine.  Every time I walk by this statue, I am reminded of my parents who honeymooned at the Pine Inn in 1940, and were married for 70 years. 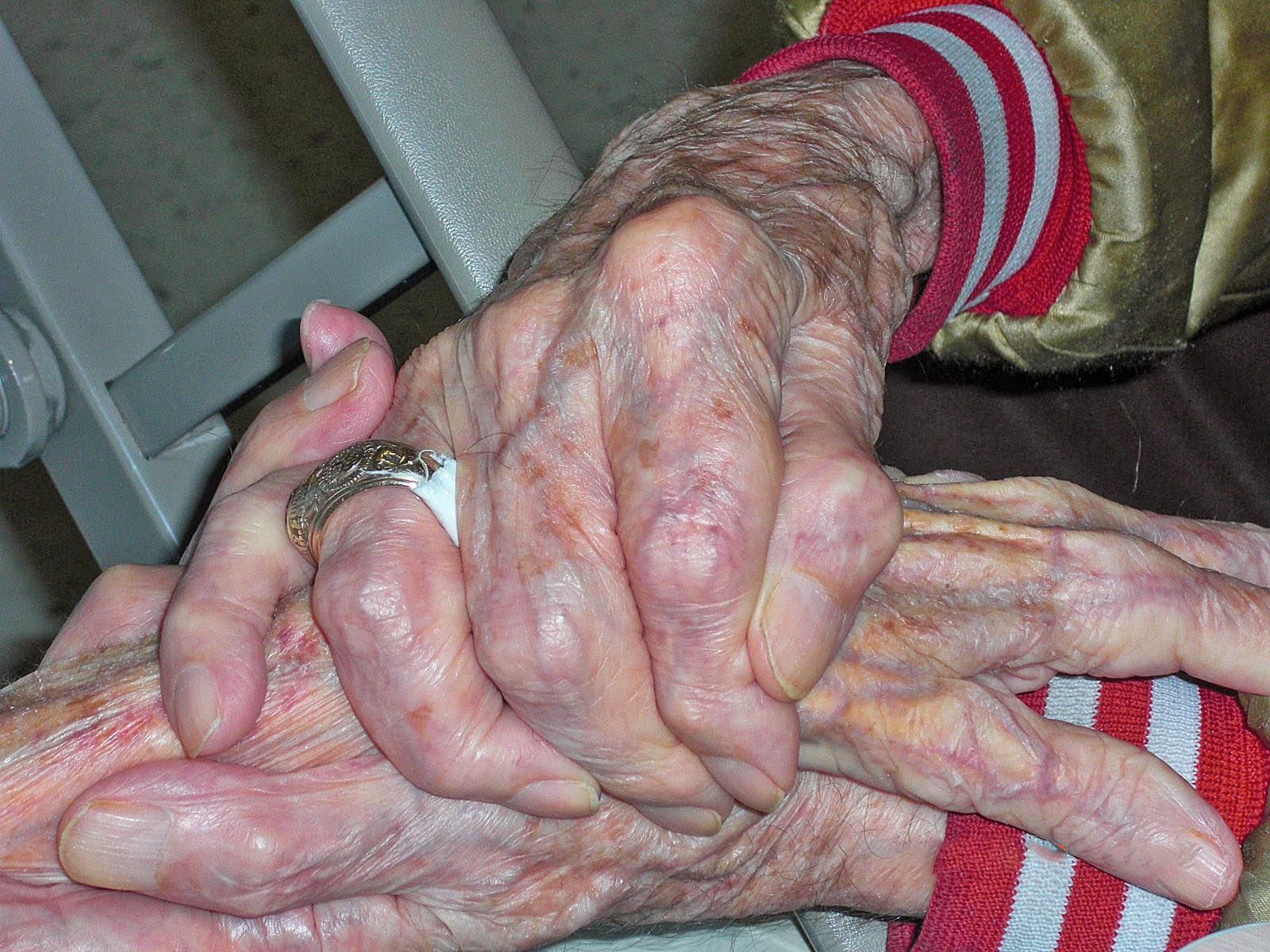 If you visit the living history museum at First Murphy House, take time to meander the paths of First Murphy Park. 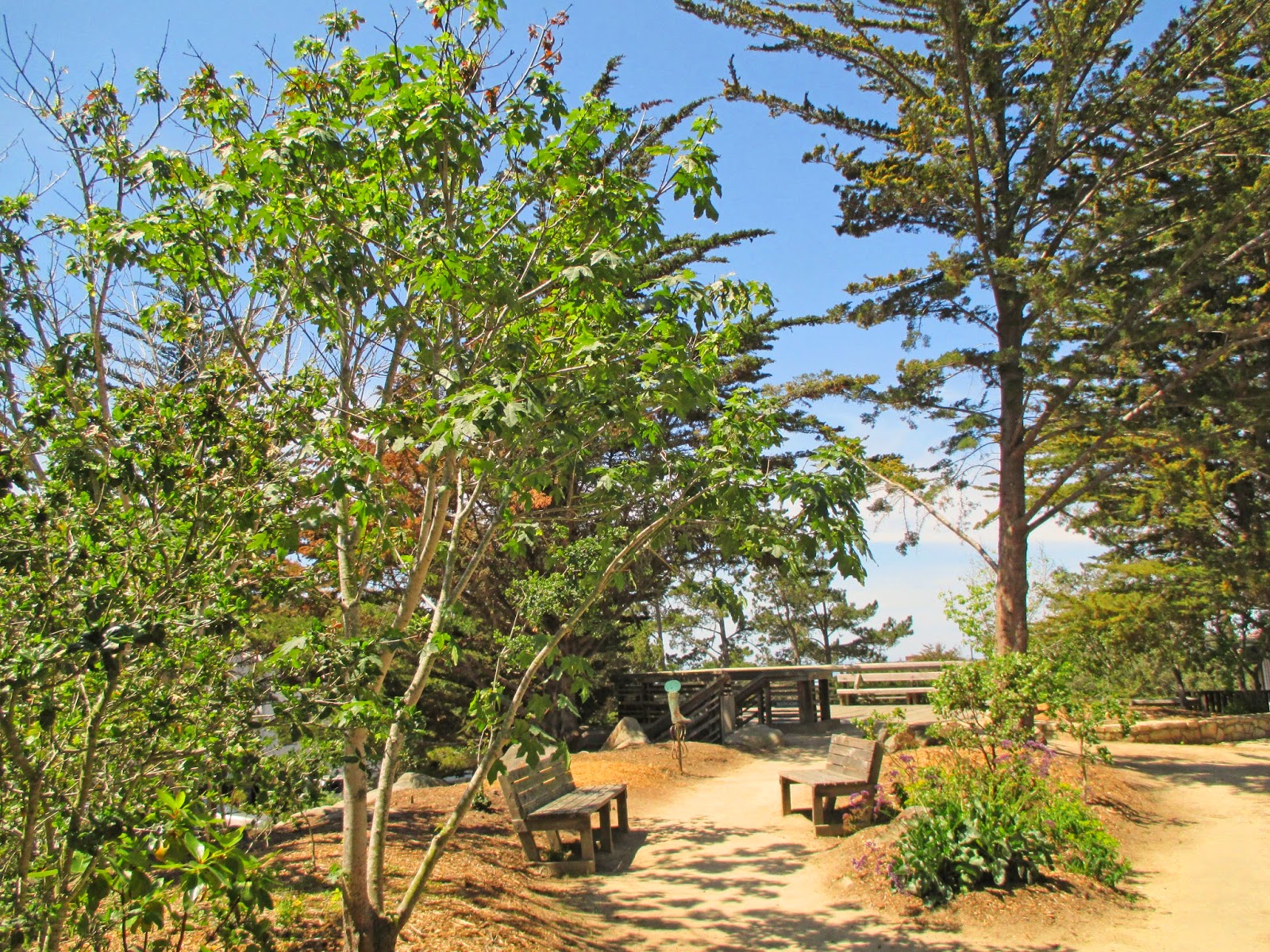 Rest on a bench,
or check out the upper deck
with it's ocean view. 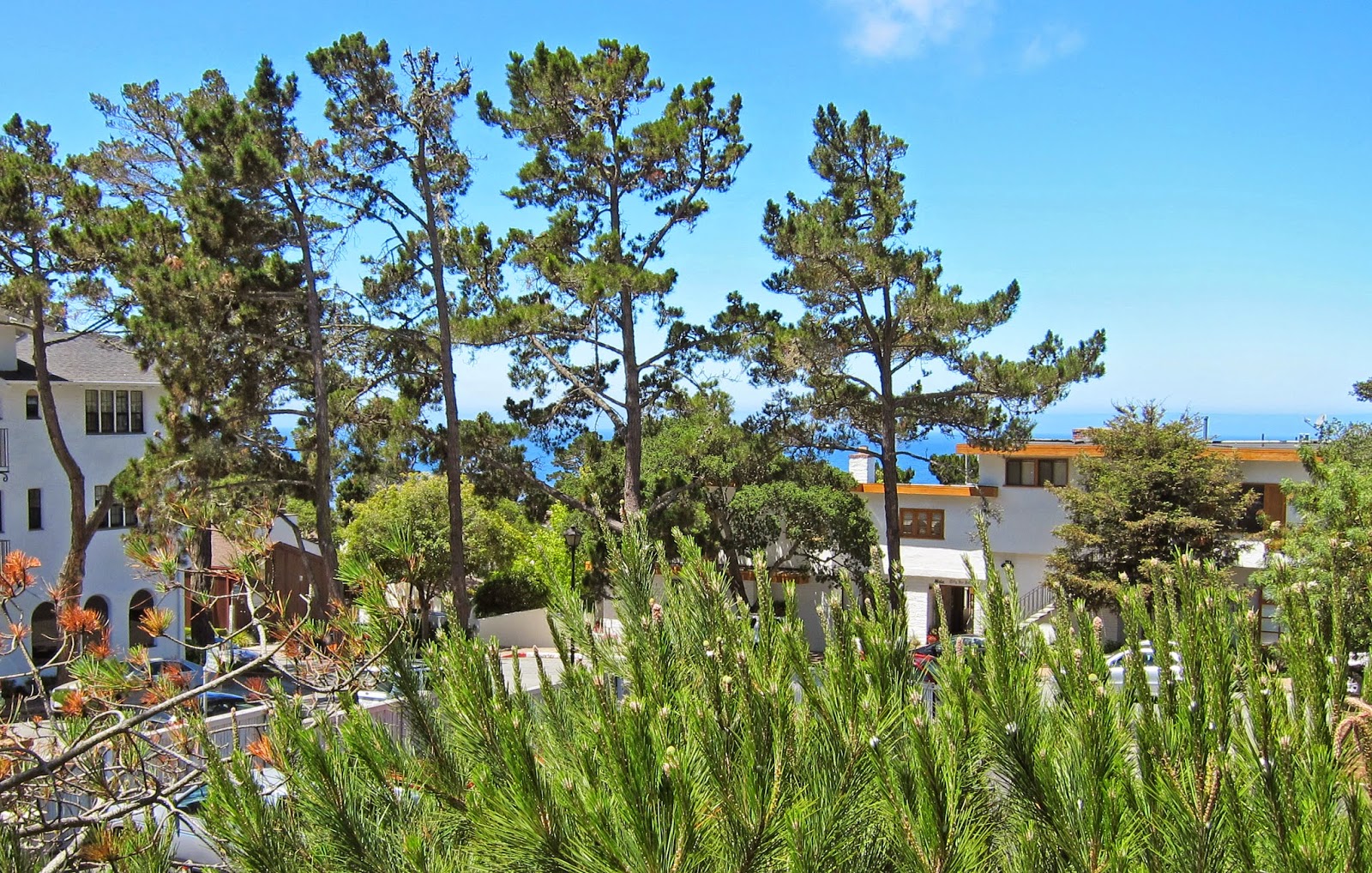 The landscape
with it's wall of large boulders,

was designed for Carmel's
maritime climate with native and drought
resistant plants such as Sea Lavender, 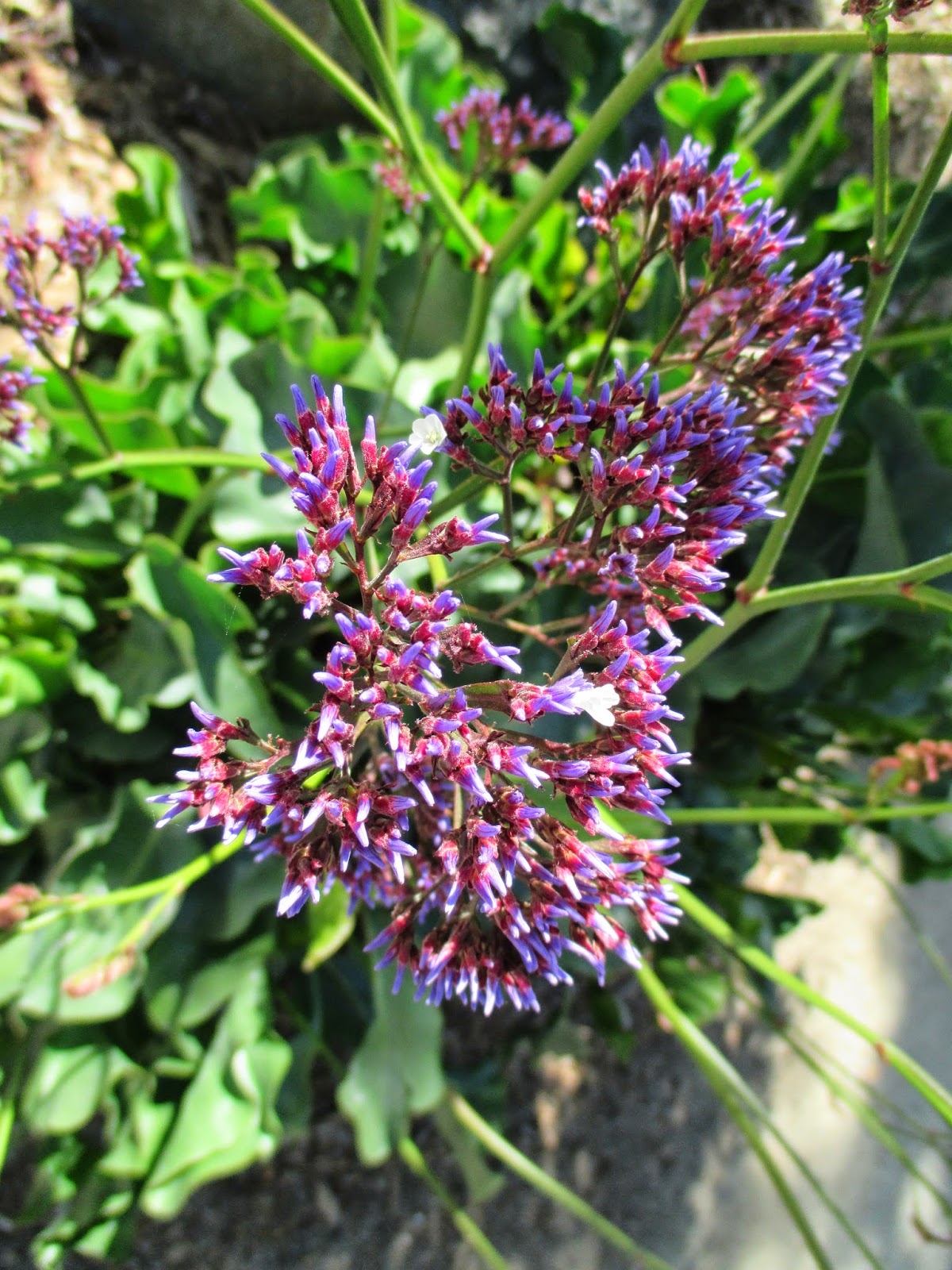 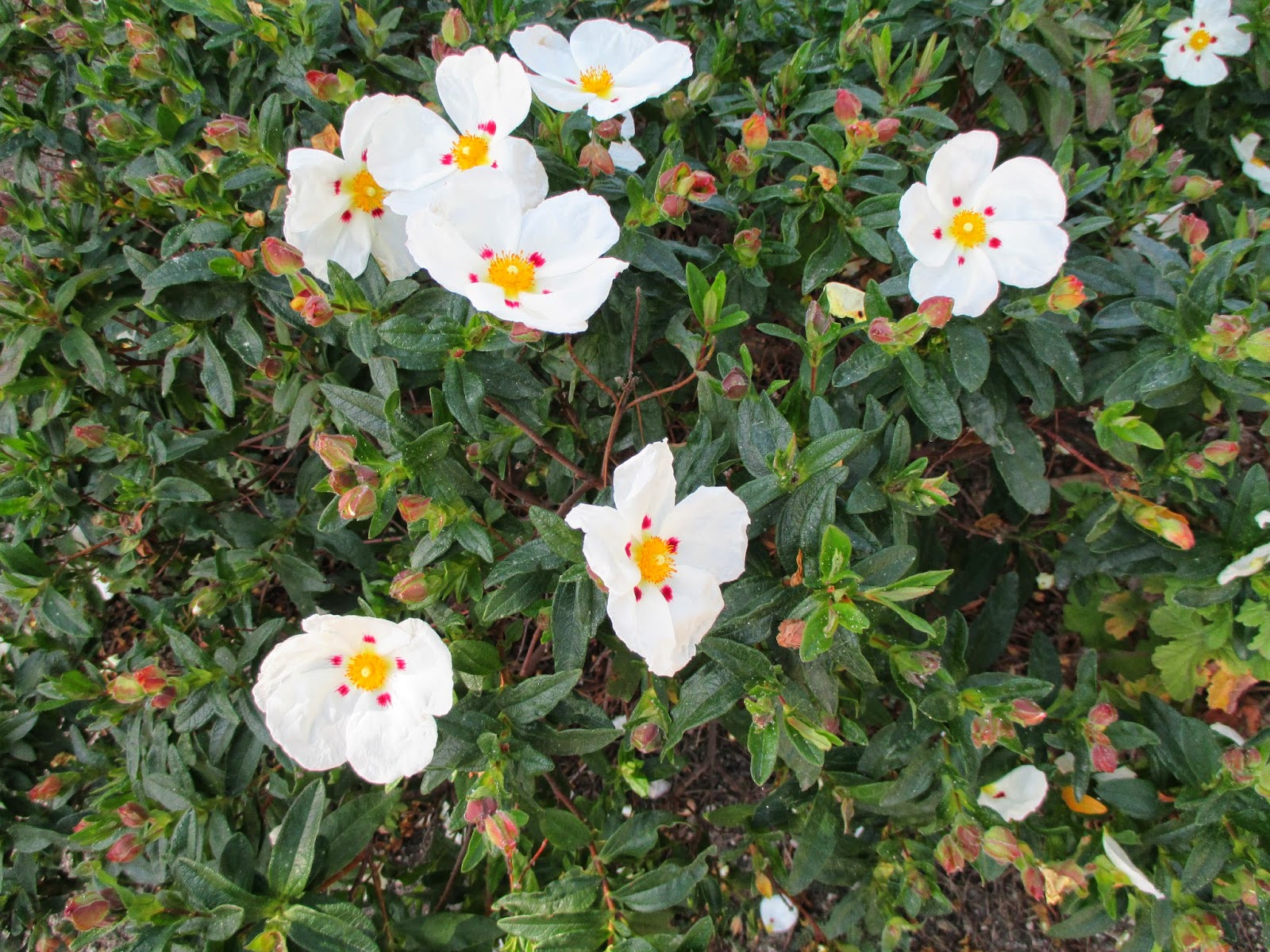 The newest addition to the grounds is a commemorative bench dedicated in honor of Enid Sales, a historic preservationist, who was also instrumental in the community effort to save First Murphy House. 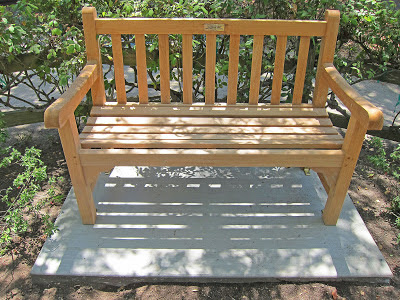 The First Murphy Park is open sunrise to sunset.  There are public restrooms at the southwest corner of the park.

For more of my self-guided walks of Carmel