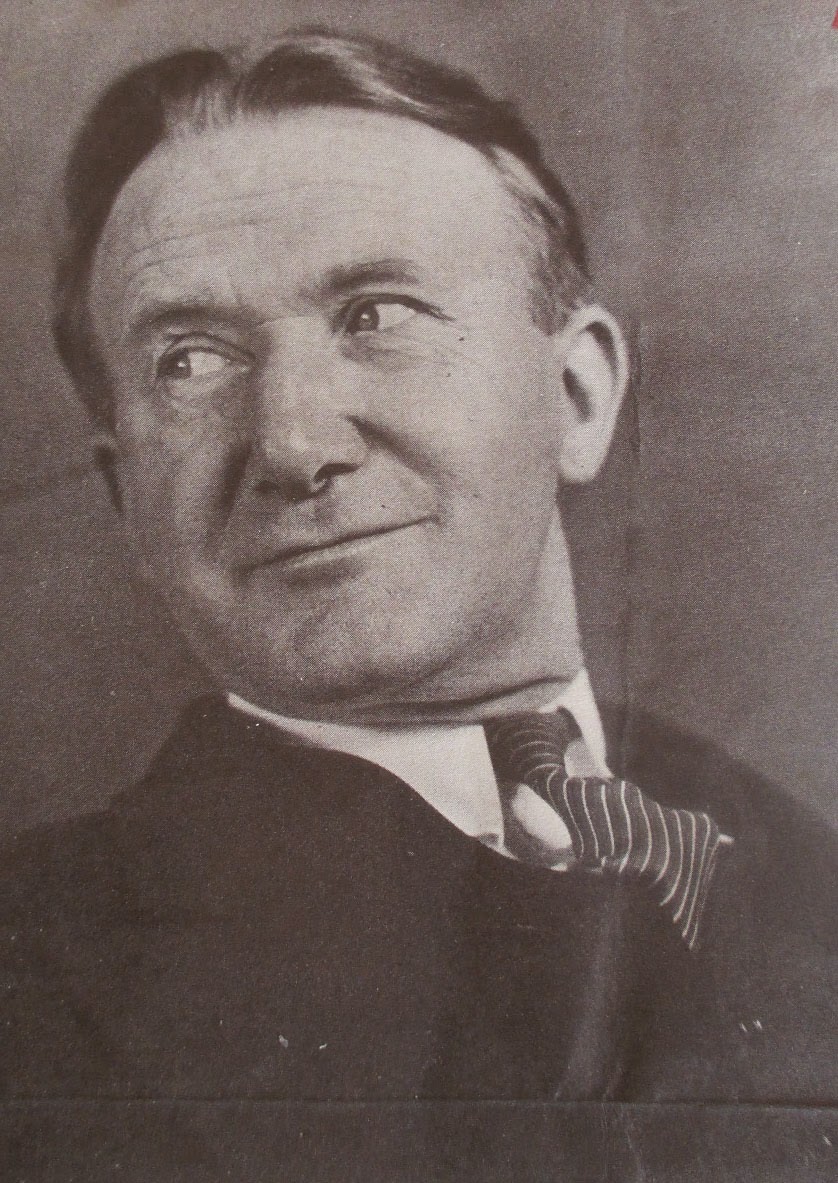 
Edward Kuster, former husband of Una Jeffers (c. 1901 – 1913) moved permanently from Los Angeles to Carmel in 1921.  After 21 years as a successful attorney in southern California, Kuster would now put all his efforts into his real passion - Theatre.  With an upper case “T,” please.

When Edward Kuster arrived in Carmel, he was thrust in to the middle of a personal dispute that had been going on for almost 10 years between Herbert Heron and Perry Newberry.

Heron who founded the Forest Theater in 1910 worked and acted amicably for  two years alongside Newberry before a feud ensued regarding Bertha Newberry’s rights to the play “The Toad,” which she had submitted as an original piece for the 1912 Forest Theater season.
“In 1921 Heron was the director of the principal 1921 Forest Theater production, “The Countess Cathleen.”  At his request I (Edward Kuster) composed and orchestrated the music for the play.  While I was engaged in this Perry Newberry advised me to drop  it, stating that without co-operation Heron’s production would fail, and that it was better that the Forest Theater should “commit suicide” that summer, so that a complete re-organization could take place.

I not only refused to take Newberry’s advice, but told him that I was interested in the theatre and not in village intrigue and that rather than see the  Heron production fail I would offer Heron all of my time on his production.”  (1) 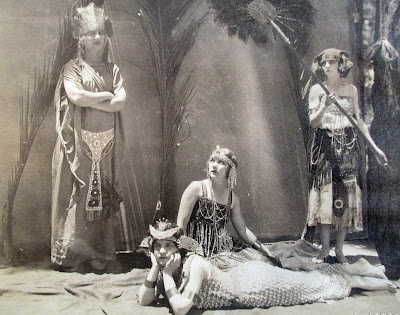 With Kuster’s success in the production of “The Countess Cathleen,” the Board of the Forest Theater Society elected him President of the Board in 1922 and director of their principal play “Caesar and Cleopatra,” the same year. 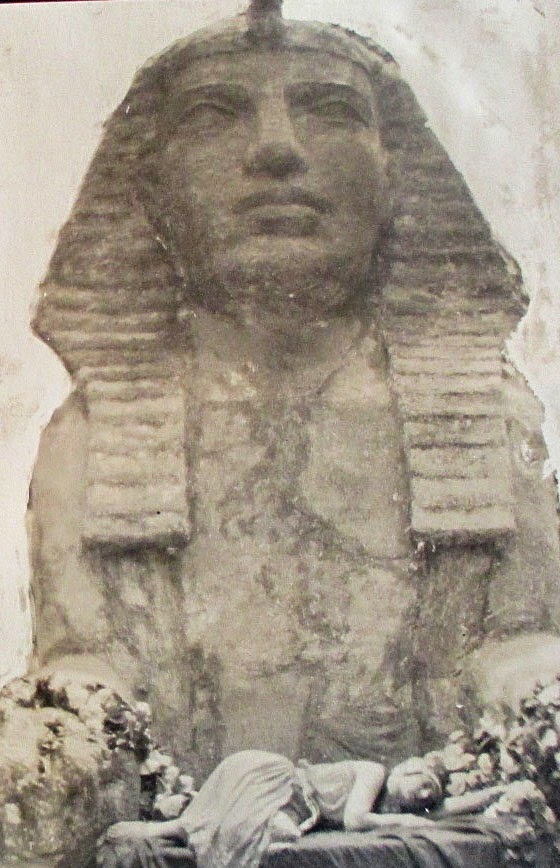 The set on the Forest Theater stage was dominated by a large replica of the Sphinx designed by artist Jo Mora.

Carmel citizens were not pleased with Kuster, as he had masked their beloved pine trees, the symbol of the Forest Theater, with his elaborate stage sets for this theatrical production. 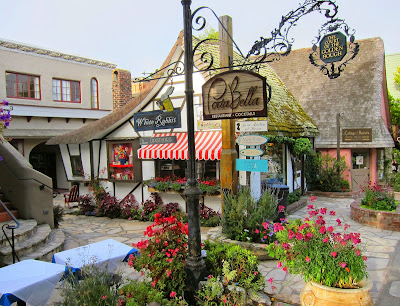 A Bit of Old Europe

"In Carmel-by-the-Sea, on Ocean Avenue, there is a group of little shops that might well be transferred to an artist's canvas labeled, A Bit of Old Europe.  They have curving, graceful roofs, some with mottled colors, some thatched, some reflecting copper tints when the sun filters through the pine trees... 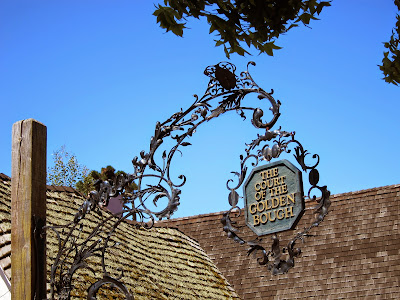 Over the sidewalk marking the entrance to the stone pathway between two of these shops, and projecting from a tree, is an old wrought iron sign representing a graceful bough, its leaves worked out in delicate traceries and its main branch following the double curve of the line of beauty. It was the oldest and most beautiful of the signs in Lucerne, Switzerland, and was brought to Carmel with great expense and difficulty and marks the entrance to the new Theatre of the Golden Bough." (3)

Building of the Golden Bough

In 1923 Edward Kuster designed his indoor theater, and hired Lee Gottfried to build the structure.  He set his theater in the rear of a courtyard in the newly burgeoning city center of Carmel off the south side of Ocean Avenue between Lincoln and Monte Verde. 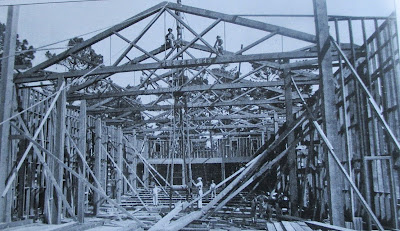 This was no ordinary theater it was filled with special features such as: a music pit under the fore-stage, a rolling sky-dome, and a multicolored lighting system operated from a light booth set high in the rear of the auditorium. 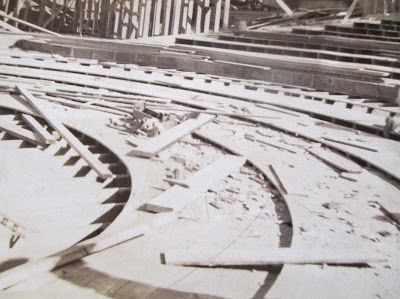 The fore-stage projected far into the auditorium in a semi-circle.  Four hundred comfortable wicker chairs rising tier after tier would be used instead of the usual folding theater seats. 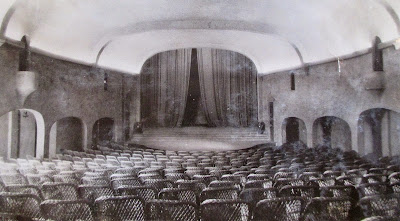 To enhance the Old European feel, Kuster added a few more shops.  He moved the Carmel Weavers Studio (built by Lee Gottfried) from the southeast corner of Dolores and Ocean to the front of his new theater in 1923. 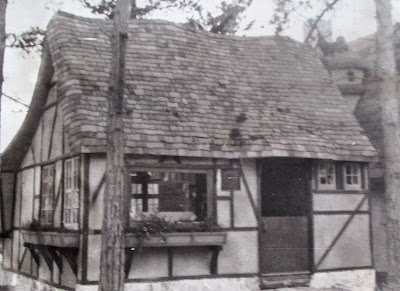 A ticket booth was added to the back. 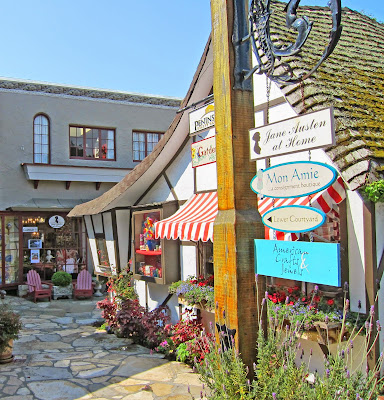 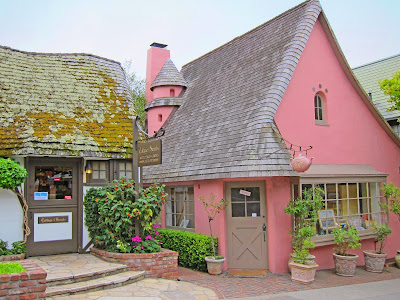 ...with its miniature turrets (now the Tea Rose Collection) in 1923. 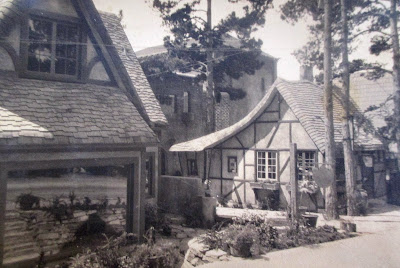 To round out the courtyard he had Lee Gottfried build the Tudor Revival building (now PortaBella Restaurant) in 1925.

Edward Kuster opened the Theatre of the Golden Bough in June 1924. He hired Maurice Browne and Ellen Van Volkenburg, founders of the "Little Theatre Movement," to help him with directing, and in rapid succession they produced modern plays, classics, pageants and original productions.

The Golden Bough had theatrical people from New York to San Francisco talking and in less than two years it was returning a profit.

In 1930, Kuster bought out the struggling Arts and Crafts Playhouse (at the time owned by the Abalone League) on Monte Verde between Eighth and Ninth and used the site as an auxiliary to the Golden Bough Theatre. 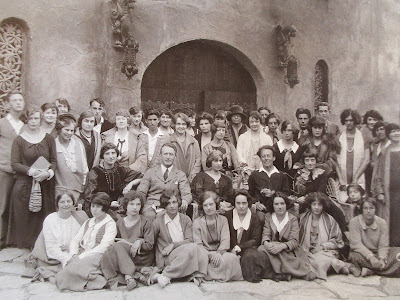 On May 17,1935, Edward Kuster presented "By Candlelight" his own adaptation from the original German of Siegfried Geyer's Viennese comedy.

Critics hailed the production.   Two days later on the 19th, with no production scheduled, the Theatre of the Golden Bough was destroyed by fire. Arson was suspected.

After the fire, Edward Kuster left Carmel for awhile, opening the Golden Bough on Sutter Street in San Francisco.  But the allure of Carmel called him back.

In 1940 he returned to Carmel and to his auxiliary theater on the Monte Verde between Eighth and Ninth.  He remodeled the ramshackle old frame structure he had used before - redesigning the proscenium, simplifying the decor and upgrading the front entrance.  Kuster named his new theater the Golden Bough Playhouse.

He showed motion pictures during the week, interspersed with plays one night each week.  Kuster was back and his new playhouse was thriving.

In 1949, the 26th season of the Golden Bough, Kuster decided to revive his 1935 production of “By Candlelight.” 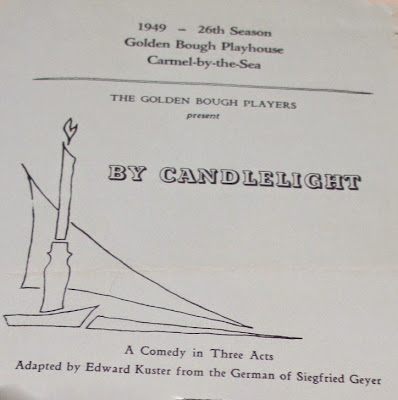 "Edward Kuster, in reviving "By Candlelight" in his Golden Bough Playhouse last Monday night won new laurels for himself as producer, actor and translator, by treating the capacity audience to an evening of sparkling comedy and well nigh flawless acting... 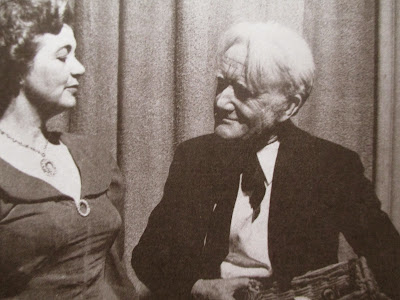 And it was his adaptation that he used in his first presentation of "By Candlelight" in the original Golden Bough Theatre on the eve of its destruction by fire.  Dramatic critics from San Francisco and all parts of the state termed that first production "a brilliant piece of work...done in a professional manner that is so rare it is almost absent from amateur theatricals."...Monday evening's performance moved swiftly and gracefully from the first moment, sophisticated repartee was lightly tossed from character to character with true professional ease and admirable timing."  (4)

While Broadway was experiencing flops and dark houses, and Hollywood was in the deep doldrums, Carmel's Golden Bough Playhouse was playing to packed houses and scheduling extra performances.  On May 16, 1949 "By Candlelight" opened to a capacity crowd.

In the pre-dawn darkness of Saturday May 21, Carmel residents were awakened by the shrill sound of sirens. 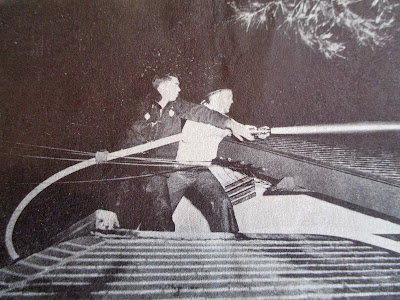 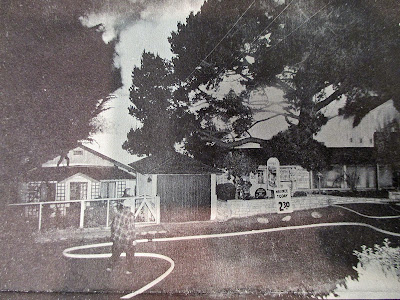 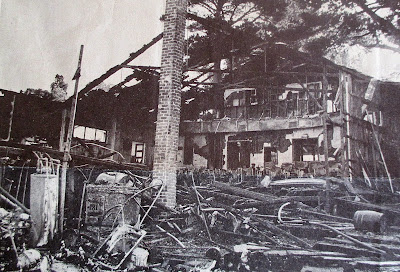 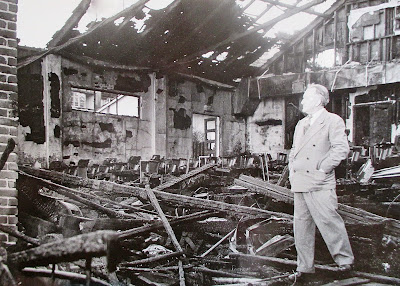 "As for "Candlelight" - cast and staff and friends of the Theatre have created a miracle in the thirty-six hours since Saturday morning's sun looked upon the appalling devastation of Carmel's beloved Playhouse.  Furniture, rugs, pictures, properties, settings, costumes, make-up - every least item of production had to be found without delay and assembled on the state of the Sunset Auditorium... "Candlelight" and our community theatre shall not be extinguished." (5)

The show must go on, and it did.  Monday's show and the rest of the run was held at the Sunset Auditorium. 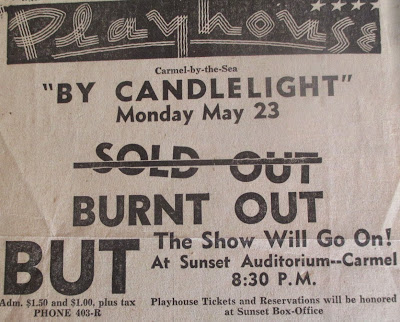 Rising from the Ashes

"O that the Golden Bough might now appear,
to guide us from this dark wood."
Virgil's Aeneid, Book VI (6)

After the fire in 1949 the entire Peninsula called for the restoration of the Playhouse. For the third time the Golden Bough would be built.  This time it would be by a corporation, with Kuster holding common stock and preferred stock subscribed to 400 local families.

The third Golden Bough would have an auditorium seating for 299, a proscenium stage, and a lower level theater with arena seating for 150.

In October 1952, at the age of 74, Edward Kuster once again raised the curtain on his Golden Bough Playhouse on the west side of Monte Verde between 8th and 9th.

After thirty-five years acting and directing community Theatre (with a capital "T" please) Kuster's last appearance in a local drama was May of 1956 when he appeared as Grandpere in "The Happy Time." 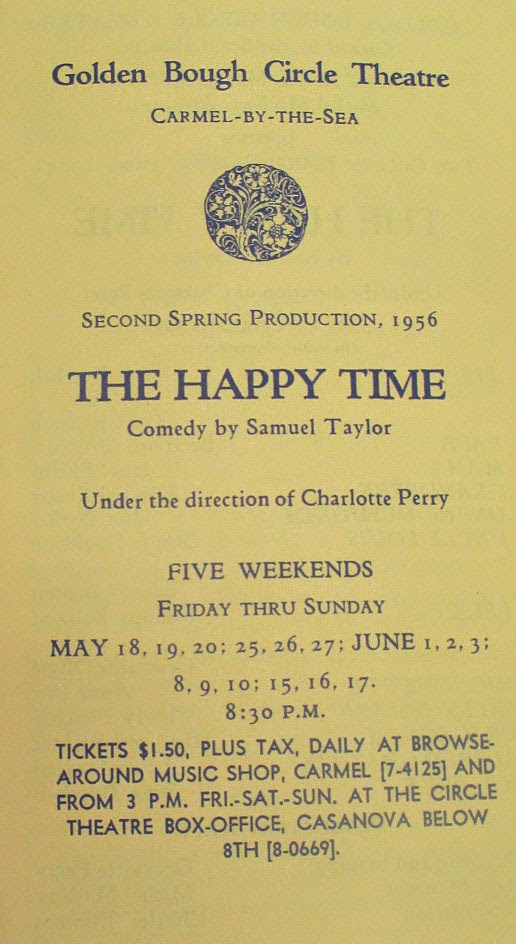 In 1957 Kuster resigned from the Board of the Golden Bough Playhouse it was time to "retire," travel and just be.  Over the thirty-five years he devoted to Carmel Community Theatre, he personally directed 85 plays and acted more that 50 roles. 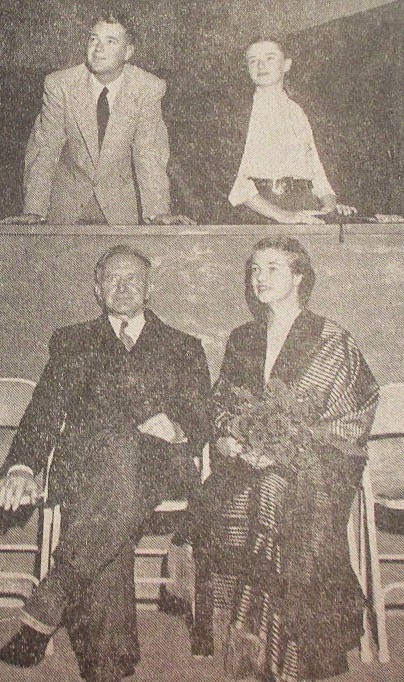