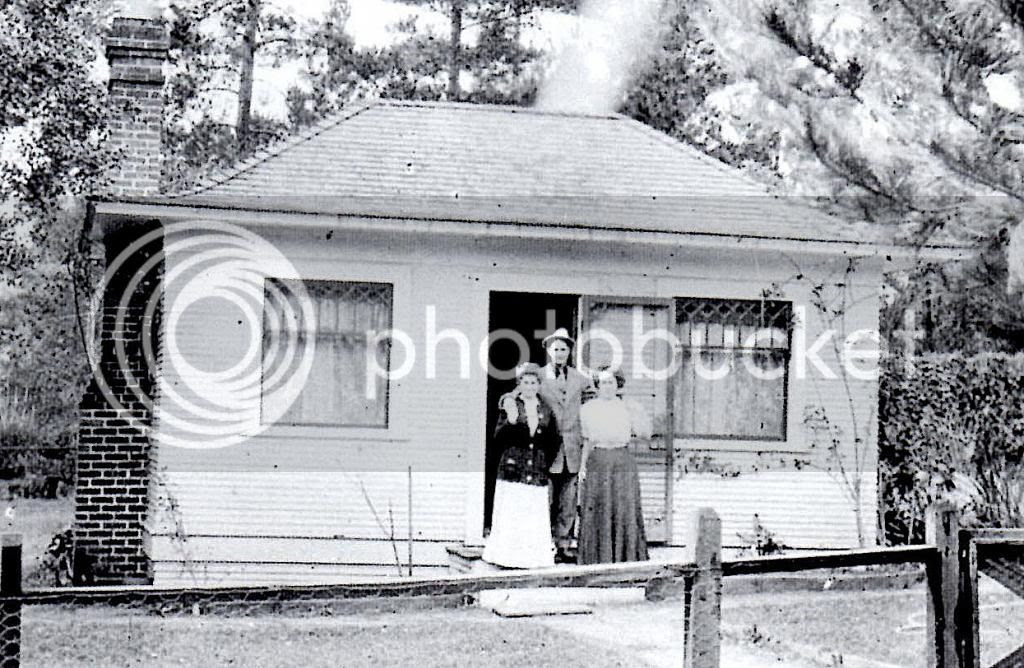 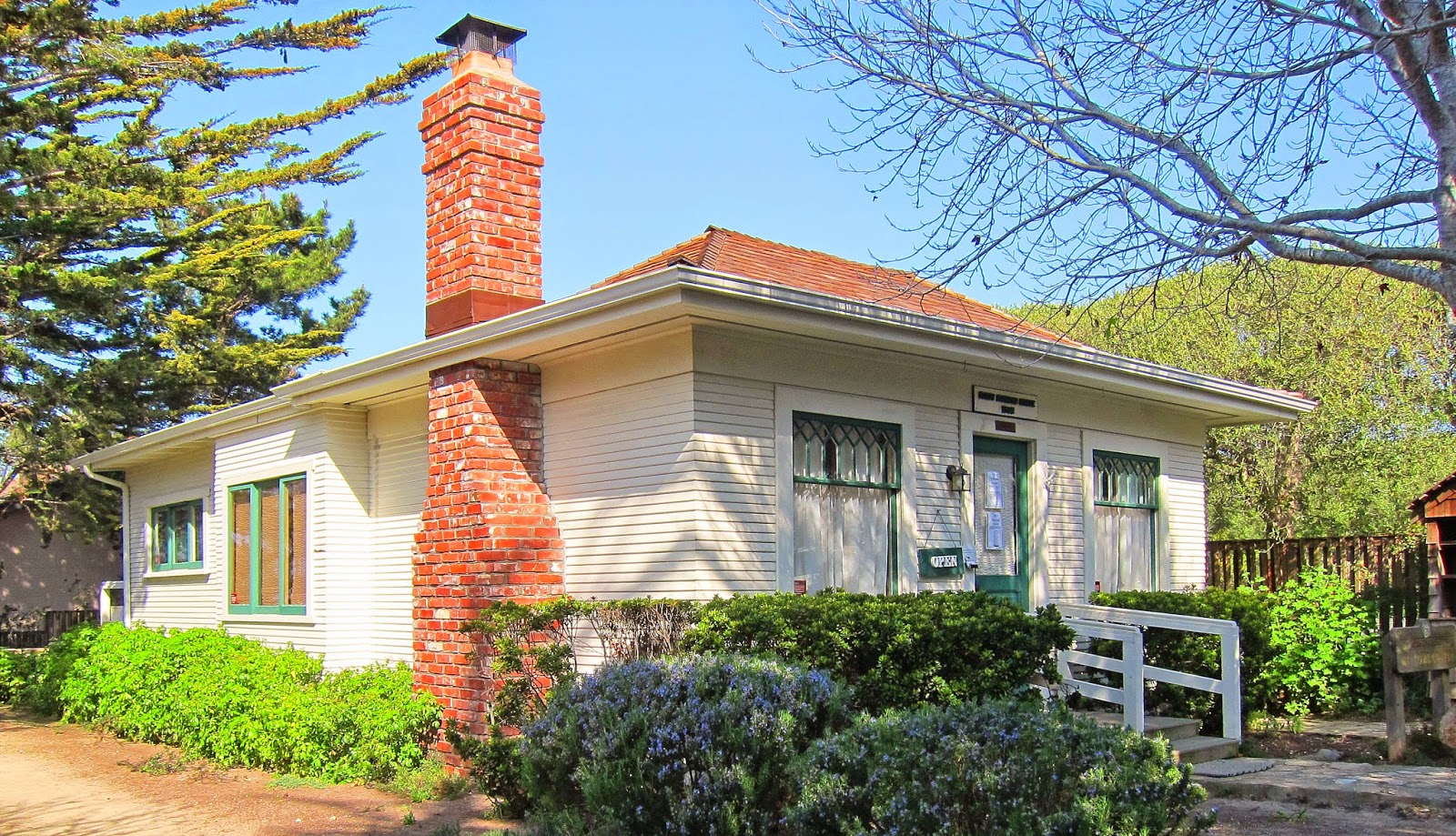 The $30 ticket included a Carmel Heritage Society commemorative wine glass which I frequently used throughout the afternoon, as local wineries and restaurants provided lite bites and wine tasting at each of the inns on the tour.

The Inns of Distinction Tour is one of my favorite Carmel events.  Not only do I get to see inside the rooms of these charming inns during one of the more festive times of the year, I also enjoy the treats and tastings offered at each venue.  And I always come home with gift cards to restaurants and wine bars that far exceed the purchase price of my ticket!!

The word on this has apparently gotten out, because this year Carmel Heritage Society had their largest number of tickets sold to date for this event!

Here are the video highlights of the tour.


Now come along while I review the history of the inns and some of the highlights of this year’s tour. 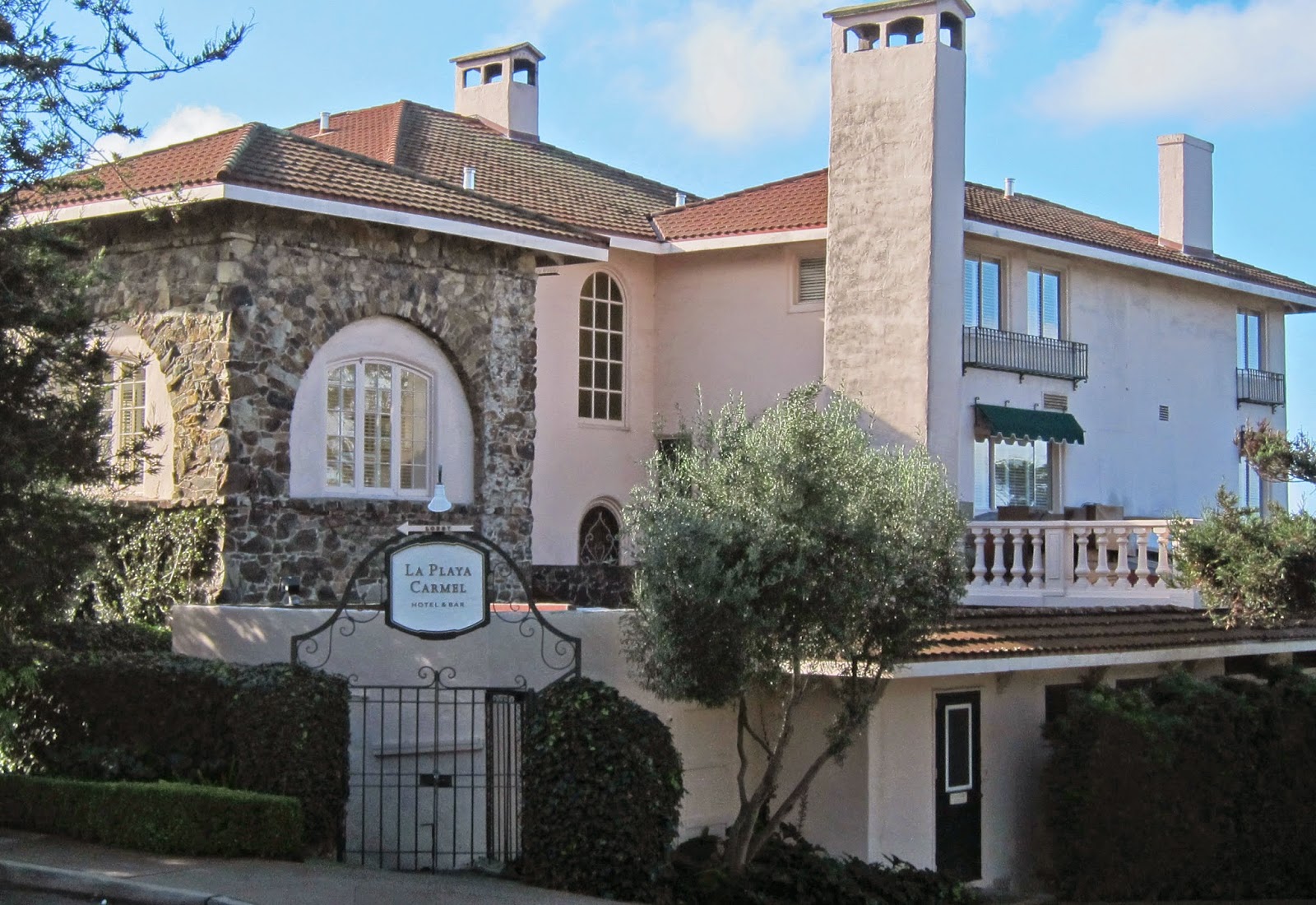 The La Playa Carmel, known as the Grand Dame of Carmel hotels has ties to some famous Carmelites. 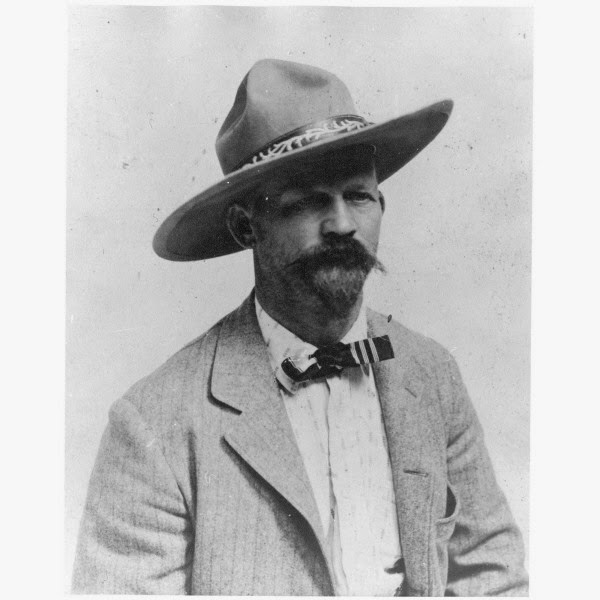 Christian Jorgensen was born in what is now Oslo, Norway in 1860.  His family immigrated to San Francisco in 1874 where he was "discovered" by Virgil Williams at the age of 14 as he sketched a San Francisco cityscape.

Jorgensen became the first person to receive a scholarship to the California School of Fine Arts.  After graduation he became an instructor, and it would be in one of his sketch classes that he would met his future wife, Angela Ghirardelli (as in chocolate).

Christian and Angela married in 1883.  They had two children and spent many years traveling and painting. Christian was fascinated by the California Missions and captured all 21 of them on canvas. 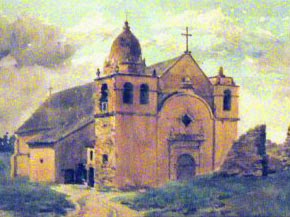 The Jorgenson's came to Carmel-by-the-Sea in 1905 and built their home/studio on the southwest corner of Camino Real and Eighth Avenue which was completed in 1907.


In 1909 Alida Ghirardelli, daughter of Angela's favorite brother, drowned in Carmel Bay. Others have reported that it was Angela who drowned but it was not.  Angela outlived her husband Christopher by six months, dying in January of 1936.


In 1911 the Jorgenson's leased some of the rooms of their home to Agnes Signor for use as a boarding house. Signor had come to Carmel-by-the-Sea after the 1906 earthquake destroyed the three hotels she was managing in San Francisco.  At the time she opened the boarding house at the Jorgenson's, she was also the manager of the Carmel Bathhouse located at the foot of Ocean Avenue.

By 1916 the Jorgenson's sold their property to Signor who desired to make her boarding house into a fashionable hotel.  But she needed help. So she sent for her two nephews, Harrison and Fredrick Godwin.

The Godwin brothers arrived, quickly learned the hotel business, added twenty rooms to the property and opened the La Playa Hotel in 1920.

Three years later Agnes Signor died, and the Godwin brothers became the new owners.  In December of 1924 a devastating fire destroyed most of the La Playa Hotel.

Undeterred, the Godwin brothers spent $34,500 to restore the La Playa Hotel, adding an additional thirty guest rooms. They reopened in 1925 with rooms rates starting at $2.50.

In 1930 Fred Godwin bought out his brother Harrison's share in the La Playa Hotel and would become the sole owner until 1963. Fred Godwin would also become mayor of Carmel-by-the-Sea from 1946 to 1950.

Since 1963 the ownership of the La Playa Hotel has changed hands a few times.  The last in 2011 when it was purchased by Classic Hotels and Resorts, renovated at the cost of $3.5 million, and reopened in August 2012 as the La Playa Carmel. 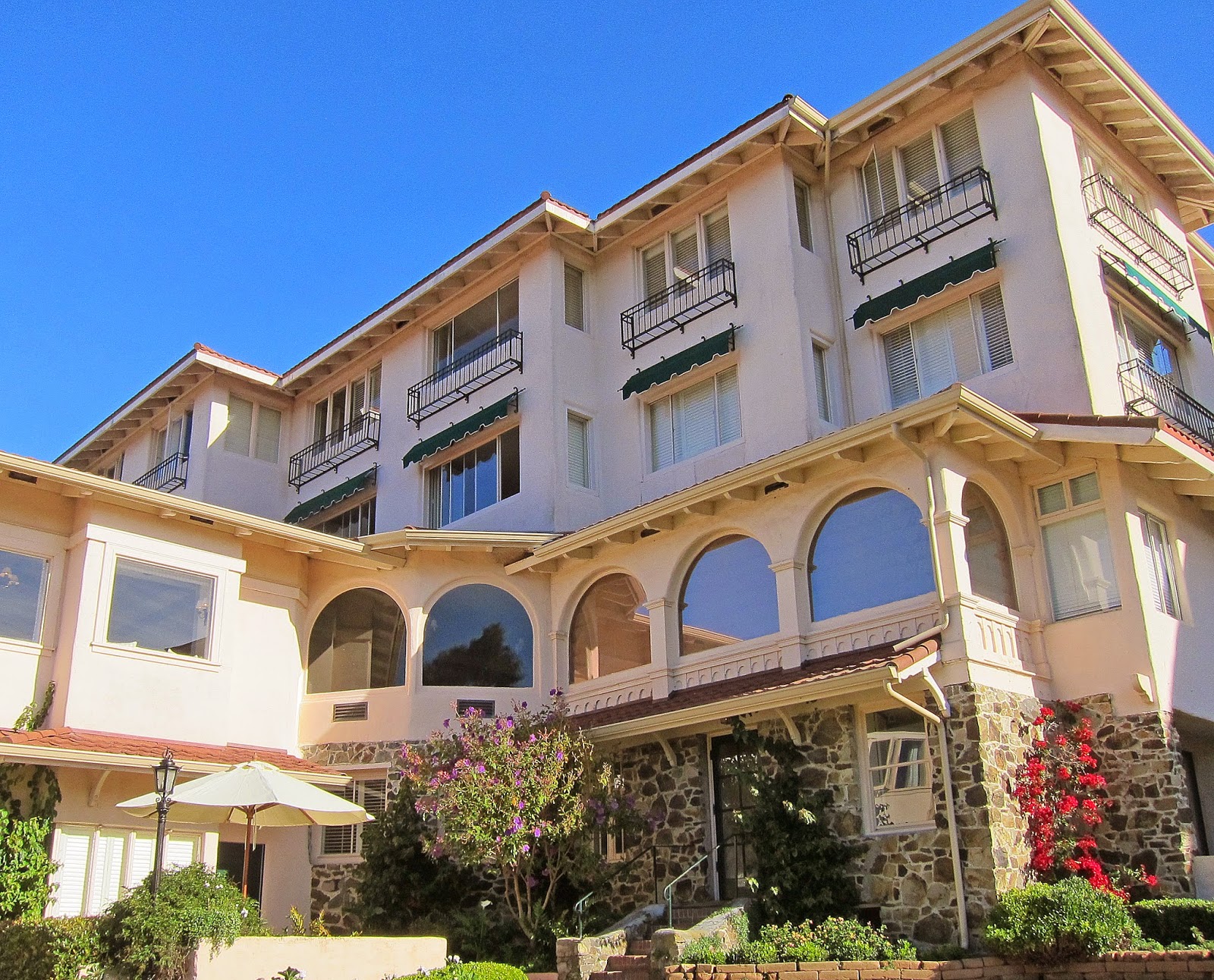 This is my third year touring the La Playa Carmel with the Carmel Heritage Society Inns of Distinction Tour.  And it never gets old.  I am mesmerized by the building and enchanted by its story.

Walking to the entrance one can still view the original quatrefoil window patterned after the Carmel Mission.

Jorgenson designed this window and master-mason Ben Turner, who came to what was then called Carmel City in 1896, built the window into the ground level of the stone tower. (look at the b/w pic above and you can glimpse the window on the left, in the base of the brick tower) 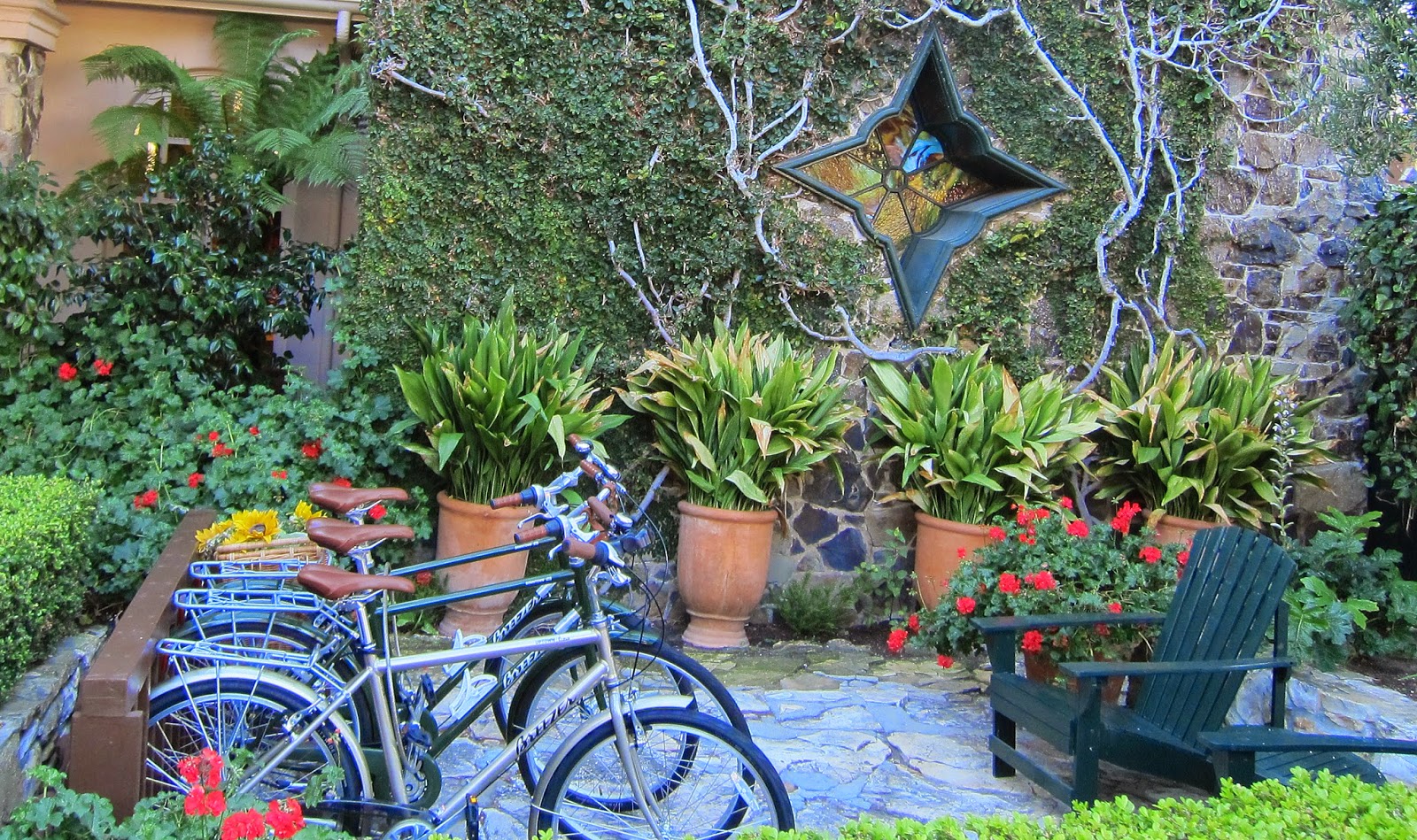 Pass through the lobby and
sitting room with cozy fire burning, 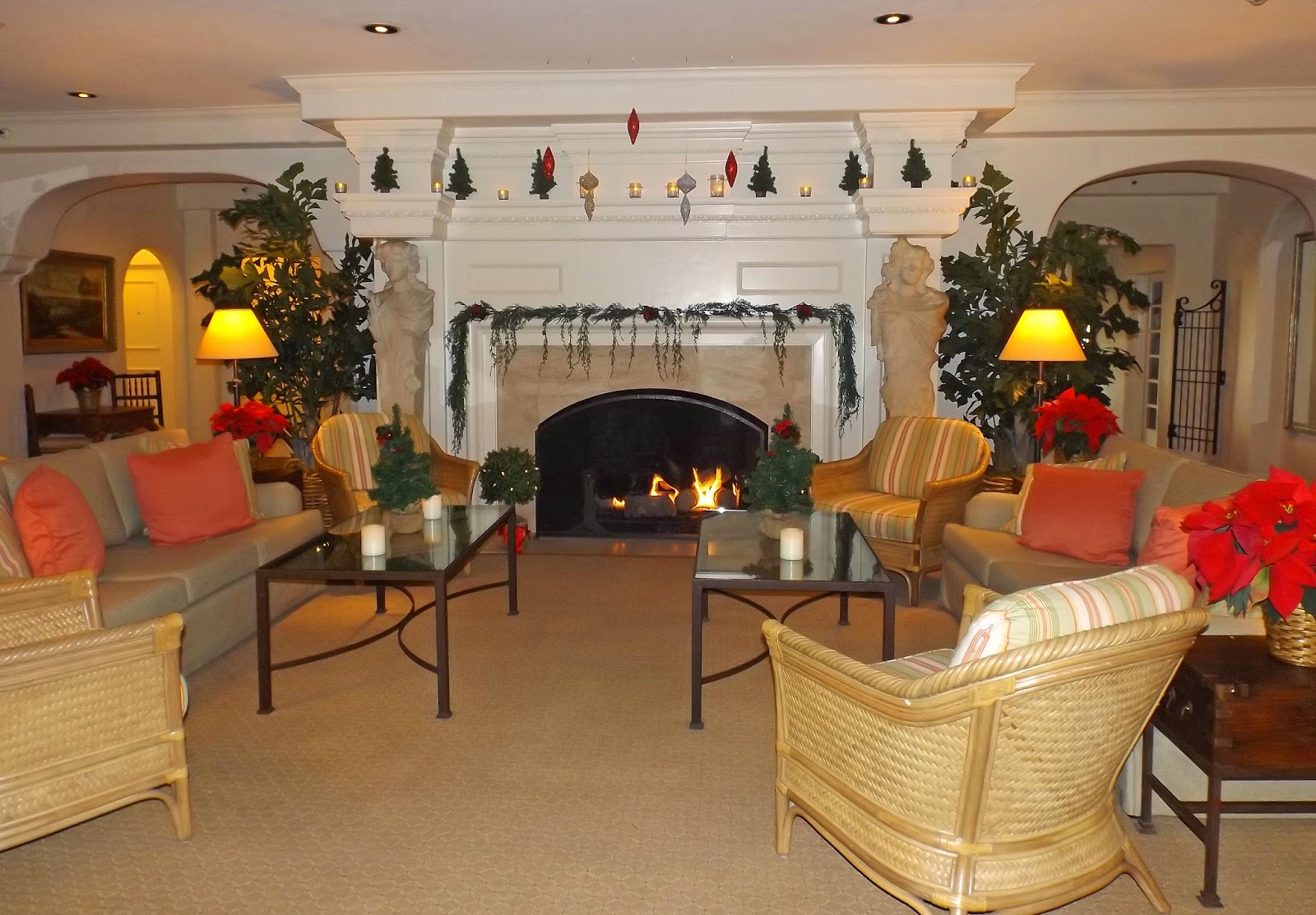 to the Library.  It is here that a complimentary breakfast buffet is served daily to the hotel guests. 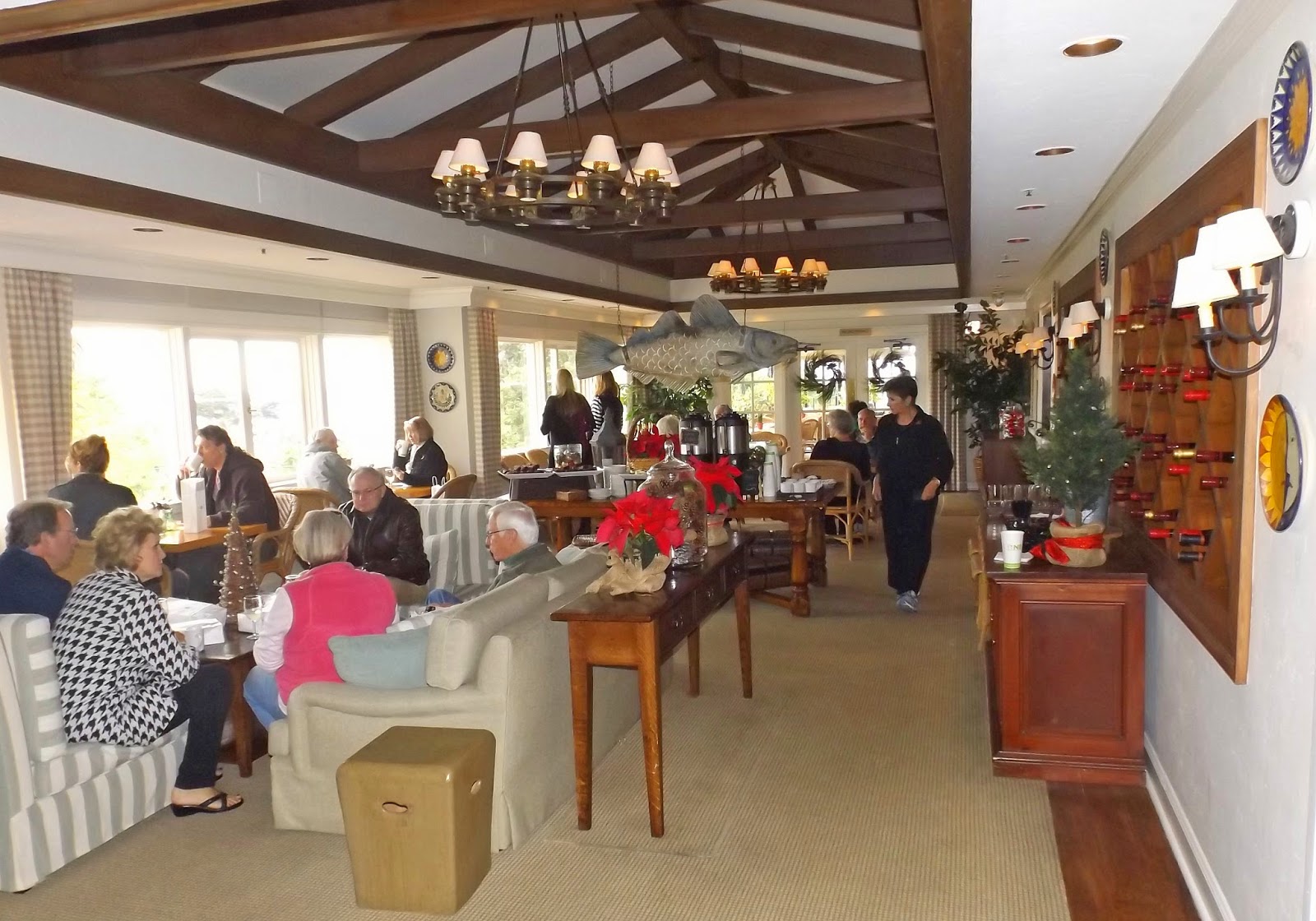 During the Inns of Distinction Tour, this is the gathering place to enjoy some delectable deserts fresh from the La Playa Carmel kitchen and 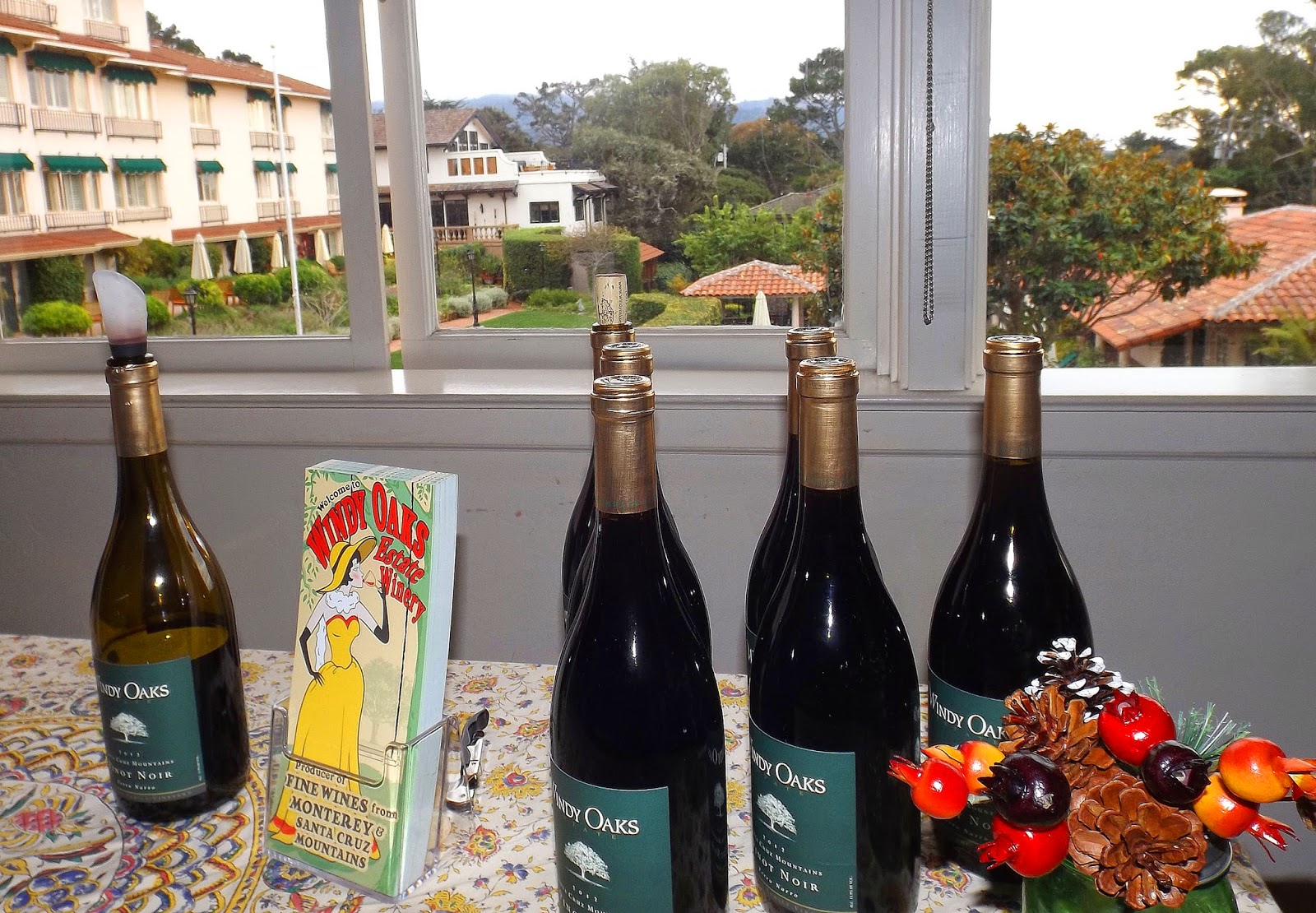 pair with a tasting of the 2013 Sauvignon Blanc from Windy Oaks Winery or their 2012 Estate Pinot.  Windy Oaks just opened a tasting room in the Su Vecino Courtyard off Lincoln between Fifth and Sixth. If anyone is counting, this would be the 19th wine bar in Carmel-by-the-Sea. 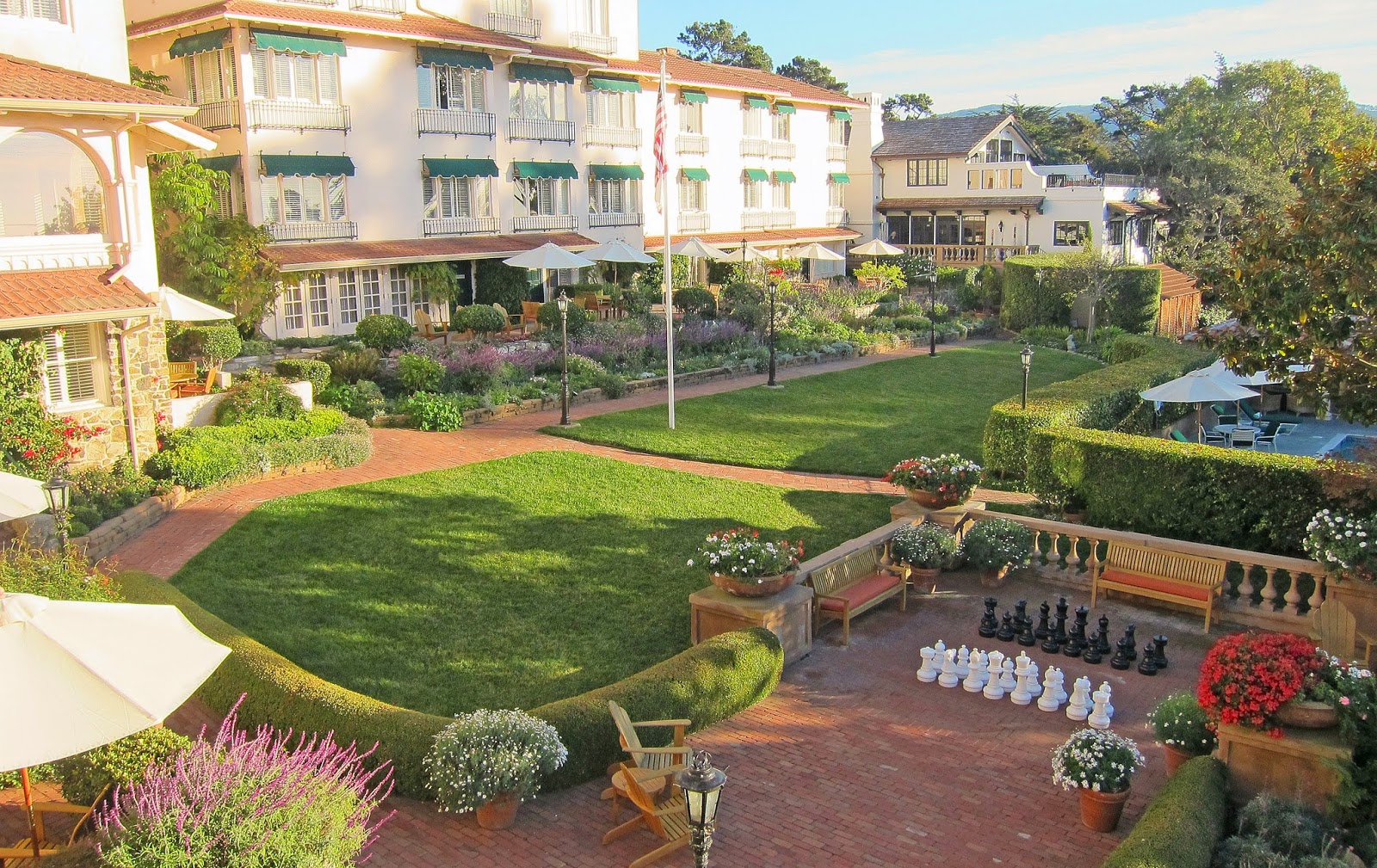 A short pause to enjoy the view of the garden below and it is time to get my peak inside an Ocean View King. 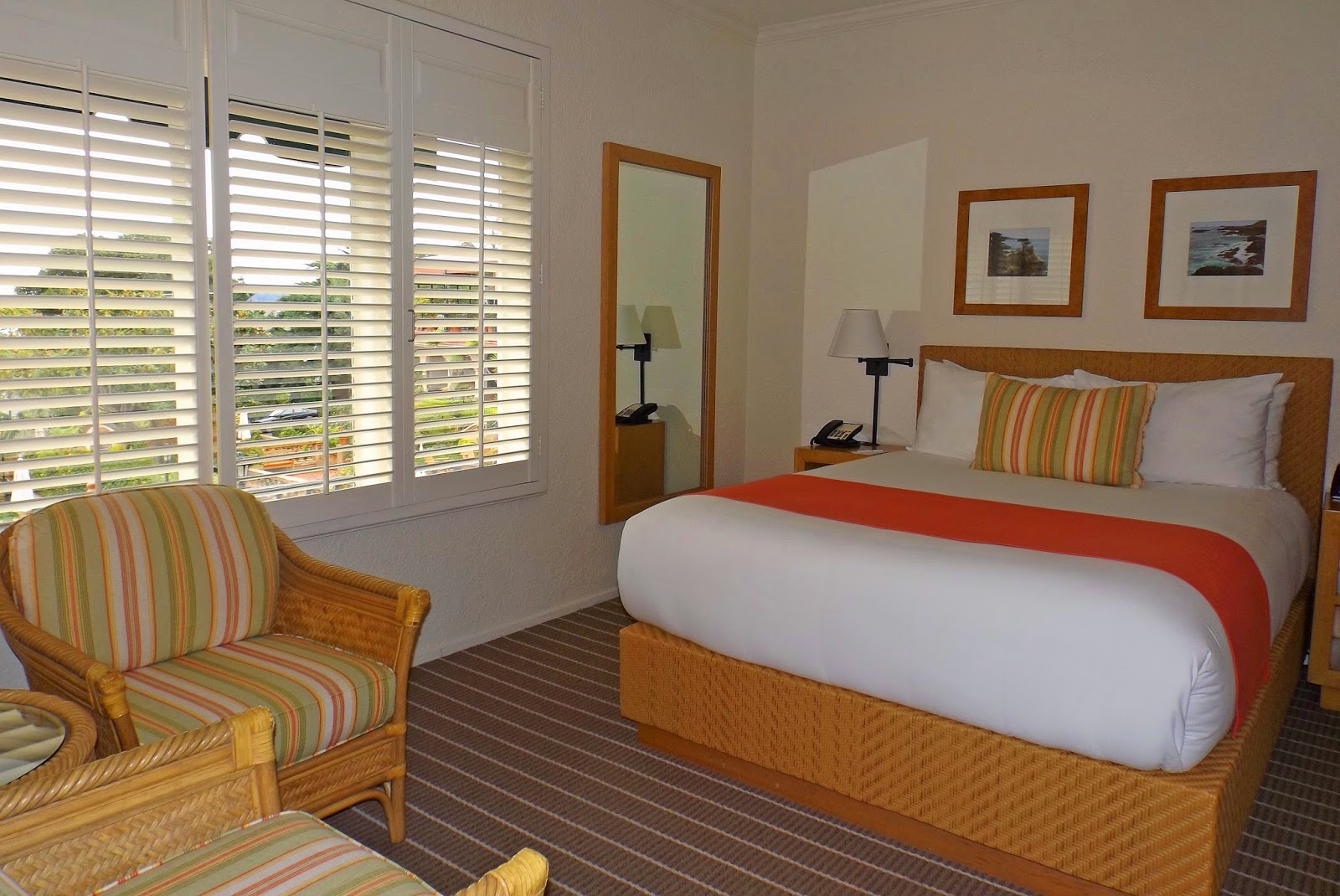 Spacious, simple and uncluttered with a delightful garden view and peak of the ocean through the plantation shutters. 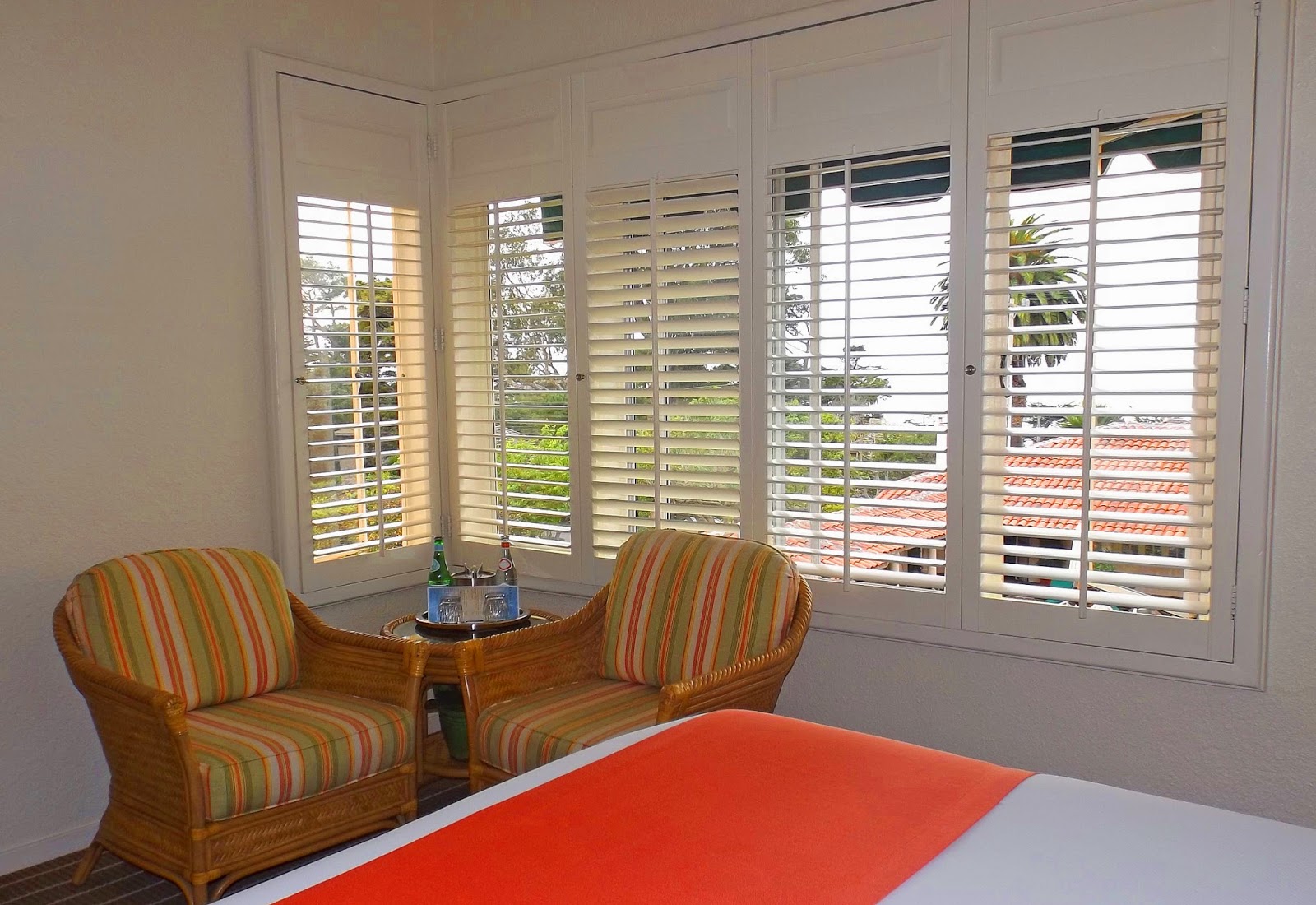