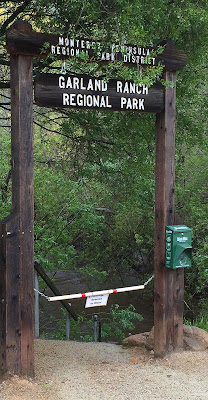 With just a few hours of clear skys Sunday afternoon between the latest series of the Pineapple Express, Mike took off on his bike and I took off on a hike.  Rumor had it that the waterfall at Garland was running after four years of drought. I wanted to make sure there was some truth to this rumor. 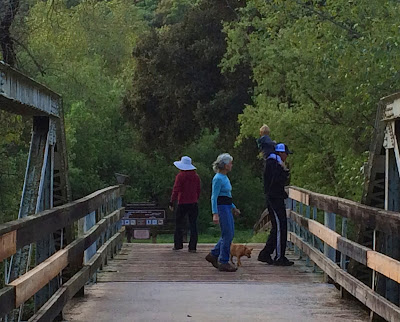 Well I wasn't alone.  By noon on Sunday the lower trails of Garland were streaming with hikers, mountain bikers, and dogs 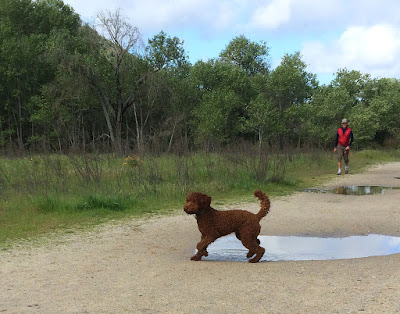 of all shapes and sizes jumping for joy to be out in the open. 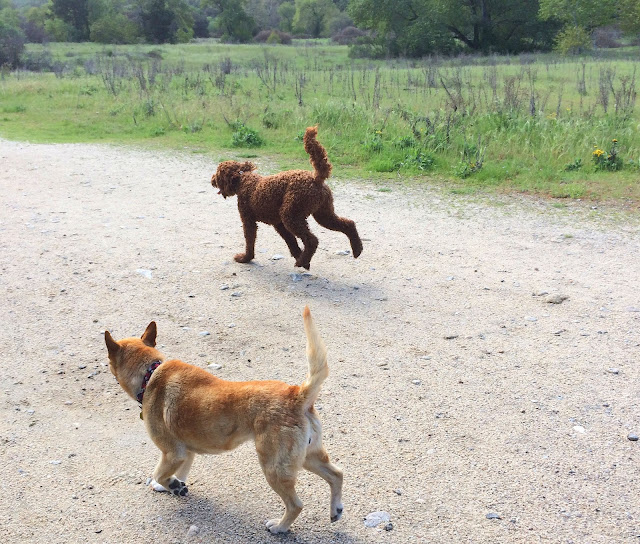 For the last four years I would cross the parking lot to the trail head at the Visitors Center by walking across the dry Carmel River bed.  Not today! Hallelujah - the temporary footbridge has been removed for the winter - Carmel River is flowing. This may also have had something to do with the removal of the San Clemente Dam last year. But whatever the cause the muddy water was a beautiful sight. 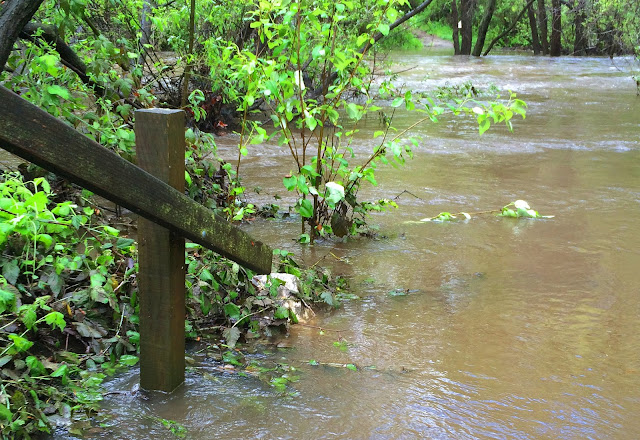 This mornings 3 mile hike is moderate in level with about 3 climbs totaling around 360 feet in elevation. 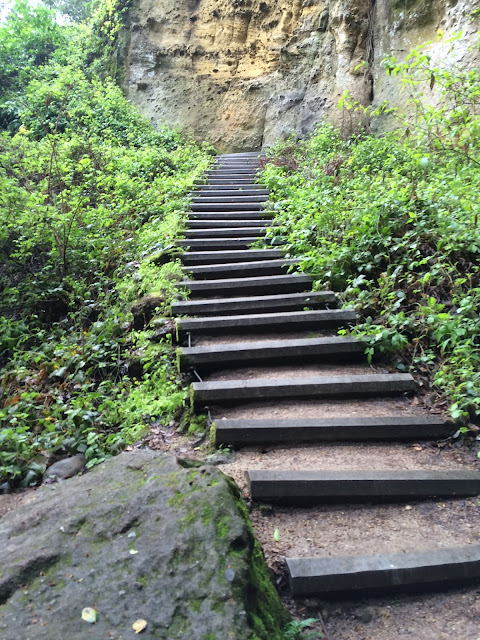 There are a number of sets of stairs cut into the side of the hill and a few areas where the path narrows to about 2 feet with a drop off into the canyon below. 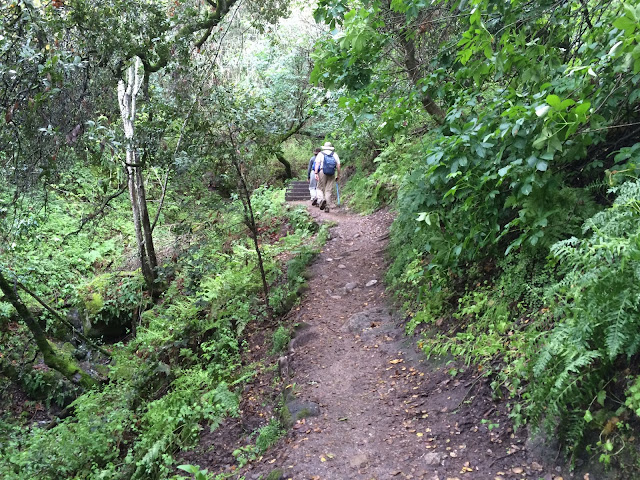 So keep that in mind when setting out on this hike.
From the Visitors Center head south following the
path toward Lupine Loop and Waterfall Trail. 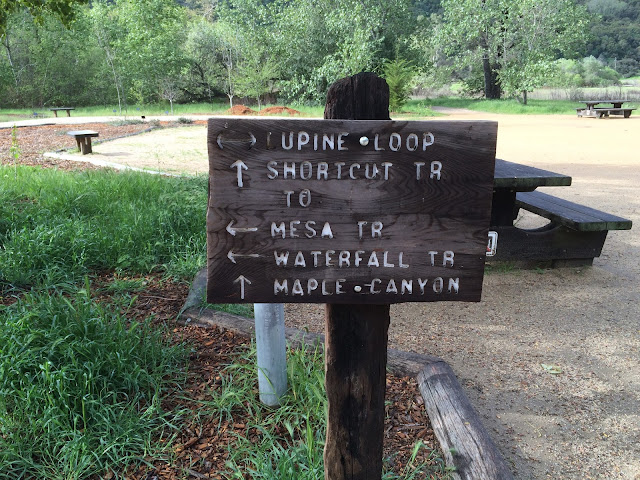 March is still early in the wildflower season so spotting new flowers takes a keen eye in the low meadow area. 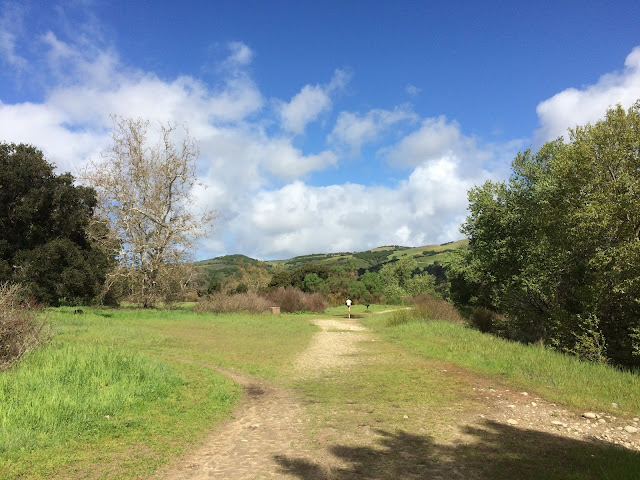 Lupines are few and far between right now but the tiny Filaree, both Red and White-stemmed were prevalent.  They just aren't as showy as the Lupine. 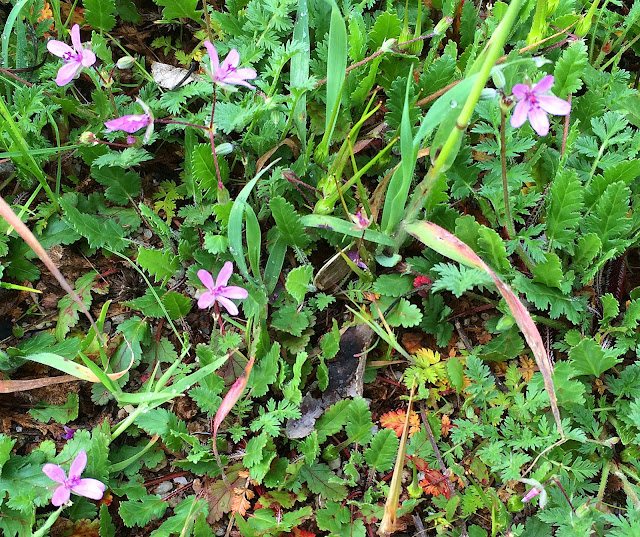 I turned right heading toward the hills following the Lupine Loop. I did manage to spot a patch of Fiesta Flowers 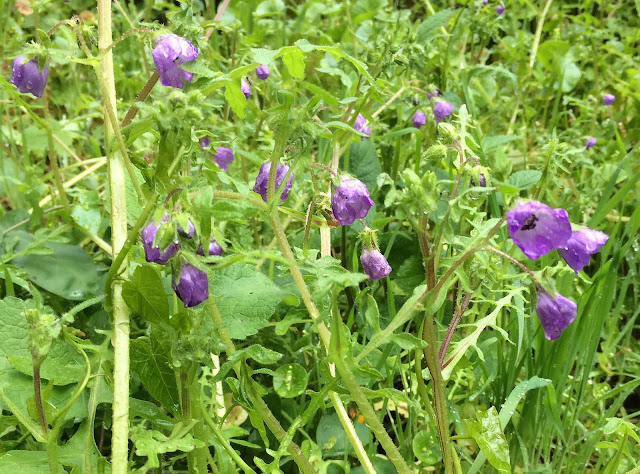 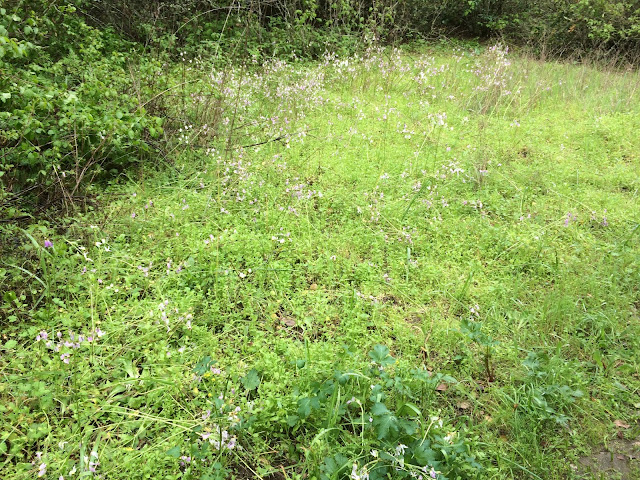 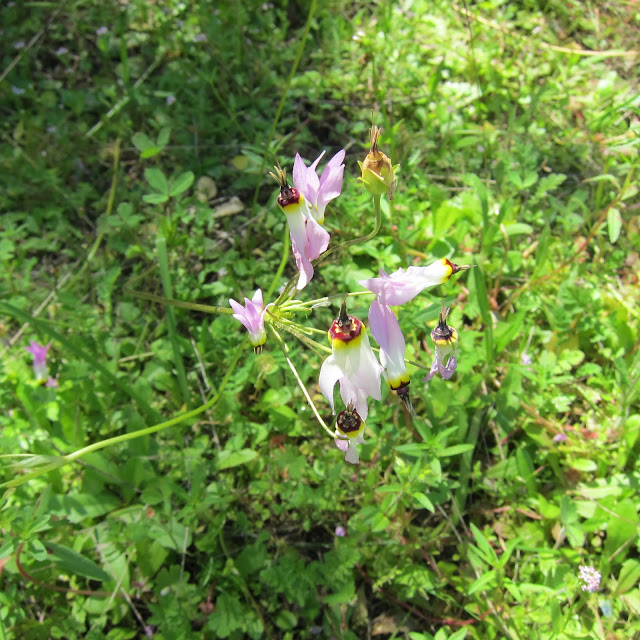 before taking a left at the fork toward Rumsen Grinding Rock. 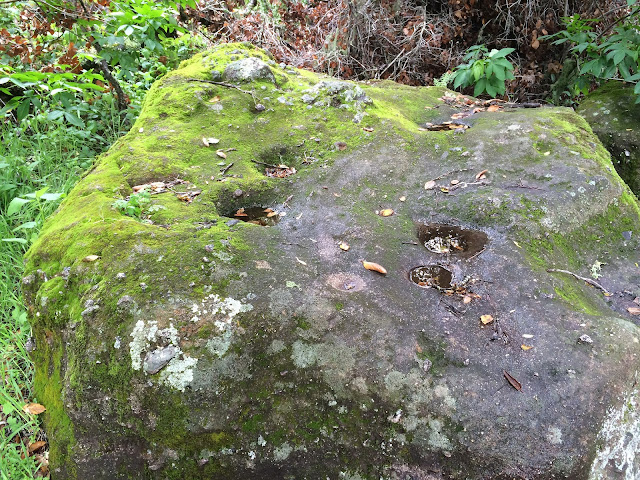 At this part of the hike, the path narrows, you are starting to make your climb to the waterfall. 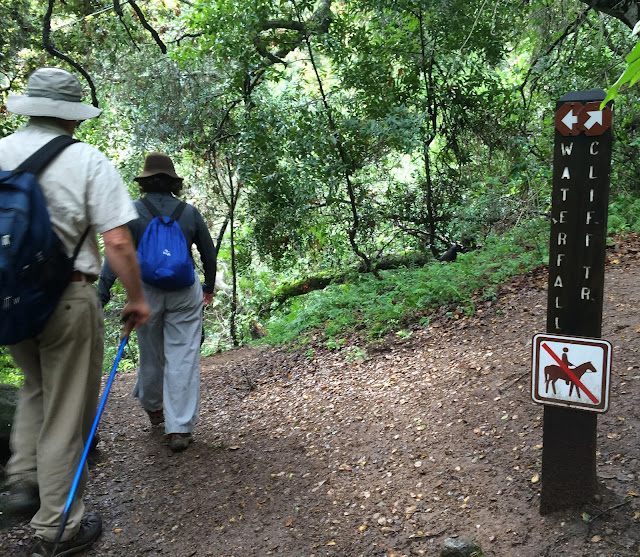 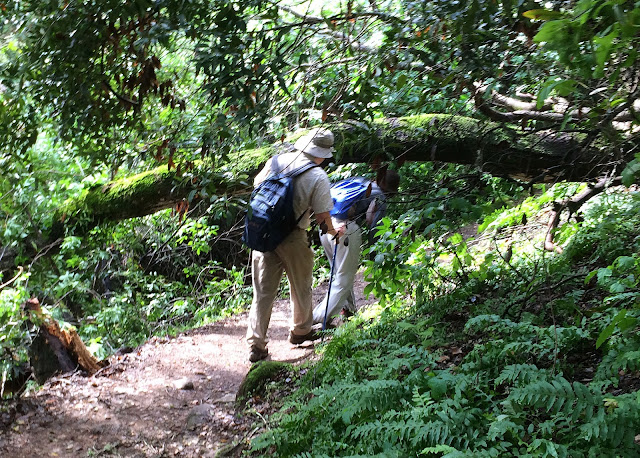 And the periodic crazy dog that comes out
of nowhere off lease running ever
so nimbly on the edge of the path. 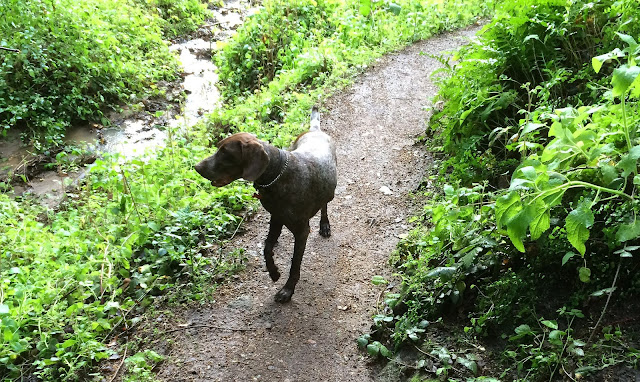 The Waterfall trail has a few treats for me,
a Giant Trillium, 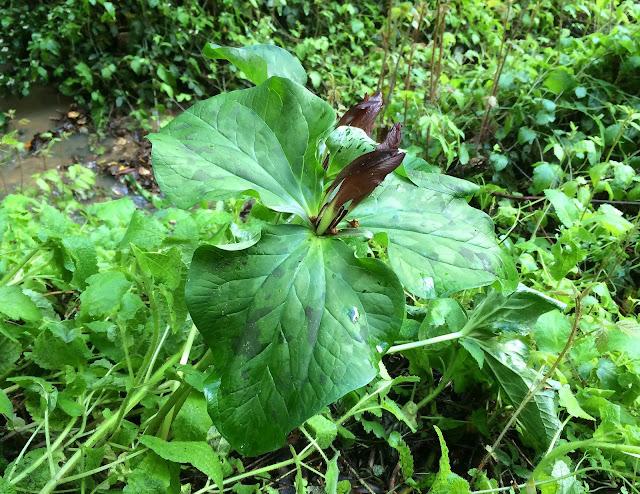 and Globe Lilly camouflaged
among the firms. 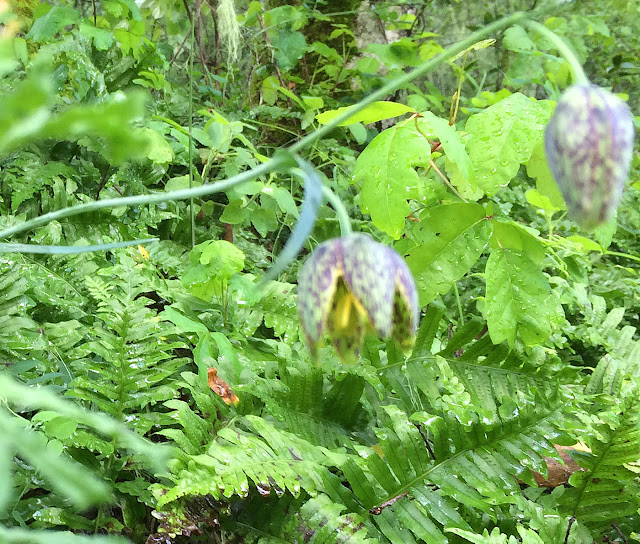 In the distance I can hear the waterfall.
I cross the footbridge, 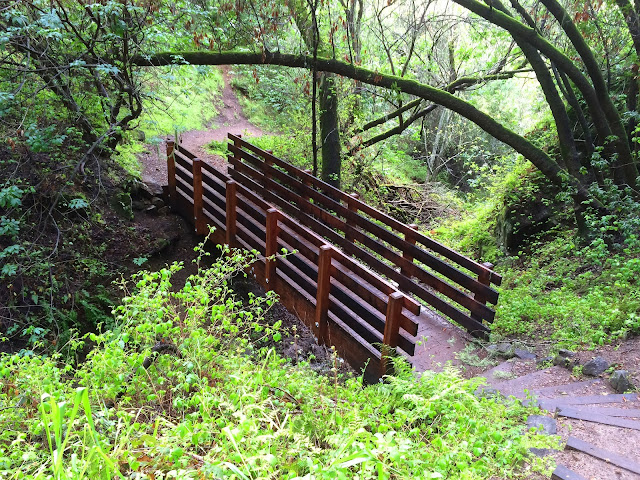 ascend a flight of stairs, 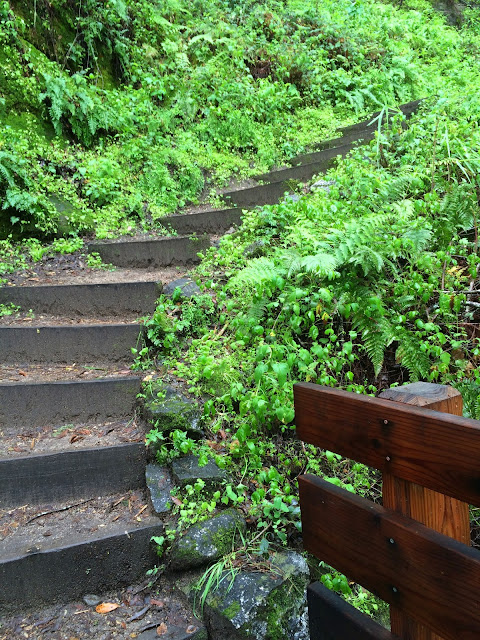 then what do my wandering eyes should appear but
the heretofore rumored waterfall. 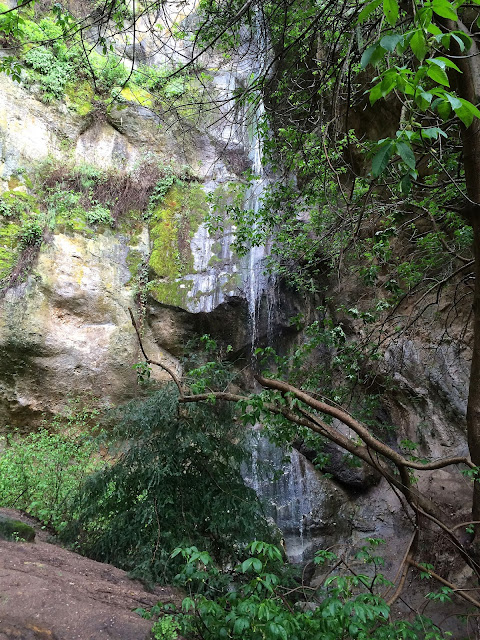 It is not quite Yosemite Falls, but it is our waterfall.  And having had this dry for four years, it is quite a sight.

This is normally a good turn around point but I decided to push further another half mile to a point in the Waterfall trail which offers a filtered view of the Carmel Valley below.

Happy with the opportunity to hike between the storms I decided to error on the side of caution and head back before the next rain came. 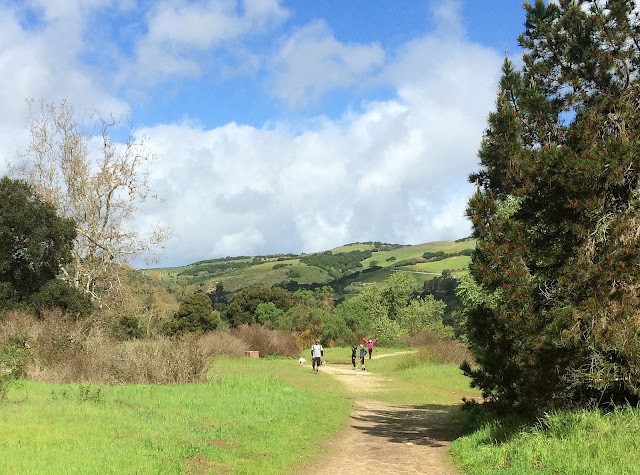 Until next time.  Happy Adventures!!!!