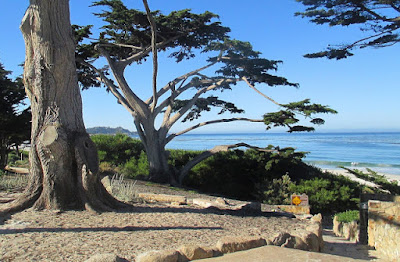 Those who visit our village may only have a few hours to spend in Carmel-by-the-Sea.  Some enjoy shopping, some love to eat, others enjoy a walk.  The Scenic Loop Walking Tour is a series of two blog posts.  They are a self-guided walking tour of what I believe feature three miles of natures most impressive beauty.  If time does not permit, this first part can be walked as 1 1/2 miles round trip - Just turn around at the new restrooms on Santa Lucia and Scenic where this blog ends.

So that you are not constrained by the two hour parking limit in town,  I suggest you park in the parking lot at the end of Ocean Avenue by Carmel Beach.  There is no time limit here on parking during the day.


There are three public restrooms along this walking tour. One at the beginning, base of Ocean Avenue, at the end of Part 1 at Santa Lucia and Scenic, and next to the parking lot at Carmel River Beach.

This walk is fairly level but weather conditions can be windy and cold.  A windbreaker or sweater is recommended, dark glasses, camera, and binoculars are useful. 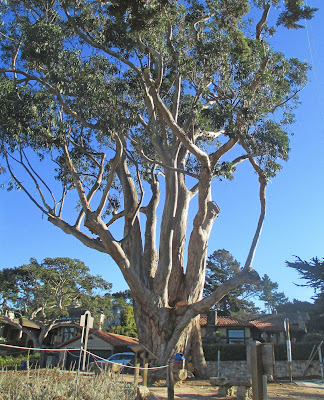 Start this walk at the Carmel North Dunes Habitat Restoration Site (northwest corner of Ocean and San Antonio* next to the Carmel Beach parking lot) under one of Carmel's heritage trees, a Blue Gum Eucalyptus.

This tree, the largest in the Village, (the trunk measures over 22 feet around) just underwent a haircut in readiness for (hopefully) the impending El Nino.  This Eucalyptus is thought to have been planted in the 1850's. 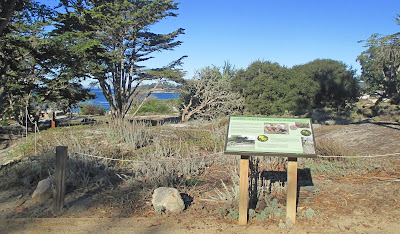 Before we continue on to Carmel Beach take a moment to look beyond the ropes at the Habitat Restoration project. The Carmel-by-the-Sea Garden Club began this project in 2009 to "correct a century of  human disturbance which had greatly affected the natural state of the dunes."

The non-native and invasive ice plant was removed.  Though the battle continues - as ice plant pushes through the native Pacific Dune Grass shown below. 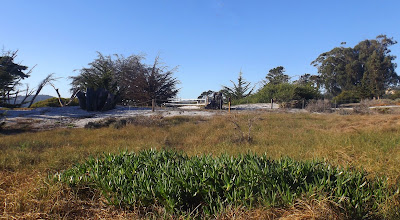 At times during the spring, summer, and fall we now see glimpses of native plants, delicate Pink, 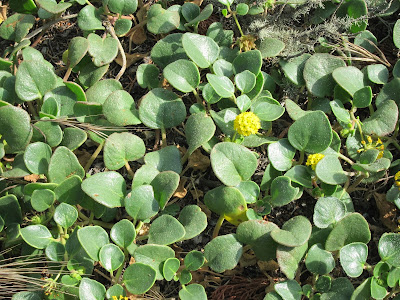 and the Dune Sagewort. 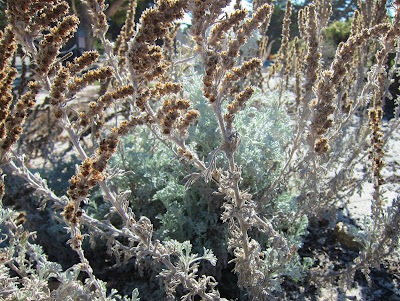 Continue your walk down Ocean Avenue toward the ocean. After the restrooms, follow the boardwalk past the Ghost Tree (a dead Monterey Cypress planted early in the 1900's) 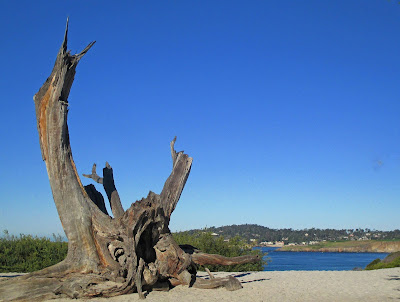 to the Carmel Beach Overlook.

Take in the unobstructed view of Pebble Beach to the north (shown below) and south to Point Lobos. 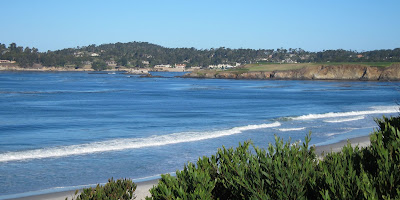 Walk, back tracking to the parking lot and cross the street following the brick path to the south side of Ocean Avenue. 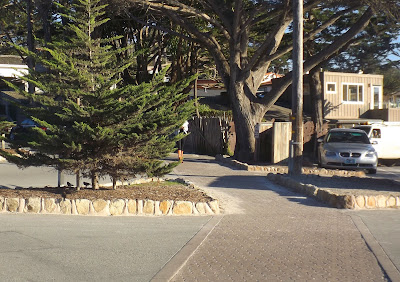 Here you will find a unique rusted steel sculpture attached to the fence.

This is actually the second sculpture at this location, the first one designed by Mark Periman was damaged over the years and replaced in 2005 with this one by artist Michael Largent.
For fellow Geocachers, (I know you are out there) this is the site of one of our numerous caches in town, called The End of Ocean Avenue.

Continue one block back toward town to Scenic Drive.  On the southeast corner is a large Spanish style home.

In 1937 this two story home was built for the President of Zellerbach Paper Company, Harold Lionel Zellerbach. Harold's grandfather, Anthony Zellerbach founded the paper company in 1868. 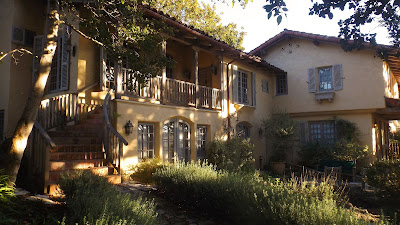 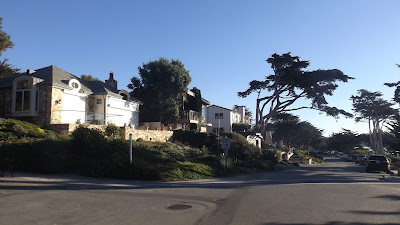 It is here you will start the walk along the Scenic Bluff Pathway which parallels Scenic Road on the bluffs above Carmel Beach.

Just in case you are interested, here is a little background on how the Scenic Bluff Pathway came to be. 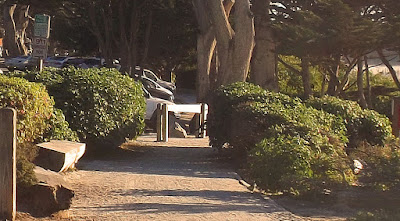 In 1983, Mayor Charlotte Townsend formed the Beach Task Force to clean up the damage.  Phase I completed in 1985, consisted of beach clean-up, installation of long-term stabilization of the bluffs, and a new storm drain system.  The cost, $816,283. 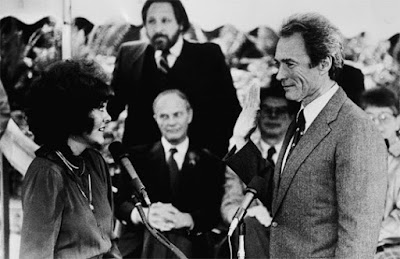 In January 1988, under Mayor Clint Eastwood, City Council approved the work for Phase II which would include a decomposed granite bluff-top walkway beginning at Eighth Avenue and ending at Santa Lucia, reconstruction of five stairways, addition of handicapped ramps, benches, landscaping and irrigation.  The cost, $825,000. 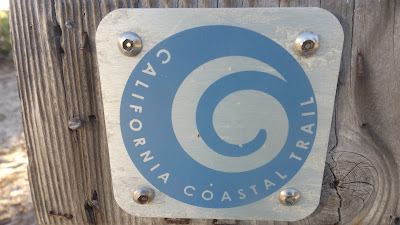 Mayor Jean Grace, who had worked on the Beach Task Force before becoming mayor, cut the ribbon for the walkway in June 1988.  It had taken five years but Scenic Bluff Walkway was finally open. This pathway, marked by the blue and silver ocean sign, is a small section of the 1,200 mile California Coastal Trail from Oregon to Mexico. 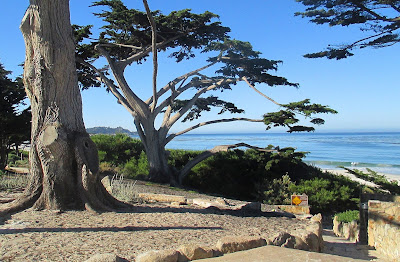 While  you enjoy the beauty of this first half mile, here are a few things to keep an eye out for.

If you are able to take your eyes off the breathtaking beauty of Carmel Beach, the houses that line Scenic are quite stunning themselves. We have many styles, no tract housing here, and some have had famous residents. 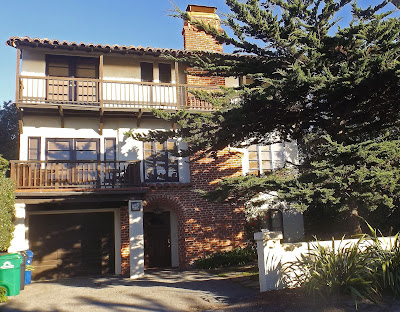 The three story Spanish Eclectic style home, with the massive brick chimney named Anything Goes**, was the home of Richard Cox.

Richard was born in Carmel in 1930, his father Elmer was a WWI veteran, his mother the silent film actress Ruth Powell. Richard majored in Drama at Stanford and took the stage name Dick Sargent. For those of my generation we remember Richard as Darrin Stephens from the TV show Bewitched.

Just after the Ninth Avenue pass-through to San Antonio Avenue is Las Ondas, a three story house with tile roof. Built in 1933, this was the home of former Carmel mayor, Clint Eastwood during the 1980's and 90's.  The name Las Ondas is visible on the gate on San Antonio Street which you will pass on Part 2 of the Scenic Loop Walking Tour. 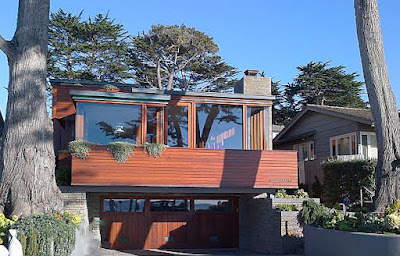 In the next block (between Ninth and Tenth Avenues) there is a proliferation of mid-century modern homes.  This style has grown on me over the years.  Ad Tearman a 1,950 square foot Japanese-style two-story wood home was featured in the January 2011 Architectural Digest.  Here is a slide show of the interior.

Between Twelfth and Thirteenth look for the white stucco cottage with tile roof named Periwinkle and Sea Urchin. They were originally built in 1915 as two fisherman's huts. Between 1930 and 1981, five different additions and renovations were made to the dwellings.  My mother told me stories of visiting them in the 1930's. I took the picture below in the 1990's when the homes were still divided as two separate units. 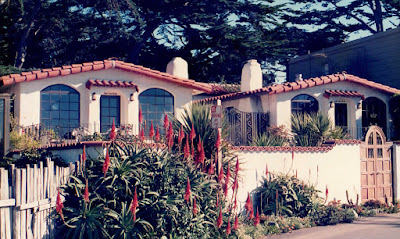 In 2000 Periwinkle and Sea Urchin were united as one by a hall. You can see this in the picture below. 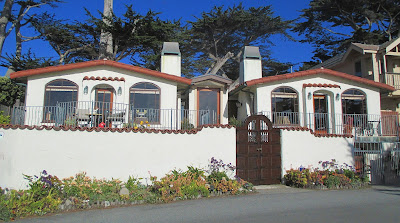 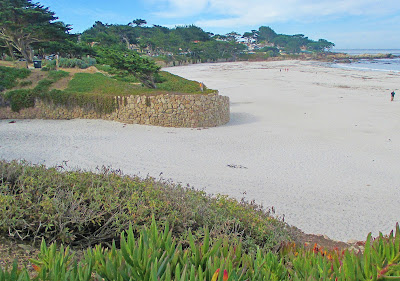 Named after the MacGowan - Cooke sisters who lived in the large Tudor style residence two blocks east of the cove on Thirteenth.

Alice MacGowan and Grace MacGowan Cooke came to Carmel in 1908, prior to that they lived in Helicon Hall, in Englewood, New Jersey.  Helicon Hall was a social experiment in socialist living designed by Upton Sinclair which burnt down five months after its inception.

After the failed experiment, Upton Sinclair came to Carmel, and the MacGowan sisters followed.  They purchased the large home, which was built in 1905, on the bluff above the cove.  At the time, it was the only house in the area. In Part 2 of this walking tour we will have a chance to see their house. But for now we continue south on the Scenic Bluff Walkway to Santa Lucia and Carmel's newest public restroom. 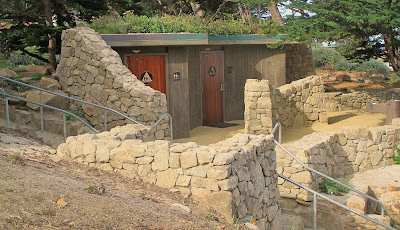 As with everything in Carmel, things take time.  Our new restrooms began life in 1991 as a suggestion by the 2016 Centennial Committee. Twenty-three years after the suggestion, in December of 2014 they opened to the public. 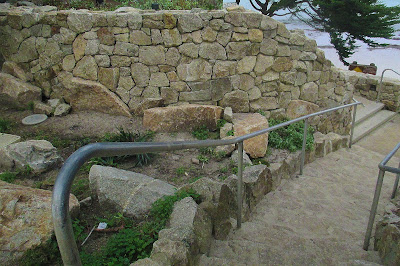 Built to blend in with the architecture and geography of Scenic Road they are hardly visible from the beach level or Street level. Cost to the village $595,000.

This is where we leave off Part 1 of the Scenic Loop Walking Tour. Part 2 will loop around Carmel Point to Carmel River Beach and back to the Carmel Beach parking lot via San Antonio Avenue.


Thanks for visiting.  Happy Adventures! 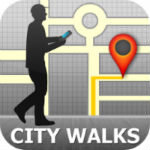 *The App is free, though a small fee will apply to activate some enhanced features.


All photography by L. A. Momboisse unless listed below:
Black and white photo of Mayor Eastwood's swearing in, from Carmel Magazine, Spring/Summer 2012.

Posted by Adventures of A Home Town Tourist at 9:48:00 AM