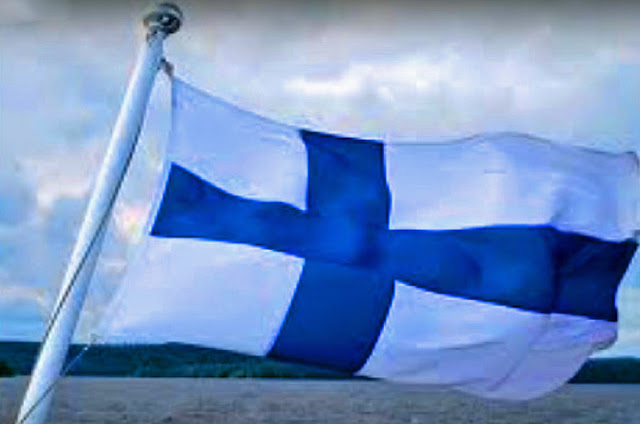 We arrived in Helsinki with unusually perfect weather, clear blue sky and a warm gentle breeze.

The Port of Helsinki is very busy with seven ferry companies and numerous cruise lines vying for two harbors with eight quays. Ships line up early waiting for docking instructions.  Tugs, dredges and barges work at their respective tasks around our ship. 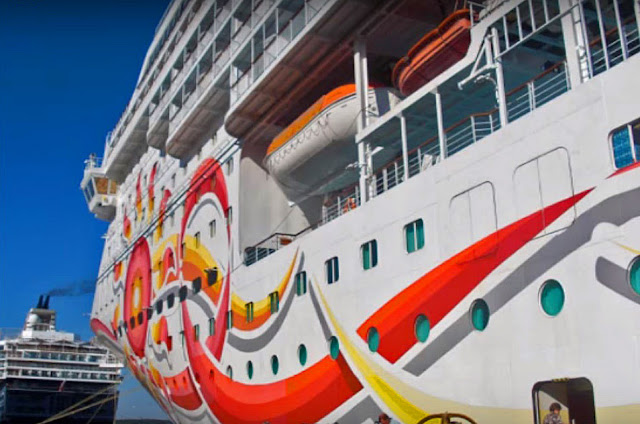 Our first impression of Helsinki, it is full of birds; loud, wonderful, swooping, graceful, hungry, birds. Though tempting it maybe, we are warned not to enter into any interaction with these creatures - killjoy!

With only eight hours on shore, we had "Googled" directions to town from each of the eight quays.  Okay, I'm obsessed.  Today Norwegian Sun docked at quay LHB Hernsesaari. Always a good idea to know where your ship is docked, just in case there is a frantic taxi ride to meet the all important all aboard time.

Setting off confident after 20 hours of sleep we were looking for a street called Hernematalankatu/Ärtholmsstranden, then turn right at Eiranranta/Eirastranden, and left at Docksgatan/Telakkakatu to Tram.  Our plan was to first take the 3B tram around the city proper to understand the layout of Helsinki.

Finland was part of Sweden until 1800, consequently every street sign in Helsinki is written in Swedish and Finnish.  This makes for very looooooooong street signs.  The two names don't even look like each other, i.e. start with the same letter or similar in sound. 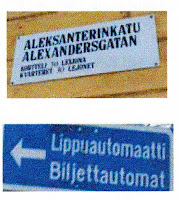 After making it all the way to Docksgatan/Telakkakatu, we lost our bearings.  A very kind English speaking Finn noticed our puzzled looks and asked if he could help.  He knew exactly where to catch the 3B Tram, and was happy to walk us there.  We caught the tram at Båtsmansgatan/Pursimiehenkatu. 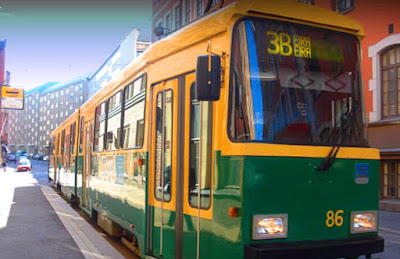 For 6.80 Euros (June 2011) each we had full day passes on the public tram system.  The T3 line makes a figure eight through the city of Helsinki, intersecting at the main train station, passing every sight we wanted to see or eventually visit.

After one hour we exited the tram at Sammonkatu and walked to the Temppeliaukio Church (Lutheran).  It is also called the Church of the Rock because it was blasted out of solid granite and is topped with a copper dome.  We almost walked right past it as the church blends in completely with its surroundings.

Adjusting to the street names a bit better, we quickly found the National Museum of Finland.  Unfortunately it did not open until 11AM.  We were too early and did not have the time to come back later.  Would have enjoyed touring this museum, which houses the history of Finland from "Prehistory to Present."

Noticeably missing from the streets of Helsinki, graffiti and litter!

Most of the streets are cobbled with a mixture of old and new architecture. 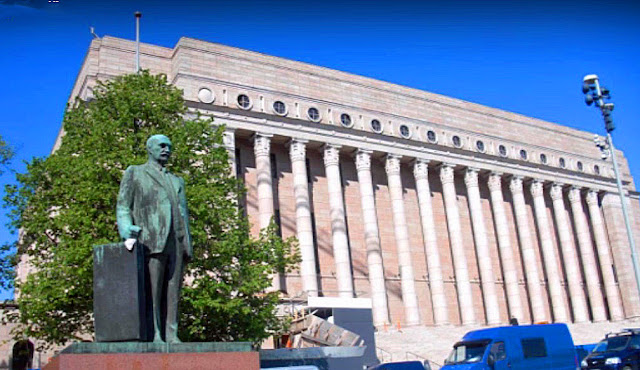 A wee bit of Finnish history:  Carl Mannerheim was born in a Finnish territory of Imperial Russia. He made his career in the Russian Army, raising to a General.  When Finland declared its independence from Russia, after the Bolshevik revolution of 1917, Mannerheim went with Finland.

Newly liberated Finland was thrust into a civil war one side favoring socialism (The Reds) the other capitalism (The Whites).  Mannerheim was appointed military chief of The Whites, and led capitalism to victory.  During World War II, Mannerheim became commander of Finland's armed forces and in 1944 he became Finland's sixth president.

Next we find ourselves at the Central Railway Station which is distinguished by its clock tower and two pair of giant statues holding globe lamps flanking the front entrance. 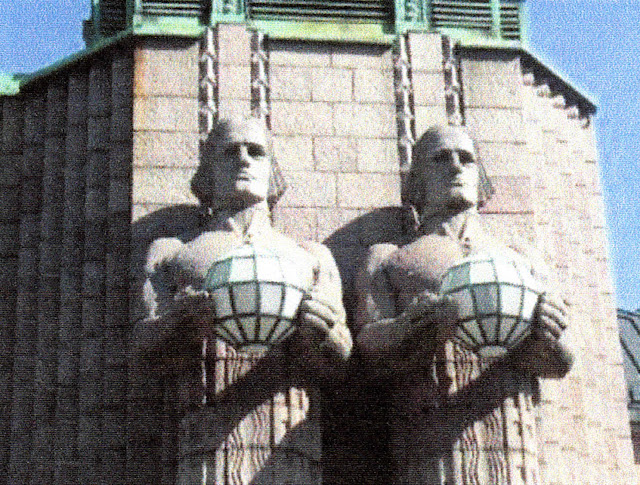 These statues are famous in Helsinki.  Their mugs are featured in advertising throughout the city. 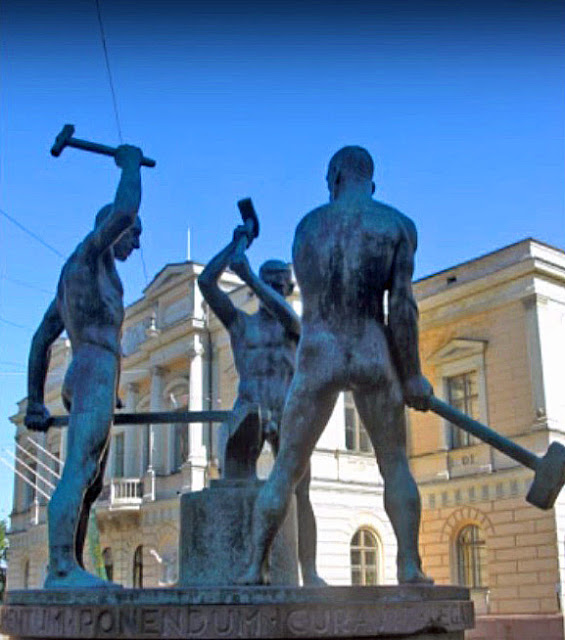 Across the street from Central Station are the Three Blacksmiths Statue (very Soviet looking), which stands in front of Stockmann's Department store, perpetually pounding their anvil while naked. 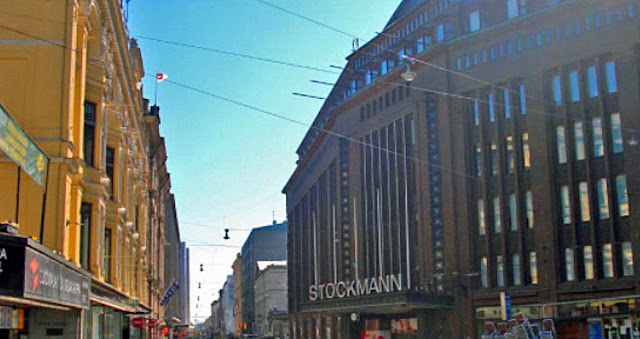 Not being much for shopping we walked through the bottom floor of Stockmann's and out the other side to the Esplanade a long park that we followed across town to Senate Square.  The Esplanade park is just as clean and well kept as the rest of the city.  A joy to explore and experience.

At the end of the Esplanade, turn left to arrive at Senate Square. 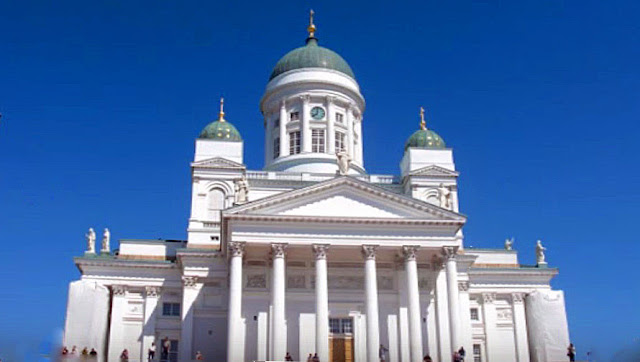 A wee bit more of Finish history:  In 1809 Finland was annexed to Imperial Russia as an Autonomous Grand Duchy.  In 1812, Helsinki became the capital of Finland the Autonomous Grand Duchy a territory of Imperial Russia.  Since most of Helsinki had been destroyed by the Russians during its annexation, the city needed to be rebuilt. The town plan centered around Senate Square was drawn by Johan Albrecht Ehrenström. The buildings, which were patterned after Saint Petersburg, Russia, were designed by Carl Luwig Engel.

The cathedral on Senate Square was built for Nicholas I, the Tsar of Russia and was originally called St. Nicholas Church until Finland declared independence from Russia in 1917.  The Cathedral is now called the Lutheran Cathedral.

Having the same kind of luck we had all morning with places being closed, we climbed the stairs to the entrance of the Lutheran Cathedral just in time to get inside the door, snap a few pictures and be immediately corralled out by ushers.  Strike Three - So time for lunch.

We stumbled upon the restaurant Sunn Senaatitori which had great food and an unobstructed panorama view of Senate Square.

In the center of Senate Square is a statue of Russian Tsar Alexander II on a pedestal surrounded by figures representing the law (Lex), light (Lux), work (Labor) and peace (Pax).

After lunch we walked past the Presidential Palace on our way to Uspenski Cathedral.  Tarja Halone the 11th and current president of Finland is the first female to hold the office. 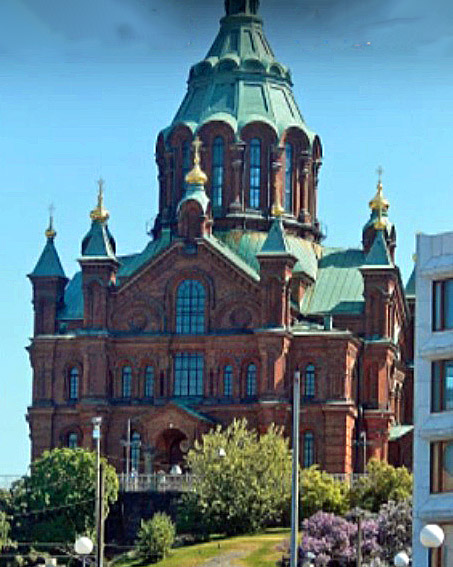 The Uspenski Cathedral sits on a hillside on the Katainokka peninsula overlooking Market Square and Senate Square.  Built in the Russian Byzantine style in 1862-1868, this is the largest Orthodox Church in Western Europe, the main church of the Archdiocese of Helsinki in the Finnish Orthodox Church and falls under the umbrella of Eastern Orthodoxy.

While the Catholic and Eastern Orthodox Church are still separate, we share much in common; both have valid holy orders, apostolic succession, and celebrate the same sacraments.  There is hope that we will once again be united and Jesus' prayer to His Father in the Garden of Gethsemane, "that they may be one just as we are," (John 17:11) will be fulfilled.

The Uspenski Cathedral is built with red brick topped with 13 green and gold onion domes which represent Christ and the twelve apostles.  Inside, the church is void of pews.  The people of this parish stand for the most part during their service.  The walls and ceiling are covered with icons either mosaic or painted.  An icon is a "window to the eternal."  In Eastern Orthodoxy when you gaze upon an icon you are believed to be in the actual presence  of the image depicted. 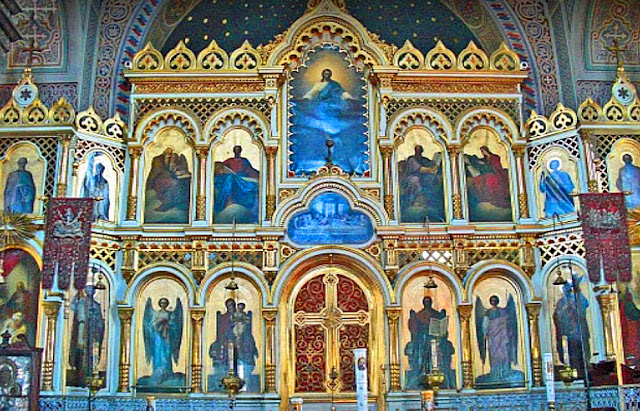 At the front of the church is a magnificent  iconostasis -- wall of icons which consists of one or more tiers of icons.

The Uspenski iconostasis has two tiers (unless you count the icons on the podiums, then it would be three).  The doors in the center are called the Holy Doors.  This is where the clergy enter processing with the sacred vessels that are kept behind the doors.  To the right of the door is an icon of the Pantocrator (Jesus) and to the left is the Theotokos (Mary).

The Uspenski is dedicated to the Dormition of the Theotokos.  Dormition is the "falling asleep" or death of the Theotokos, and her bodily resurrection before being taken up (Assumption) into heaven. Theotokos which literally translated from the Greek is God-bearer, referring to Mary. 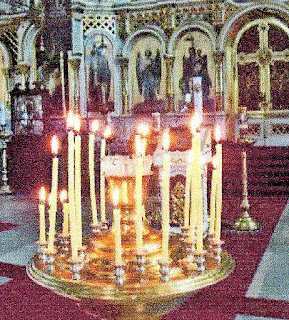 We lit candles for all of our prayers and petitions that we hold and for members of our family living and deceased.


Before catching the tram back to the ship, we walked through the Market Square filled with vendors selling fresh fish, and vegetables and outdoor cafes and BIRDS.  Lots and lots of birds.


If time was not an issue a visit to Seurasaari, Helsinki's open air historic museum and a walk around the Suomenlinna Fortress would have added the cherry to the top of a perfect day in Helsinki.

For an interactive map and guided walking tour covering many of our tours please be sure to download the GPSmyCity App from the iTunes store. The App covers an extensive library of articles and walking tours from over 470 cities worldwide, and now features articles from Adventures of a Home Town Tourist covering Carmel and Monterey (with more cities on the way).
_____