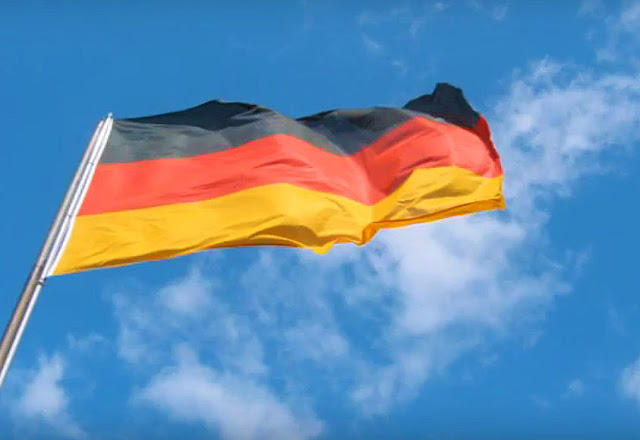 After a smooth overnight sail we arrived in Warnemunde, Germany at the industrial Port of Rostock.  Our ship docked across from the cooling tower at the Rostock bituminous coal power station.

Though Warnemunde is considered a seaside resort, it is better known as the jumping-off point for Berlin, which is where we were headed.

Our Norwegian Cruise Panoramic Berlin and Historic Potsdam Tour began with a bus ride to the Rostock train station.  There we boarded a chartered train for a scenic three hour ride to Berlin.

Though the train was not air conditioned, opening the cabin window and the outer hall window allowed for a perfect cross breeze.

We passed fields of poppies and graffiti covered buildings, an interesting contrast, before arriving at the Berlin-Lichtenberg Station in former East Berlin.

Here we met our guide, a lovely German woman who was so proud to be showing us her unified city. So proud in fact that many of her statements started with "so proud."  "Berliner's are so proud" she said, "that they can now speak truthfully about their city, and that they can even freely protest."

The day we were in East Berlin, Berliner's were protesting about wanting more bikes to be allowed on the streets.  So that meant everyone who was not working was to take to the street on their bicycle and protest!

"Berliners remember when they were not free to come, go, speak, worship or protest.  20 years ago riding your bike between East and West Berlin was verboten.  So today we are so proud to peacefully protest," our guide remarked.

First stop, the East-Side Gallery, a section of the original Berlin Wall.  Artists from all over the world were commissioned to paint murals 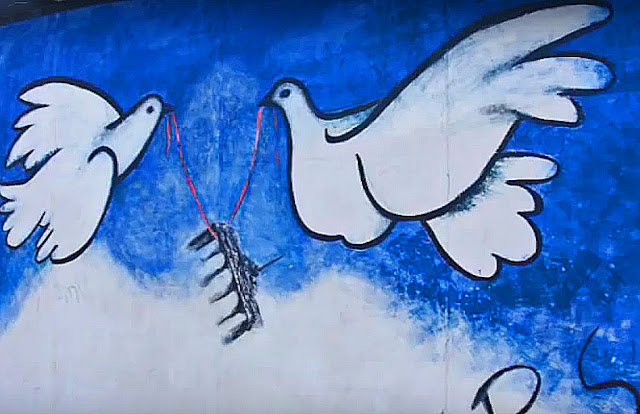 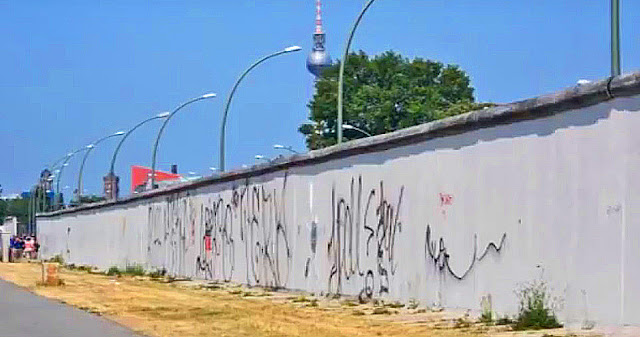 The following (in text and video) is a really abbreviated history of the Berlin Wall.


On May 8, 1945 Germany surrenders.  Between July 16, and August 2, 1945 Allied leaders, Truman, Churchill, and Stalin meet in Potsdam at the Cecilienhof Palace.

One of the outcomes of this conference was to divide Germany into four zones (one zone for France, United Kingdom, United States, and Soviet Union).  Berlin which sat in the middle of the Soviet zone was divided into four the same way. 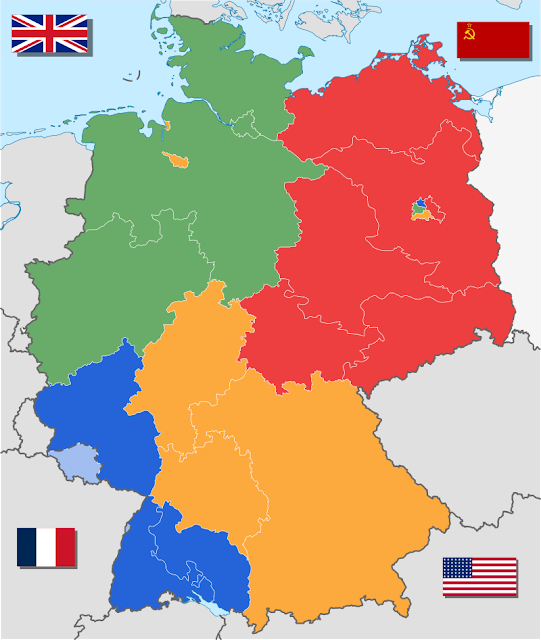 East German's would be charged with treason if they tried to leave East Germany.  They could however "escape" by crossing the open border from East Berlin into West Berlin and then fly out under the protection of the Allied air corridor. 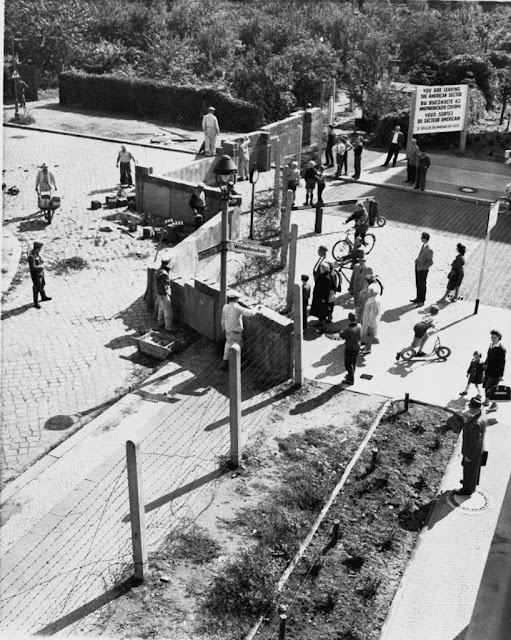 On August 13, 1961, East Berliners woke up to find the border between East and West Berlin closed.  Families and friends separated initially by wire, then a wall built so tall relatives would stand on ladders to get a glimpse and wave to their family member on the other side.  A wall built to keep its own people in, not to keep their enemy out.

East Berliners were not the only ones effected by the barrier.  The Berlin Wall ran completely around West Berlin.  West Berlin was walled in on its own island.  In order for West Berliners to pass through East Germany to West Germany, formal documents were needed to enter and leave East Germany.

The Wall was not completed all at once.  First barbed wire fencing went up.  This was replaced with 12 to 15 foot concrete walls.  These walls were then topped with a round edge intended to make it difficult to get a handhold.

In some areas, apartments or buildings were used as part of The Wall.  On Bernauer Straße you could enter your front door in East Berlin then jump out your back window into West Berlin.  And many did.  Well, the Soviets caught on to this and these "open features" were boarded up.

The Berlin Wall System evolved over time as new means of escape were addressed and thwarted.  To escape over The Wall  from the Eastern side, one had to cross the Death Strip, or Now Man's Land.  This area started with a "back-up wall," cross this and you faced the border signal electric fence, survive this then face sharp hump barriers (intended to stop tanks), then pass the watchtower area illuminated at night by large search lights, cross the lighted convoy path, cross the sand control strip (which was examined for footprints regularly), hop the motor vehicle blocking trench an you are AT the East Berlin side of The Wall.  If you are still alive, all you have to do is scale The Wall before the attack dogs arrive.

Twenty nine years after the border was closed between East and West Berlin, on November 9, 1989, the Berlin Wall was opened.  In areas where The Wall was taken down, the street has been repaved with a cobble stone line. Our tour bus symbolically parked with half of the bus in the former East and half in the former West, because they could.  East and West Berliners are united again, and they are very proud. 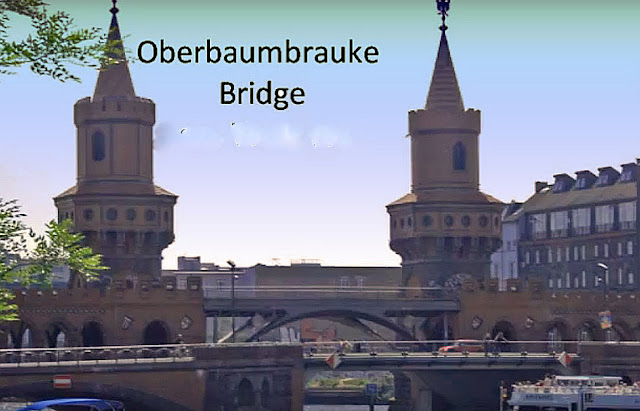 We spent time at the East Side Gallery going from East to West.  From the west side of the wall the view is across the River Spree to the Oberbaum Bridge.  This links two areas formerly divided by The Wall. 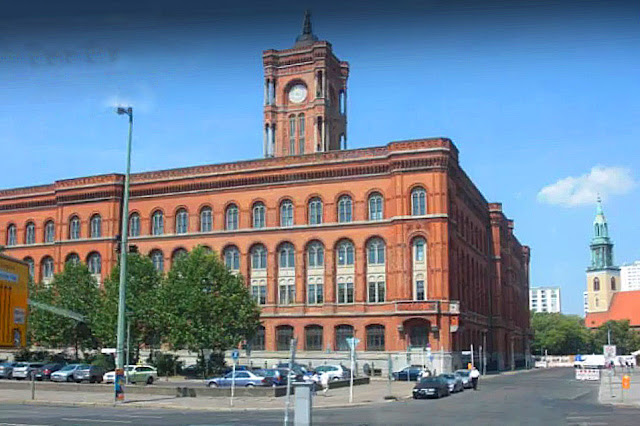 Back on the bus, we ride through the former eastern section, pass Saint Mary's Church (originally Catholic until 1539, then Protestant), the Rotes Rathaus (Red City Hall), the town hall of Berlin, the modern TV Tower, the Berliner Dom (Berlin Cathedral of the Evangelical Church),  Gendarmenmarkt Square, to the boulevard Unter den Linden.  At one of the numerous restaurants on this street, we are treated to a huge German lunch.

After lunch we walked down the Unter den Linden to the Brandenburg Gate. 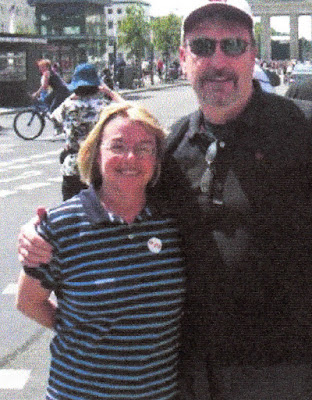 Back on the bus, our tour passes the German Parliament, Reichstag, the Memorial to Murdered Jews of Europe, to our next stop, Checkpoint Charlie.  This was one of the points of division between East and West Berlin (the American Sector).  The name Charlie is for the letter C.  Alpha (A) Checkpoint is at Helmstedt and Bravo (B) at Dreilinden. 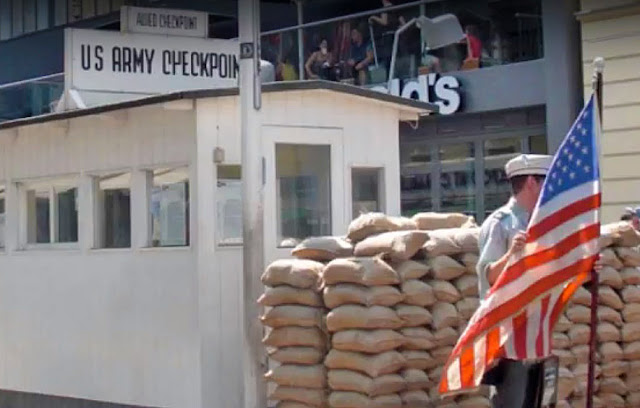 In 1961 Soviet and US tanks faced off at Checkpoint Charlie.  Today it is a tourist attraction with actors posing at the site.  They shake their finger at you and hide their face if you do not pay them for taking a picture. 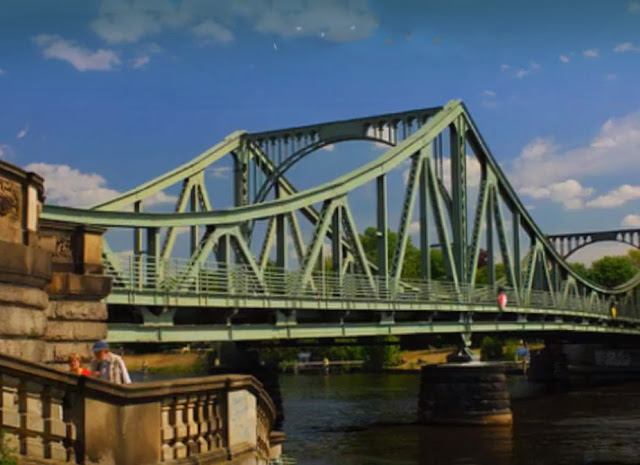 Today anyone can freely drive, walk or ride across this bridge.

A short drive out of Berlin and we have arrived in Potsdam, the capital city of the German state of Brandenburg, a city dotted with Prussian palaces and framed by lakes connected by rivers and parks.

Our first stop is Sanssouci Palace.  The name is derived from the French and roughly translates to "no worries." This palace sits in the middle of a huge park on top of a steep carriage path, surrounded by tall colonnades and flanked by terraced vineyards, gazebos, and fountains.

This palace was designed between 1745 and 1747 to fulfill King Frederick II's (Frederick the Great) need for a private residence where he could relax and have, you guessed it, no worries. 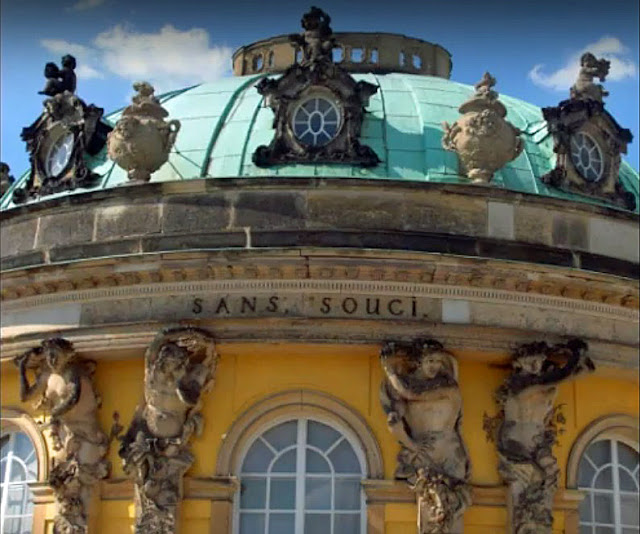 Frederick enjoyed when people came to visit him at Sanssouci, but he rather that they stay only a few days.  So he didn't make this palace as comfortable as it could have been for guests.  But being a good Prussian King, he had another palace (more comfortable for guests) built on the WAY other side of Sanssouci Park called Neues Palace where guests were welcome to stay as long as they wanted.

Frederick the Great is buried on the grounds of Sanssouci next to his best friend, his favorite dog.  He was also known as the Potato King because he introduced potato farming in Germany.  To this day people put potatoes on his grave, odd, but apparently endearing.

Sanssouci was designed in rococo style, which is whimsical, playful and lighthearted (makes sense with the "no worries" theme).  Corinthian columns curve outward from the palace in a semicircle are decorated with carved figures such as Bacchus.  Frederick's Neues Palace is much more elaborate, completed in 1769, in the baroque style. 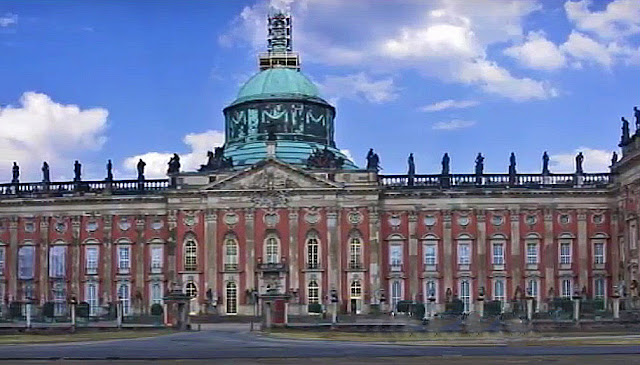 Our final stop on this eight hour bus trek across Berlin and Potsdam, was Cecilienhof, built between 1914 and 1917 in Neuer Garten park in Potsdam for Prince Wilhelm of Germany and his wife Cecilie.  The home was designed like an English Tudor country house and in 1990 was made a UNESCO World Heritage Site. 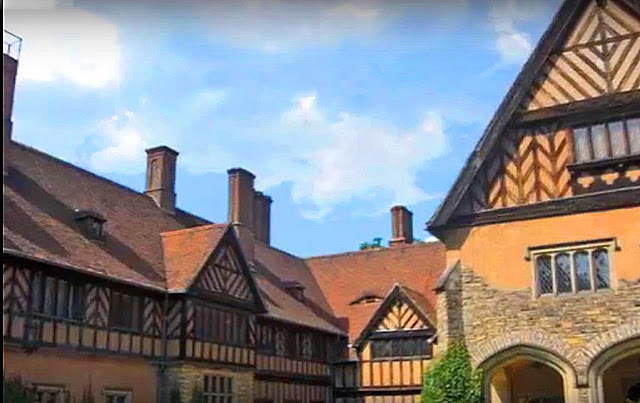 Cecilienhof was the location of the Potsdam Conference between July 16, and August 2, 1945.  At this conference, Winston Churchill, Joseph Stalin, and Harry S. Truman met to, among other things, define the borders of Germany.

From here, we were dropped at the Potsdam train station for a three hour ride back to Warnemunde, Germany.

A great day in an area we never thought we would visit.  Tomorrow we are at sea for a well deserved day of rest before arriving in Helsinki, Finland.

****
For an interactive map and guided walking tour covering many of our tours please be sure to download the GPSmyCity App from the iTunes store. The App covers an extensive library of articles and walking tours from over 470 cities worldwide, and now features articles from Adventures of a Home Town Tourist covering Carmel and Monterey (with more cities on the way).
_____
All photography or video by L A Momboisse and R M Momboisse unless listed below: