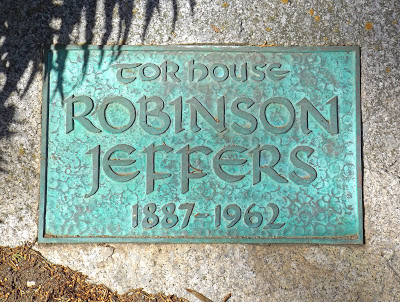 Robinson Jeffers grandfather, Joseph Jeffers, came to America in the early 1800's from County Monaghan Ireland a Province of Ulster, his Grandmother Barbara's family from Palatinate, Bavaria.  After their marriage, Robinson's grandparents, who were members of the Covenanter Church, a Presbyterian movement, settled in Ohio where Joseph worked as a farmer and frontier schoolteacher. On May 1, 1838, in Cadiz, Ohio, William Hamilton Jeffers, Robinson's father was born.


Raised in an extremely religious home, William Hamilton Jeffers graduated from Geneva College in 1855 and Xenia Theological Seminary in 1859, and became a minister.  In 1865 he took a position as a professor of Latin and Hebrew at Westminster College. From 1877 to 1885 he held a chair and was a professor of Old Testament Literature at the Western Theological Seminary in Pittsburgh. By 1885, Dr. William Hamilton Jeffers, A.B., D.D., LL.D., a brilliant scholar of Latin, Greek, and Hebrew, with a doctoral degree in divinity and law, was a widower, and after the death of his two young sons, childless. 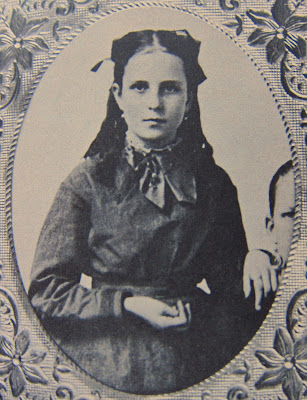 Maternal Background
Annie Tuttle was a descendant of William and Elizabeth Tuttle who came to America during the Great Migration from England on the ship Planter in 1635.  Born September 5, 1860, Annie was the second child of Edwin and Mary Tuttle of North East, Pennsylvania.  A few months after the birth of their third child, Mary Georgiana (Minnie), on May 19, 1863, Edwin Tuttle passed away leaving his thirty-one year old wife Mary Tuttle, in poor health herself, to care for their three daughters under 6 years of age.
Mary Tuttle lived eleven more years.  After her passing Annie, age fourteen in 1874, and her two sisters went to live with their father, Edwin's first cousin, John Robinson, and his wife Philena in Sewickley, a suburb of Pittsburgh, Pennsylvania.
John and Philena had no children of their own, but having the means, he was a founding member of Robinson Brothers banking, they agreed to raise Annie and her sisters.
For seven years, Annie pursued the study of music. Then using her talent she taught piano lessons to the neighborhood children at John Way's Edgeworth Seminary during the week, and on Sunday played the organ at the Presbyterian Congregational Church where her uncle John Robinson was an elder.
In 1884, Dr. Bittinger, the pastor of the Presbyterian Congregational Church who was in poor health requested a supply preacher.  Dr.William Hamilton Jeffers of Western Theological Seminary was contacted and asked to fill in during Dr. Bittinger convalescence.
At the time it was customary for church elders to invite visiting preachers to their home for dinner. And it was here in the home of elder John Robinson, Dr. William Hamilton Jeffers became acquainted with the church organist, Anne Tuttle.

Very soon it was evident to John and Philena that the visiting pastor was romantically interested in Annie.  "When the doctor asked John, "What is your objection to me?"  John replied tersely, "My objection is, you."" (1)  But, the pastor finally won over the objection of the Robinsons.
Dr. and Mrs. William Hamilton Jeffers
In a letter to her aunt Hetty Bosworth on February 10, 1885, Annie wrote, "A gentleman called here one evening, requesting a confidential talk with me, and when he went, I found myself engaged to be married! It happened a week ago, and I have hardly been able to take it in yet. I know you are surprised even more than I am, and I am awfully surprised.  He never paid me the least bit of attention publicly, and he lives in Allegheny, so it will be a perfect surprise for everybody here.  What is his name and business, and what does he look like, you say?  Prepare for another surprise, and perhaps a little disappointment.  His name is Rev. Dr. W. H. Jeffers, and he is a deal older than I am, and not a bit handsome; very tall and, in fact, quite homely but so good!  And so good and kind and thoughtful for me.  I am happy, and will be happy, though he is nearly twice as old as I am."(2)
On April 30, 1885, 25 year old Annie and 47 year old William were married in the Robinsons' parlor.  Immediately following the wedding, the newlyweds returned to Allegheny to a house at 723 Ridge Avenue where one of John Robinson's brothers, Dr.Thomas Robinson and his wife lived. It was in this house on January 10, 1887 their first son was born. 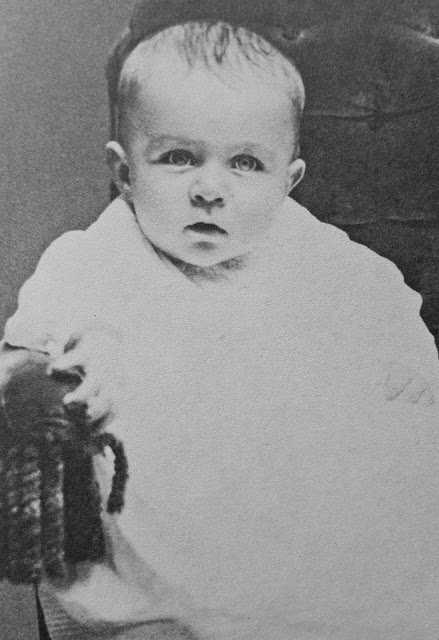 Annie and William's son was baptized April 30, 1887 of which Annie wrote, "Today being the anniversary of our wedding we thought it a very appropriate time to have the baby baptized. After considerable thought and discussion pro and con we decided to call our boy John Robinson.  Cousin John seemed pleased, and shows his appreciation in various ways; one way was by sending him a beautiful new dress for his baptismal robe...Cousin Thomas administered the baptism. The baby was just as good and sweet as possible all through the service; but afterwards when everybody began to talk and to crowd around him he looked around with a frightened gaze, his lips trembling and then such a piteous cry burst forth. He was soon pacified however, and just as good as ever..."(3)
Next:  Robinson Jeffers - The Early Years 1891 - 1905
___
Photo Annie Robinson Tuttle (Jeffers) - Melba Berry Bennett, The Stone Mason of Tor House - The Life and Work of Robinson Jeffers (The Ward Ritchie Press, 1966).