Skip to main content
Labels
Posted by Adventures of A Home Town Tourist May 19, 2013

"In 1919 we built Tor House on a knoll where stones jutting out the treeless moor reminded us of tors on Dartmoor.  Our favorite walk had been along the grass drown track that wound around the Point.  At that time there were no houses, except the Reamer's and Driftwood Cottage, beyond Philip Wilson's at 14th and San Antonio." (Una Jeffers) (1) 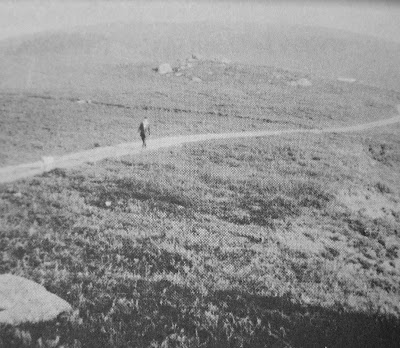 The area of Carmel Point had been surveyed and subdivided into building lots around 1909. Few lots had sold and the plotted streets had not been made when the Jeffers decided to buy sixteen lots for $200 each in 1919. They had future plans to eventually own the entire block which contained thirty-six lots, and a few years after their initial purchase they did acquire more. By 1929 they owned the entire block, purchasing the last three lots for $3,000 each.

Una had very specific ideas for the design of their home; she wanted it to be small, built of stone, and resemble a Tudor barn that she had seen on one of their trips to England. The Jeffers hired Michael J. Murphy, who had been building homes in Carmel since 1902, and Pierson, a stone mason out of Monterey. Maybe for economical reasons, Robin and Una decided to use the granite available from the beach below their lot, instead of Carmel chalkstone.  They had heard that the chalkstone did not hold up well in heavy weather conditions, which they were sure to face on the barren Carmel Point. 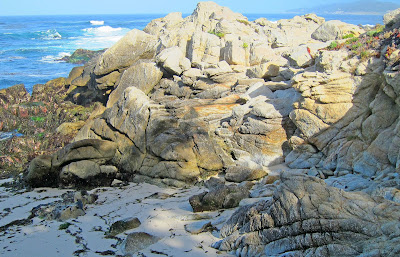 Before the first stones could be laid, the labor intensive foundation had to be excavated by a horse-drawn scraper and pick and shovel.  Then Mr. Murphy would construct a wooden railway from the beach to the top of the tor.  A cart pulled by horses would bring the heavy granite boulders from the beach up to the construction site. 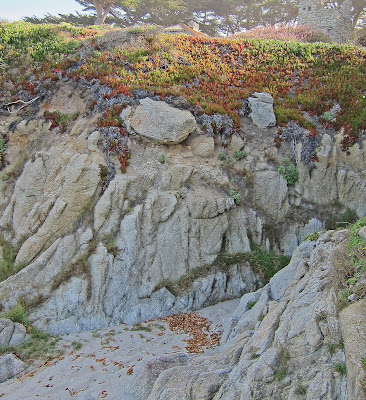 The picture above was taken in 2013 from the beach directly below Tor House.  One can see how far the rocks would have to be moved in order to get them up to the home site. Hawk Tower can be seen in the upper right of the photograph. 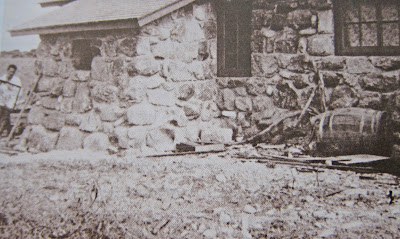 Perhaps because he saw his bank account dwindling with every stone laid on his house, or perhaps he just felt the need to get involved in the actual construction, Robin took an interest in stonework. Having no skill when it came to masonry, or physical labor of any kind, for that matter, Robin convinced Mr. Murphy to hire him to mix the mortar and act as the hodman (the one who carries supplies) to the master mason. 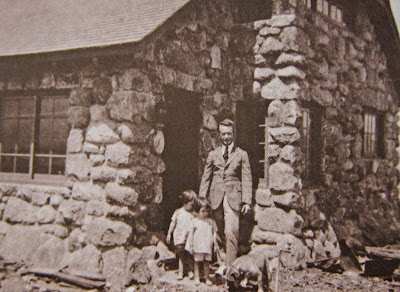 Finally Tor House was ready for occupancy and the happy family, Robin, Una, three year old twins Garth and Donnan and bulldog "Billie" moved in on August 15, 1919.  Ted and Edith Kuster continued to be good friends with the Jeffers.  The picture above shows Ted, the twins and Billie in front of Tor House on the day the Jeffers moved in.

The house consisted of a long living room with windows that faced westward over the ocean and southward toward the Santa Lucia Mountains and Point Lobos. Una's Steinway piano, a possession from her marriage to Ted Kuster, was placed in this room.   In the northwest corner off the living room was a guest bedroom to which Edith Kuster frequently occupied on her visits be with Una.  On the first floor there was also a small kitchen and bathroom.  Above the living area reached by a short steep stairway brought from Una's childhood home in Michigan, and trap door, were two attic rooms.  One occupied by Robin and Una consisting of a bed, writing desk and a reed organ.  The other under the sloping roof line was the twins bedroom.

The  house had running water but no electricity, gas, or telephone.  None of these were obtainable at this time on Carmel Point.  Yet, it is interesting to note that even when they did become available the Jeffers family chose not to install them.  It was not until 1941 when Una and Robin wanting to keep in touch with their adult sons,  was a telephone installed. And it wasn't until both kerosene and wicks for the homes numerous oil lamps became more difficult to obtain that electricity was finally installed in 1949. A system of pipes in back of the living room fireplace heated the water pumped from a storage tank to supply hot water for cooking and cleaning. 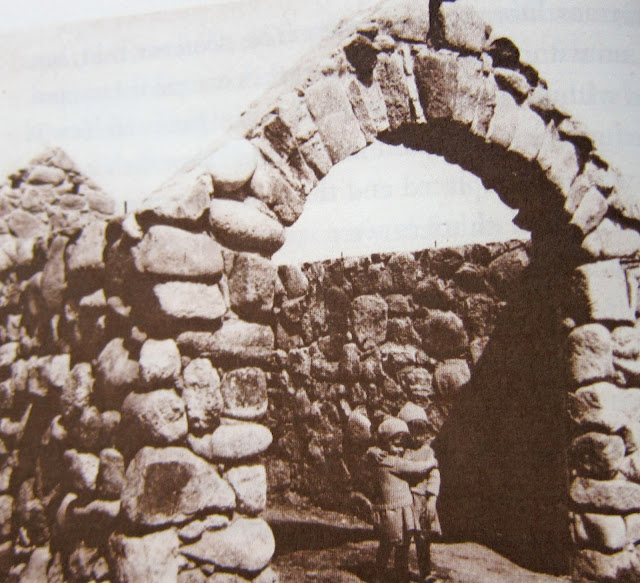 
Shortly after moving into their new home, it was decided that the family needed a garage to protect their Model T Ford from rusting in the salt air.  Using his new masonry knowledge, Robin built a stone garage separate from the main house that he finished in 1920.

Donnan writes, "Soon after its [the garage] completion he [Robin] chanced to read that, for proper support, a Roman arch of this kind should have a width of masonry on each side of it of the same size as the arch itself.  He went to gaze with horror at the arch of his garage, which had no such support.  He could detect no sign of incipient failure, but nevertheless hastened to add a massive buttress on each side." (2)

When Robin and Una purchased the lots on Carmel Point, the land was desolate, looking nothing like it does today.  The Jeffers were warned that the wind could be fierce there and that it would be best to build the roof line low to stand against the wind.  They were also advised that the ceiling should also be built low in order to keep the heat in during the winter months. Still with all the planning, Una, the ever protective mother, feared that the windows in the living room would not stand up to the winds on the point, and warned Garth and Donnan never to stand near these windows during storms.

In order to shelter their home further from the winds, Robin bought and planted Monterey Pine, Monterey Cypress and Eucalyptus trees, approximately 2,000 in all.  This took years.  He painstakingly watered each of them until they could survive on their own. Today the trees line the city block the Jeffers owned at one time. Robin single handedly transformed Carmel Point from a barren sand dune to the majestic forest that exists today. 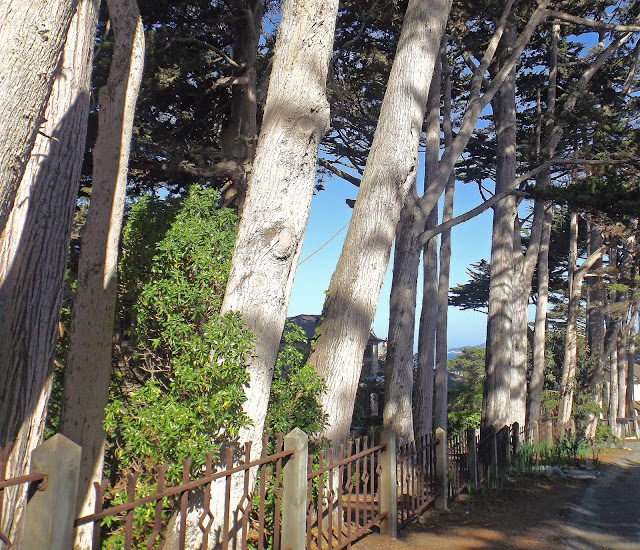 Una was captivated with the round towers of Ireland and Robin was captivated by his muse, Una.  Shortly after the garage was finished, Robin began work on the tower, a project that would take him almost five years to complete.  But Robin did not build this alone he had help from Garth and Donnan. 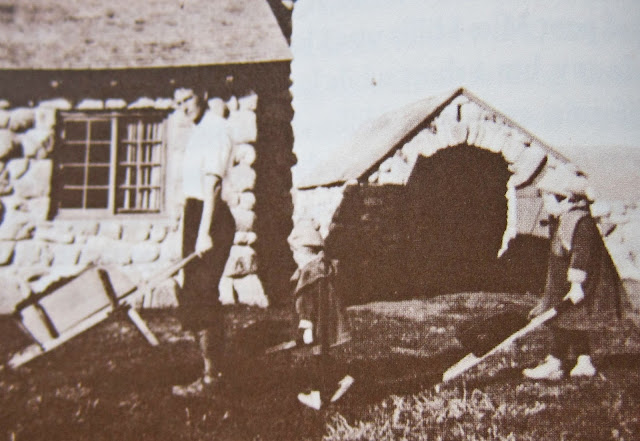 Hawk Tower was built on a foundation of bedrock.  For the first two stories of the tower, Robin rolled the granite stones up a series of inclined planks similar to that devised by the Egyptians.

For the third and fourth stories of the structure he installed a block-and-tackle system to hoist the heavy rocks up the side of the tower, rest them on a corner and then roll them along the wall into place.  When completed the walls were forty feet high and some six feet thick.

In the December 12, 1928 edition of The Carmelite, Ella Winter, a neighbor and journalist with radical views, wrote, "The same figure [Robin] was watched by indifferent and then increasingly curious neighbors...as it [Robin] hauled great granite boulders from the beach and rolled them up an inclined plane, higher and higher in the course of the five or six years that Robinson Jeffers took to build his Hawk Tower.  Early Carmelites recall how in those days they first wondered, then ceased to wonder, as the phenomenon took on the slow unchangeability of the cliffs and the ocean and the herons flying.  You cannot wonder all of six years.  And so Robinson Jeffers came to be accepted in his home surroundings as on with the nature he loves so well, as permanent and unperishable."

If you should look for this place after a
handful of lifetimes:
Perhaps of my planted forest a few
May stand yet, dark-leaved Australians or the
coast cypress, haggard
With storm-drift; but fire and the axe are devils.
Look for foundations of sea-worn granite,
my fingers had the art
To make stone love stone, you will find some remnant.
But if you should look in your idleness after ten
thousand years:
It is the granite knoll on the granite
And lava tongue in the midst of the bay, by the
mouth of the Carmel
River-valley, these four will remain
In the change of names.  You will know it by the
wild sea-fragrance of wind
Though the ocean may have climbed or retired a little;
You will know it by the valley inland that our sun
and our moon were born from
Before the poles changed; and Orion in December
Evenings was strung in the throat of the valley
like a lamp-lighted bridge.
Come in the morning you will see white gulls
Weaving a dance over blue water,
the wane of the moon
Their dance-companion, a ghost walking
By daylight, but wider and whiter than
any bird in the world. (3)

Black and White Photo - Donnan Call Jeffers, The Building of Tor House (Jeffers Literary Properties, 1993, Reprinted Ryan Ranch Printers, Monterey, California, 2008), 4 - "On the reverse of this photograph, Mother has written, "Robinson Jeffers and white English bulldog 'Donovitz Master' ('Billie') walking along the Sea Road, 1918.  They are walking northward and directly behind them is the tor by which Tor House was built." (Donnan Call Jeffers)

Black and White Photo - Donnan Call Jeffers, The Building of Tor House (Jeffers Literary Properties, 1993, Reprinted Ryan Ranch Printers, Monterey, California, 2008), 9 - "Father had the job of assisting the mason, Pierson.  In this photograph, taken in 1919, he is holding a screen that might have been used in preparing sand for mortar." (Donnan Call Jeffers)