Skip to main content
Labels
Posted by Adventures of A Home Town Tourist May 17, 2013 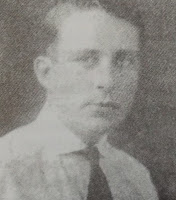 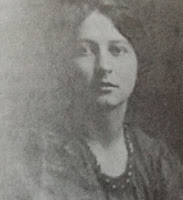 Robin and Una were married August 2, 1913, and for some reason remained friends with Ted Kuster and his new wife Edith Emmons Kuster.  In her 1939 memoir, Of Una Jeffers, Edith writes, "One evening, a year after Una and Robin were married, Robin was reading aloud to us.  He picked up a book and said, "There is the most perfect description of Una in this.  I couldn't have written a better one.  De Quincy wrote it, describing Dorothy Wordsworth:

She was short and slight, a glancing quickness in all her movements, with a warm, even ardent manner and a speech...agitated by her excessive organic sensibility.  Her eyes not soft but wild and startling which seemed to glow with some subtle fire that burned within her...

I may sum up her character as a companion by saying that she was the very wildest (in the sense of the most natural) person I have ever known, and also the truest, most inevitable, and at the same time the quickest and readiest in her sympathy with either joy or sorrow, laughter or tears, with the realities of life or the eager realities of the poets...

An exquisite regard for common things  a quick discernment of the one point of interest or beauty in the most ordinary incident was the secret of her spell on all who met her." (1)


Robin and Una
The Early Years

Robin received the inheritance from John Robinson, his mother's cousin and guardian, in 1912.  This small windfall seemed to the the newlyweds enough money to enable them to move to Lyme Regis a village on the southern coast of England. They had plans to leave in October when fares for the Atlantic crossing were lower, but their plans changed when they found out that Una was pregnant.

Instead of moving out of the country, they rented a house in La Jolla. Their friends, Ted and Edith Kuster, decided to joined them in La Jolla for a few months and the two couples went on numerous excursions together.  Edith writes, "Una and Robin lived in La Jolla in a little house called "Breezy Nest."  It was perched high on a hill above the sea.  We used to visit them there and had great fun walking over the rocks and cliffs." (2) 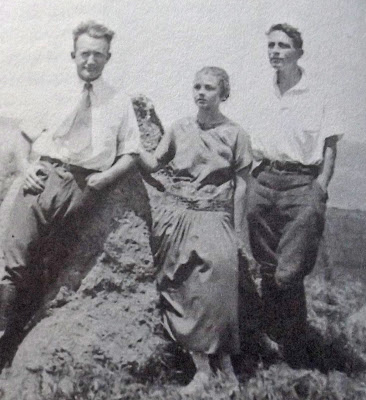 A month before their baby was due, Robin and Una moved to an apartment near Good Samaritan Hospital in Los Angeles.  On May 5, 1914 their first child a ten pound baby girl they named Maeve was born. Sadly she lived only one day.

The Jeffers moved in with Robin's parents in Pasadena while they determined what they should do and where they would live next. By now World War I  had started and they had completely given up any plans of moving to England.

A friend of Una's from her years of marriage to Ted, Fred Clapp, told them about a quaint new village called Carmel-by-the-Sea. It was attracting artists and writers and just might be the perfect place for the Jeffers. In the fall of 1914, Robin and Una traveled north to Carmel.


Dream of the Future (To U.J.)
Faithful and loved, you know when at first we came
Out of the too-bright land,
from a shore without trees,
Though mighty of rocks,
and clothed with the same blue wave, -
You know how our hearts
were moved at looking down


From the high peninsular yoke;
the breath of the morning
Hung in the pines; and this, we felt, was our home;
This, the narrow bay; the promontories;
The islands, each one rock; the capes beyond,
To the left, of Lobos, and yonder of Pescadero.
We were glad; we had found our place. (3)

The Carmel that Robin and Una discovered "was a small village with an unpaved main street called Ocean Avenue, leading down to a white sand beach and a sparkling sea, a few small shops  a post office, and a scattering of houses.  From El Camino Real to the ocean, the view was unbroken by anything but a succession of rolling, white sand dunes. 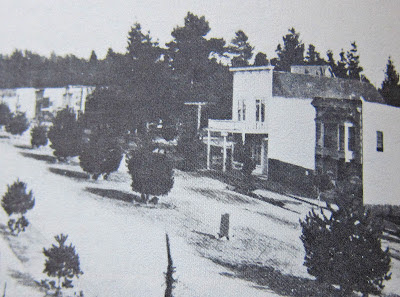 By night there were no street lights, no flashlights; the homes were lighted for the most part, by kerosene lamps or candles.  Late strollers used a contrived miner's lamp of coffee-can and candle, to light their way.  A bulletin board near the post office carried the news of the day...There were few automobiles, as most persons kept a saddle horse.  An eight-horse team made the run between Monterey and Carmel as well as Gould's auto-stage which met the train at Monterey. 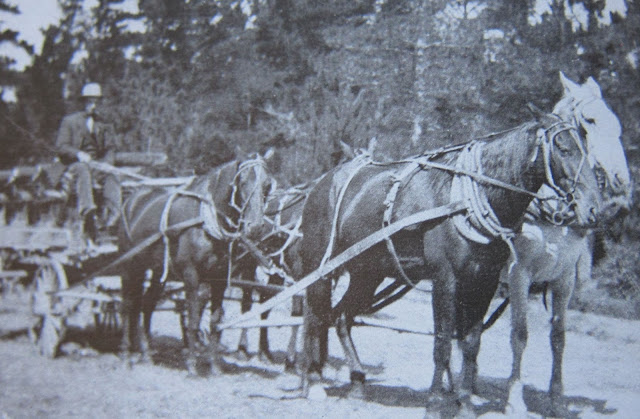 Milk was delivered to the neighborhood "milk shrines" instead of at individual back doors.  The local butcher ruled his customers' menus with a heavy cleaver, giving them not what they wanted but what he needed to dispose of....There were four hotels and four churches...[and] a permanent resident population of about 350 persons...joined in the summer months by professors and their families from Stanford University and the University of California.  There were [also] a number of artists and writers among the permanent residents..." (4)

The first time Robin and Una saw Carmel they knew that they had found the place where they belonged.  "When the stagecoach topped the hill from Monterey," says Jeffers, "and we looked down through the pines and sea-fogs on Carmel Bay, it was evident that we had come without knowing it to our inevitable place." (5)

Robin and Una decided to rent a cabin in a grove of eucalyptus and pine trees at Fourth and Monte Verde. It was in this tiny log cabin, built in 1902-03 by Alameda attorney George H. Richardson, that Una joyfully kept house while Robin wrote poetry. 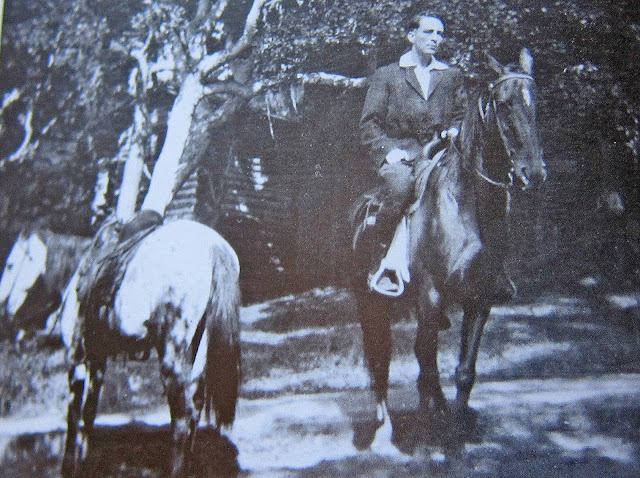 In the Pine Cone, January 10, 1941, Una wrote of their first years in Carmel, "So began our happy life in Carmel, full and over-full of joy from the first...Robin was writing poetry...There was housework, and continual wood chopping to fill the maw of the great fireplace in our drafty cabin.  We bought simple textbooks on flowers, shells, birds, and stars, and used them. We explored the village street by street, followed the traces of the moccasin trail through the forest, and dreamed around the crumbling walls about the old mission.  When we walked up from the shore at sunset scarfs of smoke drifting up from hidden chimneys foretold our own happy supper and evening by the fire.  It was pleasant to sniff the air and recognize the pungent scent of eucalyptus, the faint, somehow nostalgic quality of burning oak, the gun-powdery smell of driftwood, redwood like ripe apricots, and keener than all, the tonic resin of pitch pine." 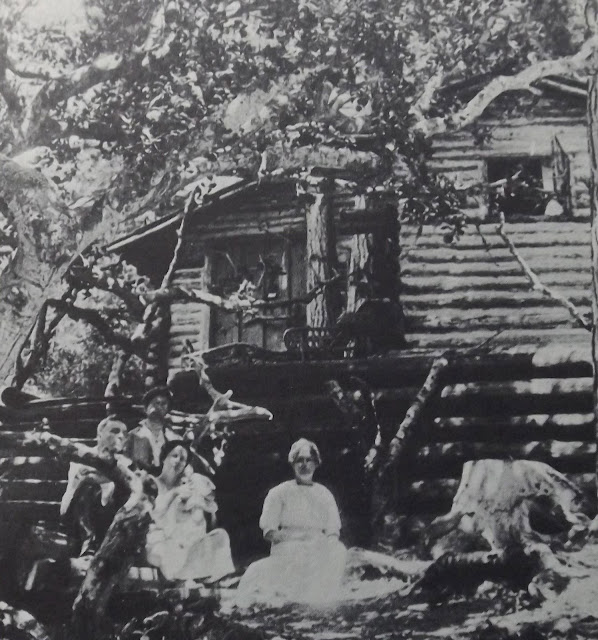 Shortly after their move in 1914, Una wrote to Edith Kuster telling her of how ecstatic she and Robin were to have found Carmel and invited Edith for a visit. Edith writes, "I couldn't get there fast enough.  Una and Robin met me at the train in Monterey.  I peered eagerly out of the window and saw that beautiful bay filled with little blue Spanish and Italian fishing boats...Robin picked up my bags and put them underneath the seat of the surrey Una was driving...I marveled at Una - she handled those two spirited horses so expertly...As we drove up the steep grade toward Carmel, Una stopped to let the horses rest and to point out to me the Monterey Bay behind us - a perfect, blue crescent, one of the most beautiful bays in the world.  To the east of it, behind a black line of pine trees, is Del Monte...When we reached Carmel, we got out and left the horses at Hodges, then Gould's, Livery Stable.  We walked the rest of the way down the joyous little path to the log cabin...The log cabin era is one of my most beautiful memories.  The cabin was not large, a living room with and enormous fireplace, one bedroom and bath and an excessively small kitchen.  Una cooked all the meals on an old iron stove.  She did it so gaily." (6)

Before the Jeffers had lived one year in Carmel, Robin's father would pass away at 76 years of age. Dr. Jeffers made sure that his family was well cared for after his death.

The terms of the will of Dr. William Hamilton Jeffers established a trust that would provide an income of $200 a month for his widow, and two sons. Adding this to his earlier inheritance of $10,000, Robin and Una felt that they could now begin to plan building their own home in this still very undeveloped village of Carmel-by-the-Sea.  Yet five years would pass before they made that move. 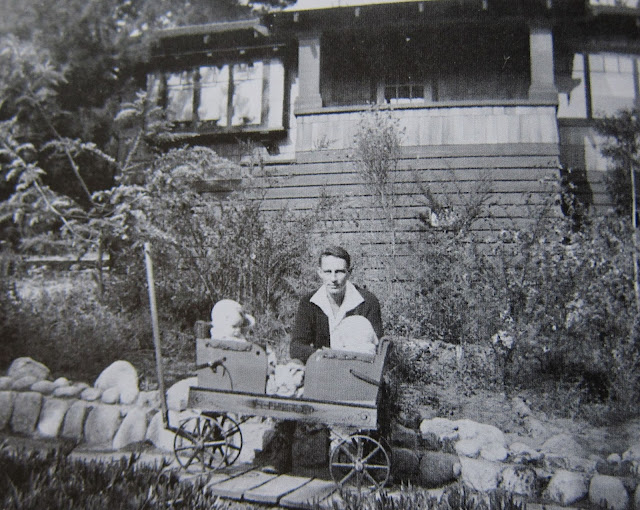 In October 1916, Robin's second book of poems, Californians became his first book accepted by what he considered a genuine publisher, Macmillan.  A month later, Una gave birth to their twins, Garth and Donnan in Pasadena.  The twins were healthy, but after her experience with Maeve, Una decided to stay for seven months with them in Southern California with Robin's mother, while Robin headed back to Carmel in search of a larger home for his family. Which he found in a wood frame house constructed in 1914 for Adelaide J. Trethaway.  This was just up the street from their log cabin, on Lopez Avenue. Trethaway cottage had stunning views of Carmel Point. 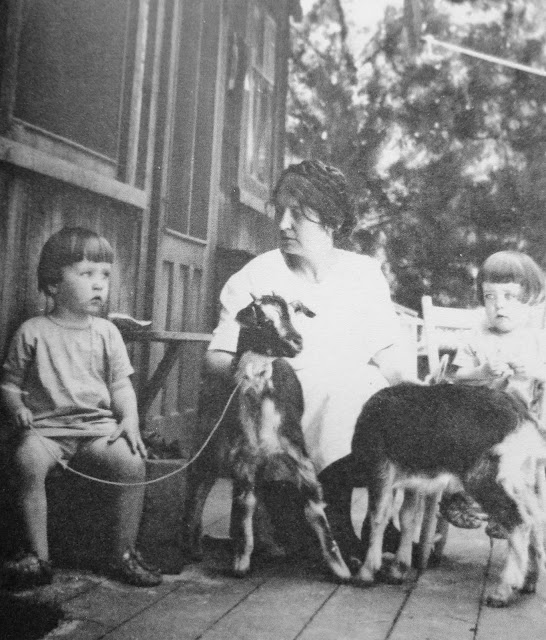 The Tretheway cottage worked for awhile, but Una wanted a home that would be their own to which Robin agreed and in the spring of 1919 they purchased a parcel of land at Carmel Point that had been one of the families favorite picnic spots and to which they had been gazing at for 3 years from their current home.

Black and White photo - Sharon Lee Hale, A Tribute to Yesterday ( Valley Publishers, 1980), 38. - Ocean Avenue looking east in 1916.  Schweniger's Grocery, Carmel Bakery, and Slevin's are on the right side of the photo.

Black and White photo - Monica Hudson, Images of America, Carmel-by-the-Sea (Arcadia Publishing, 2006), 22. - This is the Carmel Stage, pictured c. 1905, the stage would pick up visitors at the Southern Pacific depot in Monterey.  The three-mile trip over the hill would take about two hours.  At the steepest part of the grade, the men were often asked to get out to ease the load on the horses.  - Harrison Memorial Library collection.

Black and White photo - Hudson, 26. - Robinson Jeffers on horseback by their log cabin home at Monte Verde and Fourth Avenue in 1914. -  The Tor House Collection.

Black and White photo - Robin, Great Aunt Mary, Una, and Billie at the Log Cabin in 1915 - Melba Berry Bennett, The Stone Mason of Tor House - The Life and Work of Robinson Jeffers (The Ward Ritchie Press, 1966).

Black and White photo - Garth Sherwood Jeffers, Memories of Tor House (Ryan Ranch Printers, 2011) - "This photograph was probably taken by Father, at the Trethaway House in 1919, before we moved into Tor House.  I am holding the tether of Selysette and appear to be about to receive a scolding or worse."  (Garth Sherwood Jeffers).