Skip to main content
Labels
Posted by Adventures of A Home Town Tourist May 15, 2013 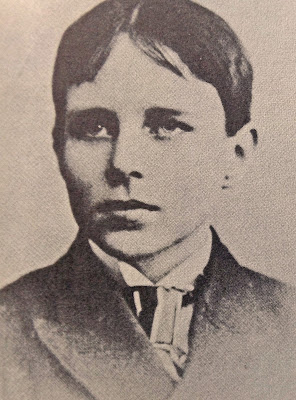 Annie and William settled into life with their young son Robinson. In 1888, using some money from the $60,000 he inherited from his late wife's estate, William built a three story brick house on Thorn Street in Sewickley, a borough in Allegheny County, Pennsylvania,  just a few miles from Pittsburgh along the Ohio River.

George Evans, a cousin of the Annie, writes of Robin during the early years, "During times when they lived within easy walking distance from Aunt Philena's the Jeffers family usually came over in the evening.  My first pictures in memory of Robin are of a child of about four, being pushed in a child's carriage by his father, who seemed to arch forward over it almost dangerously and gaze straight ahead at mother.  Then there came a couple of years later another baby, Hamilton, who took his place in the carriage.  Sometimes the mother would be pushing and in that case, the Doctor would be ambling on ahead, followed by Robin who would be imitating his father’s very walk and stoop and long steps.” (1)

In the summer of 1891 Robinson traveled to Europe with his parents. In June, at age three, he started kindergarten in Zurich Switzerland. "He was allowed to dig in the sand to  make a little garden, planting his own seeds, the blooming to be eventually enjoyed some other little boy since Robin was taken out of the school in three weeks.  The following summer he entered in a kindergarten at Lucerne where he stayed for a somewhat longer period." (2)


In the fall of 1891 the Jeffers family returned from Europe to their home on Thorn Street in Sewickley. Much to William's dismay, Robinson's friends began to visit the house, a distraction that made it difficult for William to concentrate on his work.  There was only one way to rectify this situation, move.

In October 1893 the Jeffers sold their Thorn Street house and moved to Edgeworth, a borough in Allegheny County Pennsylvania about a mile from John Robinson's house. This was far enough out in the country to give William the privacy that he desired, as it was too far for Robinson, now six years old to keep in touch with friends. The following year, 1894, Robinson's little brother Hamilton was born.

By the time Robinson was ten, he had attended two kindergartens in Europe, a private school in Sewickley, the Park Institute in Allegheny, and the Pittsburg Academy.  Though well advanced in his schooling, he was starting to resent his father's pressure to study constantly and ignore any contact with boys his age. 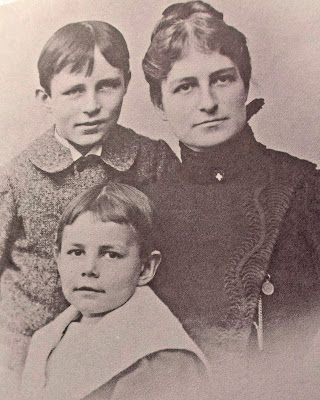 Believing that his son's would receive a better education in Europe, William decided that Robinson and Hamilton should attend boarding school in Europe.  Annie spent the next four years, from 1898 - 1902, abroad with her two sons, her husband joining them only during the summer.

When William visited his family that summer he decided to move Robinson again, this time to the school Château de Vidy at Lausanne, where he stayed for a year. Yet the next year he and his brother Hamilton, who was now seven, were placed in the pension at International Thudichum at Geneva.

"Whether the doctor had an irrational compulsion about leaving his son in any school longer than a year or whether he had some definite plan, we don't know, but every year that he joined his family in Switzerland he removed Robin from whichever school he was attending and placed him in another one.  It is no wonder that Robin kept to himself.  He probably thought that it was not worth the terrific effort it cost to make new friends, only to be snatched away from them." (3)

Later Robinson Jeffers wrote of this period, "I had little or no companionship with other children, and spent much time in daydreams, but I don't remember imagining companions (meaning playmates).  I was usually alone against the (imaginary) world,... Thus, up to fourteen or so, when I found satisfactory companionship of my own age." (4)

By 1902 Robinson's early education must have been completed to his father's satisfaction because Annie and her boys returned to America at which point Robinson, now 15, was enrolled at the University of Western Pennsylvania (now the University of Pittsburgh) in September with a sophomore status.

In April 1903, William, now 67 years old and in poor health decided that the family should move again, this time to Long Beach, California.  The Jeffers lived there only a short time before a home was purchased for $4,000 in the Highland Park area of Los Angeles, at 346 Avenue 57.

That fall, Robinson now 16, enrolled with a junior status in Occidental College. It was here that he began to contribute his poetry to student magazines, The Aurora and The Occidental. The first poem Robinson received payment for, was published in the June 1904 in The Youth's Companion.  He received $12 for his poem, "The Condor."


The Condor
My head is bald with cleaving heaven,
And rough my feathers with the grip
Of clashing winds and clouds wind-driven.
But what of that?  My winds can dare
All loneliest hanging heights of air;
Above the jagged mountain-lip
Their solemn slant and downward dip
Greet the red sun each morn and even.
The storm knows well their broad expanse,
For they can breast its pulsing power
When even the steadfast planets dance
Dizzily thro’ the riotous rack
Of ruined, tattered clouds that scour
O’er heaven.  On the tempest’s back
I clasp my wings, and like a horse
I rein it, mastering its force.
Then, tiring of the sport, I stretch
Upward above its region, far
As if I strove to climb and fetch
The utmost little silver star.
Then I lean low with a flat wing
Upon the lucid air, and swing
Amid the regions of pure peace.
I reck not of the earth below,
But swing, and soar, and never cease,
In circles large and full and slow,
With such a movement, such a grace
That I forget my ugliness.
For the first time since he had started school, Robinson continued in the same school for two years, graduating Occidental College with ten other students (the largest class at the time) on June 15, 1905 at 18 years of age.