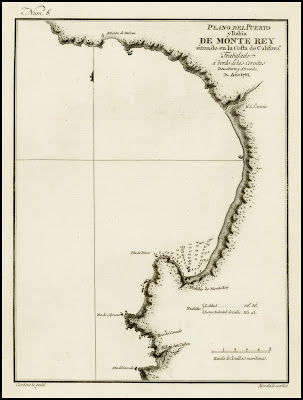 
In 1542 the King of Spain sent Juan Rodríguez Cabrillo in search of the Strait of Anian, a body of water thought to connect the Atlantic and Pacific oceans north of Mexico.


Cabrillo began his voyage in June sailing north with two small vessels.  On September 28, 1542 he entered San Diego Bay and named the area San Miguel.  He continued northward naming and discovering islands and bays, calling the Bay of Monterey, Bahía de los Pinos because of the forest of Pine trees that covered the inland area surrounding the bay.

Unable to anchor Cabrillo continued northward passing San Francisco bay without notice, finally turning back south around Bodega Bay.  The fabled Strait of Anian was not found, but he added the coast of Alta California to the Spanish map.

In 1566 a Spanish galleon that annually sailed from Acapulco for the Philippines chose a longer “circle route” coming home, in order to avoid unfavorable winds.  This route took the galleon near Cape Mendocino before it turned south toward Acapulco. Sailors had been instructed to keep watch for the harbors along Alta California discovered by Cabrillo 24 years earlier. None were spotted.


King Philip III of Spain believed there was a great importance to having a port on the coast of Alta California and sent Sebastián Vizcaíno on May 5, 1602 in search of one. 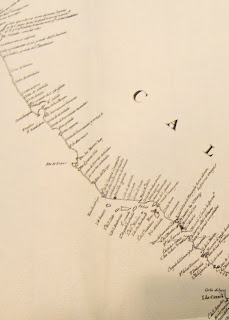 Vizcaíno followed Cabrillo’s route up the coast of Alta California and on December 16, 1602 anchored at Bahía de los Pinos which he renamed Puerto de Monterey and the tip of a pine covered headland Punta de Pinos.


In his diary Vizcaíno wrote, that “his men built a shelter under a great oak near the shore” where Carmelite friar Father Antonio de Ascención celebrated Mass on the beach of Bahía de los Pinos.


Before he returned to Mexico, Vizcaíno spent a few weeks exploring the area finding rolling hills, a pleasantly warm valley and a fertile river running through it all to the sea.  This river he named Carmelo after the three Carmelite priests who accompanied him on this journey.  150 years would pass before this area would be colonized.


In 1769, Jose de Galvez, Visitador-General of New Spain selected a fourfold expedition that would travel by land and sea.  Their objective was Monterey, but they were all to meet first in San Diego. 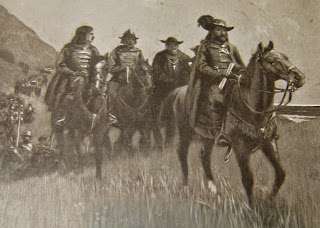 The second land division set off May 15 under the command of Captain Gaspar de Portolá and 56 year old Fr. Junípero Serra who had been selected to be the father-president of the missions to be founded in Alta California.


On July 1, 1769 the last of the four divisions, Portolá and Fr. Serra reached San Diego.  They found the other three divisions suffering from hunger and scurvy.  It was determined that the sick soldiers who could still stand should board the San Antonio and sail back for La Paz and request fresh supplies.  Those who were too sick stayed in San Diego to be cared for by Pedro Prat the surgeon of the expedition, leaving 64 well enough to continue overland with Portolá and Fr. Crespí on July 14.  Fr. Serra stayed behind in San Diego.


The overland expedition failed to recognize Monterey Bay as described by Vizcaíno.  They continued north sighting San Francisco Bay.  Confused that it was not the described Monterey Bay, they turned south retracing their steps to Carmel Bay where they planted a large wooden cross.  Buried underneath was an account of the expedition in case someone would come upon this position.


Crossing over the hill they again failed to recognize Monterey Bay from the description of Vizcaíno, yet they erected another large cross at the bay with the message, “The land expedition is returning to San Diego for lack of provisions, today, December 9, 1769.” 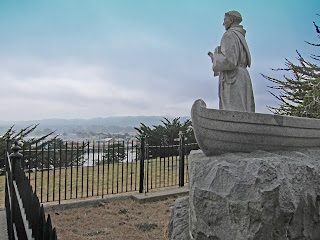 Portolá and Crespí arrived in San Diego January 24, 1770 finding the settlement in far worse condition than when they had left six months earlier.  During their travels they had become convinced that where they had left the crosses was indeed Monterey.  But the San Antonio which was to have brought provisions had not arrived and without sufficient supplies they would not be able to return north to Monterey or continue to establish the settlement in San Diego.


Fr. Serra and Portolá agreed that unless the supply ship returned to San Diego by Saint Joseph’s Day (March 19th), they would have to abandon the settlement and return home to La Paz.   Fr. Serra began a ninth day Novena that would end on the feast of Saint Joseph.  At 3PM on March 19th the San Antonio arrived. 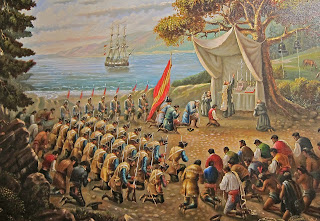 On April 16, 1770, the San Antonio set sail for Monterey with Fr. Serra and Miguel Constansó.  Portolá led the overland division arriving six weeks later in Monterey at the sight of the crosses. The San Antonio carrying Fr. Serra arrived a few days later and on Pentecost Sunday, June 3, 1770, Father Serra celebrated a high Mass under a large oak, the same oak where in 1602, Vizcaíno had claimed the land for Spain.  After Mass, Portolá unfurled the Spanish flag and conducted the ceremonies of possession and establishment in the name of King Charles III.