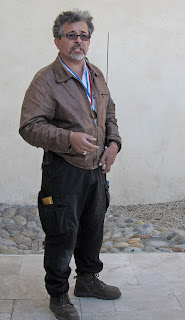 On September 7, 2012, Dr. Ruben Mendoza, archaeologist, writer, photographer and founding faculty member of California State University, Monterey Bay conducted a free lecture on the history and restoration of the Royal Presidio Chapel, San Carlos Cathedral as part of the community educational activities planned in association with the California Mission Ride.

Here are some of the highlights from his tour and lecture.

In 1602, Sebastian Vizcaino of Spain came upon the bay at Monterey and wrote that it was "the perfect port." Time then passed and this "perfect port" became a part of Spanish lore as no one returned to Monterey. Over 150 years later in 1769 Spain ordered Captain Gaspar de Portola to colonize Alta California with a Presidio at the perfect port of Monterey. Father Junipero Serra was given the task of establishing a mission and spreading Christianity to the Native Americans.

The Presidio of Monterey established June 3, 1770, became one of five Presidios (four in California) built by Spain. The destiny of the first Presidio of Monterey, El Presidio Royal de Monte Rey, would rise and fall over the years, it would be moved, abandoned, reactivated, rebuilt and ultimately restored. It would serve as Spain's initial military reservation in Alta California, then under Mexican and finally American rule.

In 1770 an elevated location near an estuary was selected by Miguel Costanso, the engineer of the presidio. A defensive fence of pine logs secured by mud was built to surround buildings for housing, church services and storage. Cannons were mounted at the corners.

Here in a conjectural view of the Royal Presidio of 1820 drawn by Jack Williams, the presidio walls are shown in relation to the current streets of Monterey.

The Royal Presidio Chapel San Carlos Cathedral was also founded June 3, 1770, this by Blessed Junipero Serra. It was built inside the fence walls of the presidio and would become California's first Cathedral, and oldest continuously functioning house of worship in the State of California.

Dr. Ruben Mendoza explained that under 1770 Spanish rule there was no real separation of church and state. "The church would be established in the center of the military compound. Monterey was the military and religious capital of both Baja California and Alta California." 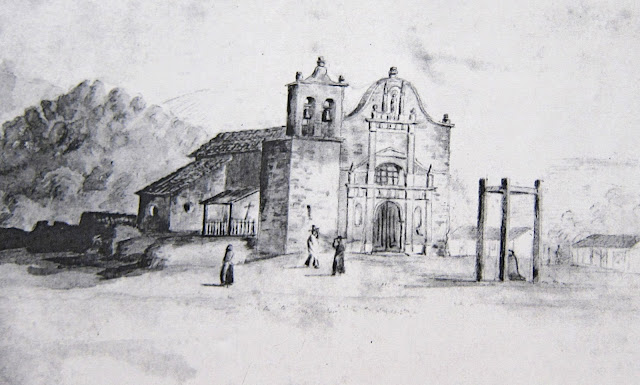 Initially a temporary church of poles, mud and thatch was constructed for religious services until a more permanent adobe chapel could be built in 1771-1772. ﻿

Dr. Ruben noted that by the time the adobe chapel was built in 1772, Father Serra was "referring to the Monterey site as the 'old stand', meaning that he had already moved his original mission from Monterey to Carmel by that time." 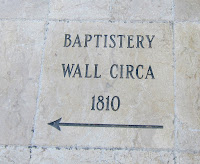 By the late 1780's fires (from errant gun fire) plagued the thatched roof and moisture from the sea air damaged the walls and floor. A stonemason, Manuel Ruiz was commissioned to build a four-sided stone church with a tile roof which was completed in 1794. A baptistery was added in 1810 and sacristy in 1811.

These buildings are no longer standing but their walls were discovered during the restoration and Dr. Ruben points out their location noted by tiles in the ground outside the current cathedral walls.

Dr. Ruben also draws our attention to the bas-relief designed by Manuel Ruiz of Our Lady of Guadalupe over the cathedral door. This he notes is the "oldest non-native sculpture in California." 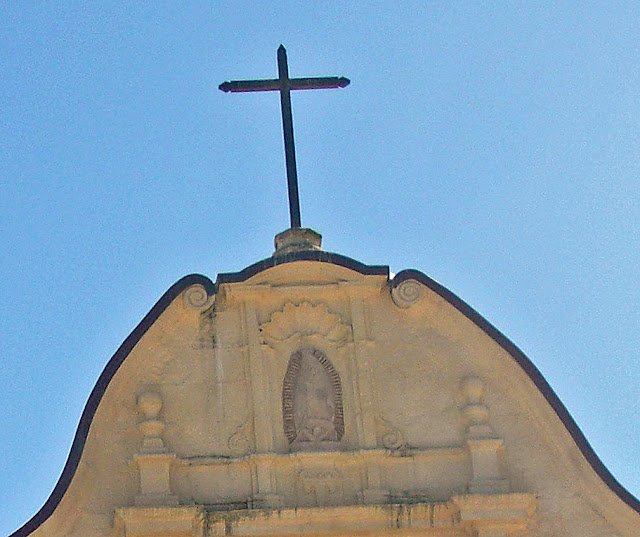 For a short time the presidio chapel would be under Mexican rule and have its status changed from a military chapel to a town parish by 1835.

In 1849, under American rule it would be elevated to a cathedral, becoming California's first Cathedral upon statehood in 1850. 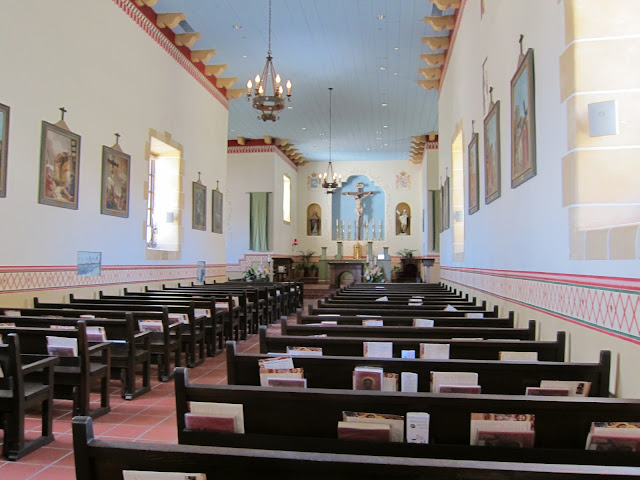 Dr. Ruben takes us inside the cathedral and points out the statue of Saint Anthony. Prior to the restoration, this statue was covered with black soot and the halo thought to be wood. After the statue returned from being cleaned it was discovered that the robe was quite ornate and the halo actually sterling silver. 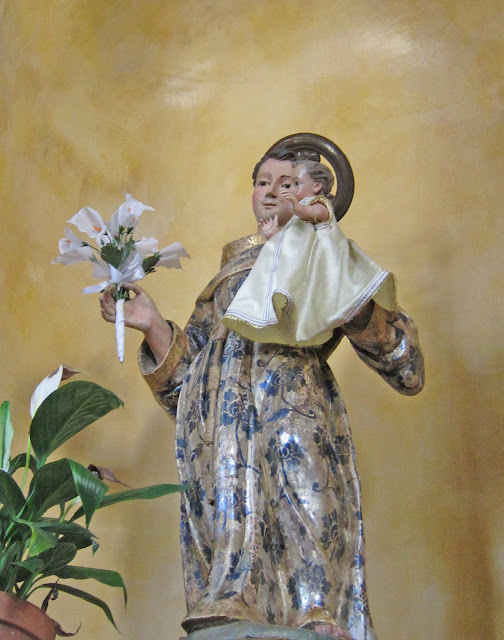 Our attention is called to the cutout in the adobe wall. Behind the glass is original adobe with a decorative painted motif. When the Cathedral was restored the pattern was duplicated on the new walls.

At the front of the Cathedral we cross the threshold of the old chapel to the transept built in 1858 which extended over a crypt. Dr. Ruben explains that in 2008 he was called by the engineers working on the restoration. They had discovered the crypt and asked him to investigate. 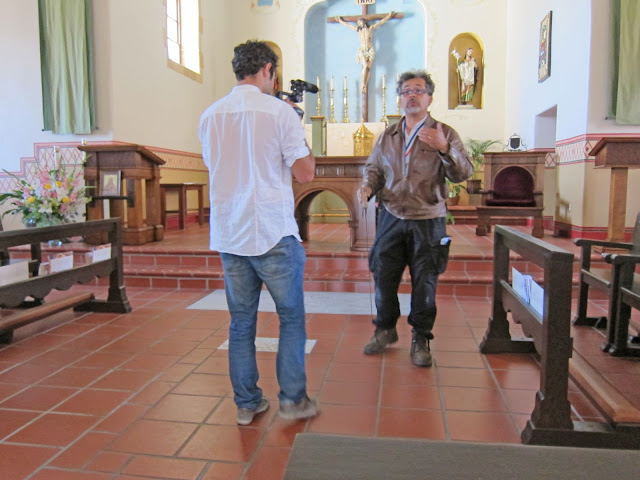 He entered the crypt and "found seven bodies and one open area for another. The crypts were arched in shale or sandstone. They were nine feet deep. There was a wooden cross tacked to a brick wall and over on the far left there was a name, Angelo Casanova. We believe that the crypt was here before the transept was built." 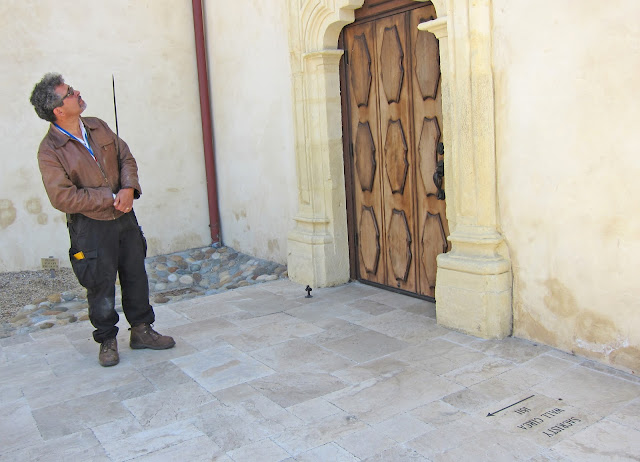 We exit the cathedral through the transept doors.  Dr. Ruben explains that these are the original portadas taken from the 1810 baptistery and 1811 sacristy.  They contain an ornate pomegranet pattern dating from 1800 - 1810. 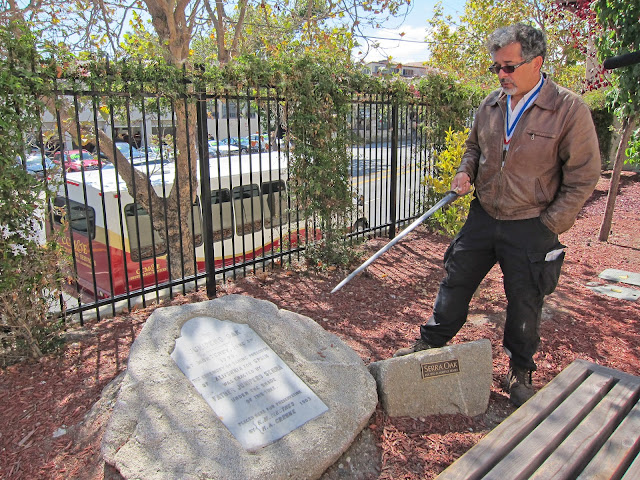 We continued behind the Cathedral to the location of a monument. Dr. Ruben explained that this "was discovered during the course of the grading operation – the trenching and landscaping operation - this stone which was originally installed in 1905 came up in the flower beds – no one knew where it had gone all these years." 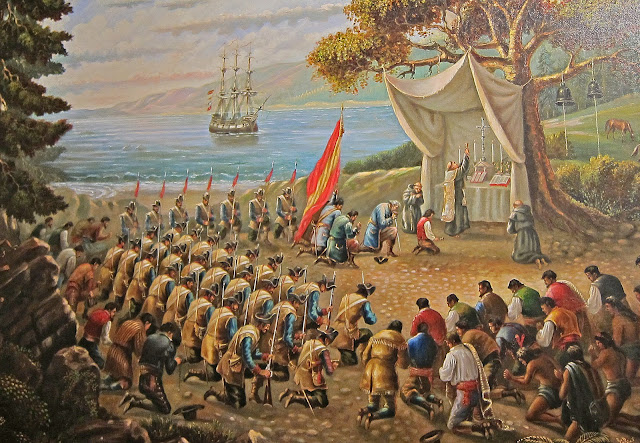 "This is the monument installed to commemorate the Serra Oak which was brought to this spot after it was found floating off Fisherman’s Wharf – it was determined to be the tree under which Serra, and perhaps Vizcaino, conducted Mass.”

By the 1990's it was clear that the Royal Presidio Chapel, now the San Carlos Cathedral was in great need of a seismic retrofit.  In the summer of 2008, Dr. Ruben was called upon to lead the archaeological research team during this restoration.